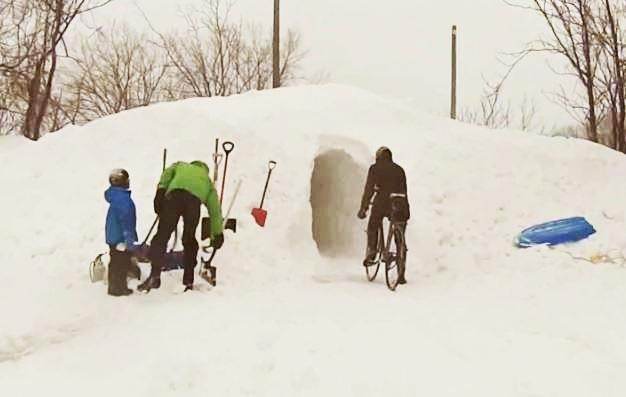 Video: Boston bike path blocked by wall of snow - so cyclists tunnel through it

What do you do if you find your usual bike commuting route blocked by a wall of snow as a result of a huge wall of snow cleared from a nearby car park? Well, a group of cyclists from Boston, Massachusetts, took matters – and shovels – into their own hands and carved a tunnel through out.

Nicknamed Big Dig II, a reference to the city’s $20 billion road tunnel finished in 2007, the improvised tunnel sits on the Wellington Greenway beside the Malden and Mystic rivers and links Boston’s inner harbour to Medford.

Ari Goldberger told BDCwire.com: “One night I’m coming home and suddenly there’s this huge mountain of snow in the way. So I carried my bike over it and took a picture with the bike in front for comparison.”

He went to a nearby station operated by the Massachusetts Bay Transportation Authority (MBTA) to complain, but was referred to the operators of the parking lot. They in turn said removal of the snow was the MBTA’s responsibility.

“Rather than waiting on hold for a million years calling the MBTA, I posted the picture online and said, ‘If nothing is done about this, it’s going to take months to melt.’”

His friend, Shadron Davis, said tongue-in-cheek they should Get some friends together and tunnel through it,” but on reflection she decided it was a good idea.

“I messaged him again to say, ‘You know what? We should go for this.’ So we started mobilizing.”

The tunnel took between eight and ten hours to dig, with shifts spread over several days with the help of friends as well as participants in the city’s monthly Boston Bike Party ride, and this video shows the result.

“I’m somewhat in disbelief that we completed it,” said Davis. “We didn’t run into any impenetrable ice, have a cave-in, or give up. That’s the crazy part!”

Goldberger said: “Whoever has been maintaining the Wellington Greenway, they’ve been doing a decent job so far. So as long as they keep it up, and as long as the MBTA doesn’t box in the path again, I don’t really have any issues with whatever happens.”

But he acknowledged though that there are risks involved in building a tunnel made of nothing more than snow and ice, let alone walking or riding a bike through it, and expressed the hope that whoever is actually responsible for the Wellington Greenway provide an alternative route should the tunnel be deemed unsafe.