The full lowdown of the first two models from Dom Mason, the Resolution and the Definition, plus exclusive pics
by Mat Brett

We had that Dom Mason around here at road.cc HQ on Monday to give us an exclusive first look at the initial two bikes from Mason Progressive Cycles, and here they are.

We showed you a few sneaky snaps of the bikes just before Christmas but this was the first time we’d seen the bikes in the flesh and had the chance to get the full story. 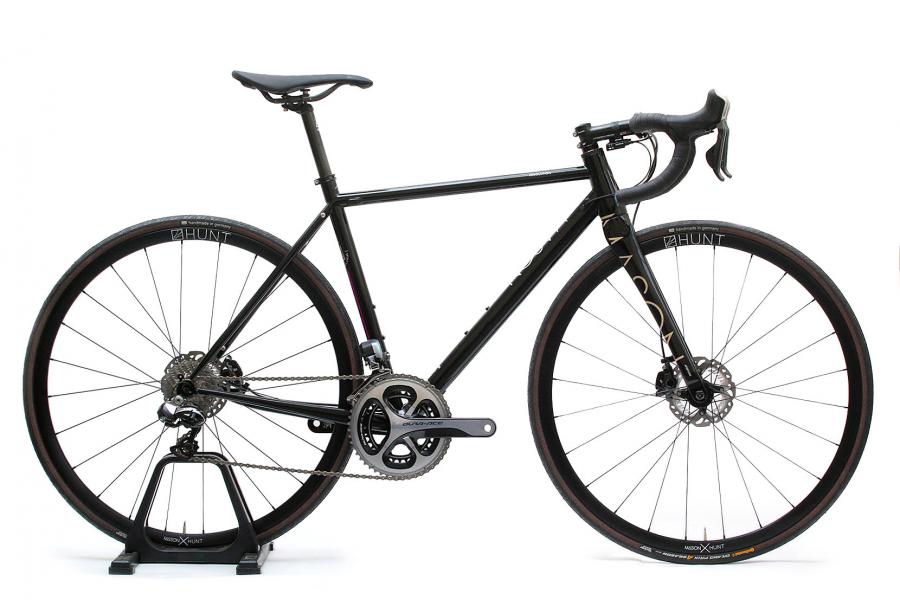 Tell you what, I know you’re pressed for time so here are a few bullet points to get you up to speed before we crack on with the details.

• Dom Mason, formerly of Kinesis UK, has just set up Mason Progressive Cycles.
• The initial offering is one alloy frame, the Definition, and one steel frame, the Resolution, built to the same geometry.
• They’re both designed for disc brakes, come with internal cable routing, and are made in Italy.
• Both have clearance for 28mm tyres and full mudguards, and also have rack mounts.

How should you choose between the two bikes? “They have the same geometry but the different materials put them into different brackets,” says Dom. “The Resolution is the mile-munching smooth steel machine with spring to it, and the Definition is more like a punchy bike for attacking, taking corners fast. They are both designed for a fast spirited ride, with the geometry being suited to long rides.” We've got a whole lot of info so let’s break it down into bitesize chunks.

Innovative use of tubes

Brands will often go to a tubing company and buy a complete ready-designed tubeset, but Dom has been more inventive than that. The almost D-section down tube of the Resolution, for example, is Columbus Spirit steel tubing with walls that taper down to as little as 0.4mm, but it has been flipped so that the opposite edge from normal is at the top.

Dom has used a faceted oval top tube and he has positioned both the seatstays and chainstays in unconventional orientations to get the results he wanted. 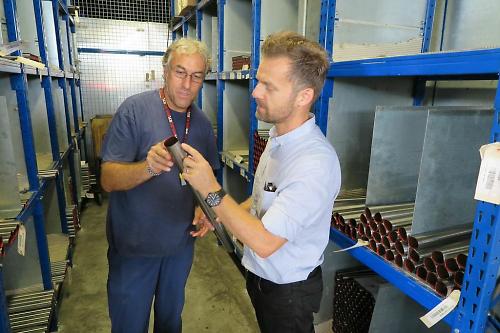 “I spent ages at Columbus in Milan. We were looking at seatstays and they were all too heavy, too straight, the bend was wrong, or they were too low end. Then the guy came back wiping down these tubes that had been in a corner: super narrow road stays that flare out to the hub. I twisted them 180º and found I could get the larger tyre and mudguard clearance that I wanted. They also provided the hourglass profile I wanted for comfort. “It was a breakthrough moment, so I thought I’d keep flipping things and did something similar with the chainstays. We added custom bends to accommodate the disc calliper and rotor. “The big profile down tube means the bottom bracket doesn’t twist and the oval top tube keeps it laterally inflexible. With the hourglass seatstays and fairly deep chainstays, the tubeset does exactly what I wanted it to do.”

The Definition frame is made from Dedacciai aluminium alloy – 7000 Series, triple butted and heat treated.

“I spent a fair amount of time choosing these tubes too. The large diameter down tube keeps things stable and the horizontally ovalised top tube does the same job as the one on the Resolution. The builder has done a beautiful job of making it flow into the top of the seatstays. “Getting the frames right has taken longer than I thought because I’ve done things differently and had to persuade the framebuilders to do things they didn’t want to do, like putting on the disc brake mount and incorporating the MultiPort routing [see below], but I’m very happy with the results,” says Dom.


The Devil’s in the detail

Talking to Dom, you notice that he’s dedicated to getting the details of the design exactly how he wants them. In fact, that’s a massive understatement. He’s obsessed by it. 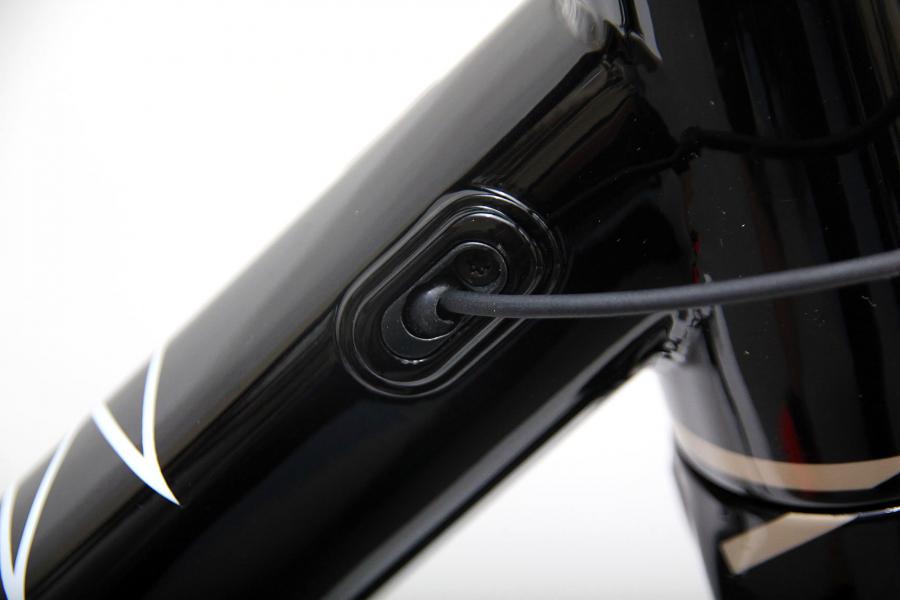 We showed you his MultiPort system before. It uses a stainless steel oval part that brazes to the Resolution’s frame allowing the use of adaptable cable routing. An alloy part is bonded into the stainless steel oval and a flip/flop alloy insert fits in there that allows you to run a wire through for a Di2 electronic gear change system, or a split outer mech cable, a full outer cable/hose, or you can blank off the port entirely. 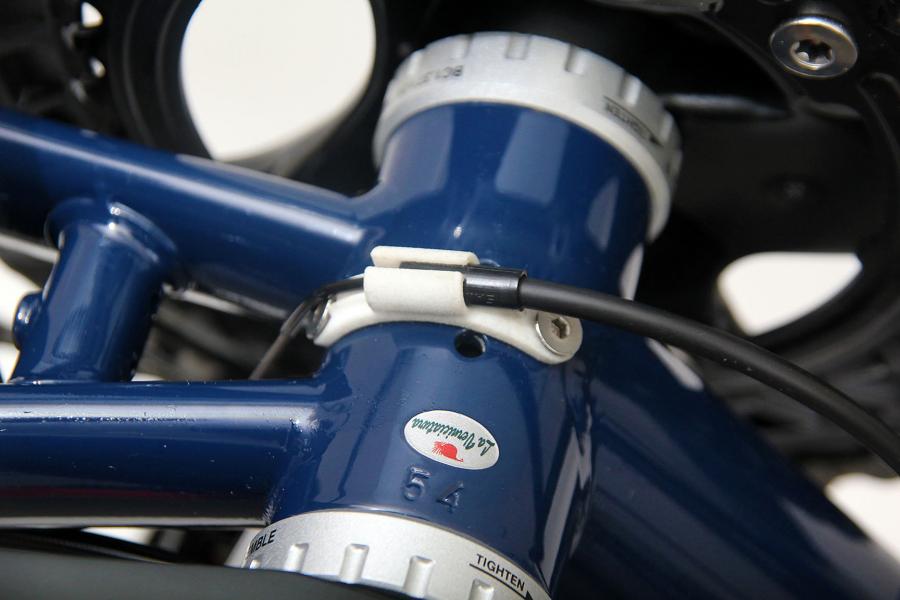 The front mech cable comes out just in front of the bottom bracket and is taken around the BB shell by a small guide that has been designed and made especially for Mason Cycles. It is 3D printed in the UK. The cable stop faces downwards so that it doesn’t collect water and gunk, and it’s removable if you are running Di2. The idea is to keep the shifting precise over the long term. Another clever feature is the Definition’s bottom bracket. It uses a 50mm shell but it steps down for a standard threaded 68mm-width bottom bracket to fit in there. Why? It leaves enough space for the rear mech cable/wire and rear brake cable/hose to run internally, and it also gives maximum weld area for the large diameter down tube. It’s very neat. There are loads of other features that have been similarly meticulously thought through: the staggered positioning of the ports on the Definition’s down tube so that the cables sit neatly, eyelets positioned so that the mudguard stays are straight, a neat little exit plate for a Di2 front mech wire... All kinds of little bits and pieces that add up over the entire frame. 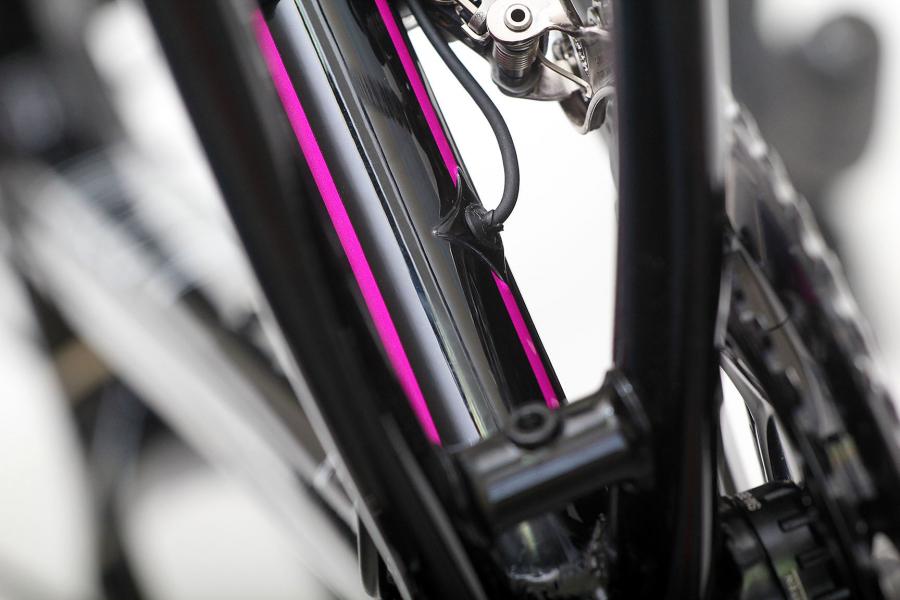 The full-carbon fork fitted to both the Resolution and the Definition is Mason Cycles’ own Aperture design (the pic below shows the various stages of the process from 3 . “The fork I wanted wasn’t available,” says Dom. “I didn’t want a cyclocross fork and every road fork was either the wrong shape, too harsh or too short with not enough clearance. I wanted a square profile [under the crown] so I could fit a square profile mudguard in. If you have a curved profile there it pushes a square profile mudguard down 10mm, I also wanted internal routing, discrete eyelets, a proper taper steerer and my exact crown height, so I bought my own tooling and made my own fork. “It makes way more sense to design the frame and fork in conjunction to complement each other, rather than finding an aftermarket fork and making the frame work with it. 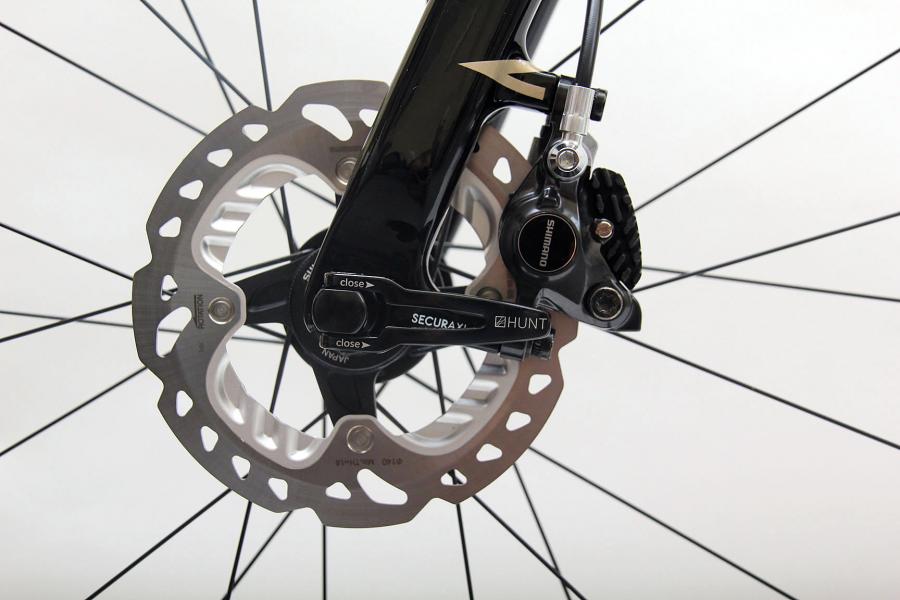 The fork is a tapered (1 1/8in to 1 1/2in) design with what Dom is calling Securaxl dropouts. They’re open (as opposed to thru-axle), forward facing and deep.

The Aperture fork, which unlike the frames is made in Taiwan, can take a 28mm tyre with a full mudguard. It would be a relatively easy job to switch to a thru-axle design if that’s the way the market heads in future, as seems likely.

We told you last month that Mason Cycles have teamed up with new British brand Hunt for the wheels. “As with the fork, I was looking around for wheels for ages and there wasn’t anything that was exactly right for the bikes” says Dom. “They were either too expensive or the right price but too heavy.

“I was talking to Tom Marchment of Hunt and I asked if we would work together. I gave him my ideal wheel build and he did loads of research and got seriously nerdy, sourced the right parts and came up with the right wheels: Tubeless compatible, true disc-specific, asymmetric rims for correct dish with discs, EZO Japan bearings, J-bend spokes with brass nipples, centrelock brakes, nice and light... They have everything that I wanted.”

The finish on each of the bikes looks very high quality. They’re painted in Italy and they go to another Italian facility for the decals. Wouldn’t it have been easier to get the painting and the decals done in the same place?

“Yeah, but the paint factory I’ve used has a really good reputation and the finish is way better than on anything I’ve done before; two coats of lacquer and it doesn’t scratch,” says Dom. “There is one particularly good decal factory in Italy which I knew was the one I wanted to use and they’ve turned out brilliantly.” The steel Resolution has an anti-rust treatment inside too. Because of the way that they’re positioned, the decals are very visible from the side and back of the bike but they disappear almost completely when viewed from the front or three-quarters on.


Looking to the future

Both the Resolution and the Definition should be available to buy at www.masoncycles.cc sometime in March, probably towards the end of the month. They’ll be available as framesets as well as complete bikes. We’ll have more on the Resolution in the next few days because our man Stu took one for an exclusive First Ride and he’ll be back with his thoughts soon. He’s currently cogitating.

So, what next after these initial two bikes make it to market?

“I want to do a sporty adventure bike and a cyclocross bike,” says Dom. “I’ve call the brand Mason Progressive Cycles because I don’t want to do retro, backward-looking products. Everything I do will be using new technology. I love the idea of blending new tech with traditional craftsmanship.

“I would like to have those bikes out by three-quarters of the way through the year in an ideal world. I want to maybe bring some production to the UK at some point too, like doing a steel frame in Sheffield.”

Look out for our First Ride on the Mason Cycles Resolution in the next few days. For more info go to www.masoncycles.cc.