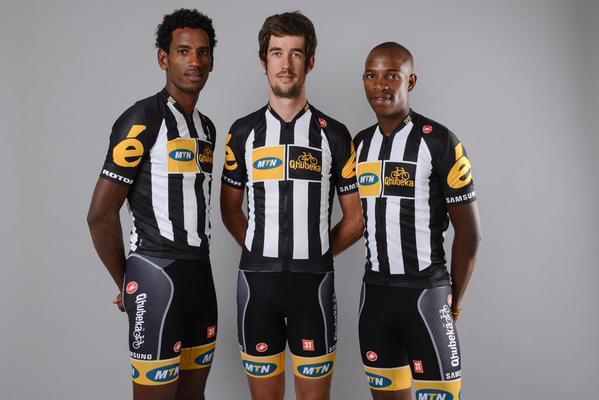 Team co-sponsored by charity that donates bicycles will be first African-registered outfit to ride cycling's biggest race...
by Simon_MacMichael

MTN-Qhubeka will this July become the first African team to take part in the Tour de France after receiving a wild card invitation from organisers ASO, describing the news as “a dream come true.”

Douglas Ryder, MTN-Qhubeka’s team principal, described his reaction to the invitation on the team’s website, saying: “When I received a text message from Christian Prudhomme saying welcome to the Tour de France asking me to call him back, I simply could not contain myself, I shouted to my wife and then things started going crazy.

“I have been waiting my whole life for this news. The pressure over the years of getting partners and riders to believe in this dream is finally a reality.

"We have so many people to thank that have been a part of this journey and I know our riders and staff will be the most motivated team in the world right now ahead of our 2nd training camp starting this weekend.

“We will not only ride in the Tour, we will compete and we will have the support of the whole continent behind us,” he added.

The team’s general manager, former Great Britain road champion Brian Smith, added: “I feel extremely proud to be part of a bit of African Cycling History. It’s been a lot of hard work from many people and today has been very emotional when it was confirmed we would ride the Tour de France.”

He added: “This is a new chapter for MTN-Qhubeka and we hope there will be many more chapters to come. This team is about making a difference and we are looking forward going to the Tour and making sure we make all our partners and supporters happy.”

The team’s co-sponsor, Qhubeka, a charity that donates bicycles to children in rural areas in return for them helping their communites – it has given away half a million bikes in the past decade –  welcomed the news of the Tour de France invitation.

Its executive director, Sarah Phaweni, said:  “This is proof that any dream is possible if you keep moving forward.

“The team has supported and raised awareness for the work we do as a non-profit for many years.

“It is great to have the chance to return the favour as we cheer for an African Team in the Tour de France,” she added.

Founded in 2007, the team’s first participation in a Grand Tour came at last year’s Vuelta a Espana, while its biggest win came in 2013 when Gerald Ciolek won a snow-affected edition of Milan-San Remo.

This year, it has switched bike supplier from Trek to Cervélo, with new signings for the current season including Edvald Boasson Hagen, Tyler Farrar and Mathew Goss.

Four other UCI Professional Continental teams have also been invited to line up when the 102nd edition of the Tour de France gets under way in Utrecht on 4 July – the French outfits Cofidis, Europcar and Bretagne-Seche Environnment, plus Germany’s Bora-Argon 18.

The former Barloworld team, which had strong ties to South Africa where its sponsor was based, took part in the Tour de France in 2007 and 2008, but was registered in Great Britain at the time.