Alex Dowsett has confirmed he is going to have a crack at the Hour record at the Lee Valley Velopark as part of the Revolution Series in London on 27 February, and today his team Movistar have released photos of the specially prepared Canyon Speedmax track bike he’ll use for the attempt.

26-year-old Dowsett will ride a specially modified version of the Canyon Speedmax CF time trial bike, dubbed the Speedmax WHR prototype. The regular Speedmax was introduced a few years ago and is arguably one of the sleekest and fastest looking time trial bikes on the circuit, with angular tube profiles, the integrated front-end with the custom handlebars and stem sinking seamlessly into the top tube of the frame and concealed brakes.

Except there won’t be any brakes on Dowsett’s bike because it has been transformed into a track-specific bike. The frame looks the same with the vertical dropouts replaced with track-specific dropouts, and a new fork slotting in at the front.

Movistar are sponsored by Campagnolo so it’s a pair of Campagnolo disc wheels front and rear and a Record crankset with a power2max crank-based power meter. Continental supply the Competition model tyres. 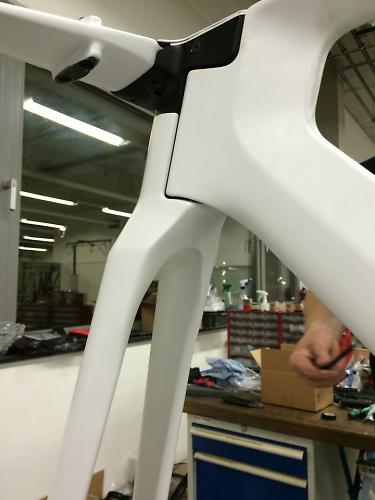 The Hour record has come alive in recent months, with Jens Voigt opening the floodgates with his successful ride back in September on his Trek SpeedConcept. The reason for the sudden rush of interest - and it does seem they’re queueing up now to have a go - is mainly because the UCI relaxed the equipment rules involved in the Hour record. 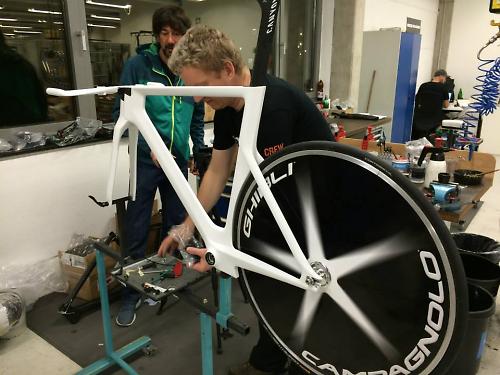 Quite simply, the UCI changed the rules allowing the use of modern track bike design and technology, the new regulations permitting any bike used currently used in endurance track events, like the pursuit, to be used for the attempt. Previously the UCI Hour Record had to be attempted on a traditional drop handlebar road bike with no modern technology, resembling the bike Eddy Merckx rode when he broke the record back in 1972. 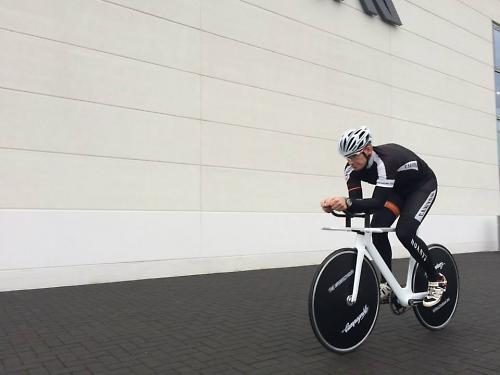 And here's a Canyon employee giving the special bike a shakedown ride outside the Canyon office in Germany.