As ridden by Movistar and Katusha, the German company Canyon's latest time trial bike arrives in the office...
by David Arthur @davearthur

We get a lot of head-turning bikes through the road.cc office, but few have turned as many heads as Canyon’s Speedmax CF 9.0 SL time trial bike. With angular frame profiles, barely any exposed cables and concealed brakes, it’s a strikingly futuristic-looking bike. Even compared to other time trial bikes, the Canyon really stands out.

It sure looks fast too. Just the other day, Alex Dowsett smashed the 10-mile national competition record on one with a time of 17:20mins, and the Speedmax was integral to Nairo Quintana’s victory in the 2014 Giro d’Italia (as was his strength and fitness, of course). 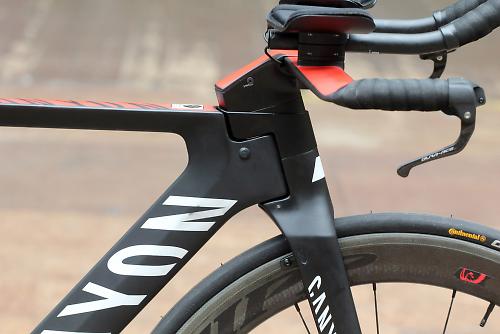 Canyon first introduced the Speedmax as a concept at Eurobike in 2011, and launched it properly the following year. The stiking looks have been generated as a result of Canyon’s development of the Trident tube profile using computational fluid dynamics (CFD) and validation in a wind tunnel. Simon Smart, the same chap who was involved in the design of the Scott Foil, Giant Trinity SL time trial bike and Enve rims, also lent his expertise to the design. 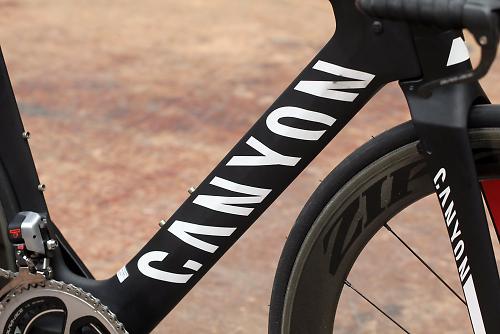 This Trident tube shape features a curved leading edge flowing into an angular, chopped-off tail. Canyon use it right across the frame in all the main frontal surface areas, so that’s the down tube, seat tube, seatpost, seatstays and fork legs. 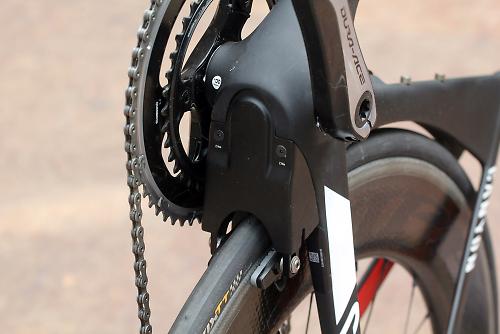 Now is probably a good time to inject some of Canyon’s aero claims in, and they have a load of them. Their biggest claim is that the Trident is 10% less wind resistant than a NACA (National Advisory Committee for Aeronautics) drop-shaped profile. They also say the profile is less susceptible to crosswinds which should make it more stable in windy conditions, and that it is 20% stiffer, which should benefit handling. 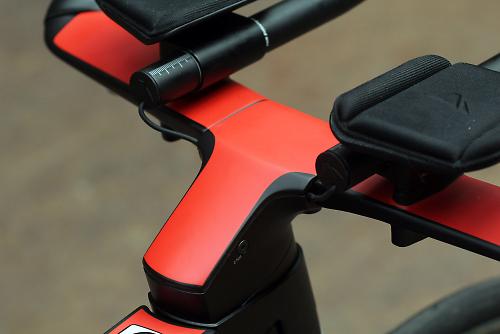 Integration is big in aerodynamics. If you can conceal as much of the bike's mechanics and working parts inside the frame, you can reduce drag. The integration here is impressive, and is clearly one of the defining features of the design. Up front is the fork/handlebar/stem design with Canyon's own-design basebar sitting atop the fork in front of the truncated head tube. 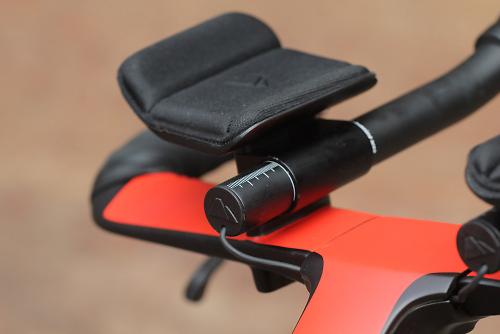 Two cables exit the extensions and disppear into what is effectively the stem. The top plate can be removed and under it are hidden all the cables, including inline barrel adjusters for the brakes, and the Di2 control box. It’s a tight fit, but it is all squeezed inside. This all saves 8 watts, according to Canyon. The seatpost clamp is also integrated into the frame, and easily adjusted with a bolt just in front of the post. 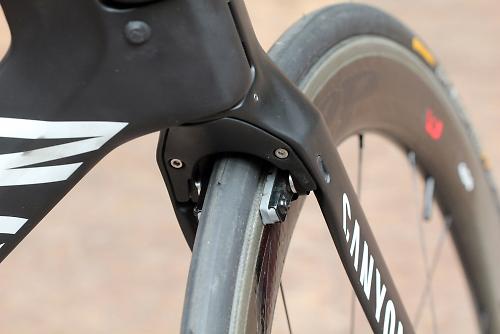 Canyon developed their own centre-pull brake calipers. The front one is concealed behind the fork, and the rear brake virtually disappears down below the chainstays. For the front, brake blocks are adjusted through two ports in the legs, and higher up are on either side are tiny Allen bolts used to centre the brakes.

Adjustability is another area where the Canyon impresses. With the rider accounting for about 80% of the air resistance you encounter when cycling, getting a good aero fit, and one that is comfortable to ride in, is critical, so Canyon offer a stack of options. In fact, they claim thousands of variable cockpit options. 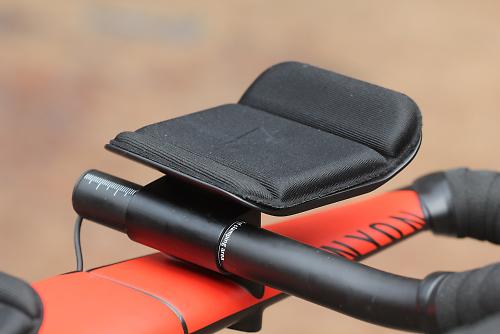 You can change extensions, base bar and stems to tailor the width and height to your requirements. This bike has a raised stem and flat base bar, but there is a flat stem, in different lengths, and a downswept base bar to choose if you want to get even lower.

There are three extensions too, these being the J-bend version. There are different pad widths too and the extensions can be mounted above or below the base bar. It's a bewildering choice.  Seeing as I’m not getting any more flexible, I’m going to stick with this setup for now, but it’s good to know there are such options. 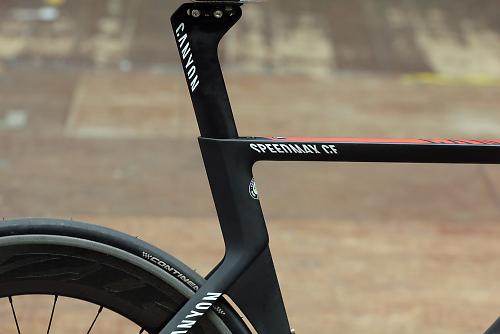 Canyon also offer two seatposts, one is UCI-legal and another steepens the seat angle to 78°, appealing to triathletes who aren't stifled by UCI rules. Our bike has the latter, just because that’s what it came with. Three sizes are available, this is the size small. It has a 499mm stack and 410mm reach, 70mm head tube, 539mm seat tube and 583mm top tube. The wheelbase is 989mm and the chainstays are short at 415mm. The head tube angle is 73.25°. 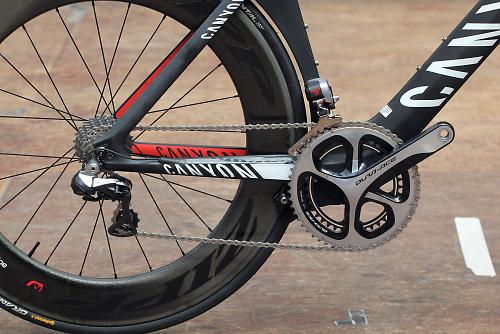 There are five models in the Speedmax CF range, starting from £3,440.87 and topping out with the £6,355.42 CF 9.0 LTD (the prices are so odd because they're converted from Euros and vary according to the exchange rate). This is the Speedmax CF 9.0 SL model, one down from the top, and it costs £5,999. It comes with a full Shimano Dura-Ace Di2 groupset (Canyon only offer Di2 builds with this bike, so it’s Dura-Ace or Ultegra). 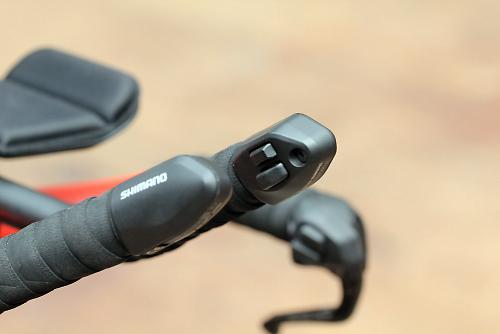 It’s fully equipped with bar-end shifters on both the base bar and aero extensions providing easy gear changes, with carbon fibre brake levers. The battery is hidden inside the seatpost. 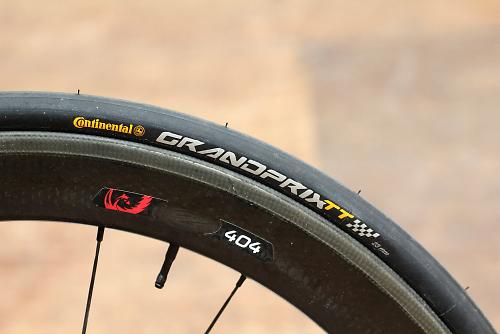 So there you go, a very fast looking bike indeed. We're going to hit the road on it now and enter some local time trials to see how it performs, full review in due course.