Just 100 sets of prints available — and they're going fast...
by John Stevenson

Want some gorgeous bike-inspired art that uses bikes in its creation? These works by Singaporean artist Thomas Yang are made entirely by inking bike tyres, the lines then created as tyre prints.

They sold out quickly so now he's offering 100 sets of all four prints, which might seem to stretch the idea of a site that only offers 100 of anything, but, hey, he's an artist — if he can't break his own rules, whose can be break?

And it means 100 more chances to grab these very striking works. The London drawing — God save the Bike — is of Tower Bridge. Yang says: "Come traffic, hell or high water, nothing will stop London’s rising bike culture, thanks to its protected cycle lanes. Admire its leafy parks and iconic architecture, including the Tower Bridge, meticulously crafted here with 11 unique tyre tracks. Keep calm and ride on." Popping across the channel to Paris and Bicycle Mon Amour features la Tour Eiffel. "Ride down the breezy boulevards of Paris and you'll see why it's easy to fall in love with its cycling culture. The Eiffel Tower was re-created using 12 unique tyre tracks, as a tribute to a romance that goes far, far beyond the Tour de France," says Yang. Half a world away to China and Beijing's Forbidden City is the subject of The Unforbidden Cyclist. Yang says: "Like rice, the bicycle is deeply ingrained in China's culture. Once a sign of backwardness, the "people's vehicle" is now enjoying a hip revival. 11 unique tyre tracks went into creating the Forbidden City – one of which belongs to the legendary Flying Pigeon." 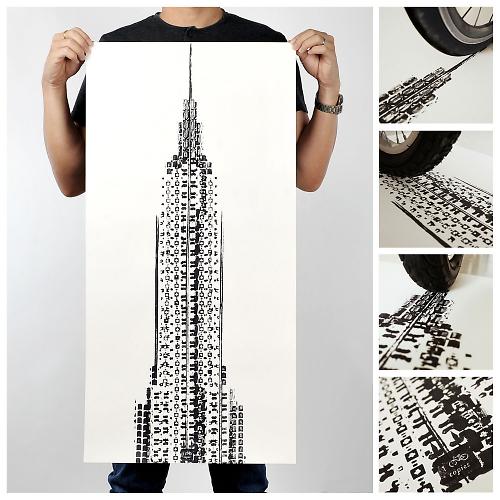 Finally we return - the long way round - to the West and new York City where the Empire State Building is the subject of The Cyclist's Empire. "A celebration of New York’s rise as a cycling city. 7 different types of bicycle tyre tracks were used to create the Empire State Building, to reflect New York’s ever-growing tribe of cyclists – from the daily commuter to the delivery boy," says Yang.

The full set of prints is $360, including shipping from Singapore. More details at www.100copies.net. You better be quick, though, there are just 19 sets left.