The Allez is the bedrock of the Specialized range with bikes priced from £600 up to £2,400, and an S-Works edition at £7,500. A couple of years ago the company introduced the D’Aluisio Smartweld technology, it was only available in an uber expensive S-Works build, but now the genes of that innovative frame have trickled down to more affordable prices. Here’s a look at the 2015 Allez range.

We’re always saying to anyone that will listen, aluminium is a fantastic material for a road bike, and deserves more consideration when buying a new bike. Recent developments have seen the weight drop dramatically along with a real improvement in ride quality, there are now a handful of aluminium frames at about the 1kg mark. And if you think aluminium is harsh, well early frames were many years ago but that's just not the case anymore. A good aluminium frame rivals carbon fibre for performance, weight and more often than not, beats it on price. Talking of weight, the top S-Works Allez weighs a claimed 1,050g, lighter than many carbon fibre frames. 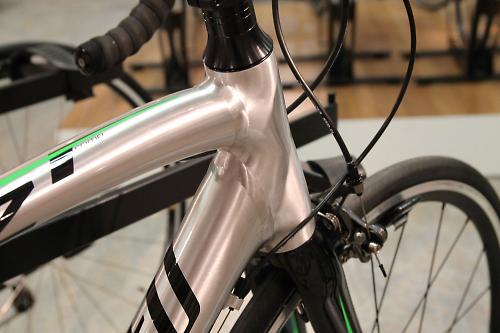 The D’Alusio Smartweld Allez was introduced just a year ago. It started life as an engineering exercise by Specialized’s alloy engineer Chuck Teixeira. He developed a forged head tube with hydroformed main tubes, with the ends of the down tube and top tube rolled and welded in a valley at the head tube. This interface between the tubes aims to boost front-end stiffness and make for a lighter frame. The main tubes are made from E5 aluminium. 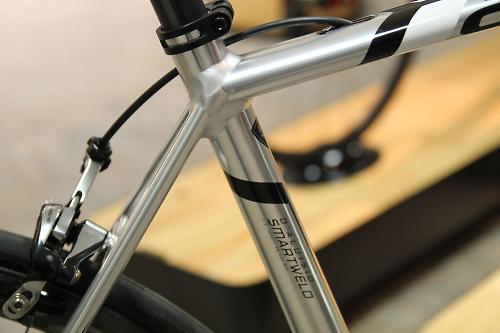 So now Specialized have trickled the Smartweld technology down through the price points. The £7,500 range-topping S-Works Allez gets the lightest 1,050g frame, but you can get essentially the same frame, just a little heavier, on three bikes costing £900, £1,200 and £2,400.

The Allez Comp Race and Allez Comp use the same frame, which differs slightly from the S-Works in not being Di2-specific, instead having externally routed gear cables. The rear brake cable is still routed inside the top tube though. Claimed weight for this frame is 1,150g and you get the same full carbon fork as on the S-Works frameset. The Allez Elite uses much the same frame but a non-tapered head tube with a straight 1 1/8in fork steerer, with a claimed frame weight of around 1,250g. All those weights are very respectable and put many carbon frames to shame. 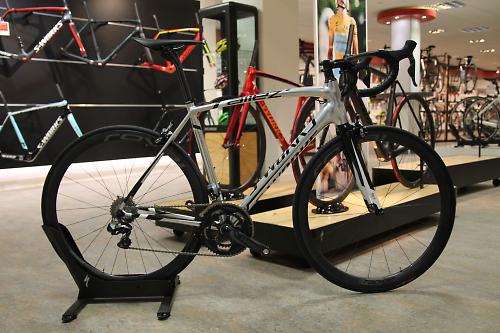 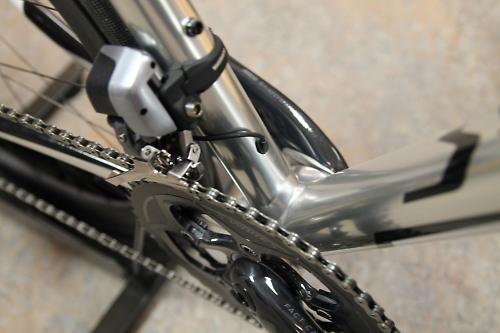 It was parked up alongside a rack full of stealthy black carbon fibre road bikes and it really stood out, it’s stunning looking bike and your eyes are really drawn to that head tube area. If I could have walked out with any bike from the Specialized 2015 range, it might just well have been this bike. 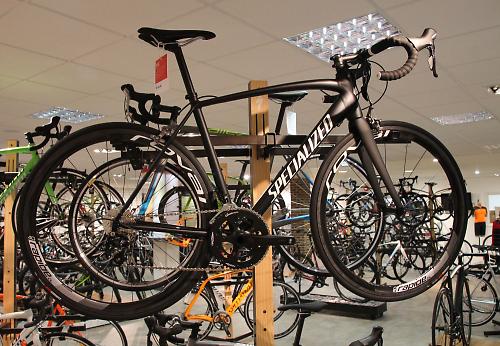 Next up is much more reasonably priced £2,400 Allez Comp Race, which swaps the Di2 groupset for a more modest mechanical Shimano 105 groupset. The gear cables are externally routed so the frame gains a smidgen of weight in the cable guides. 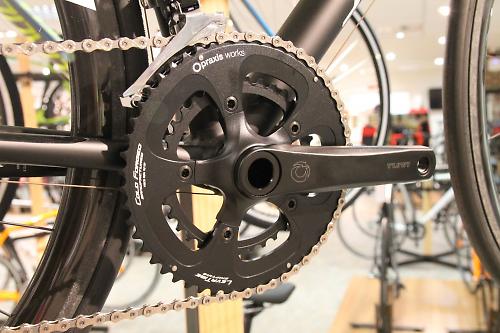 These are the interesting TURN Zayante cranks with Praxis Works chainrings, we've had good experience with the Praxis chainrings so it's nice to see Specialized speccing them. 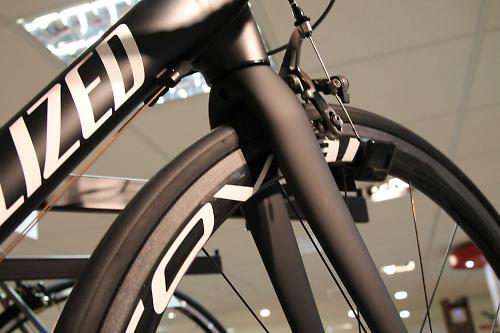 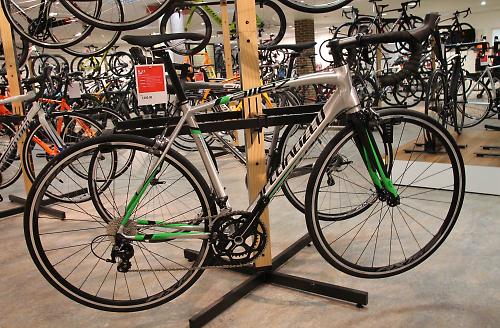 Another rung down the ladder is the £1,200 Allez Comp, and what a fine bike it looks, mirroring the essence of the S-Works Allez quite nicely. The frame is paired with a FACT carbon fibre fork and built with a Shimano 105 11-speed groupset and FSA Gossamer 52/36t chainset and AXIS 1.0 wheels. 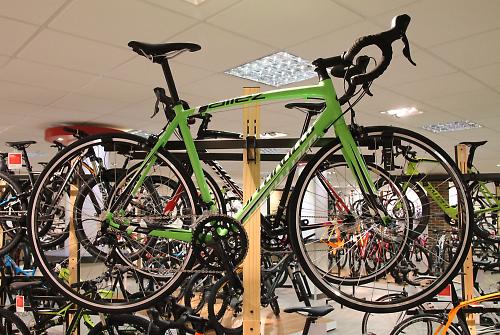 Top of the regular Allez lineup (without the D’Aluisio Smartweld Technology) is the £750 Allez Sport. Don’t worry if this green isn’t to your taste, it’s available in a more subtle charcoal colour too. It's still a very smart looking frame with smooth welds and similar E5 Premium tubing. It's the cheapest model in the Allez range to get a carbon fibre fork. 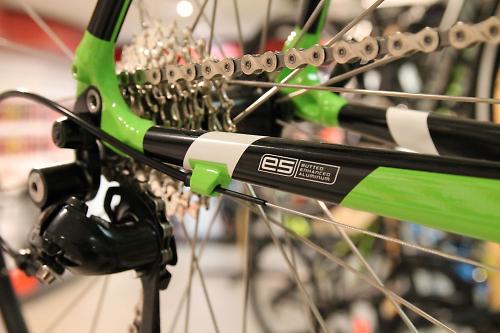 One of the main visual differences is the external rear brake cable and a non-tapered carbon fork. You get a Shimano Sora 9-speed groupset, compact chainset and and AXIS Classic wheels. 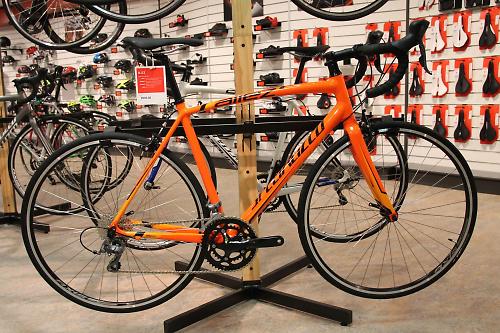 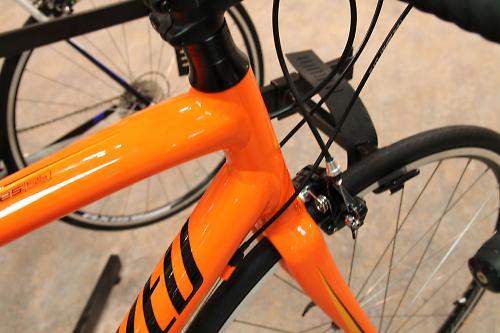 It’s available in three colours too, orange, white or black. 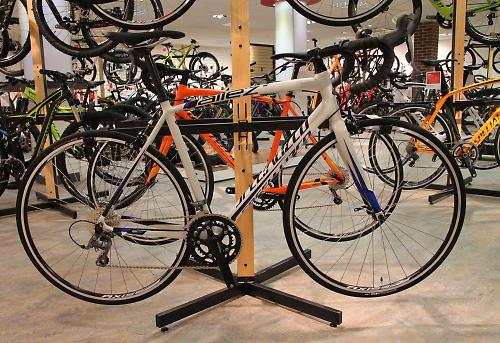 Above is the orange paint job, obviously, and this here is the white flavour. Take your pick. 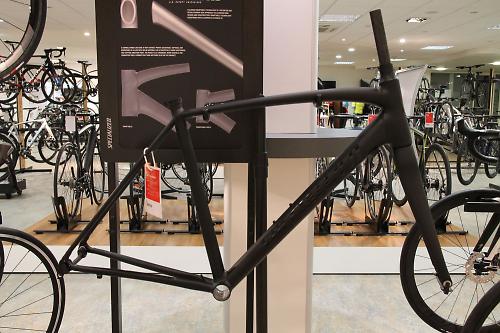 You can also buy the Allez Smartweld frameset, which we know will be an appealing prospect for someone looking to put together a race bike on a budget, and with the likely performance of the frameset we reckon it’ll be more than adequate for such demands. There are two versions, the Allez E5 Smartweld at £800 and the S-Works Allez frameset which costs £1,500, the latter is Di2-specific and so is a bit lighter. 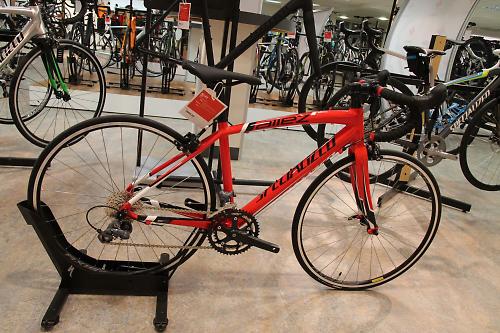 A brand new model for 2015, this is the Allez Junior 650. It features an A1 Premium aluminium frame with smooth welds and an aluminium fork, AXIS Classis wheels and Shimano 2400 Claris groupset. A smart choice and it costs £600.