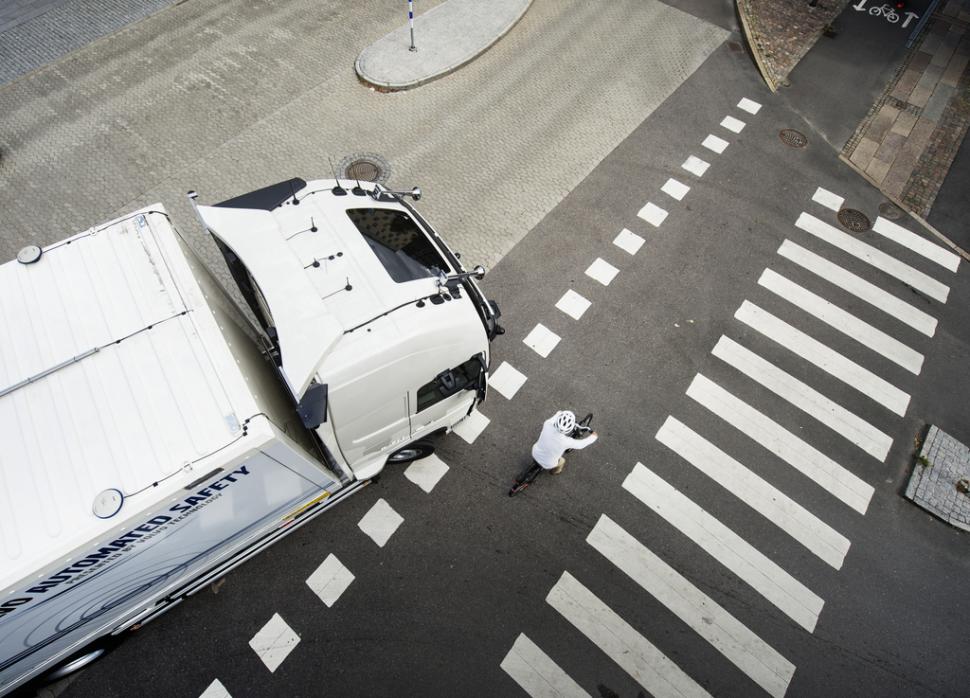 "Our vision for traffic safety is to have no accidents" says truck maker...
by John Stevenson

Motor vehicle manufacturers have announced various systems to help drivers of their cars avoid collisions, especially with vulnerable road users such as cyclists and pedestrians. Volvo's truck division has announced a system for larger vehicles which, the company says, pose a whole different set of problems.

The system works “works much like the human mind,” Volvo says, using data from a range of sensors, radars and cameras round the vehicle and feeding information to the driver to help avoid a collision."

Here's a video featuring a man with a very deep voice explaining the system.

Despite making their small numbers, trucks and other large vehicles are involved in a disproportionally large number of collisions in which pedestrians and especially cyclists are killed or seriously injured.

“Unprotected road users such as pedestrians and cyclists are especially vulnerable in urban areas where a lot of large vehicles move around,” said Carl Johan Almqvist, Volvo Trucks' traffic and product safety director.

"This technology enables a vehicle to ‘see’ its complete surroundings and feed information to the driver on how to avoid accidents. And if the driver does not respond to the suggested actions, the steering or braking system can be activated autonomously.”

"Our vision for traffic safety is to have no accidents involving Volvo trucks," said Almqvist.

Volvo's collision avoidance research, snappily-named Non-Hit Car and Truck Project, has been running since September 2010 and will wind up this December.

However, it will take five to ten years for systems such as this to hit the market. "We have the main components in place, but we need to do a lot more testing in order to make sure that the system is fault-free. If we manage to solve these challenges, a future without truck accidents is within reach," said Almqvist.

That's partly because the weight and loading of trucks makes automatic control more complicated that with cars.

"Trucks are a different type of vehicle and do not act the same way as cars in traffic. Each truck is loaded differently, for example, and their large size prevents them from carrying out severe avoidance manoeuvres - such as swerving quickly to avoid a collision. So it is important to research and develop technology specifically for trucks," says Mansour Keshavarz, systems engineer at Volvo Trucks.

Nevertheless, the day such systems are installed in all trucks can't come soon enough.