Sweden-based carmaker's technology combines radar and camera to anticipate collisions - and avoid them...
by Simon_MacMichael

Sweden-based car maker Volvo has formally unveiled its Cyclist Detection System, which enables vehicles equipped with the technology to detect when pedestrians and cyclists are present and apply an automatic brake in situations where a collision looks likely. The innovation was unveiled at the Geneva Motor Show earlier this week.

Volvo says that collisions with cars account for half of all cyclist deaths in Europe, and that reducing the speed of the vehicle is an important factor in cutting the number of fatalities. It believes that its Cyclist Detection System, which will be incorporated within a similar system launched two years ago aimed at protecting pedestrians, can help reduce the death toll.

While Volvo’s technology, which is based on software that processes information from a radar unit in the car’s grille and a camera fitted ahead of the rear view mirror to anticipate collisions does appear to be a step in the right direction, to make a real difference, other manufacturers would have to follow suit with their own similar initiatives, assuming the Swedish company doesn’t licence its system.

Doug Speck, Volvo’s Senior Vice President Marketing, Sales and Customer Service commented: "As the leader in automotive safety, we have been first in the industry with all detection and auto brake technologies, from the first-generation brake support in 2006 to pedestrian detection with full auto brake in 2010.

"Our solutions for avoiding collisions with unprotected road users are unique in the industry. By covering more and more objects and situations, we reinforce our world-leading position within automotive safety. We keep moving towards our long-term vision to design cars that do not crash," he added. 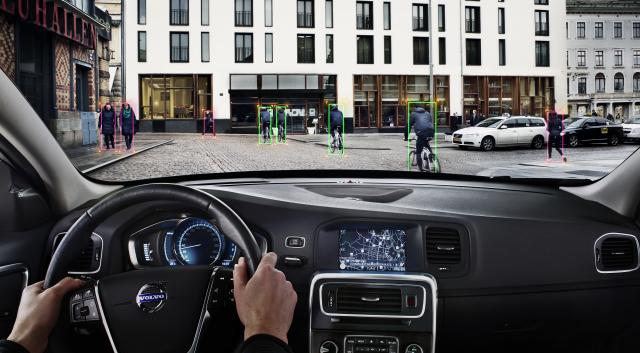 A cyclist in the same lane swerving out in front of the car is one incident type that is addressed by the Pedestrian and Cyclist Detection with full auto brake, which will be available in the Volvo V40, S60, V60, XC60, V70, XC70 and S80 models from mid-May in 2013.

The advanced sensor system scans the area ahead. If a cyclist heading in the same direction as the car suddenly swerves out in front of the car as it approaches from behind and a collision is imminent, there is an instant warning and full braking power is applied.

The car's speed has considerable importance for the outcome of an accident. A lower speed of impact means that the risk of serious injury is significantly reduced.

Previous safety innovations from Volvo highlighted here on road.cc include an external airbag announced last year that is designed to protect vulnerable road users including cyclists and pedestrians in the event of a collision, and, in its commercial vehicle division, and a system aimed at eliminating blind spots from large vehicles such as lorries.