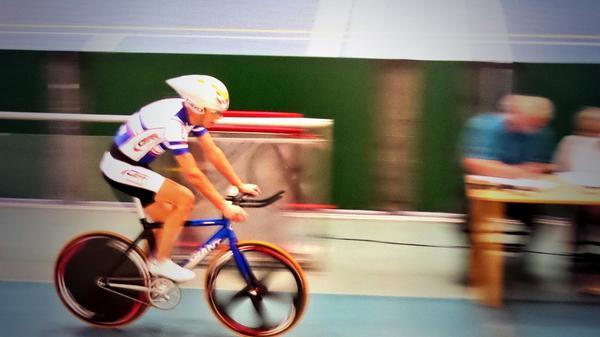 The Hour record is back in vogue, with Sir Bradley Wiggins confirming earlier this week that he plans to try and beat the distance set by Jens Voigt last week – but a few days before the German’s storming ride, a grandfather from a cycling club in Stockport got his name into the record books, setting a new benchmark for the 70-74 age group.

Mike Cotgreave of Westmead Team 88 rode 41.227 kilometres at Newport Velodrome in Gwent on Sunday 14 September – a shade under 10 kilometres less than the 51.115 kilometres Voigt rode to establish his record.

That’s an impressive performance considering Cotgreave, aged 70, was ceding 27 years to the younger man – and that at 45 when he took up cycling, he was two years older than Voigt is now.

Pushing a gear of 53x15, Cotgreave rode 164.9 laps of the Welsh National Velodrome, bettering the previous record of 39.635km held by Frans Braat of the Netherlands by 1.592km.

To prepare for his attempt on the record, he spent eight months training five days a week under the supervision of Olympic, Commonwealth and World Championship medallist, Bryan Steel.

The rider was cheered on in his successful record attempt by friends and family including his grandchildren and his son Andy, who tweeted some photos, including these before and after shots.

Here's my dad. He's about to attempt to become the world's fastest 70yr old on a bike at @WalesVelodrome. Go Pops! pic.twitter.com/YyrJ3gTRzx

In January, the French centenarian Robert Marchand bettered his existing Hour record for riders aged 100 and over – an age group the UCI created especially for him - by riding 26.925km, despite having passed his 102nd birthday.