Earlier this year we reported on the Australian company Fly Lites and their combined rear light and camera Fly6, which they launched through the popular Kickstarter crowd-funding website. It didn’t take long for them to smash through their $95,000 goal, in the end they reached a staggering $266,594.

With that goal reached the Fly6 light has been put into production and they were at the recent Eurobike show in Germany to show the light off to the world’s media. We had a good gander at the product for the first time since we wrote that first article, and the good news is they haven't rested on the laurels. In fact they’ve pretty much completely overhauled the combined light and camera since we first reported on it back in the spring. 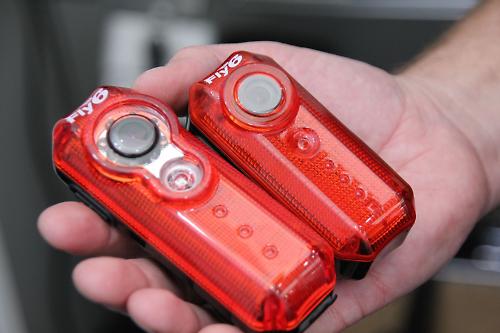 As you can see from the photos (the new one is on the right) the latest version is a good deal smaller than the first product. The changes don’t end there, they’ve also increased the camera quality, now capable of recording 720p HD video and audio. The battery life has been boosted up to a claimed 6 hours as well, and it’s easily charged via a USB lead. The whole unit is waterproofed with a nano-coated exterior to help it shrug off water.

Oh, and they’ve also ramped up the brightness of the light too, taking it from 15 to 30 lumens, so you should stand out on the road quite a bit more now. There are a range of mounts available, it’ll even fit an aero seatpost. It’s pretty light at a claimed 105g.

The light costs £99 which, when you look at the cost of a decent camera and light separately, does appear reasonable. There’s been a huge surge in the number of cyclists recording their daily commutes but most are concerned with forward-facing cameras, so there’s a bit of a gap in the market for a rear-facing camera. And one that combines a rear light as well is fairly unique.

Which all looks rather good. We've got one of the current models on test at the moment so watch out for a review soon.

1
Shimano takes over Tour de France neutral support from Mavic
2
Near Miss of the Day 522: Land Rover driver in pointless close pass
3
Five cool things coming soon from Assos, BTWIN, Quintana Roo, Cadex and Iris
4
Cyclist crushed after farm worker failed to secure straw bale to trailer, court told
5
Police investigating cyclist Tony Parsons' disappearance confirm his body has been found
6
Near Miss of the Day 521: Close pass ... by a police van (plus how it all went a bit Kafkaesque afterwards)
7
eBay seller refuses to accept bike auction offer – says "would be unhappy if I sold to Scouser"
8
Council has "no intention to enforce" parking restrictions in segregated cycle lane where cars are parked bumper to bumper