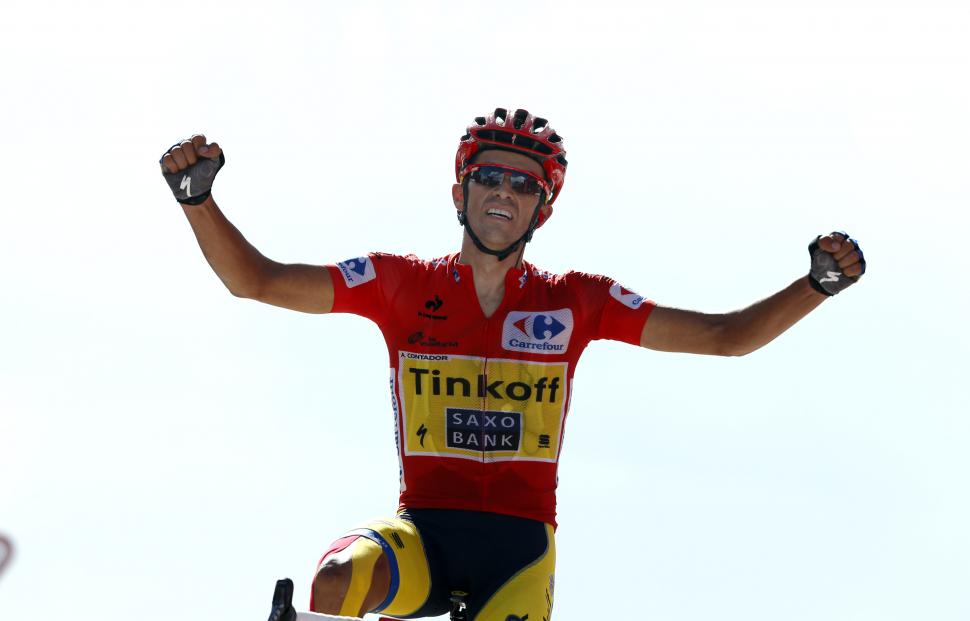 Alberto Contador of Tinkoff-Saxo has won the Vuelta a Espana for the third time, finishing the three-week race 1 minute 10 seconds ahead of Team Sky’s Chris Froome, with Alejandro Valverde of Movistar a further 40 seconds back in third place.

Froome finished 63rd today, 1 minute 13 seconds back on the stage winner and took 27 seconds back on Contador, winner of the race in 2008 and 2012, but on such a short course there was little prospect of overturning the Spaniard’s lead.

It’s the second time that the Team Sky rider has finished second in the Vuelta, following his runner’s-up spot to Juan Jose Cobo in 2011.

Alberto Contador, winner of the 69th edition of the Vuelta

“I still have in mind a sentence that medical experts told me after my crash at the Tour de France: I wouldn’t have time to recover for the Vuelta but I’ve done all I could to prove them wrong. The day after my accident, I was already trying to do some exercises with my muscles.

"I didn’t think I was coming to the Vuelta and being able to fight for GC but in three weeks, I’ve had time to come back to the required level. The first time I’ve told myself that the overall win was reachable, it was at Valdelinares (Stage 9). Until then, I was struggling but I’ve been lucky to always be supported by my team in the key moments, for example on the day when echelons were formed (Stage 4).

"The time trial at Borja completely changed my views on the race. All my three overall victories at the Vuelta are special. The first one in 2008 allowed me to get the triple crown (Giro, Tour, Vuelta). In the second one in 2012, I wasn’t at the top level and I made it thanks to a crazy tactic on stage 17 to Fuente Dé. For this one now, after my crash at the Tour de France, I couldn’t prepare as I wanted to. Firstly I survived, then I attacked.

"Winning against the best riders, that’s what I love. The greatness of a race comes from its participation. We all fought for winning. It’s a bit early to talk about 2015 but I have a dream: to take part in the three Grand Tours. I don’t know if I can do it one day. I don’t want to make any plan tonight but I’d love to know that it’s possible.”

"I lost time to Contador in time trialling but it’s not a source of concern. I know how I came into this race. I definitely rode myself in. The Vuelta had a really high standard this year, I’m happy to have been part of it.

"I definitely owe this result to my team-mates. They’ve been behind me, they’ve supported me throughout the race, even when I had a few bad days earlier on in the race and I think that paid off. I was able to come away with the second place which, given how I came in, I can be happy with that.

"I have no regret at all on how the race unfolded. I did everything I could. I raced to the best of ability. As a team, we really pushed together. I don’t think any of us has any regret. Alberto was really impressive in this Vuelta. If I’ve learnt anything about racing against him, it’s to not let him get any time because I might never get that time back. I definitely look forward to see what’s the Tour de France route will look like but for now, I’m very happy to finish it off and looking forward to a good winter break.”

“I’m very happy with this victory. I wanted to try and go for it today because of the withdrawals of Cancellara and Martin, there was space for someone like me. What I did today is good signal for the world championship. I can’t beat Tony Martin, unless he punctures or something but I can target a top 5 if everything goes well.

"Today I had one of my best days of the year against the clock. I felt it and the watts I pushed also showed that I was going well. I’ve also been lucky to avoid the rain. I was scared that Froome could beat my time but on a wet surface, I believe he didn’t take any risk. After what happened with Nairo, we are delighted to come out of the Vuelta with three stage wins and Alejandro Valverde’s third place overall.”