The new Trek Émonda SLR 8 weighed in at 6.27kg (13.79lb) on the road.cc Scales of Truth, since you ask. That’s the 58cm model. Most conversations about the Émonda start with weight, so we thought we'd tell you that right away.

We told you about the Émonda when we went to the launch back at the start of July and we got the chance to take the bike for a First Ride over part of the route for Stage One of the Tour de France. Since then the bike has been used by Trek Factory Racing throughout the Tour, and now the Émonda SLR 8 has arrived at road.cc for a full review. 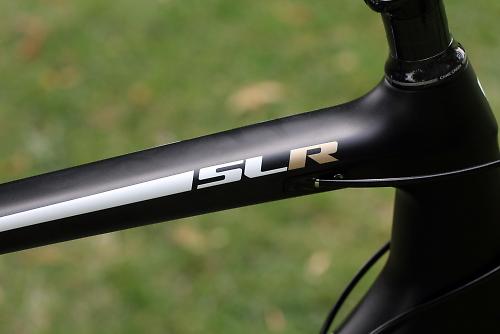 Bike brands sometimes get frustrated by the amount of talk there is about weight compared to other important parameters, but it’s fully justified here because Trek say that they’ve prioritised saving weight above everything else in the design of the Émonda. They boast that the range, which has been 2 1/2 years in the making with input from Trek sponsored riders, is “the lightest production road line ever”. To put that in context, Cannondale’s superlight SuperSix Evo is 710g. Okay, so a 20g weight saving is tiny but it gives Trek the bragging rights for the time being.

How have Trek managed to produce a frame this light? Well, as we’ve said a zillion times before, making a lightweight frame is really, really simple. Take any old frame and an angle grinder and you’ll get there in the end. The trouble is, you might just end up with something that flops around like a caught fish when you climb on board. 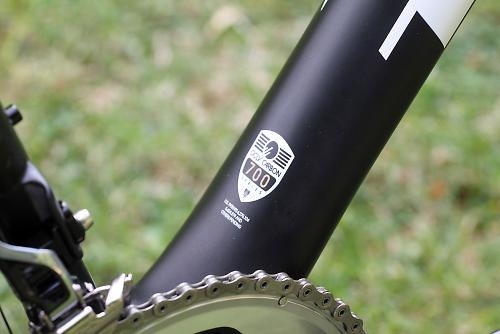 Trek reckon that the Émonda boasts the most sophisticated tube optimisation of any bike ever, with both the tube shapes and the laminate being designed to produce the highest stiffness-to-weight ratio possible. In plain English, they say that they’ve got the best out of the carbon fibre through clever engineering. 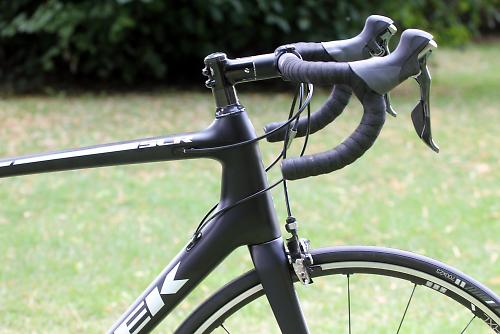 So, for example, the down tube is massive, especially across its width, and the bottom bracket is built to an oversized BB90 standard. The E2 head tube houses a 1 1/8in bearing at the top but the lower bearing is 1 1/2in for greater stiffness – which is something that Trek have done on other bikes before. You have all of these big frame elements but, in contrast, the upper wall of the top tube is so thin that you can actually press it inwards slightly if you squeeze it hard between your finger and thumb (don’t worry, you won’t dent it like that).

The point is, Trek say that they have put the carbon-fibre where it’s needed to provide the stiffness, but removed it from everywhere else to keep the weight down. Actually, every brand says that, it's just that Trek seem to have taken things to the extreme here. They’ve also worked hard on integrating features into the frame mould to reduce the amount of material they need to use and, therefore, keep the weight down. The carbon front mech mount, for example, is a part of the frame rather than something that has been bolted on afterwards. The same goes for the bottle cage bosses. They use direct-mount brakes on the Émonda too, with the arms bolting straight onto the frame and fork rather than through a central mount. The idea is that this reduces the number of parts involved as well as improving the braking performance. 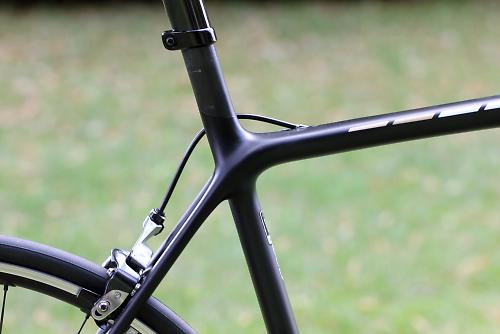 The SLR and SL frames come with Trek’s Ride Tuned seatmast rather than a standard seatpost. Instead of a post that fits inside the seat tube, the seatmast fits over the top of an extended seat tube. Trek say that they can use less material at the seat junction because they’ve eliminated the usual seatpost clamping forces, saving more precious grams. 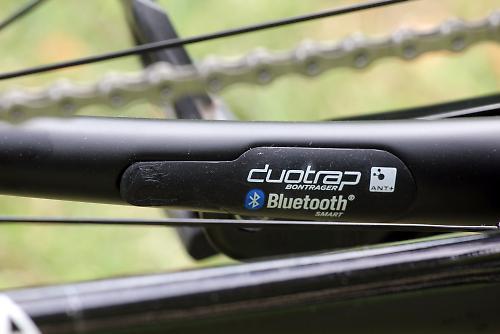 The Émonda is fitted with a 3S chainkeeper to stop the chain dropping off your inner chainring and damaging the frame, and there’s a hole in the non-driveside chainstay for a new DuoTrap speed/cadence sensor that is both ANT+ and Bluetooth compatible. If you don’t fit one, the hole is masked by a rubber cover.

There are five complete SLR bikes in the range, starting with the Shimano Ultegra-equipped SLR 6 at £4,300. Next up comes the SLR 8, the bike we have here, at £5,800, with a mechanical Shimano Dura-Ace groupset. 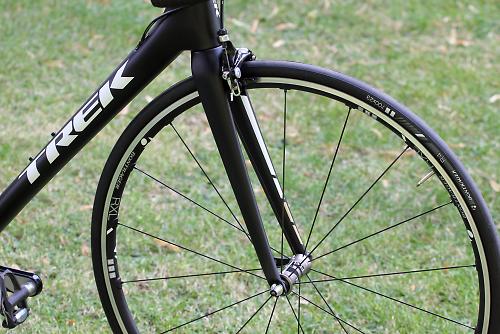 There are both standard and WSD (women’s specific design) versions of the Dura-Ace Di2 SLR 9 (£7,800), and the range tops out with the superlight Émonda SLR 10 at a whopping £11,000. That bike comes with a SRAM Red 22 groupset and Tune wheels, and Trek reckon that it’s the lightest complete production bike available. How much do you reckon it weighs? We’ll tell you: 4.6kg (10.25lb) for a 56cm model. That’s nuts! The most affordable Émonda in the range is the Shimano Tiagra-equipped Emonda S 4 at £1,200. The S frame is very different from the SLR. We’ve already mentioned that it’s made from a different grade of carbon, it also has a different bottom bracket design (BB86.5), standard callipers rather than direct-mount brakes, a standard seatpost system rather than a Ride Tuned Seatmast, external cabling, and so on. It still has the E2 head tube and fork steerer, though, and the same geometry as the SLR 8.

Trek have also added the Émonda SLR (standard, WSD and Team Editions) to their Project One custom bike programme, allowing you to choose your own paint job and components. 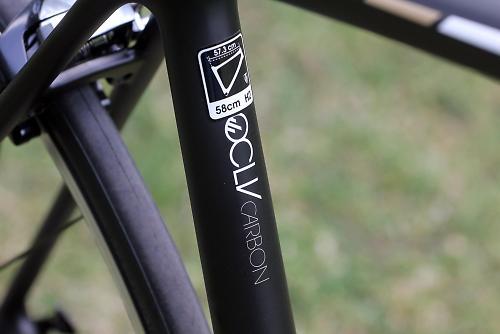 Our SLR 6.8 is built to Trek’s H2 geometry because that’s what Trek had available when we asked for a lend, although it’s also available in H1. If this makes no sense to you, the simplest way to describe H2 is that it’s very much a race fit, but it’s not as aggressive as Trek’s low and aero H1 fit.

Go for an H1 fit and you’re talking about a 56.7cm stack (2.9cm lower), a 40cm reach (0.9cm longer), and a 16cm head tube (3cm shorter). I quickly jumped on our review bike when it arrived and it did feel like the front end was tall (horses for courses, naturally) but there’s a whole stack of headset spacers underneath the stem so they’re coming straight out. I’d far rather have the taller H2 head tube with no spacers than the shorter H1 head tube with spacers, by the way, for the extra front end stiffness that should result. 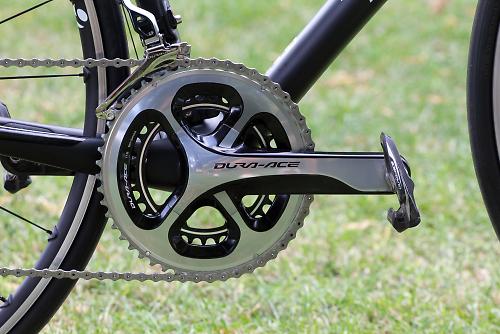 The SLR 8 is built up with a full Shimano Dura-Ace mechanical groupset, as mentioned, including the direct-mount brakes. The chainset is a compact which seems like a strange choice on such a high-end bike. I’d have thought most people would be far happier with the 52/36T semi-compact that Trek spec on the SLR 9 and the SLR 6 but I guess they know their market. We gave you the weight right up at the top: 6.27kg (13.79lb). It’ll be slightly lighter if you need a size smaller than 58cm. Something that won’t be different is the ride quality, according to Trek. They say that the range has “size-specific ride-tuned performance” meaning that the bikes feel the same regardless of size.

Once you have your pedals and bottle cages fitted, the SLR 8 will still be considerably under the UCI’s 6.8kg minimum weight limit for racing so you’re going to have to strap some lead on somewhere for your next Grand Tour. 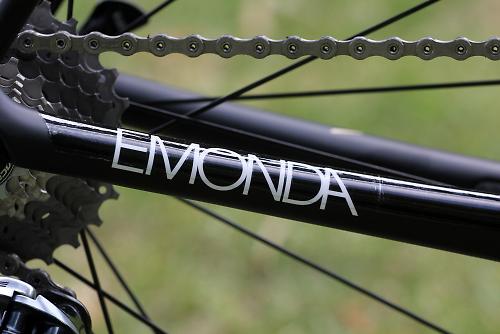 One quick final point: Trek’s Madone road bike remains very much alive. The Émonda isn’t designed to supersede the Madone – or the Domane, come to that – they’re intended to sit alongside one another in the range (there’s no truth in the rumour, by the way, that Trek got a job lot of a, d, e, m, n and o stickers and they don’t want to shell out on any others). The idea is that if you prioritise lightweight you go for the Émonda, if you want an aero road bike you go for the Madone, and if you want comfort you’ll pick the Domane. And if you’re absolutely loaded, you can presumably go for all three.

Hang on, though! I can hear hills are calling again. It often happens at about this time of day. I’d better fill up a couple of water bottles and get out of here. Look out for a review on road.cc soon and check out the full range at www.trekbikes.com.