You'll be happy to know that it's faster than the last one...
by dave atkinson

There’s a few brand new bikes debuting at the Tour de France this year, and earlier today we popped down to Evans Cycles in Leeds to take a look at another one: the Fuji Transonic. 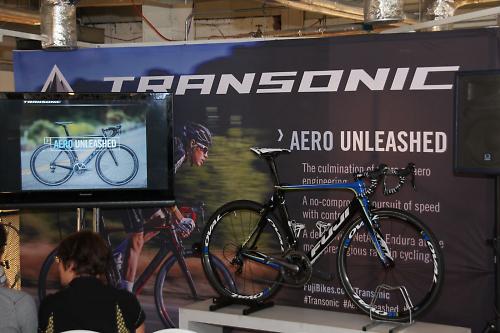 Two years in development, the Transonic is a new aero bike that has built on the work that Fuji undertook to develop the Norcom Straight TT bike and the Track Elite track bike. “We learned a lot on that project [both bikes were developed together] with many hours in the wind tunnel”, Fuji’s road product manager Steve Fairchild said. “The SST was our most-loved bike and our first aero road frame, but we needed to take the development to the next level.” 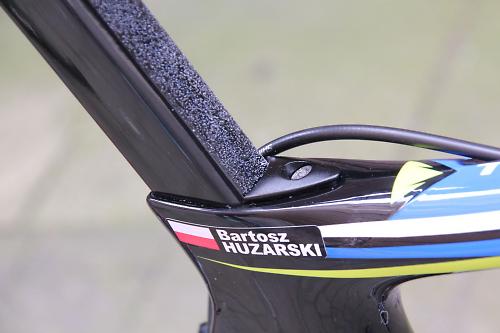 Some features of the bike are recognisable from the Norcom Straight. For instance, the Transonic uses a similar wedge seat clamp, and the seatpost and wedge both have a roughened surface to give the wedge, which can be prone to slipping, extra grip on the post. Tube profiles and layup are new for the Transonic, based on a mix of wind tunnel time, computational fluid dynamics and rider feedback. “We couldn’t take the Norcom Straight down tube profile because the stiffness requirements of a road frame are different”, said Fairchild. “I’m convinced that you can never make a frame that’s too stiff for a professional rider but for everyday riding that’s maybe not quite so good”, he added, intimating that the stiffness of he production model may have been dialled back slightly from some of the prototypes that the pros were riding. 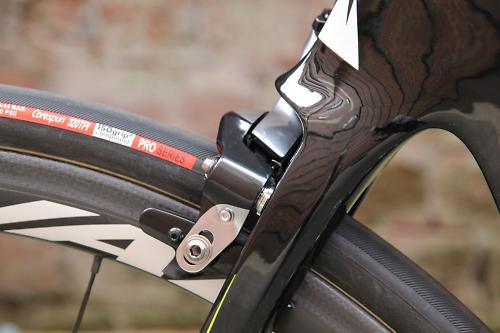 Much of the work to develop the Transonic has involved the NetApp-Endura team, and Fuji have certainly been thinking of the needs of their pro team when making some of the design decisions. Take the back brake: Fuji, like Canyon with the new Aeroad and Trek with the Émonda, have gone for a direct-mount brake but fitted it to the seatstays rather than the bottom bracket. Why? “We wanted to keep the rear brake on the chainstay so that in a race situation the mechanic can adjust it. We don’t want to be killing our mechanics!”, said Fairchild. “also if you pop a spoke it’s easy to just flip the quick release so you can keep going.” 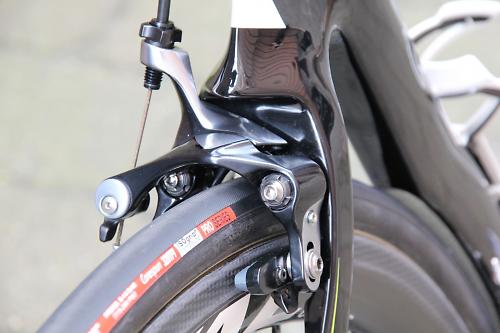 That necessitates using the front brake but with some changes; Fuji have been working hand in hand with Shimano R&D to get it right. The spring rate has been changed and there’s some structural changes to the brake too. Fuji were at pains to tell us that even though the Émonda and Aeroad have already broken cover, it was all their idea really. The frame is formed around the rear brake, and at the front the fork is shaped to smooth airflow round the calliper too. 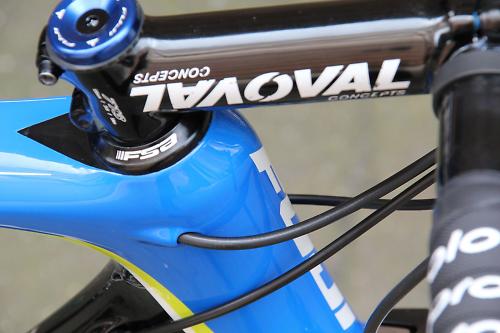 Like the new Canyon Aeroad, Fuji have moved away from using a very narrow front end which although more aerodynamic can mean more flex. The Transonic uses a 1 1/2” crown race and looks quite beefy at the front; the head tube has a slightly pointed profile in front of the steerer to cut the air more efficiently. All cables are internally routed, of course; all Transonic frames are mechanical and electronic compatible, with the battery located in the seat tube. There’s an integrated chain catcher and the bottom bracket is a PF30. Fuji say they’re working with Oval on a chainset with a 35mm spindle for extra stiffness. Fuji’s overall aim was to improve aerodynamic performance and weight without compromising stiffness over the SST. So, how did they do? 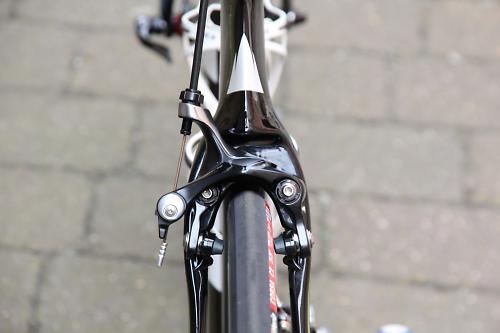 Well, Fuji claim a frame that’s 81g lighter than the SST. It matches the Altamira for weight, making it jointly the lightest frame they do although they’re not the lightest frames in the peloton. Fuji don’t publish a weight for the Altamira but we reckon somewhere around the 900g mark based on built bike weights. Stiffness-wise we were treated to the only percentage claim of the presentation: it’s 4% stiffer at the head tube than the SST, and bottom bracket stiffness is comparable. 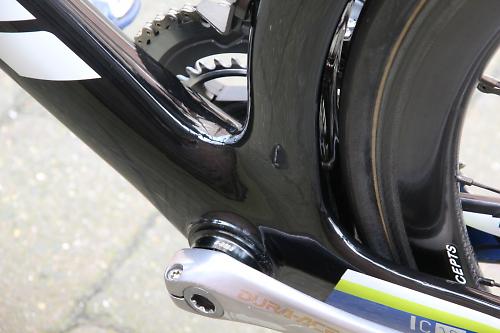 There’s plenty of aero numbers though, you’ll be glad to know. They were only prepared to talk about the improvement over their other frames though: “We have tested it against our competitors but if we publish those numbers they’ll get picked apart”, said Fairchild. So anyway: for a rider pushing out 300W, averaged over wind yaw angles from 0° to 20°, you’ll be getting a drag reduction of 121g over the SST, and 118g over the Altamira. That equates to around 24W and 21W respectively, or 65/55 seconds over 40km. So quite a chunk, according to Fuji’s figures. Interesting that the non-aero Altamira seems to be more aero than the aero SST.

It's not all about dialling the drag though: Fuji were very keen to point out that they've done a lot of work narrowing the gap between the ride feel of the Transonic and the Altamira. Aero bikes have traditionally been a bit of a compromise in terms of the ride; the new generation are trying to give an aero benefit but with the same ride characteristics as a standard road frame.

The team have had plenty of time on the bikes, both in prototype guise and as a finished production frame, and all of them were very positive about it. Zak Dempster was the most effusive: “This is the bike for me, the bike I’ve been waiting for for 18 months. I couldn’t give a stuff about getting up Alpe d’Huez but I need to deliver the climbers to the right position, keep them out of the wind. This is the bike for that.” so he’s happy.

David de la Cruz was certainly sold on the looks: “You get the same feeling as when you see a pretty girl you’d like to go and talk to”, he said. When someone pointed out that the bike wouldn’t talk back, he just shrugged: “It’s the same with the girls”.

There will be a full range of Transonic bikes available from September, based on two frames: a C10 ultra-high-modulus carbon frame at the top end and a C5 high-modulus version on the cheaper bikes. In total there are seven different builds. The Transonic SL (£4000) sports a full SRAM Red groupset and Oval 950 carbon clincher wheels. There’s a 1.1 with Dura Ace Di2 (£4800), a 1.3 with mechanical Dura Ace (£3400); those three bikes have the C10 frame. Then there’s three Ultegra models with C5 frame, varying amounts of Ultegra and different finishing kit: the 2.1 (£2650), the 2.3 (£1850) and the 2.5 (£1600). Finally the 2.7 (£1450) is mostly Shimano 105 with Oval chainset and finishing kit. You can see the full specs of the bikes over at the Evans Cycles website, although obviously you can't buy one yet. 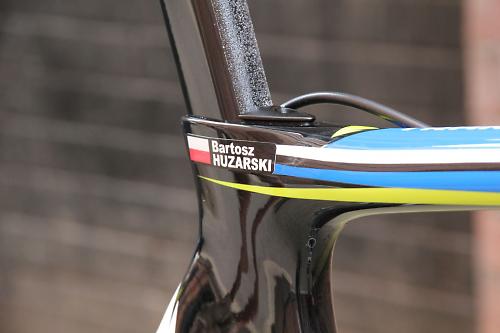 Of course, the bike pictured isn’t any of those: it’s Bartosz Huzarski’s team bike. As such it’s sporting team-issue gear such as the SRM chainset; NetApp Endura seem to still be using the 10-speed 7900 version even though the rest of the groupset is 9000 series. 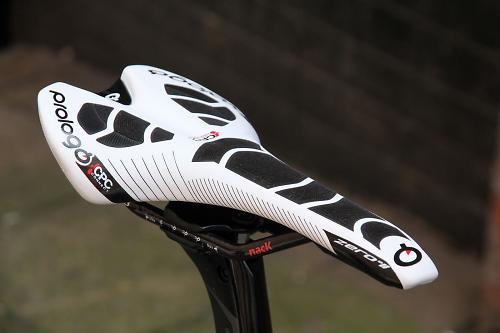 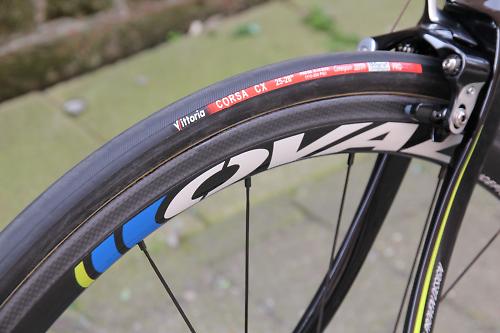 The finishing kit is Oval and so are the wheels, or at least they’re stickered as such: the hubs and skewers give the game away though. They’re rebadged Vision Metron 40s, looks like.

Look out for the Transonic under several of the NetApp-Endura riders today as the race gets underway.