Back to news
news
Video
Community 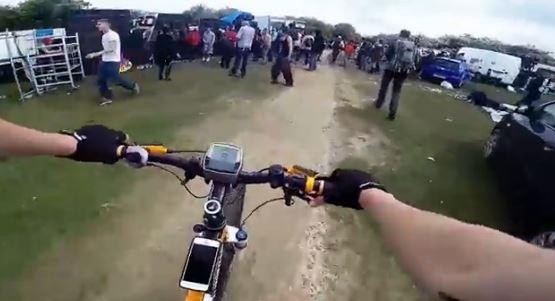 A pair of cyclists had the tranquility of their Sunday morning ride in the South Downs yesterday interrupted after they stumbled across an illegal rave.

One, Tim Fry, posted footage to YouTube showing him weaving in and out of parked cars and assorted ravers, ramplers and people walking their dogs at Devil's Dyke in the National Park.

In the description of the video, he said: "Rich & I thought we'd go for nice quiet sunshine ride at the Dyke, what we saw next was just plain surreal."

Passing the site of the rave, he says to his friend: "This is f*cking bizarre," adding later, with a laugh, "that can't be official!"

Indeed it wasn't. The Argus reports that Sussex Police decided to let the rave, which began at 2am on Sunday morning, go ahead despite complaints from local residents, with a spokesperson saying that "due to the darkness, rain, and numbers present, it was not appropriate or practical to attempt to close the gathering safely."

Occasional road.cc contributor Martin Thomas said on Facebook: "There was a time when I would have jumped off the bike and joined in if this had happened to me."

In a comment to his post, Mike Bell said: "Went past this on the road bike. Good to see proper old school space cadets in thier natural environment."