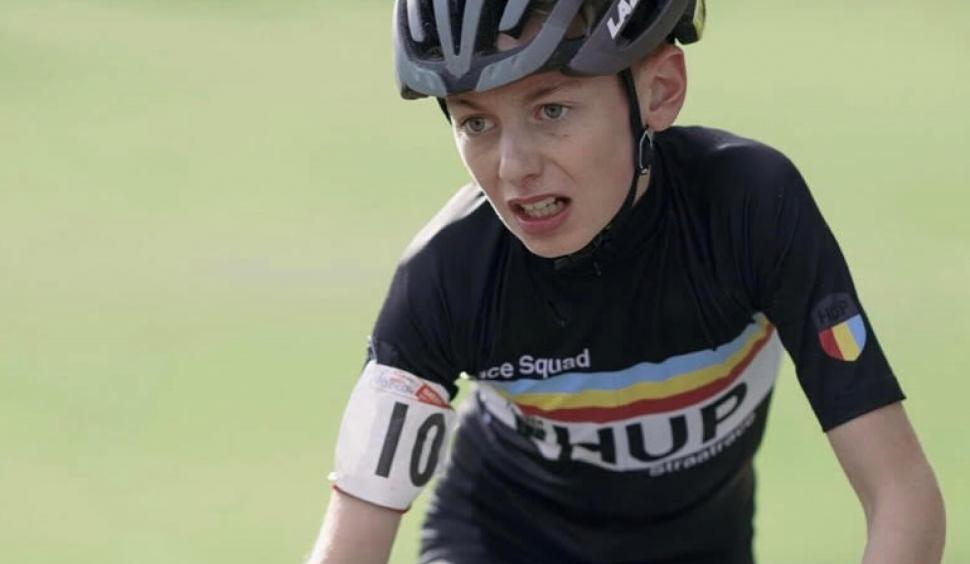 Xander Graham shot to fame after briefly outpacing Tour of Britain peloton back in September, and has been rewarded with place on new 'multidisciplinary' team ...
by Jack Sexty

The 12-year-old cyclist Xander Graham, who went viral back in September after outpacing the Tour of Britain peloton by riding alongside them on the pavement, has been announced as one of six riders on a new 'multidisciplinary' team called Jukebox Cycling. The team has also recruited retired pro cyclist-turned popular YouTuber Phil Gaimon and cyclocross champion Ruby West.

The real race we're here for!

Xander, who has adopted the name Xan Der Poel on his Instagram page after Mathieu van der Poel, came into view during ITV4's coverage of stage seven of the Tour of Britain. Riding his cyclocross bike on the pavement to the right of the peloton, he outpaced the pros for at least 30 seconds, before Team Jumbo-Visma's Pascal Eenkhoorn handed him a team bottle for his efforts.

While Jumbo-Visma haven't quite come knocking yet, Xander has been offered the next best thing by signing up with Jukebox Cycling, who officially launched today. Claiming to be launching with a "new approach to racing", the team roster features cyclists from all disciplines, and will allow them to build an events calendar combining numerous different forms of cycling.

"That’s the problem that Jukebox wanted to solve, by bringing together a group of riders experimenting with different ways to embrace cycling, whether it’s riding seven hours with a dachshund on your back or racing for the win at some of the biggest gravel races in the world," said the team's press release.

"We want our athletes to all be different. We want to empower our riders to push the envelope with what’s possible in cycling.

"Our athletes aren’t constrained to a single discipline, and that’s what makes them unique.”

Phil Gaimon, who documents his lack of a proper retirement on his YouTube channel and also regularly shares his thoughts on cyclists' safety, will work on a new gravel event and raise money for the No Kid Hungry foundation in the team's colours according to the Jukebox Cycling website. Ruby West will race the Cyclocross World Championships, and Dylan Johnson, Alexey Vermeulen and Adam Roberge will participate in Life Time’s Grand Prix, while Xander is targeting the CXNE Series.

Looking at Xander's list of achievements in cycling so far perhaps makes his brief outpacing of a World Tour peloton less surprising - he'd already won a Scottish Cycling National Youth Road Race Series prior to going viral, and two months after the Tour of Britain whirlwind he won the Scottish National Cyclocross Championships in the U14 category.