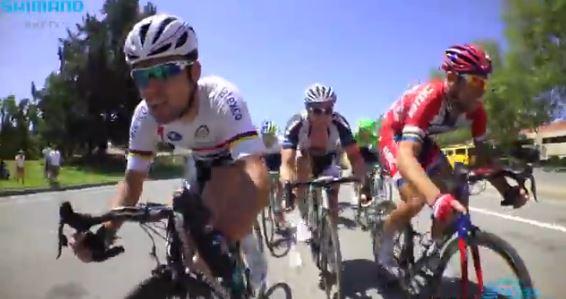 Videos: On board with Giant-Shimano at the final Tour of California stage - more great footage

Watch the last 3km as Degenkolb goes for the sprint, and descend at 88kph with Lawson Craddock
by Simon_MacMichael

The on-bike video footage we posted earlier this week from John Degenkolb and Jens Voigt at the Amgen Tour of California proved to be popular, given the insider’s view of the racing they provided, so here’s a couple more to wrap it up.

First, we’re following Degenkolb again as the Giant-Shimano sprinter tries to win the concluding stage of the race in Pasadena.

As in the video of the opening stage, he’s beaten to the line by Mark Cavendish, but this video gives a better view of the Omega Pharma-Quick Step rider’s win than the earlier one did.

It’s mainly shot from Koen de Kort’s bike – you can see how Degenkolb loses his team mate’s wheel ahead of the final run-in, as he is unable to find a way past two former world champions, Cavendish and Thor Hushovd.

The point-of-view switches to the Shimano Sport Camera mounted on Degenkolb’s bike for the final 150-metre charge to the line.

Also from Stage 8 is this video of the descent of Westlake Boulevard, taken from the bike of another Giant-Shimano rider, the 22-year-old American, Lawson Craddock – he finished third overall and won the young rider’s classification – with the speed hitting 88kph on the way down.

The UCI, whose president Brian Cookson has pledged to modernise TV coverage of cycling including potentially putting cameras on bikes and in team cars, authorised a trial of video at the race. We’re keeping our fingers crossed we’ll see more.