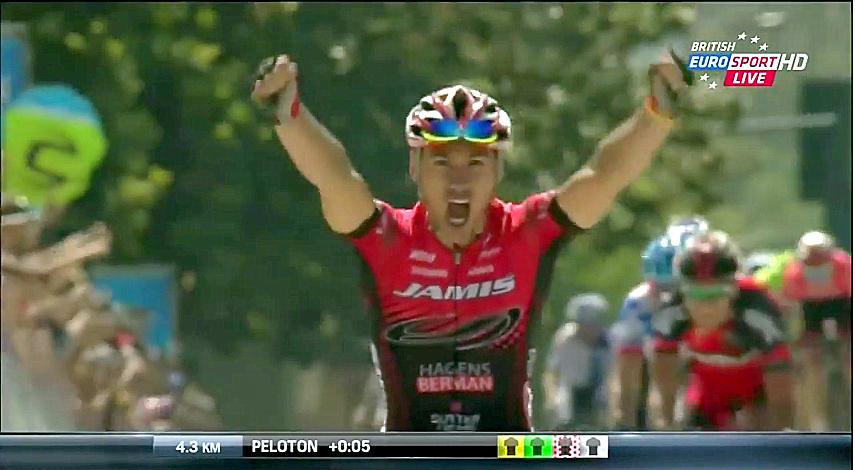 Plus, closer to home, amateur rider comes a cropper after giving photographer a "victory" salute...
by Simon_MacMichael

Cycling can be a cruel sport – and here’s some video proof of it as Spanish rider Eloy Teruel raises his arms in celebration of what he thinks will be his first pro win. Moreover, it’s one achieved against star names including Peter Sagan and Mark Cavendish at the final stage of the Amgen Tour of California on Sunday. There was just one minor problem – there was still another lap of the closing circuit to go.

In the following video, the Eurosport commentary pair of Matt Stephens and Brian Smith clearly sympathise with Teruel’s plight as the race announcer yells “No, no, no!” at the Spaniard as he runs through his premature exultation routine.

Stephens observes that the 31-year-old Teruel, who rides for the US-based Jamis team, “clearly doesn’t understand English” – although “no” happens to be the same word in Spanish.

Afterwards, the rider, who rode for Spain in the Omnium at the London 2012 Olympic Games, took to Twitter to say: “I wanted to win, thank goodness no-one saw it, hahahahaha!”

He would eventually finish the stage in Pasadena, won by Cannondale’s Sagan, in 56th place.

Closer to home, the weekend also saw an amateur cyclist left red-faced at Box Hill when he spotted a photographer and decided to do an impromptu “victory” celebration – only to lose control of his bike and fall face-first into the grass verge.

IT manager Matt Adams, aged 36, was taking part in the Mitie London Revolution two-day ride. His misfortune was captured by photographer Phil O’Connor and has since been reported by The Daily Telegraph, which has also published a sequence of shots of his tumble.

He told the newspaper: “I saw the cameraman at the top so I thought I would do a little victory gesture, like they do in the Tour de France when they cross the finishing line.

“But we were still on an incline and the front wheel just buckled, and I went straight over the handlebars a couple of hundred metres from the top.”

He added that he believed he had “got away with it,” but organisers told him the pictures would be posted to Facebook.

“I laughed quite a lot, I guess nothing ever happens like that so I’ve got my five minutes of fame. I have viewed a few of the comments on Facebook and most have been complimentary so I am taking it in the spirit it is intended.

“I was making myself look like a fool. I have no idea what went through my head, just getting to the top of Box Hill still cycling. I saw the camera and thought I would get a nice photo, and unfortunately it failed,” he said.