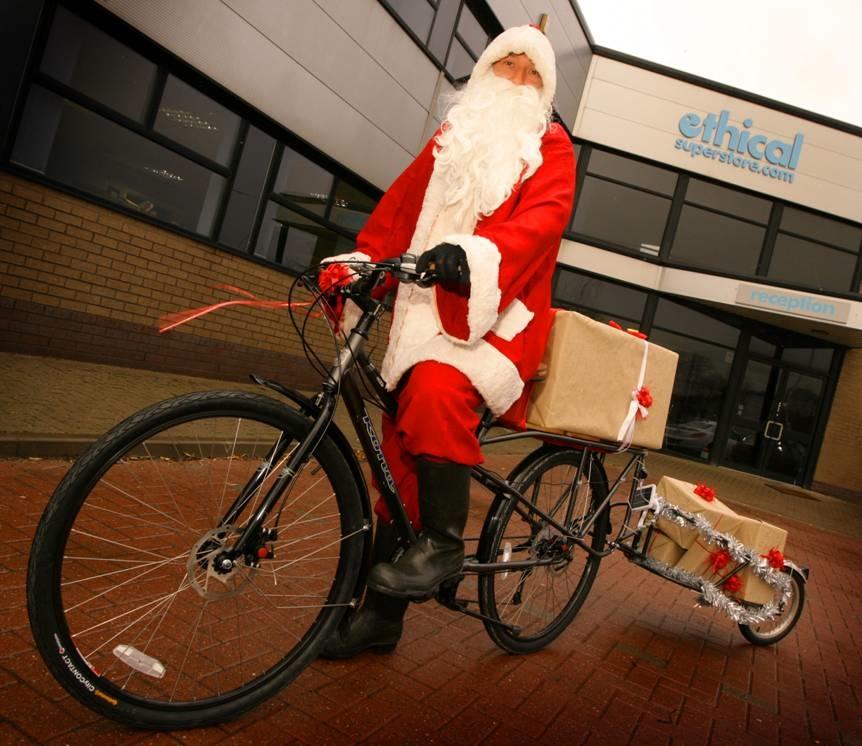 Kids in the North East hoping for a glimpse of Rudolf the Red-Nosed Reindeer this Christmas may be in for a surprise , with eco-friendly online retailer EthicalSuperstore.com getting Santa on his bike to deliver presents around Newcastle and Gateshead.

The same-day delivery service has been launched to ensure that shoppers get their Christmas gifts on time, while minimising carbon emissions and their impact on the environment using a specially-designed Ute bike supplied by The Kona Bicycle Company.

Anyone, child or adult, who believes in Father Christmas, should probably click away from this page now.

Members of staff will don Santa’s robes and beard to make deliveries by 2pm on goods ordered for delivery in the area by 10am that morning, and – with the help of elves back in the warehouse, presumably – they have been busy transforming the bike’s trailer into a “delivery sleigh, ” complete with solar-powered Christmas lights, which you can also order for yourself via the website.

The retailer’s Marketing Manager, Ben Mawhinney, said: ““We came up with this idea as we are always keen to go the extra mile and this helps us with our carbon neutral aim, as well as ensuring that in the run up to Christmas over 600 customers in the NE1 to NE9 postcodes can be confident of same day delivery.

“Santa will be carrying Christmas presents, but he's also delivering an important message about the environment as he cycles around the area with his sleigh. We're hoping that as many people as possible will enter into the Christmas spirit with our Santa deliveries – anyone who wants to know more should visit our website for an update of how our Santa is getting on!”
A percentage of sales using this delivery method will be donated EthicalSuperstore.com to the Sunshine Fund throughout the month of December.

The first delivery that Santa made was to none other than Carlton Reid, executive editor of the cycling industry trade magazine, BikeBiz, who described the initiative as a “win-win situation”, saying: “When I order products from
EthicalSuperstore.com I have always used the warehouse pick-up option, and ride my bike to pick up the order. However, not everybody can do this so it's great to see EthicalSuperstore.com offering a local delivery service by bicycle. “

He added: “With the United Nations Climate Change Conference starting in Copenhagen next week now is the perfect time to demonstrate that cargo bicycles can carry an awful lot of weight in a carbon-friendly fashion. Not only will the Santa Delivery be handy for customers, it's going to be a lot of fun for EthicalSuperstore.com staff, who will be getting screaming fit into the bargain.”

EthicalSuperstore.com was founded in 2004 and carries 8,000 lines of fair trade, organic and eco-friendly products. Its growth allowed it to move to a new warehouse last year in the Team Valley in Gateshead, where it employs more than 50 people.

Kona describes its Ute bike – the name derives from the word “utility,” and as anyone who has watched Neighbours will know is what Aussies call their pick-up trucks - as “specifically designed to maximise the engine we were all born with.”

It claims it is “strong enough to carry all your everythings, comfortable enough to use as a multi-purpose commuter, stock with fenders, bell, wooden deck, large waterproof pannier, and a solid motorbike style center-mount kickstand for added stability when loading the goods,” and ideal “for those ready to kick their addiction to combustion engines.”