So here it is, the brand new Colnago C60. Claimed to be lighter and stiffer than the outgoing C59, redesigned from the bottom bracket up and available with either caliper or disc brakes. Revealed just last month, this is just one of two in the country and has been built up by UK distributor Windwave with some top-shelf parts producing an £8,000 build, on a frame that alone costs £3,499.95. We've got the caliper braked version to play with, the disc brake C60 won't actually be available until later in the year. 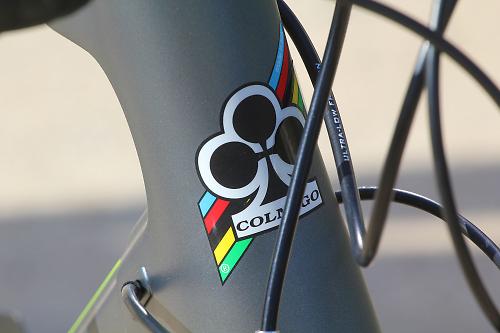 Redesigned from the bottom bracket up

Chief among those changes is an all new bottom bracket, which they call ThreadFit82.5. It’s quite interesting really. Pressfit bottom brackets are largely standard on high-end carbon fibre frames these days, and the C60 has moved in this direction. Only Colnago have their own, rather neat solution. 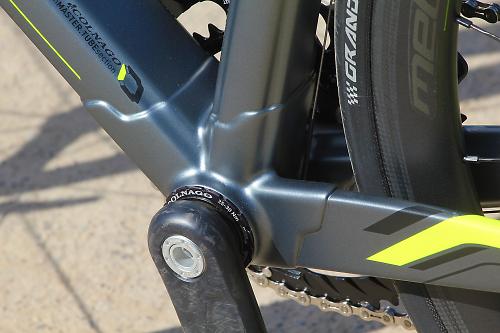 Essentially they have designed an 86mm wide shell with screw-in alloy cups that carry the bottom bracket bearings. The alloy cups have a more precise tolerance than the carbon shell, so should avoid the usual PressFit problems, and they’re easily replaceable. It also accepts any BB86 compatible crank from Shimano, SRAM, Campagnolo and FSA, along with the BB386EVO we have here. 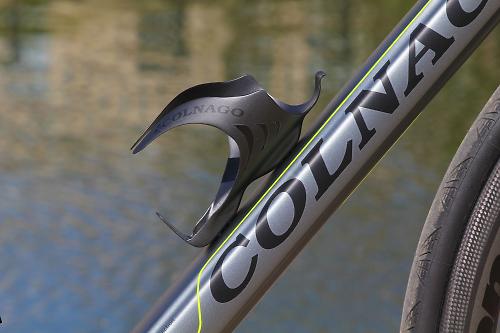 With that larger bottom bracket shell Colnago have been able to dramatically increase the diameter of the down tube, seat tube and chainstays. The down tube is now a 66x52mm square section, up from about 44mm of the C59. That's a big difference. It’s also shaped with a noticeable star-shape profile, the ridges are something that really catch the eye when you first see it in the flesh, in homage to the original Master. It’s a bit more angular looking than the smooth lines of the old C59, but this shape isn't just for aesthetics, it has contributed to the increased stiffness. 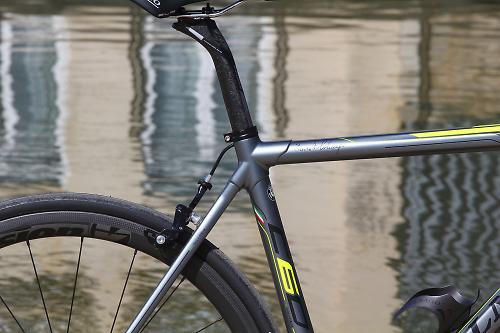 The seat tube now measures a maximum of 51.5mm, compared to the C59’s 34.9mm. You can see that it is asymmetric around the bottom bracket, wider on the non-drivetrain side but pinched in on the driveside for the front mech clearance. Up top is a 31.6mm seatpost. The reason for this size, and not a 27.2mm, is because Colnago very much still rely on feedback from the professional racers, who want maximum stiffness, and they design this bike to meet their needs and requirements. 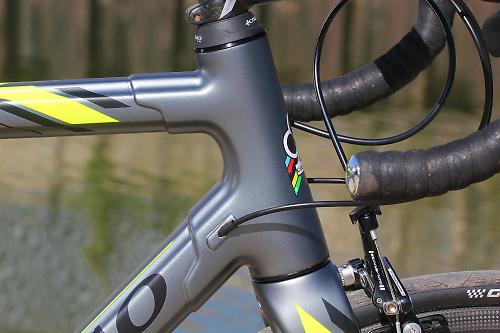 Also large in size are the chainstays. They are about twice the height at the bottom bracket as they are at the dropouts. Internal reinforcing ribs add more stiffness. We’ll have to see how that fares out on the road. At the end of the chainstays are all-new CNC-machined one-piece dropouts. Carbon dropouts are increasingly popular on similarly high-end carbon frames, but Colnago reckons these alloy dropouts are lighter. The mech hanger is replaceable, and they’ve cleaned up the internal routing for electronic groupsets. All cables are routed internally, as you'd expect on a frame like this. 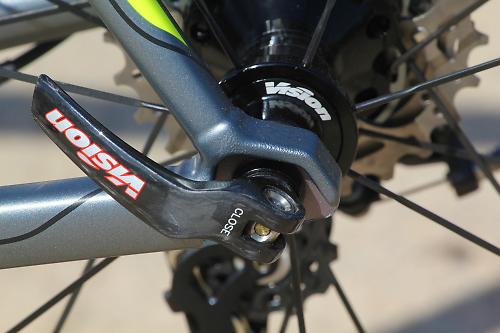 The other reason for the new dropouts is because the C60 has been designed from the outset with disc brakes in mind. Yes that's right, from the outset the C60 will be available with or without disc brakes, so you can take your pick. It keeps everyone happy. The disc version won’t be available for some time though according to Windwave, because Colnago are concentrating on getting the caliper braked version to market and fulfilling orders.

All these changes contribute, according to Colnago, to frame that is lighter and stiffer than the C59. By how much we don't know, Colnago haven't released any data or even a claimed weight, so for now we have to take their claims at face value. As soon as we know more we'll let you know.

So a bit more about the bike we have in for test. It’s been built with a Campagnolo Record groupset, 11-speed and mechanical, with the new FSA K-Force Light BB386EVO chainset. This new chainset has been two years in development and uses a new four-arm five-bolt spider, with one bolt concealed behind the crank arm. The power you apply to the cranks isn’t equal through the pedalling stroke, the load peaks when the leading crank arm is roughly level, says FSA. So by rotating the spider and placing the fifth bolt behind the crank arm, the design puts extra strength where it's needed most in the pedal stroke. Sounds similar to Shimano’s latest chainset design. 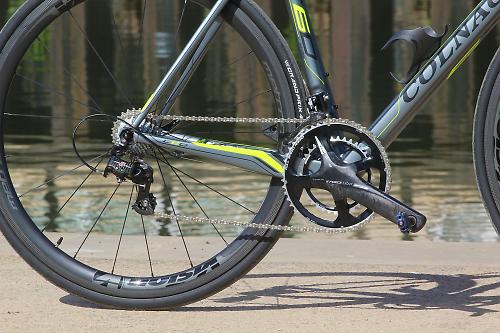 The crank arms are made from hollow carbon fibre with a unidirectional finish and the rings are 3D forged and CNC machined from 7075 aluminum. They claim a weight of 584g. They are available in loads of configurations, we have a 52/36t setup, an increasingly popular choice. 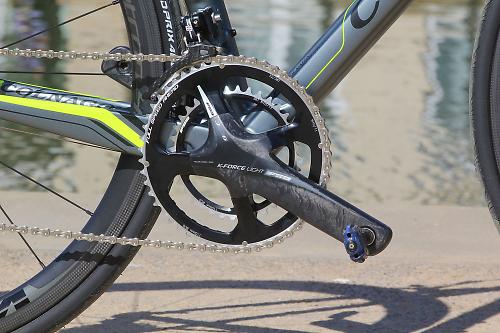 Colnago are offering a range of paint finishes in three general styles; Racing, Italia and Classic. This is from the Racing range, and is rather fetching with a contemporary look that is a long way from some of the more elaborate finishes of Colnagos from the past. 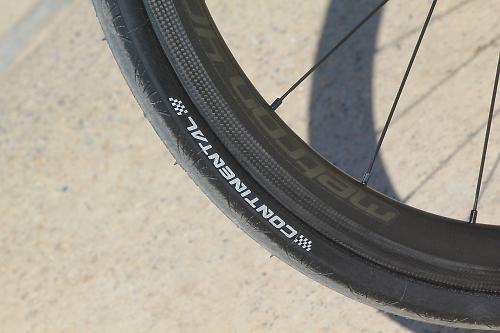 The Vision Metron 40 wheels are all-new, but we’ve already put some time in on them, at the Cannondale Synapse launch last year. We came away very impressed so we have high expectations for them, and we’re looking forward to getting them out onto UK roads. The have a 40mm depth and they’re wide, as is the current thinking in aero wheels, with a 25mm external width. They weigh a claimed 1,495g, and they’re also available in a tubular version - that’s the wheel that Peter Sagan and the Cannondale team race. They’ve been fitted with 25mm Continental GP4000S tyres. 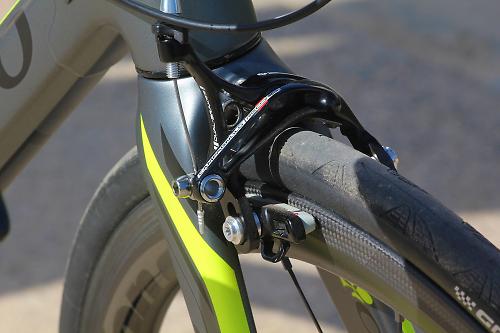 Rather than the stock brake blocks supplied with the wheels, Windwave fitted the new BBB Carbstop brake blocks, because they distribute BBB in the UK. BBB have developed their own compound which they claim produces greater power and durability than other carbon brake blocks, so we look forward to trying them out. They cost £16.95 for a set. 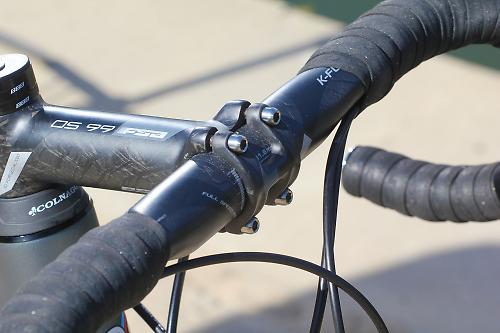 The bike is finished with the latest FSA K-Force Compact handlebar and SB32 seatpost, a OS99 stem and Colango branded saddle and bar tape. There's really been no shortcuts with this build, and it produces a stunning looking bike. The high level of finish, though you could easily go higher, puts the complete build at £8,076.46. On the road.cc scales it’s 7.25kg (15.98lb). 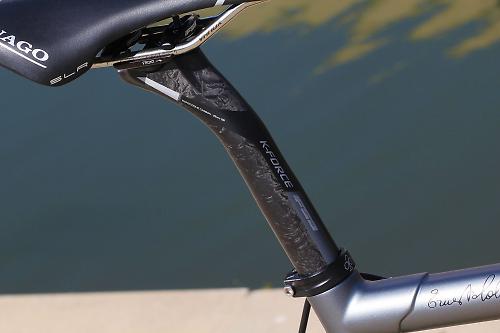 Windwave are expecting the C60 to be available by the end of May, so time to form an orderly queue. We’re going to get some miles in while it’s sunny, we’ll let you know how we get on in a couple of weeks. This bike needs some thorough testing.

Expect to see Thomas Voeckler out of the saddle hustling this bike along in a heroic solo break at some point in the year, tongue poking out, face a picture of pain