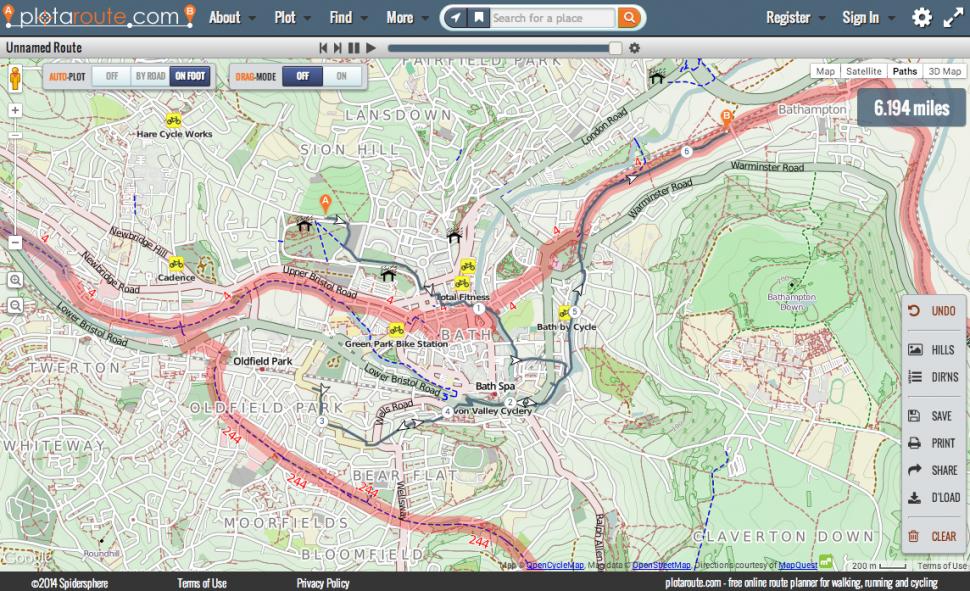 Planning your ride just got easier with plotaroute.com

The new feature utlises map data from both Google Maps and OpenCycleMap - an online cycling map based on the open-source mapping project OpenStreetMap - to create tailor made cycling routes.

The feature, which is listed as 'make me a route' under the 'Plot' menu on the tool's interface, creates a tailor made cycle route around local and national cycle paths, avoiding highways and main roads.

Once selected, the 'make me a route' tool allows users drop a pin on a location of their choosing and select a distance they'd like to travel. The tool then provides a list of ten suitable local rides, of the chosen distance, from that point.

Before the auto-map feature was introduced, Plotaroute.com was too similar to many other online route-plotting tools. The site's USP was to give its users the ability to plot and edit their own custom cycling routes on the country's roads, footpaths and cycle paths with ease.

Since the site went live in January, plotaroute.com has been vying for a share of the saturated ride-mapping market with only this ease of use as its selling point.

However, the site's update on March 10 - which introduced the auto-map feature for cyclists - has given plotaroute.com something to differentiate itself from the competition.

Even before releasing its auto-map feature for cyclists, plotaroute.com had received praise from cycling blog London Cyclist for its usability. Blogger Andreas wrote that plotaroute.com “is by far the easiest GPS route plotting site I’ve ever found, so I thoroughly recommend it.”

The site’s founder, John Piears, also co-founded the UK’s leading independent running website Good Run Guide, and it was there that he found inspiration to begin work on plotaroute.com.

He told road.cc: “Like many similar websites targeted at runners and cyclists, Good Run Guide aims to provide a complete online training package, enabling you to plan and track all your training, races and fitness goals, and to share your progress online.

“This is great for anyone who wants to record every detail of their training, but in my experience there are many people who simply want to know how far they’ve run or cycled, without tracking and analysing every stride or turn of the pedals.

“If you’re one of these people, sometimes it can be hard work to even find the route planners on other sites, let alone work out how to plot and share your route.

“So, that’s where the inspiration for plotaroute.com came from. Its aim is to make it quick and simple to map and share routes, without all the clutter and complexity of features you may not want – a sort of YouTube of route mapping.

“Once you arrive on the site, you’re just one click away from plotting your route - that’s the inspiration for the site; making route plotting easy."

Plotaroute.com has plenty of other features alongside its auto-map and route editing tools for cyclists, walkers, and drivers.

Site users can download their route in gpx file format, which can be loaded onto most GPS devices; automatically generate directions from their designed route; use their device’s GPS capabilities to ‘find themselves’ in the tool; and find local bike shops, pubs and even public toilets.

1
Belgian female ex-pro denied sports director role with men’s team due to topless pictures
2
Five cool things coming soon from Prime, Shimano, Le Col, BTWIN and Magicshine
3
Near Miss of the Day 527: Land Rover driver passes between cyclist and fuel tanker
4
Bike at bedtime: Festka Doppler
5
Near Miss of the Day 528: Driver pulls out on cyclist “lit up literally like a Christmas tree”
6
Near Miss of the Day 523: Tipper truck driver pulls out in front of lorry and cyclist
7
Bike at Bedtime: take a look at the Wilier Filante SLR
8
Threat to axe New Forest’s off-road cycle network as court criticises “out of control” cyclists