The Merida Ride Pro Team is the bike that the Team Lampre-Merida riders will be racing over the pavé in the Spring Classics and during this year’s Tour de France (stage 5 includes 15.4km of cobblestones, including Carrefour de l’Arbre and Arenberg), and we got to ride it on the roads of Mallorca last week.

We showed you Merida’s Reacto Evo Team aero road bike on Monday. That’s the bike that the Lampre-Merida riders will use most of the time – the default choice, if you like. The Ride Pro Team is the one they’ll pull out for the cobbles. Merida have had a Ride series of comfort bikes for years and the Pro Team model is adapted from that range, but in more of a racing guise. In terms of geometry, the 56cm version comes with a 565mm top tube and a 195mm head tube. If you work in stack and reach, those figures are 598mm and 382mm respectively. That gives you a ride position that’s a little more relaxed than that of a standard road bike, but it’s certainly not sit-up-and-beg.

The bottom line is that the Ride Pro Team’s geometry is somewhere between that of a standard racy road bike and that of a short and tall comfort-inspired road bike.

The basic idea of the Ride Pro Team is that it should be a race machine with added comfort for riding on poor surfaces: Paris-Roubaix, Tour of Flanders, most roads in the UK,… With that in mind, the Merida designers have gone to work on the rear triangle. There’s a big offset in the seatstays (they meet the seat tube well below the top tube junction), for example, and the low-profile stays, called Flexstays, have been designed specifically to absorb shock. The cross section of the seatstays is just 10mm, the minimum permitted by UCI regs, and they’re flattened to encourage up-and-down movement. The chainstays slim down massively from the bottom bracket too, the idea again being to add extra comfort out back without affecting lateral rigidity. Merida use biofibre in there to absorb vibration further, a central layer of bio flax fibres within the carbon.

Merida also use a 27.2mm FSA K-Force Lite seatpost rather than one of a larger diameter to provide a little more comfort, and the Ride’s SL carbon fork has been shaped specifically to allow a degree of vertical flex. As you can see in the pictures, the fork legs taper right down before bulging out again towards the dropouts, the idea being to smooth over rough roads. While we’re looking at the fork, you can just about make out the rear-racing mudguard mount on the back of the blade, just behind the dropout. That’s very unusual on a race bike. You get similar mounts at the rear.

The Ride Pro Team is built with what Merida call an X-Taper head tube which means that it’s externally butted with an oversized 1 1/2in lower bearing, 1 1/8in up top. It’s a chunky piece of work designed to provide steering precision. I got a couple of hours on board the Lampre-Merida version of the Ride, a bike set up with the same equipment that the team riders use, more or less: a Shimano Dura-Ace Di2 groupset, Rotor 3D cranks with oval Q-Rings, and a Prologo Scratch Pro saddle. The seat post, stem and handlebar came from FSA while the wheels I used were Fulcrum Racing Zeros with Continental GrandPrix 4000S 23mm tyres (the team use tubular setups). The closest version to this that you can buy in the UK is the Merida Ride CF Team. This has the mechanical version of the Dura-Ace groupset with a compact (50/34-tooth) DA chainset, and Fulcrum Racing 1 wheels. This bike also gets Conti GrandPrix 4000S 25mm tyres, the larger air chamber making even more sense than usual for a bike designed with an eye on comfort. Merida claim the weight of this model is 7.3kg (16.1lb), and it is priced at £5,500.

I found the ride to be very comfortable. It’s not just a load of hot air from the Merida marketing department, you really do get a relatively vibration-free experience here – it’s certainly a long way from harsh. The features designed to smooth things over aren’t miraculous – you’re still in contact with the road surface – but they just take the edge off things over rougher roads, and Mallorca has enough of those if you want to find them. As mentioned above, wider tyres would help further. I’d certainly be running 25s on a bike like this, but each to his/her own. I got on pretty well with the Prologo Scratch Pro saddle too. It has quite a round profile from side to side compared to the Zero II that I used on the Reacto Evo Team. That Zero II and I didn’t really hit it off but I could have used the Scratch Pro all day without a problem although, again, that’s a case of horses for courses. The best thing about the Ride Pro Team is that it combines that comfort with a performance edge. Personally, I don’t like a bike with a really high front end. Some people do – fine – but it’s not for me. As I said earlier, this bike has a slightly extended head tube and a slightly shortened top tube, but neither is nuts. A 195mm head tube on a bike with a 565mm effective top tube is relaxed but not crazy. Even when you’re resting your hands on the hoods, you don’t feel like you’re sitting up too high with your torso catching the wind and slowing you down. You’re still pretty efficient, and when it’s time to go to work you can get down on the drops. Even if you’re not the most flexible person in the world, chances are that won’t be too much trouble because the FSA K-Force handlebar comes with a compact bend. 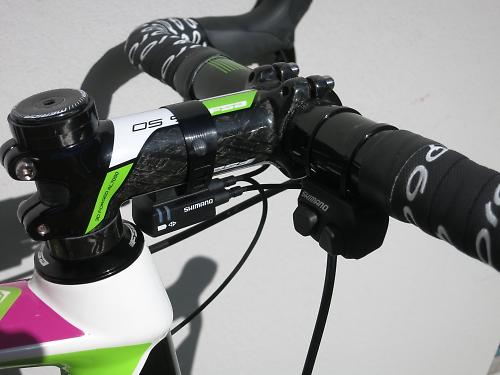 The Ride Pro Team has a real turn of pace too. Sure, if lightweight is your number one concern you’ll be able to find bikes at this price that are a touch quicker off the mark, but the Pro Team doesn’t hang about, accelerating and climbing with impressive enthusiasm. Don’t forget, this is a bike that’ll be duking it out in World Tour races this year; it’s right up there in terms of all-out speed. Who should buy this bike? If you’re after a performance-orientated road bike but you struggle with the comfort offered by standard race rigs, this is certainly one to consider.