Team Lampre-Merida’s main weapon of choice this year will be the Merida Reacto Evo Team aero road bike rather than the superlight Merida Scultura SL that the riders mostly rode last year, because the aerodynamic advantage far outweighs the slight weight penalty. We got the chance to ride the Reacto Evo Team in Mallorca at the end of last week.

Lampre-Merida did use the Reacto Evo Team last season, but this time around it is going to be the default option. Before our ride impressions, let’s have a quick look at the reasoning behind the shift...

Merida say that they got in some outside scientific consultants to analyse the stages of last year’s Tour de France, and they concluded that there was not one stage where the lightweight Scultura SL Team offered an advantage over the more aero Reacto. 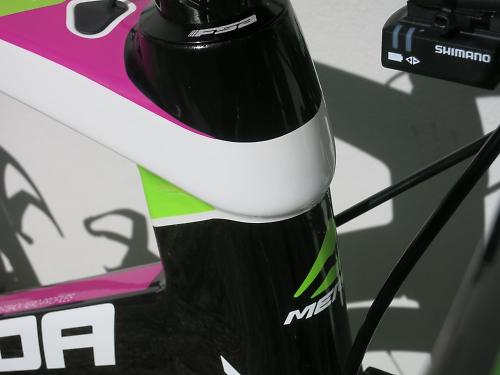 Merida’s Head of Design, Jurgen Falke, says, “Bike weight is only relevant for acceleration and very steep mountains. The influence of the weight is the most overrated issue [in] road bikes.”

That’s not a revelation, but the weight thing is one of the most pervasive myths in cycling. Plus, the UCI aren’t going to relax the 6.8kg minimum weight limit for racing for at least two years so there’s little point in the brands shaving grams off their bikes. There’s far more mileage in improving efficiency. 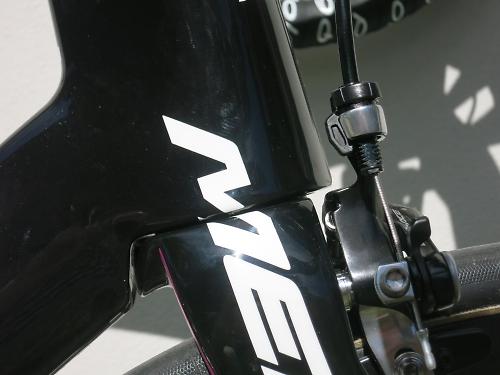 Why focus on aerodynamic efficiency as opposed to other forms of efficiency? Well, the aero drag of the bike and rider makes up about 73% of all the resistance working against a racer, and the aero drag of the wheels accounts for another 7%. Rolling resistance makes up just 17% with chain friction and bearing friction very minor. That means focussing on aerodynamics offers the biggest potential for improvement.

A 2kg reduction in weight at 30kph (18.75mph) on the flat gives a benefit of just 0.05kph (0.03mph) – hence Lampre-Merida’s focus on the Reacto Evo Team and the spending of a lot of time at the track and in wind tunnels to get each rider’s bike setup and position sorted.

Okay, none of that information is new but Merida only started working with Lampre last year so they initially provided the team mostly with the superlight bikes that they wanted. Now that the partnership is a season old, they’ve altered the focus. 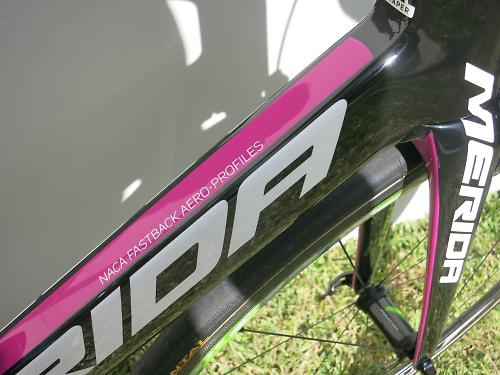 The Reacto Evo Team is built around Merida’s Fastback tube profiles which are based on the NACA (National Advisory Committee for Aeronautics) 0028 airfoil. The tail of the profile is cutaway – as you can see here on the down tube – in such a way as to keep the airflow stable without causing turbulence. This also keeps the weight down and allows Merida to keep the tube dimensions within the UCI’s rules. 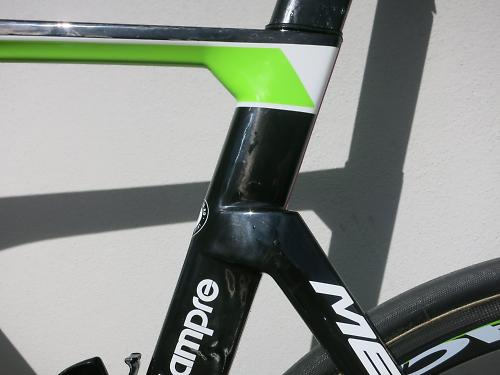 The seatstays meet the seat tube way lower than the top tube junction, reducing the frontal area, and they're positioned well out from the rear wheel to manage airflow back there, kinking sideways from the seat tube before heading south. 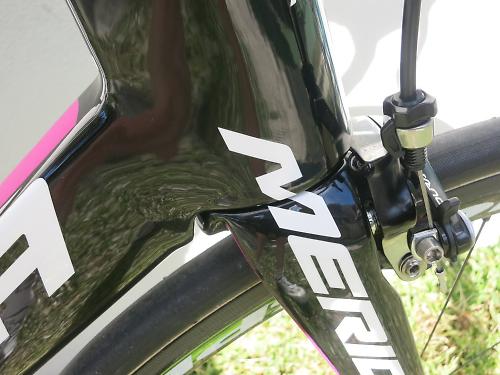 The legs of Merida’s Reacto Carbon Pro-Direct fork are widely spaced too, and the crown is integrated into the silhouette of the frame.

The front brake is direct mount, positioned at the front of the fork rather than sheltered away behind it because Merida say that the difference is minimal in terms of aerodynamics. 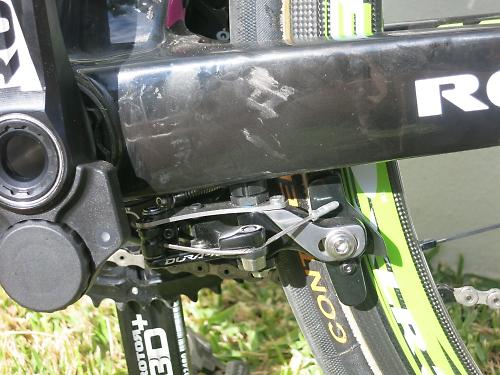 The rear brake is direct mount too, hidden away behind the bottom bracket. This allows Merida to do away with a brake bridge between the seatstays, keeping things clean in that area for more of an aero advantage. The seat clamp is integrated too and the Shimano Di2 cables run internally. 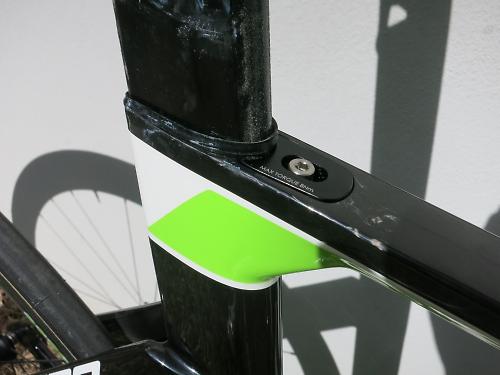 I’m not going to tell you that you can feel the impact of these aerodynamic features out on the road: you can’t. Even if I was riding this bike on a familiar route rather than on the roads of Mallorca, I couldn’t tell you that because there are far too many variables to confuse the issue. All I can do is report Merida’s aero claims:

• The Reacto is faster than the Scultura up to a gradient of 9%, despite being 200g heavier.

You could argue that that it’s at gradients of greater than 9% that races are sometimes won and lost – in a summit finish, say – but Merida say that the Reacto is more efficient over the vast majority of courses. Over a theoretical 100km (62.5 mile) course with 2,000m or climbing at gradients from 5% to 10% (most of it 7%), Merida reckon that the Reacto saves more than 2mins over the Scultura. The flatter the course, the more time it will save. They also say that over this notional course it’s faster than the BMC TimeMachine TMR01, the Giant Propel Advanced SL0, the Specialized S-Works Venge, Scott Foil Team Issue, Canyon Aeroad CF, Ridley Noah Fast... and a bunch of other big-name bikes. Of course they do. The only bike to come out slightly faster (on a notional course chosen by Merida, remember) was the Cervélo S5 VDW DA Di2.

Okay, that’s enough on the aerodynamics. The take-home facts are that Merida reckon that in most cases you’re better off on an aero bike like the Reacto than on a superlight bike like the Scultura, and they reckon that their bike is more aerodynamically efficient than all but one of the aero road bikes out there. Let’s move on... 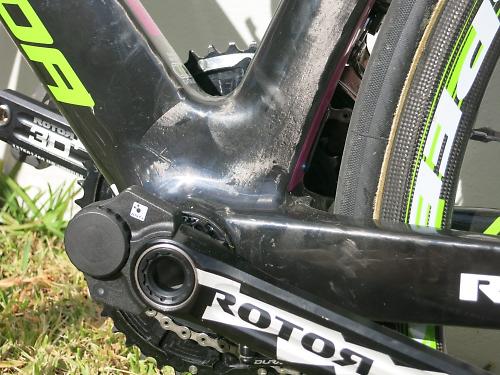 The Reacto Evo Team impresses in terms of frame stiffness too. We headed out on a varied route in Mallorca (from Port d’Alcudia to Cap de Formentor, if you happen to know it) that was very flat to start with and very hilly later on, and the frame rigidity felt high. Get up on the pedals for the climbs or to sprint and the oversized bottom bracket (it’s BB386Evo standard) holds firm and so does the front end.

We took in some fast descents, including sharp, twisty roads, and the front end felt perfectly sure-footed throughout. The only problem there was that the Dura-Ace brakes squealed like... what squeals?... um, pigs, on the Fulcrum wheels. They were so loud that people in the cars in front were nervously glancing in their rear-view mirrors. We’re sure we could sort that out with a bit of fettling. It’s true that some aero bikes can be a touch firm. Or, to be less polite about it, they kick you in the arse at every opportunity. Aero shaped tubes and seatposts don’t tend to flex much (it’s all about that good old vertical compliance), but Merida have taken a notch out of their S-Flex seatpost (with a flip-flop head and an integrated bracket for a Di2 battery) to give you a degree of up-and-down movement at the saddle. The silcone material they put in the hole doesn’t influence the performance, by the way, it’s the fact that the hole is there at all that’s the important thing. I got just 2:30hrs on Reacto Evo Team and I had a Prologo Zero II saddle on there which I’d never used before so I couldn’t tell you exactly how comfortable the bike is compared to others that I’ve ridden, but I’m confident enough to say that it’s more comfortable than many other aero bikes out there. I wouldn’t say it’s as comfortable as many non-aero road bikes, mind, but it certainly provides what I’d call an acceptable level of comfort. Acceptable to me, at least.

There are some very British roads in northern Mallorca – knackered surfaces, basically – and the Reacto handled them all fine. You couldn’t say it’s a plush ride, but it’s not going to shake you to pieces either, or buck you up in the air over the rought stuff. For what it’s worth, Merida reckon you get 4.5mm of flex at 100kg from the Reacto, compared to 2.5mm from the Cervélo S5, for example.

Oh, there’s one other reason why Merida-Lampre have decided that their team should ride the Reacto Evo for most circumstances rather than have the riders swap between the Reacto and the Scultura... They need to have the Ride Pro Team for the pavé (cobblestones) and the Warp for the time trials; if they had both the Reacto Evo and the Scultura, that would be a hell of a lot of bikes to shift around. Logistically, that’s difficult. Plus, although Lampre-Merida don’t say so, the expense is perhaps a consideration too. The bike that I rode was built up with a Shimano Dura-Ace Di2 groupset and Fulcrum Racing Speed XLR 35 wheels. The standard version available in the UK has a mechanical Dura-Ace groupset and Fulcrum Red Wind 50 wheels. I had a Rotor chainset with oval chainrings because that’s what Team Lampre-Merida are using, whereas the standard model gets a Dura-Ace chainset. The handlebar and stem are from FSA and you get a Prologo Zero II saddle, as I did. In that build it’s priced at £5,500.

The Reacto CF 905 has a frame that’s the same shape but it’s a lower spec. It comes in a largely Shimano Ultegra build with 105 brakes, an FSA Energy chainset, and Fulcrum Quattro wheels. This version is priced at £2,500.