It hasn't been confirmed officially yet, but photos posted on Team Sky's Facebook page this week clearly shows the team will be using Garmin computers with their Stages Cycling power meters this season. The photo above is Bradley Wiggins' Pinarello equipped with a Stages branded Garmin Edge 810.

Yesterday, Team Sky announced they would be using Stages Cycling power meters for the 2014 season, switching from SRM which they've been using since 2010. Because Stages Cycling do not manufacturer their own head unit, there was quite a bit of speculation about what computer they would use. That photo of Wiggo's bike all but confirms it.

The Stages Cycling power meter works with any compatible ANT+ or Bluetooth computer, like a Garmin, to collect the data from the strain gauges in the non-driveside crank. So Team Sky would obviously need a head unit to partner with the Stages power meter. And it looks like they've opted for Garmin. 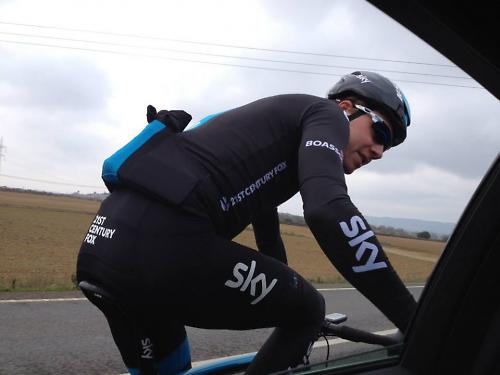 And it does look like they're using Garmin computers, based on several photos posted on their Facebook page over the past couple of days, though nothing has been confirmed yet. Here's Edvald Boasson Hagen training in Majorca with what clearly looks like an Edge 500. Other photos lead us to think they're using Bar Fly out-front mounts, which works really nicely with two different sized Edge computers. How many Garmin computers does a professional team need? 130, apparently, and they all need to be painted with the Stages logo. Revealingly, photos posted by Paint My Bike, an Australian paint shop, shows a massive collection of Garmin Edge 500 and 810 computers being spray painted, having the Garmin logo on the front replaced with the Stages logo.