Stages Cycling has just announced it'll be the official supplier of power meters to Team Sky for the 2014 season. 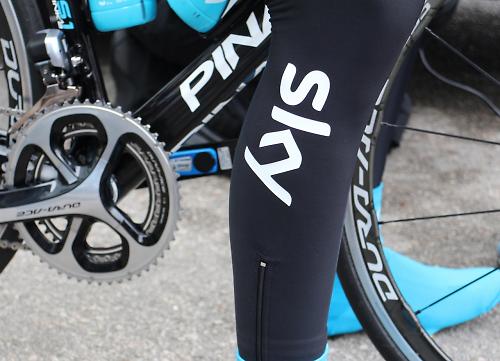 Power measuring is pretty much universal in the professional peloton, with just about every rider expected to train and, increasingly, race with a power meter these days. For a long time German company SRM has been the dominant choice. Team Sky have used SRM for the past couple of years, but this season they’re switching to Stages.

Team Sky is famously meticulous about bike and kit preparation, and its training methods. Power measuring is core to its training and racing, with some accusing the team last year of ‘riding by the numbers’ during races. It’s clear that the power meter is one of the most important bits of kit the team possess.

“As a team, we see the power meter as a very useful tool,” said Tim Kerrison, Team Sky’s Head of Performance Support. “The results that we get, both from training and racing, help us to quantify how our riders are performing, which then allows us to make informed coaching decisions.” Stages Cycling is a relatively new player in the increasingly competitive power measuring game. The first thing to mention is that Stages is one of the most affordable power meters currently available, costing from £599 to £799. That's of little relevance to Team Sky, but the fact that it adds just 20g to a Dura-Ace crank will appeal to Chris Froome and Co. The adoption by Sky is a huge coup for the young Colorado company.

“We are so pleased to announce that Team Sky will race with Stages Power this season; this sponsorship, and what it means for Stages Power, is very exciting for our company,” said Pat Warner, Stages Cycling’s Senior Vice President. “We are humbled and honoured to be collecting data for one of the best teams in the sport. It’s a huge responsibility and we both have great confidence that Stages Power can help Team Sky be successful this season.”

Mat reviewed the Stages power meter for road.cc and called it a “lightweight and easy-to-fit power meter that gives results comparable to much more expensive systems.” You can read the full review here. We also included it in road.cc’s 25 top cycling products of 2013-14. 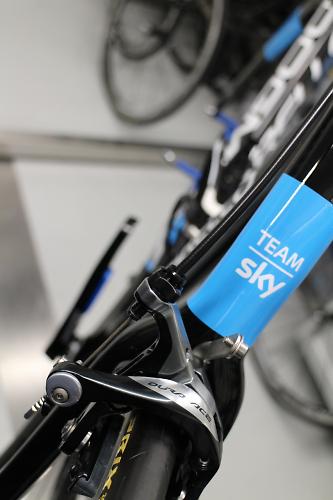 There is a lot more choice in the power meter market this year, and we expect to see less of the dominance in the pro peloton that SRM has enjoyed over the years. We should see the Garmin-Sharp team using the new Garmin Vector pedal-based power meter, which finally launched last year after much delay. Showing interest too in the power meter market is Pioneer, a huge player in the electronics industry, and with the expertise to produce a good product. The Pioneer power meter was being raced by Team Belkin last year. We’ve yet to get a closer look at it.

Team Sky will need some sort of head unit to collect the data the Stages power meter spews out, and the company doesn't produce its own head unit, like SRM does for its cranks. With Stages using the ANT+ and Bluetooth protocols, it can easily be partnered with a suitable computer, like a Garmin Edge. Team Sky hasn't announced what they'll be using, but a bit of hunting around on its Facebook page does show what appears to be Garmin Edge 510 in this photo,  and there are what look like empty Bar Fly out-front mounts on some of the other bikes, at its training camp in Majorca. An update on the Garmin story, it does look like Team Sky will be using Garmin this season. We've been sent a link to the Facebook page of Paint My Bike, an Australian paint shop, who on 26 December 2013 posted a photo of 130 Garmin Ege 500 and 810 computers being spray painted, replacing the Garmin logo with a Stages logo. It might be a while before all of Team Sky are on Stages. We spotted this photo on its Facebook page showing the team currently preparing for the Tour Down Under, and they’re clearly all riding SRM power meters. That said, the new agreement has only just been announced so we imagine Stages are rushing product out to Australia right now in time for the race start on Sunday.

For more on Stages go to the www.stagescycling.com. The UK distributor is www.saddleback.co.uk.

1
Top American gravel racer shot dead in Texas
2
What happens if you put a giant propeller on a bike? Plus new stuff from Rapha, Campagnolo, Ritchey, Selle Italia, Lezyne + more
3
Near Miss of the Day 769: Punishment pass
4
Cyclist arrested after police force rider off M3 motorway
5
Delivery driver did not have a licence when he killed 89-year-old cyclist — jailed for 13 months
6
Near Miss of the Day 764: Fixed penalty notice for driver overtaking cyclist despite oncoming traffic
7
Just In: check out Classified’s super-innovative Powershift drivetrain
8
CeramicSpeed debuts aero rear derailleur cage