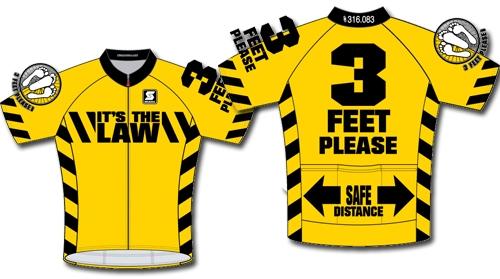 So how much room do cyclists need "plenty" says the Department for Transport...
by Simon_MacMichael

Since road.cc first reported on Tom Amos’s petition on Prime Minister Gordon Brown’s official site, the number of signatories has almost doubled from 785 to more than 1,500, but the petition has also sparked a lively debate within the cycling community about whether three feet is actually enough.

CTC, the cyclists’ organisation, believes that setting a three-foot passing rule isn’t sufficient. campaigns co-ordinator, Debra Rolfe told road.cc, “three feet is just not enough in this situation, and the Highway Code says to give as much space as you would do when overtaking a car. Of course, it’s very important that drivers give sufficient space when overtaking cyclists, but as to how much space, that depends on how fast the driver and the cyclist are going, and what the road conditions are more generally.”

However, the Highway Code lacks precision when it comes to how much space drivers should leave cyclists, a point made in our original story and in the many comments on it since, and one of the reason's for the 3ft petition in the first place. A spokesperson for the Department for Transport told road.cc, “our advice to motorists in the Highway Code is clear that drivers should leave plenty of room when overtaking a cyclist, especially if they are towing a trailer or are driving a large vehicle. ”

Although the specific distance isn’t defined, when asked what constituted “plenty of room,” the spokesperson said that “Rule 163 of the Highway Code adds that a driver should give cyclists ‘at least as much room’ as you would a car,” and that there is a picture illustrating this in the Highway Code.”

The problem is that “plenty of room” is a subjective measure and it suggests that three feet or not, there is a need in the UK to have a minimum passing distance clarified so that all road users know where they stand and so that questions of libability can be more easily settled when cyclists are 'clipped' by motorists.

In Europe there are minimum passing distances set in a number of countries, in France the rule is that motorists need to give cyclists a minimum of 1m in towns (just over 3ft) and 1.5m (just under 5ft) on other roads, Germany and Spain go for 1.5m.

Amos was inspired to start his campaign through the example of a US-based pressure group that has already succeeded in having a three-foot rule introduced in 11 US states, Texas became the latest to do so just a few days ago. In the US many cyclists expressed their support for the initiative by wearing yellow jerseys with the words ‘3 Feet Please’ printed in black letters on the back. Joe Mizereck from Tallahassee, Florida, the man behind the 3ft jerseys started a campaign earlier this year to get as many UK cyclists as possible wearing them.

Over here news of the petition is starting to make it through to the mainstream with the Guardian yesterday weighing in on the subject. News of the petition prompted Guardian blogger Ben Thomas to recount a near miss he witnessed at London’s Marble Arch, when a cyclist he was travelling behind came close to being sucked under a double-decker coach that left minimal passing room as it overtook him. Thomas says that when the cyclist remonstrated with the coach driver further up the road, he was asked, “how wide are your handlebars?”

If you are a British citizen or resident and haven’t already signed the petition, you can do so here or if you think three feet is not enough you can also start a petition on the Downing St website asking for British passing rules to be brought in to line with those in Germany, France and Spain. The Downing St site will not accept petition on over-lapping points, but when we searched for petitions on 'Minimum safe passing distances for over-taking cyclists" it couldn't find any related petitions.