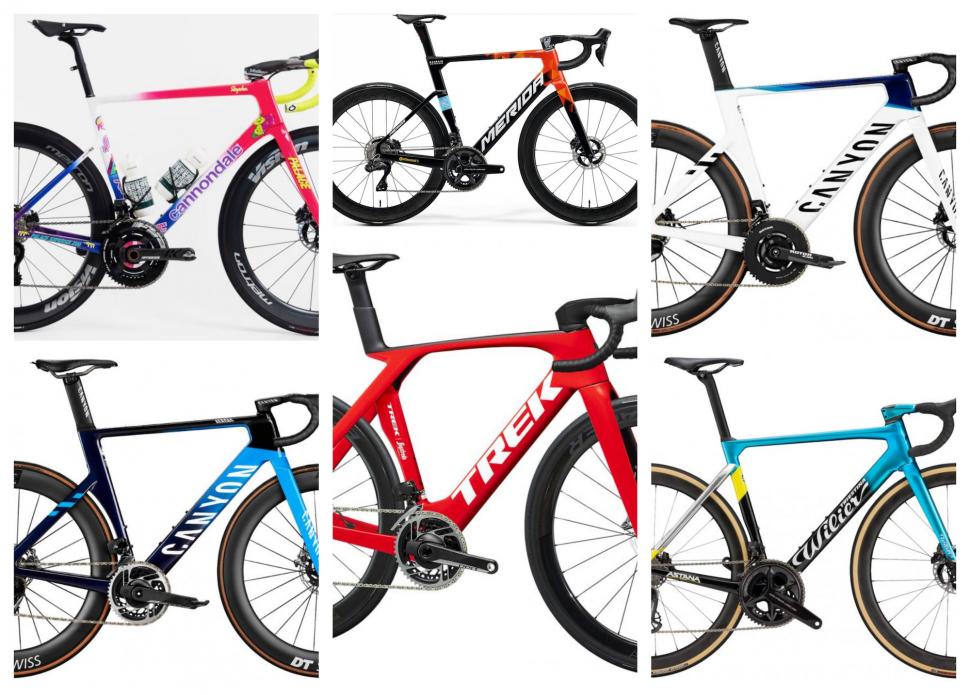 The Tour de France is well underway and here are some of the team bikes that you can buy yourself – as long as you’re willing and able to drop a whole lot of money on a new bike.

Brands often sell more affordable versions of bikes that sponsored teams ride, with spec downgrades to make price points, but that's not what we're covering here. No, these bikes are either virtually identical to those ridden in the Tour or ones with just a few differences. Essentially, they're of a similar level.

Sometimes there will be differences in components. A race team might have a deal with a certain wheel brand, for example, while the bike brand has commercial reasons for speccing product from a different company.

We’ve stuck with bikes that are finished in team livery or at least the same colours used by the relevant team rather than including models in standard finishes that just happen to be ridden by pro teams. If team colours don’t interest you, all of the framesets shown here come in other finishes too.

Every frameset that you see in the Tour de France is commercially available (or it will be soon) – that's one of the rules. Even if a bike brand doesn't offer a complete bike built up with the same components used by a particular team, you could put together a copy of anything ridden by the pros... if you have enough cash.

Here are bikes you can get your hands on that are the closest to those ridden by the pros at the Tour de France. 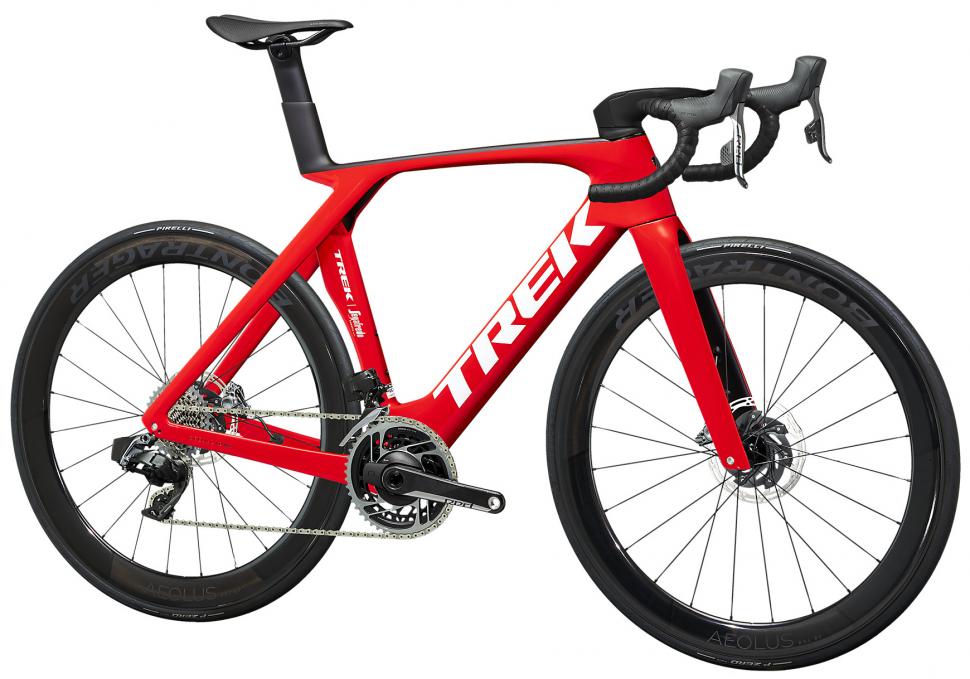 Trek’s brand new Madone (above), which the US brand bills as its “fastest road race bike ever”, features IsoFlow technology – a huge hole in the seat tube, essentially – that’s said to provide an aerodynamic benefit and save weight.

Trek-Segafredo use SRAM Red eTap AXS groupsets, Bontrager wheels, and Pirelli tyres, all of which are found on this bike. These bikes are built to order. 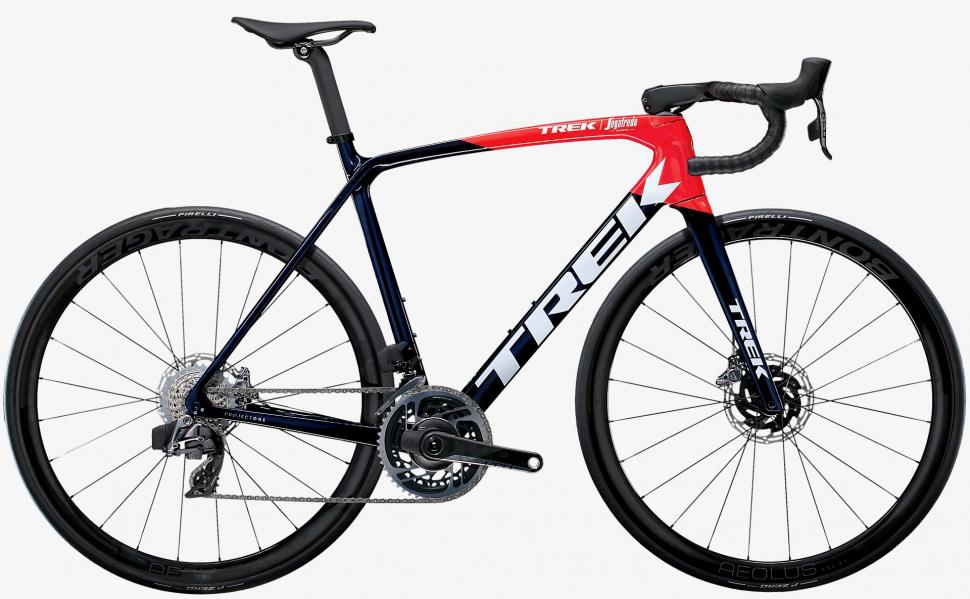 The Trek Emonda SLR (above) – the lightweight road bike in the range – also comes in Trek-Segafredo livery and a similar build, although it’s out of stock in every size on Trek’s website. 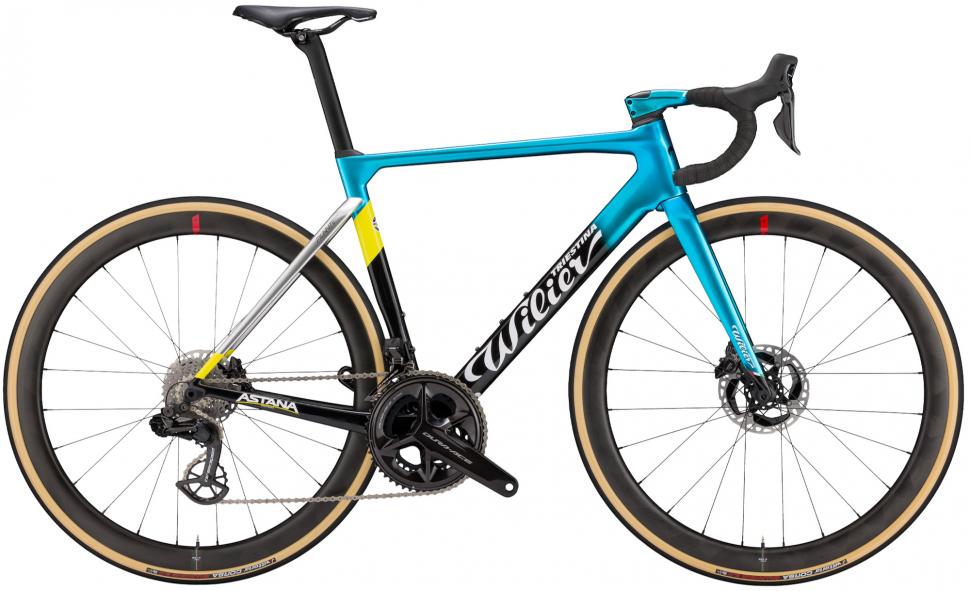 The Wilier Filante SLR aero road bike (above) and the lightweight Wilier 0 SLR (below) are each available in gorgeous Astana Qazaqstan Team finishes, as well as various other paint jobs. They’re both available in several different component specs with prices starting at €8,400. 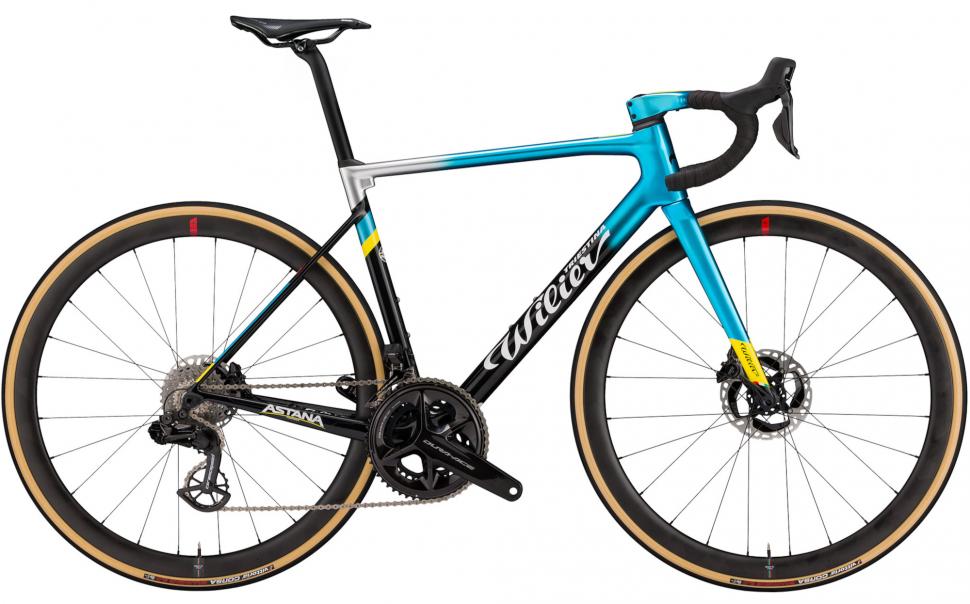 A build including Shimano Dura-Ace Di2 – the groupset used by Astana Qazaqstan – will set you back €11,300. That includes a Prologo saddle, which is what the Astana boys use, although you’ll get Wilier’s own wheels whereas the team bikes are fitted with Corima. That aside, this setup is close to the one you’ll see ridden in the Tour de France. 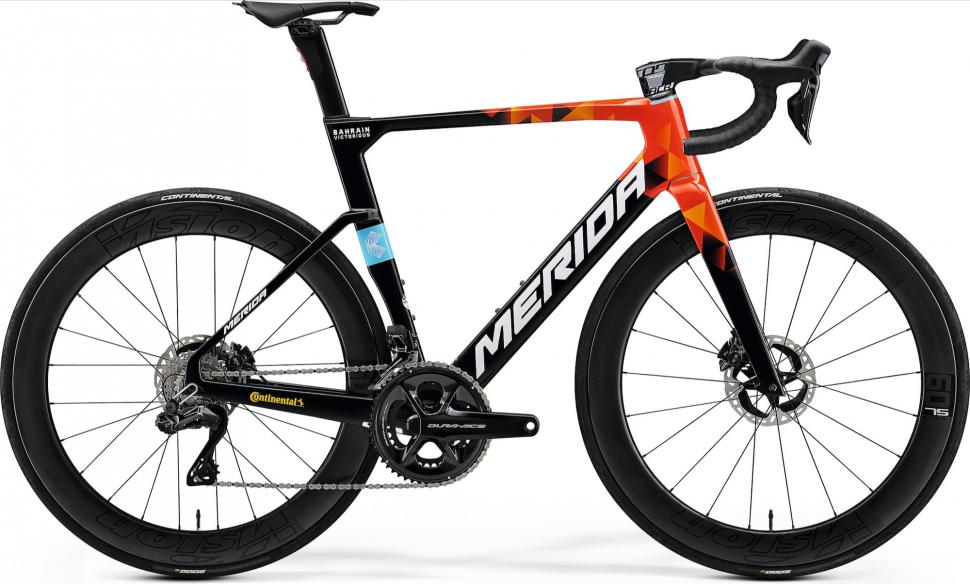 Merida offers both its Reacto aero road bike (above) and Scultura lightweight road bike (below) in Bahrain Victorious finishes.

Read our review of the Merida Reacto Team-E 2021

The specs are extremely close to those used by the pros with Shimano Dura-Ace Di2 groupsets, Vision wheels, Continental tyres, and Prologo saddles. 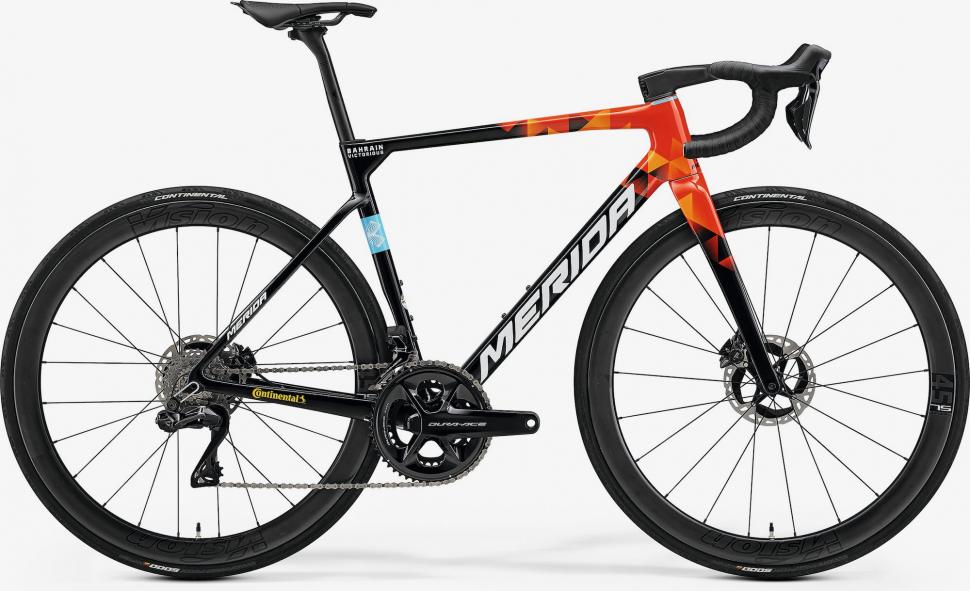 The Scultura Team comes with a Merida handlebar and stem whereas Bahrain Victorious use FSA/Vision products, but that’s about the only significant deviation. 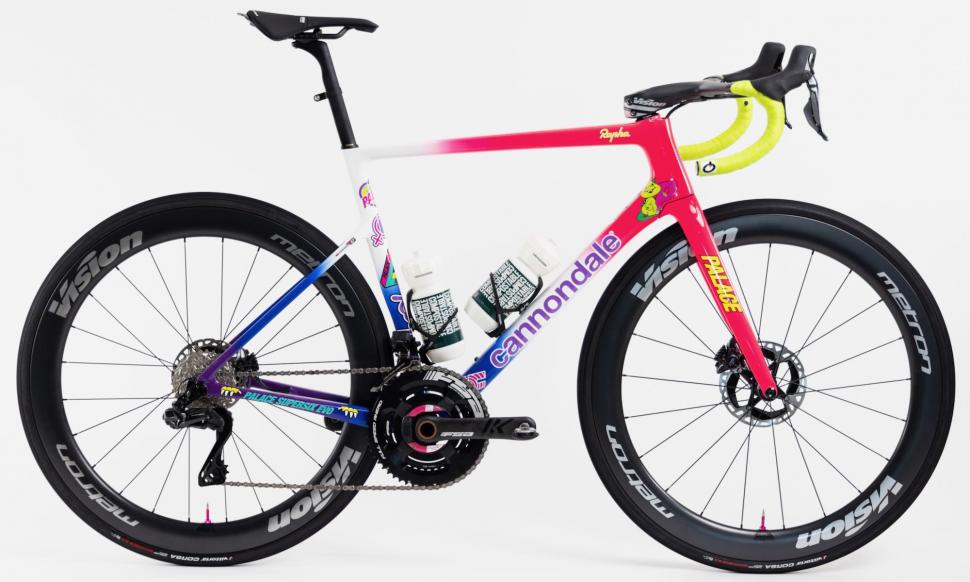 The most distinctive bikes in this year’s Tour de France peloton are EF Education-EasyPost’s Rapha and Palace Skateboards special edition Cannondales with finishes from doctorbobby.

Cannondale says that the designs, which also feature on the bikes that the EF Education-TIBCO-SVB women’s team will ride in the Tour de France Femmes, represent “the bold thinking and achievements of women in the sport”.

The Rapha and Palace Skateboards special edition Cannondale SuperSix Evo frame will soon be available to buy, although the on-sale date and retail price have yet to be confirmed. 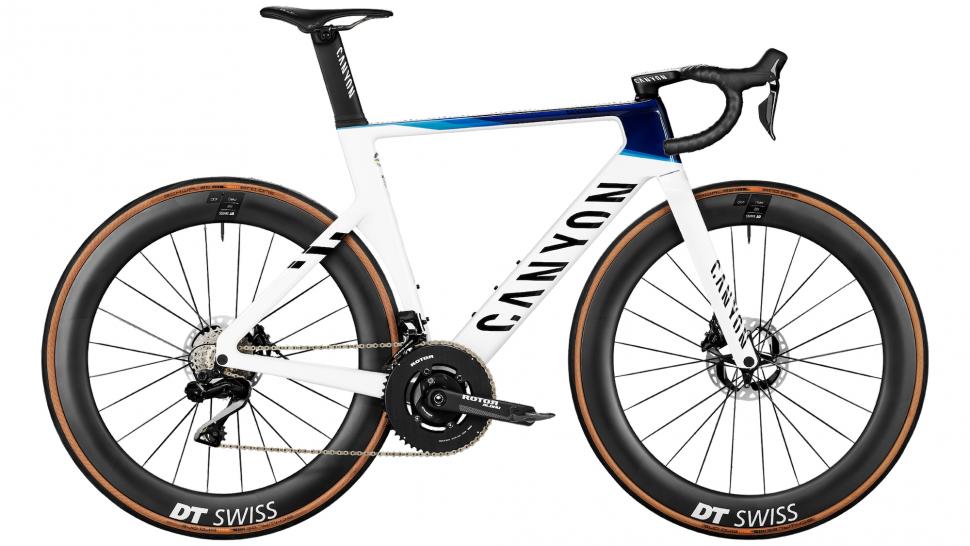 Canyon offers its Aeroad CFR Disc Di2 in a Alpecin-Deceuninck finish. As the name suggests, it’s built up with a Shimano Dura-Ace Di2 groupset, which is what the team riders use.

The bike you can buy is specced with DT Swiss wheels and a Rotor Aldhu24 chainset whereas the pros are on Shimano all the way. 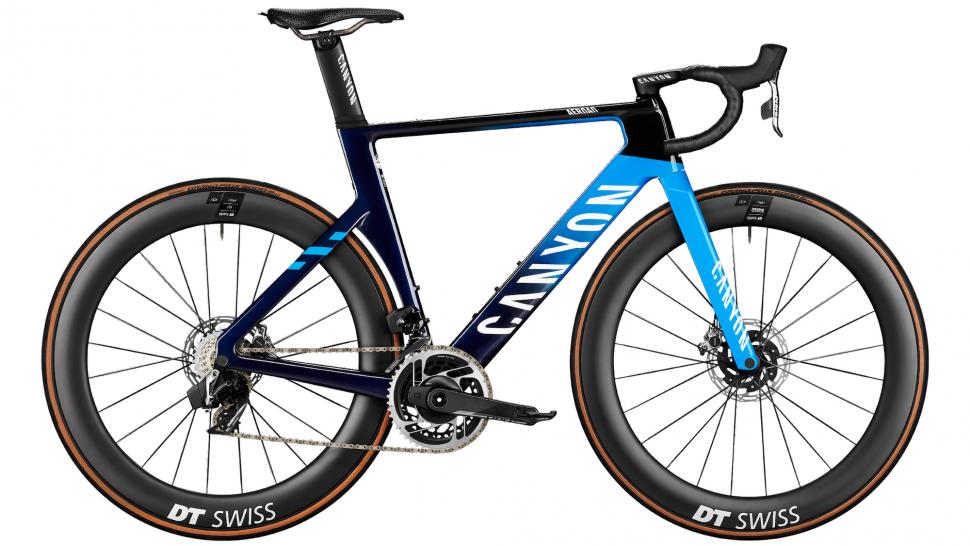 Canyon also offers its Aeroad CFR Disc in a Movistar finish and a SRAM Red eTap build, including the power meter. This is the groupset used by the Spanish team.

The replica bike gets DT Swiss wheels, though, whereas Zipp supplies Movistar.

Get loads more tech stories from the 2022 Tour de France