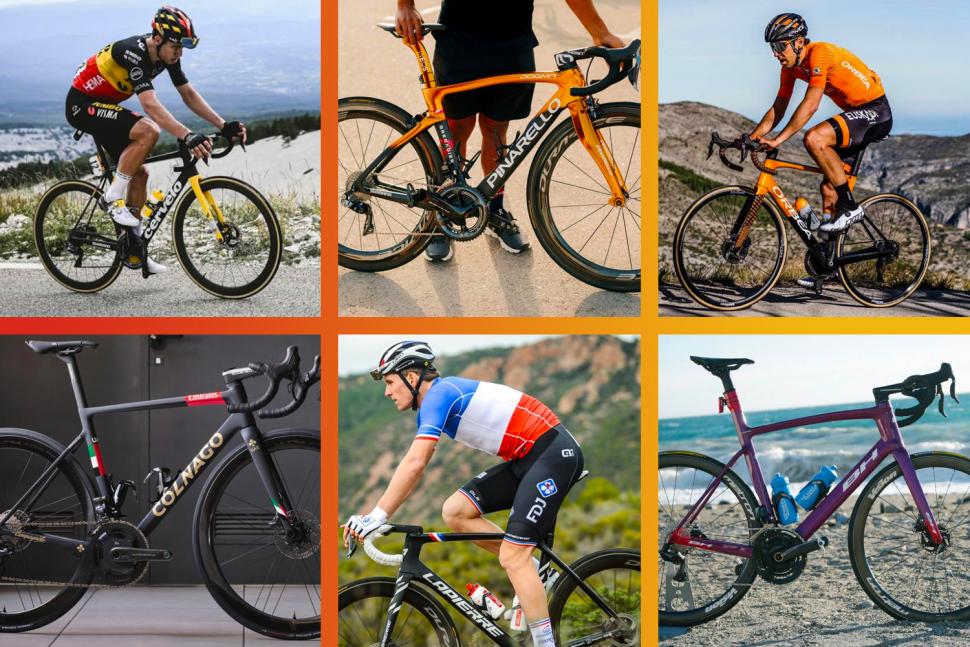 Check out the 2021 Vuelta a España race bikes

Take a look at the bikes the pros are riding this year from Specialized, Trek, Canyon, Pinarello, and loads more big names
by Liam Cahill

The 2021 Vuelta a España is your chance not only to see some of the best cyclists on the planet going head to head but also to gawp at the fastest bikes, and here they are in all their glory. 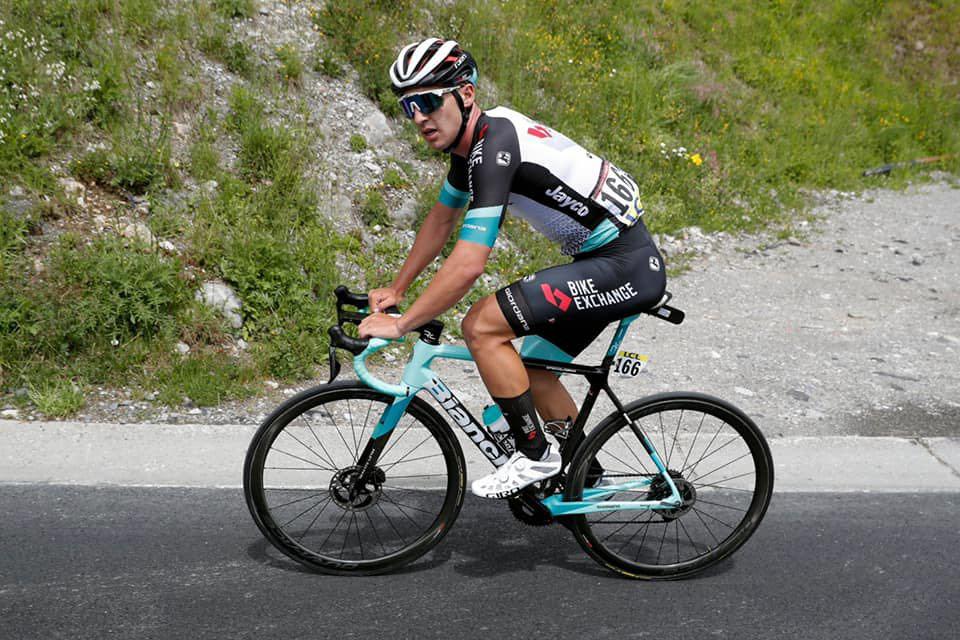 The Australian GreenEdge setup that is now known as Team BikeExchange have been using Bianchi bikes this season: the Oltre XR4 Disc and the Specialissima (pictured).

It's all about disc brakes for Team BikeExchange. They have Shimano's Dura-Ace Di2 groupsets along with Dura-Ace wheels and Pirelli tyres. 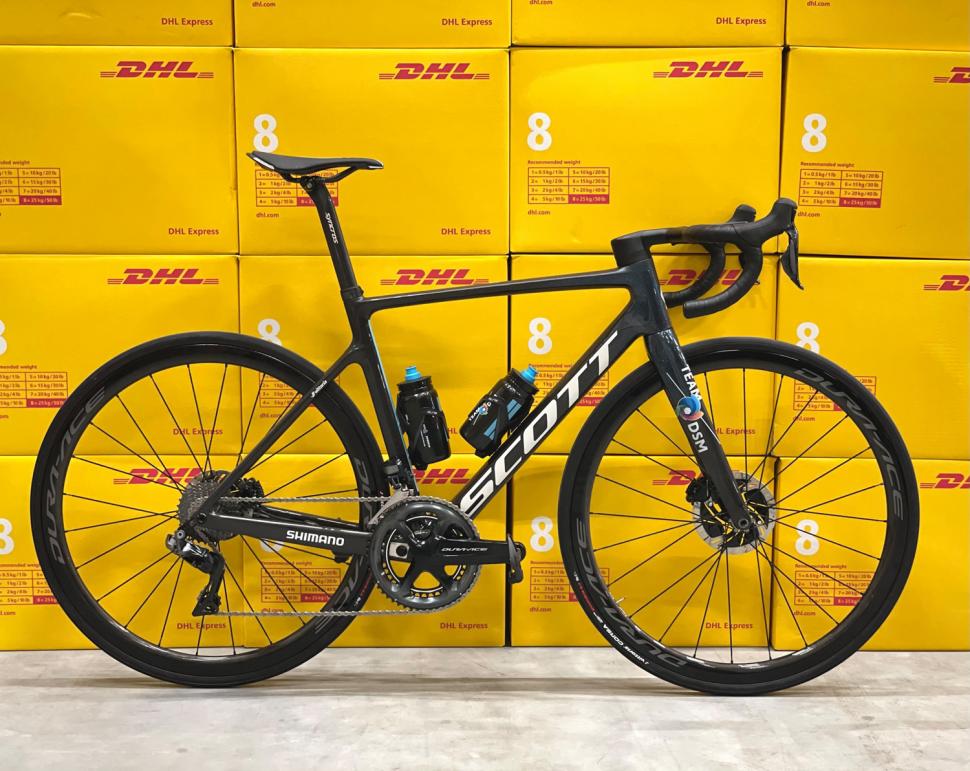 Meanwhile, Team DSM riders are on Scott bikes this year.

Here we have the Addict which is the preferred model. The team also has the Foil for flatter days and it's a full disc setup with Shimano Dura-Ace Di2 groupsets and wheels. The team has already been spotted using the as-yet-unreleased 9200 Series Dura-Ace Di2 so this could make an appearance in the Vuelta. We just don't know, so keep your eyes peeled.

Jumbo–Visma have been riding Cervelos since the start of the season. This one is the R5 and is designed for the climbers. Jumbo–Visma has stayed with Shimano for 2021 but switched from rim brakes to disc brakes.

The sprinters will have the S5 which we reviewed just after its launch. FSA provides the finishing kit. 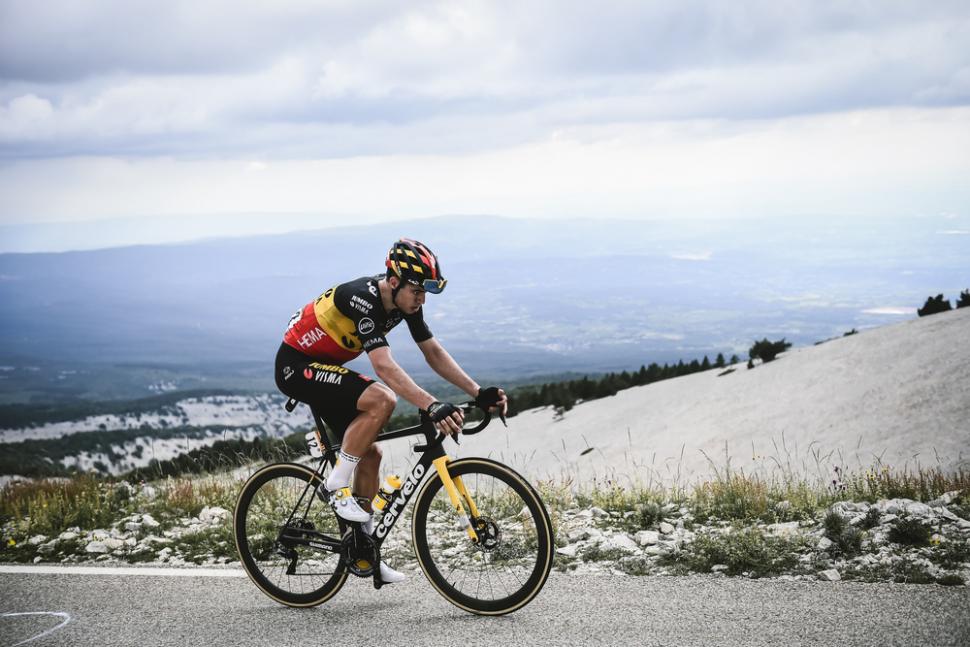 Look out for the unreleased update of the Cervelo R5 too, which team members have been racing over the past few months 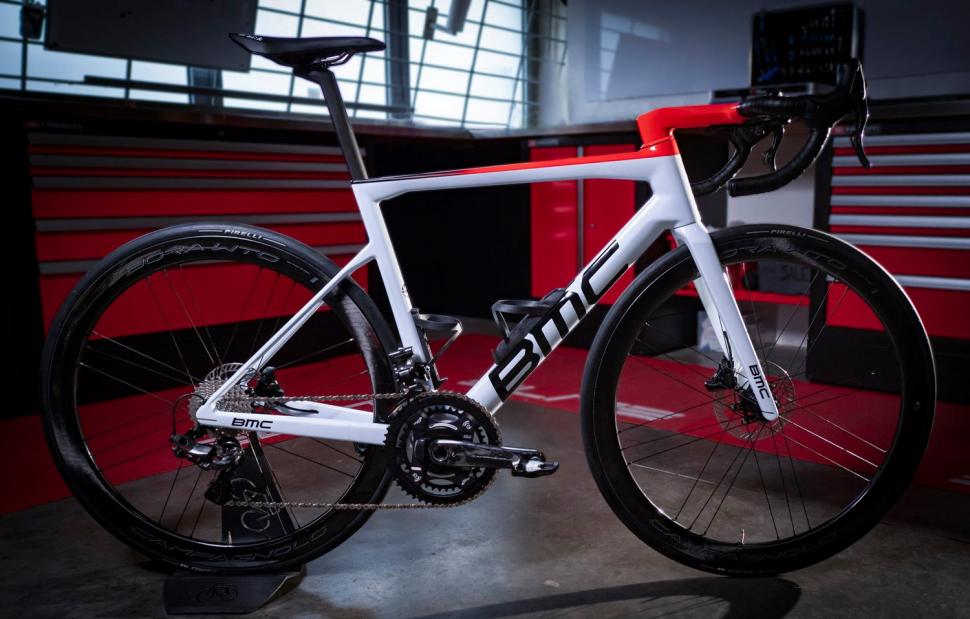 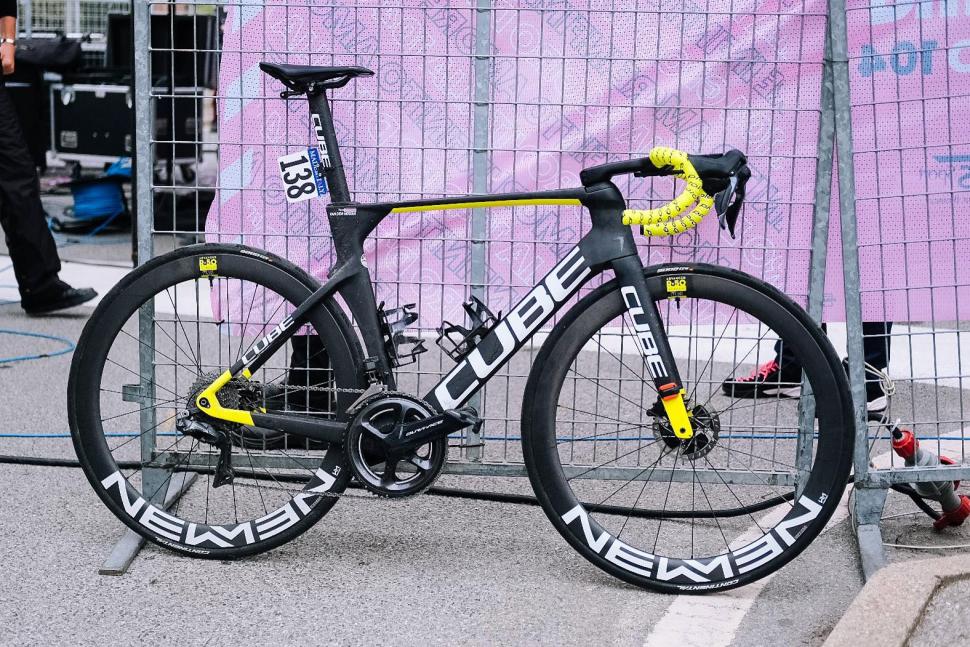 Intermarché riders use the Lightning C:68X SLT. The Continental tyres and Shimano Dura-Ace Di2 groupset remain from previous years but the wheels are now from Newmen rather than Fulcrum. 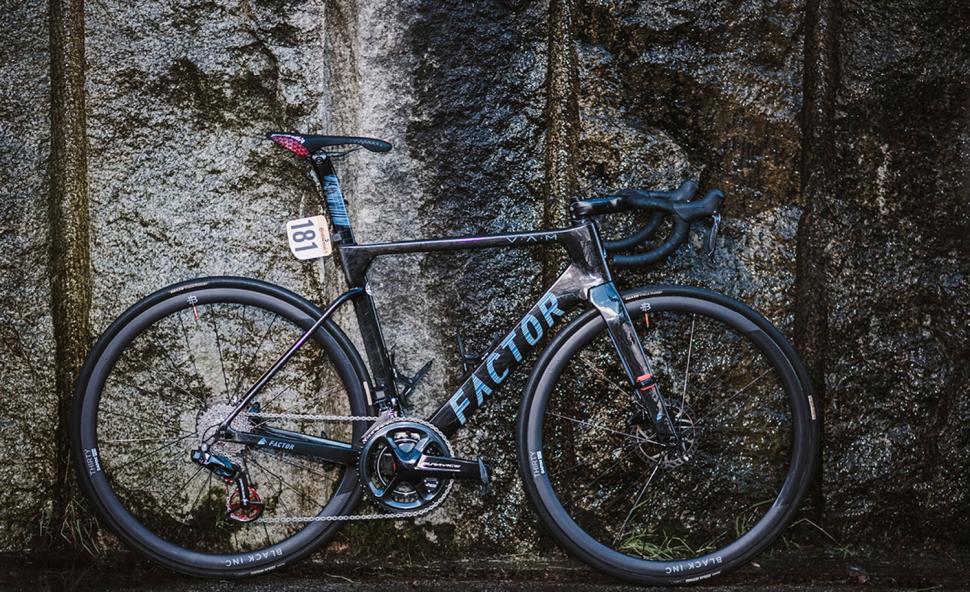 Israel Start-Up Nation (ISUN) hasn't changed anything about its bikes from 2020.

Pictured above is the Factor Ostro VAM and, as ISUN rider Alex Dowsett covered in this overview video last year, the team isn't contracted to a particular groupset, allowing them to customise their componentry.

Interesting additions to the Shimano Dura-Ace Di2 Disc groupsets are SwissStop brake pads and rotors (we've reviewed them) along with a CeramicSpeed OSPW on the rear derailleur. 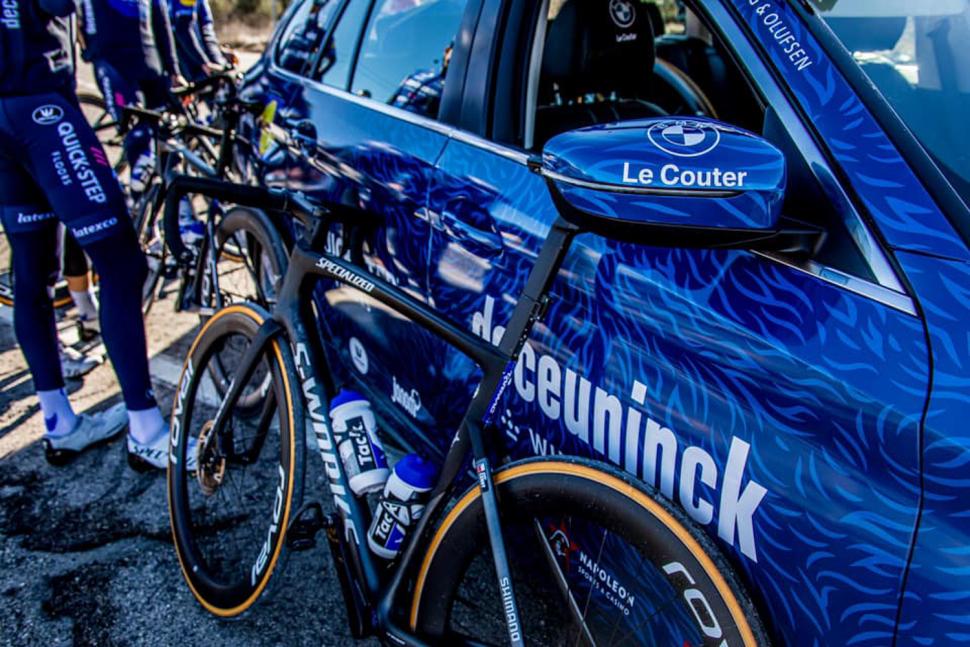 It's a case of one bike to rule them all for the Wolfpack with the Tarmac SL7 decked out with Shimano Dura-Ace Di2 Disc groupsets, 4iiii power meters, Roval wheels and S-Works finishing kit. Pro also gets involved, providing the handlebars. 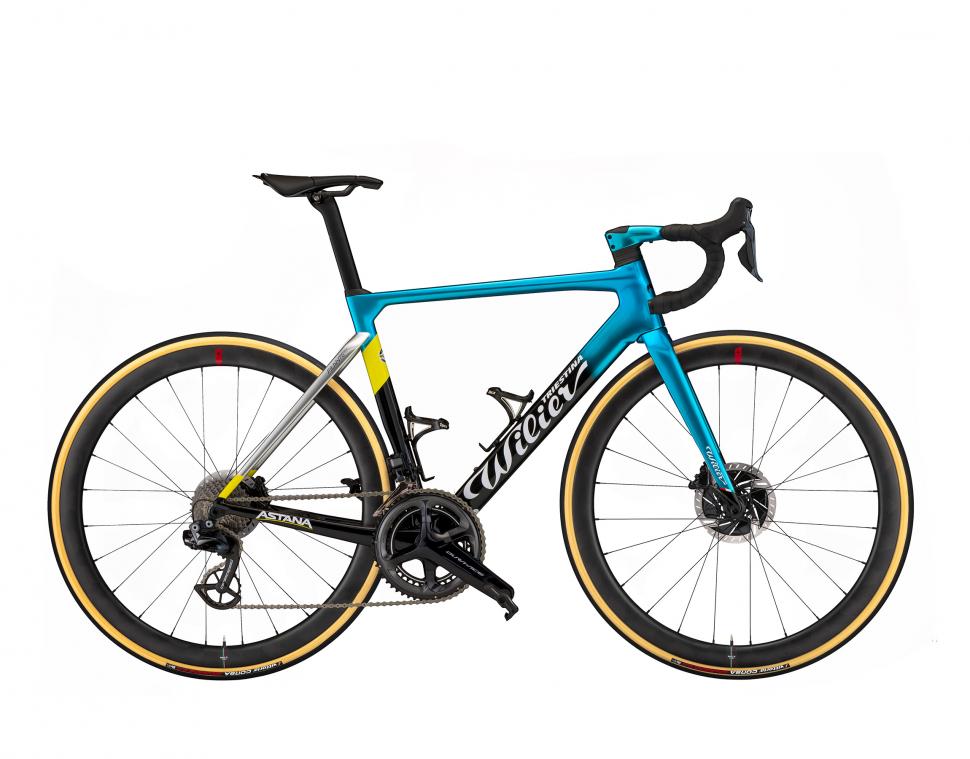 Astana riders go with the Wilier Filante SLR aero road bike, and the 0 SLR for the big mountain days. They have possibly the nicest paint job in the peloton.

In a change from the picture above, the Astana team uses Corima wheels. It's a lovely setup. 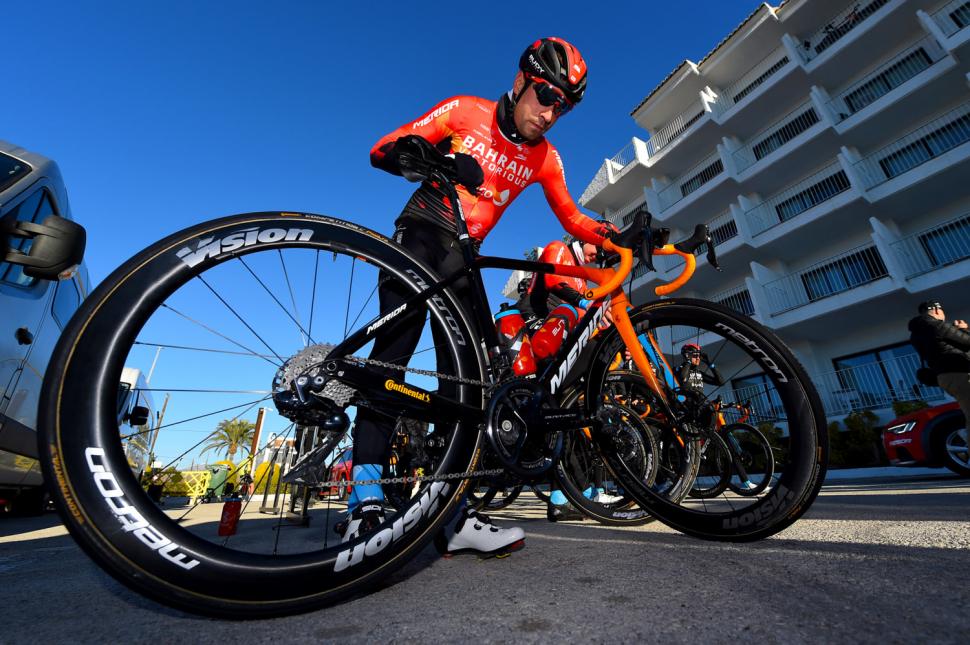 The only change from the test bike we rode to the race bike is that the Vision wheels for racing use tubular tyres. 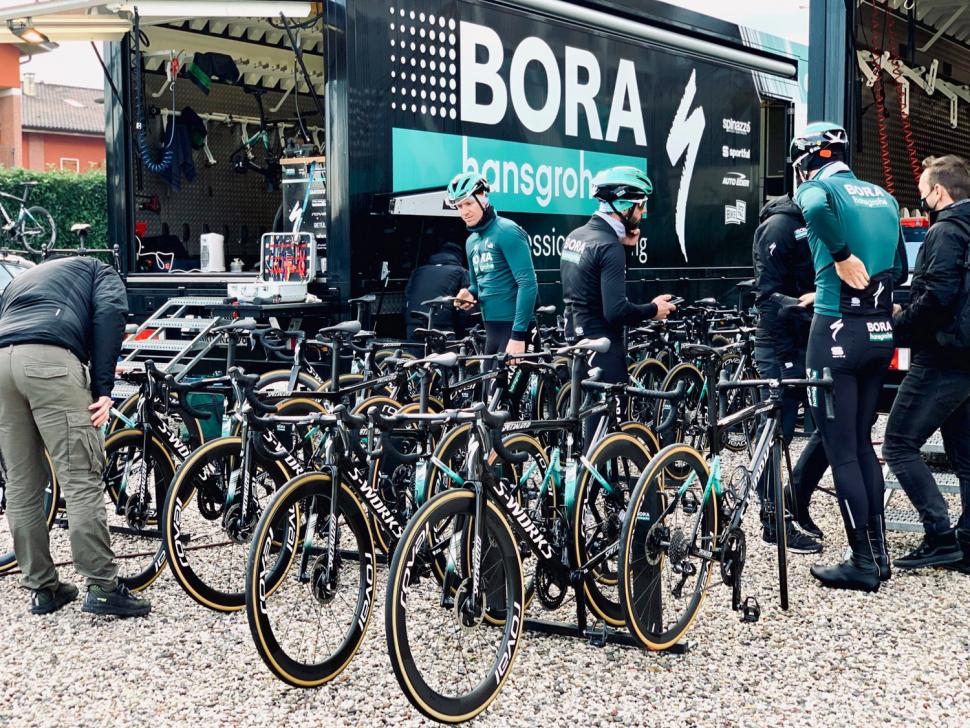 Bora sticks with the Tarmac SL7 and the bike is identical (save the paintwork) to the Deceuninck–Quick-Step setup (above). 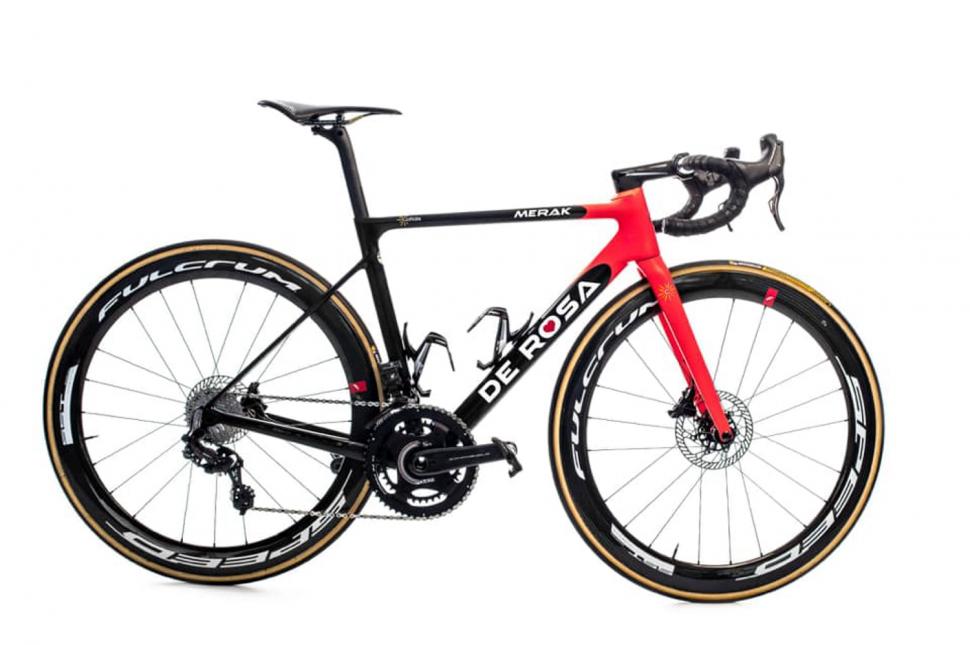 Guillaume Martin ensured that the bike was on our screens for the entire Vuelta last year as he went off in search of KoM points. 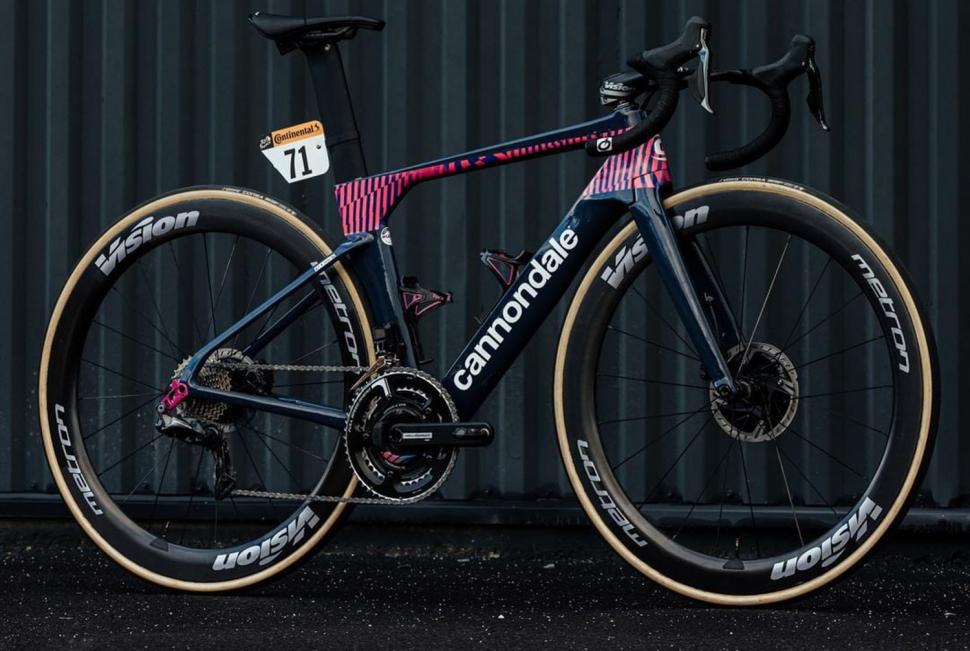 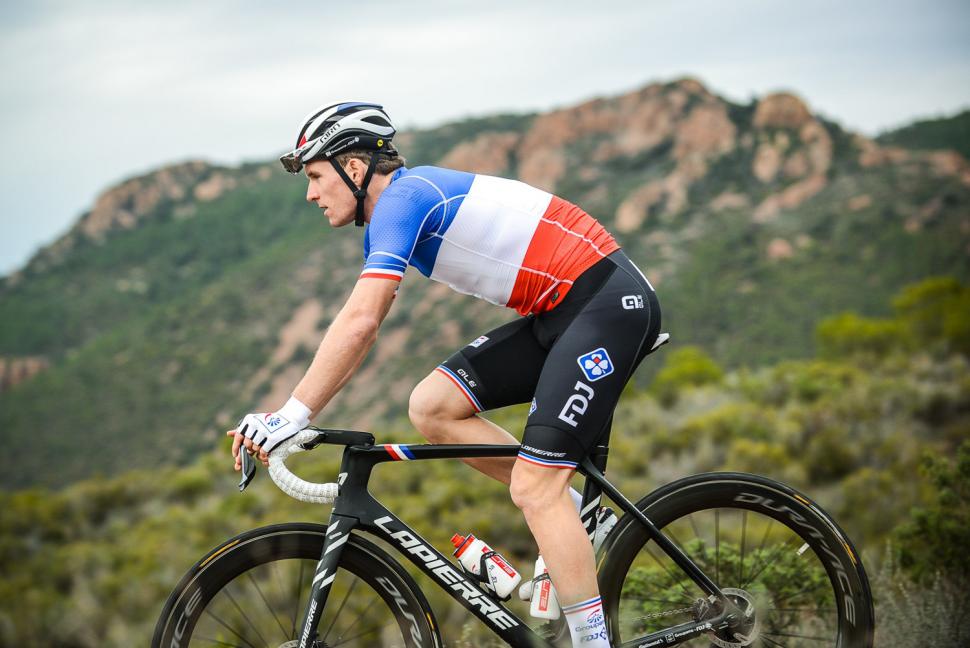 It's all the same as last year for FDJ with Lapierre bikes, Shimano Dura-Ace Di2 Disc groupsets and wheels, and Pro finishing kit. 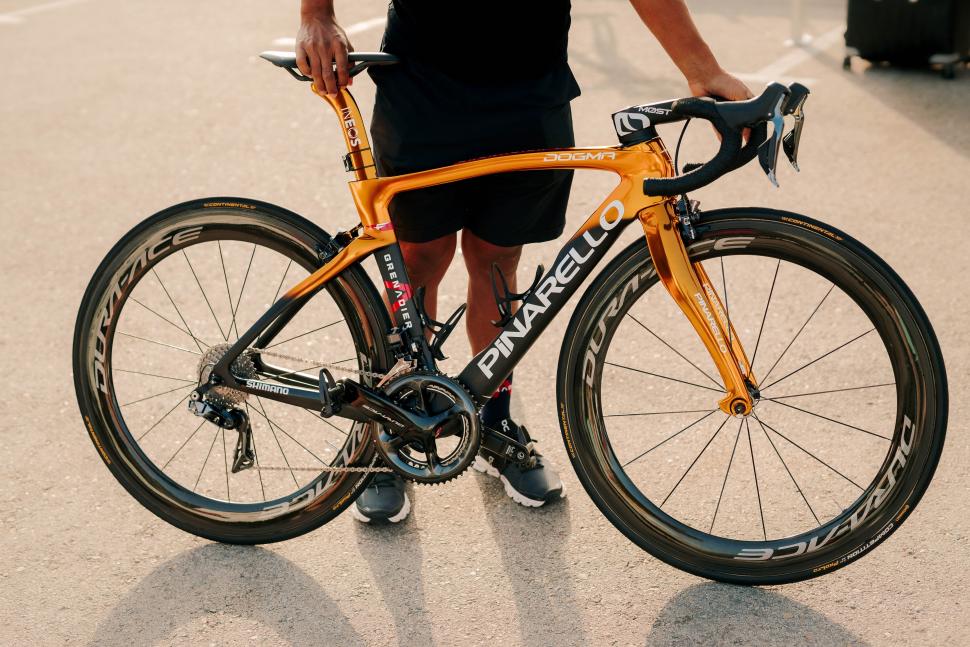 Ineos Grenadiers have been riding the new Pinarello Dogma F since just before the start of the Tour de France.

Pinarello claims that the Dogma F frame is 9% lighter than that of the F12 and the fork is 16% lighter. It also says the rim brake version that Ineos Grenadiers use is “3.2% more aerodynamic” than the equivalent Dogma F12.

Ineos Grenadiers use Shimano Dura-Ace Di2 groupsets and Shimano's wheels most of the time, although riders will occasionally break out hoops from other brands (Lightweight and Princeton Carbon works have been used in the past) when they feel the time is right. 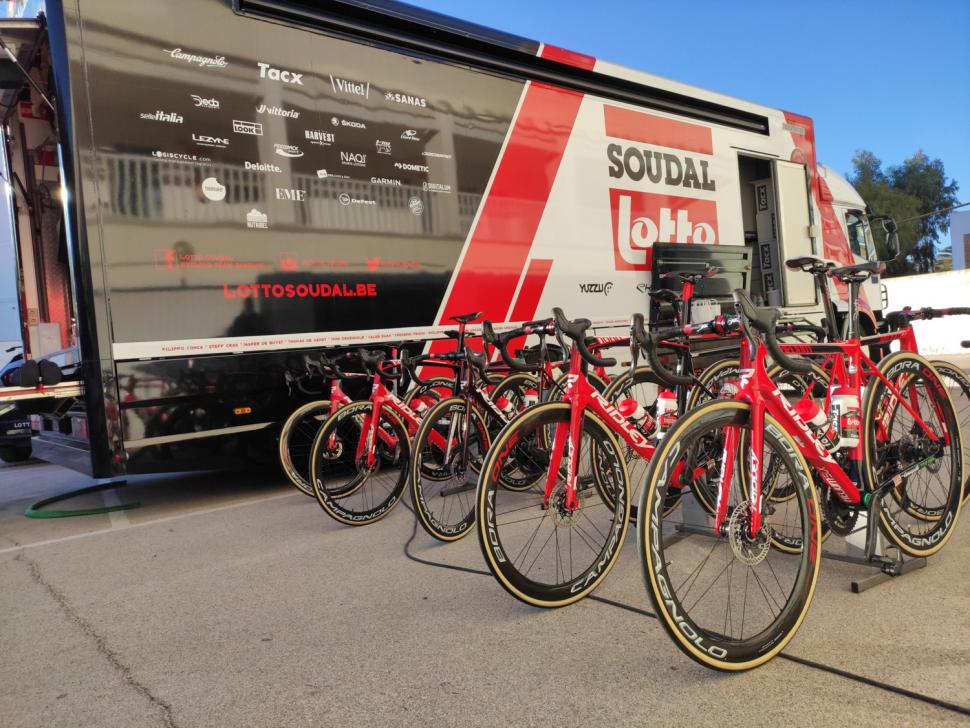 Big Belgian team, meet big Belgian bike brand. Ridley must be happy with the return it gets from Lotto Soudal.

Riders have the choice between the Helium and the Noah for hilly and flat days respectively. The rest is an all-Italian affair with Campagnolo Super Record EPS Disc groupsets, Bora wheels, Vittoria tyres and Deda finishing kit. Down at the bottom bracket, you'll find C-Bear ceramic bearings. 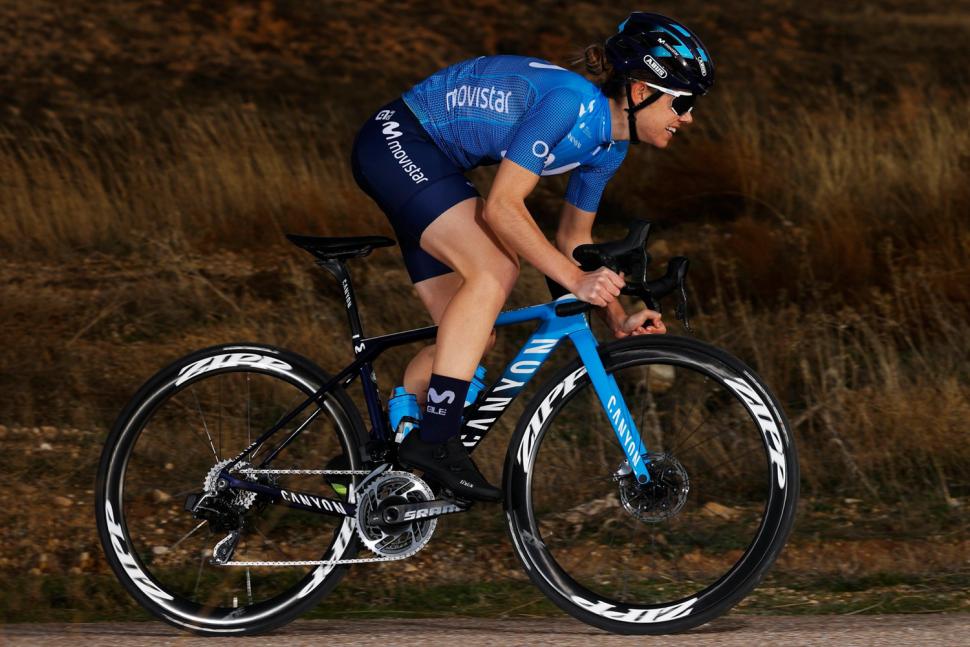 If you're a fan of SRAM then don't worry, Movistar sticks with the wireless shifting in 2021. Their bikes all get a Red AXS Disc groupset with a built-in power meter.

The squad has access to the latest Aeroad (earlier tech problems having apparently been sorted) and they've got the Ultimate too, should they want something different for the climbs. Zipp wheels and Continental tyres finish the bike. 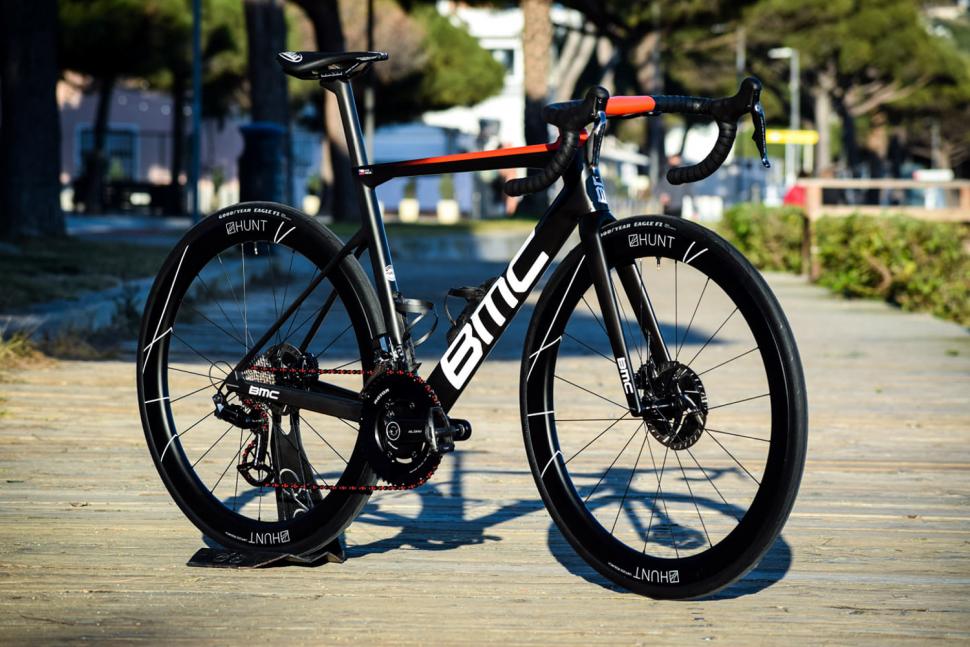 BMC provides the Team Qhubeka NextHash framesets which are built up using components from a mix of brands.

British brand Hunt makes a big step up to World Tour level, here providing its Limitless 48 wheels which we just awarded Editor's Choice in our Best Wheelsets of 2020. Goodyear's tyres feature. Sometimes the riders run tubeless and sometimes they use tubulars. 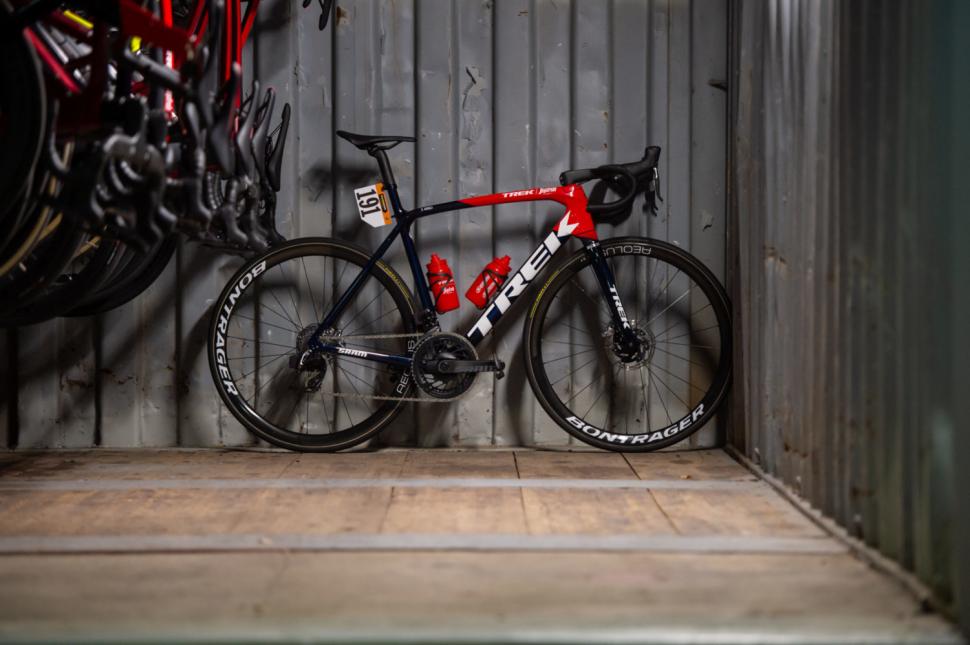 Trek provides its own team with the lightweight Emonda which is the primary bike for most races. That said, the more aero Madone also has a place.

SRAM gets its second and final Vuelta team, providing its Red eTap AXS groupset. Bontrager provides the Aeolus wheels along with the integrated bar/stem and the wheels come from Pirelli. 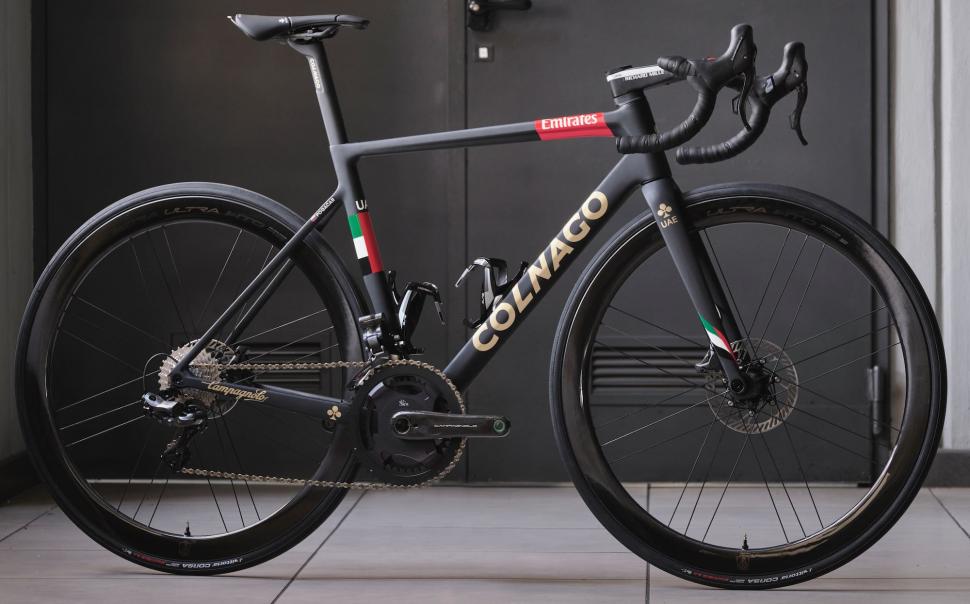 Colnago's V3Rs is UAE–Team Emirates' daily driver for the majority of races, but we have seen a few riders rolling on the C64. For the flatter days they also have the Concept.

Campagnolo continues supplying its Super Record EPS groupset in both disc-brake and rim-brake forms along with Bora Ultra WTO wheels. 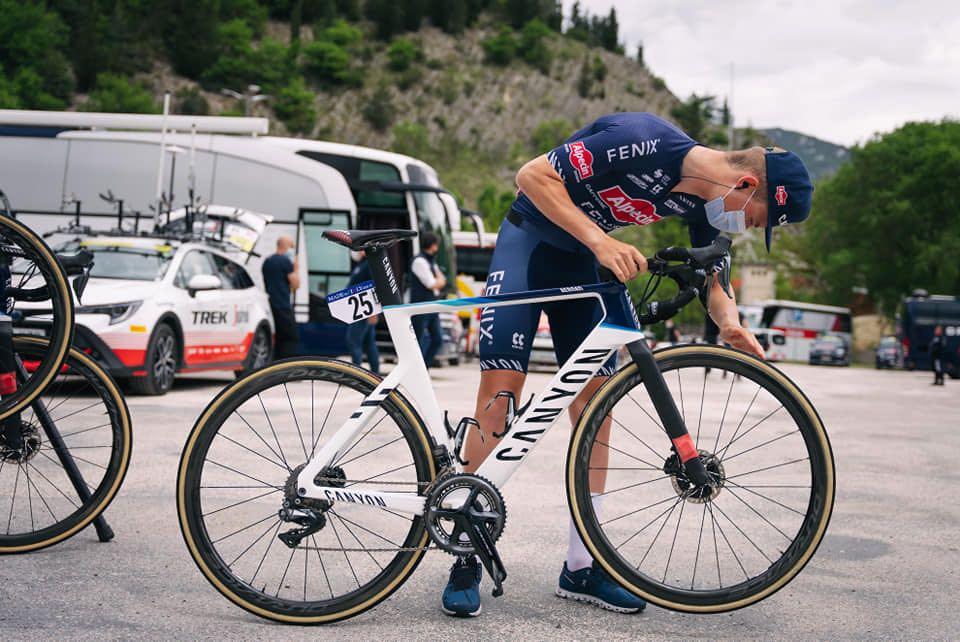 Alpecin-Fenix takes part in the Vuelta as the winner of the 2020 ProTeam ranking.

Like Movistar, Alpecin-Fenix use bikes from Canyon: usually the Aeroad (pictured) for the road stages and always the Speedmax for the time trials.

After tech troubles earlier in the season, some riders at the Tour de France were using Aeroads with external cables while the higher-profile riders were provided with bikes with internal routing, Canyon saying that it had solved the issue. It'll be interesting to see whether its updated system is rolled out fully at the Vuelta.

Whereas Movistar uses SRAM groupsets, Alpecin-Fenix goes with Shimano Dura-Ace Di2, including Dura-Ace wheels. At the time of writing, we don’t know if they’ll be on new 9200 Dura-Ace at the Vuelta, but it seems unlikely unless Shimano opts for blanket coverage across the peloton because larger teams will be closer to the front of the queue.

The tyres are from Vittoria, Selle Italia provides the saddle, and the bottles and cages come from Elite, so there are a few Italian brands represented here too. 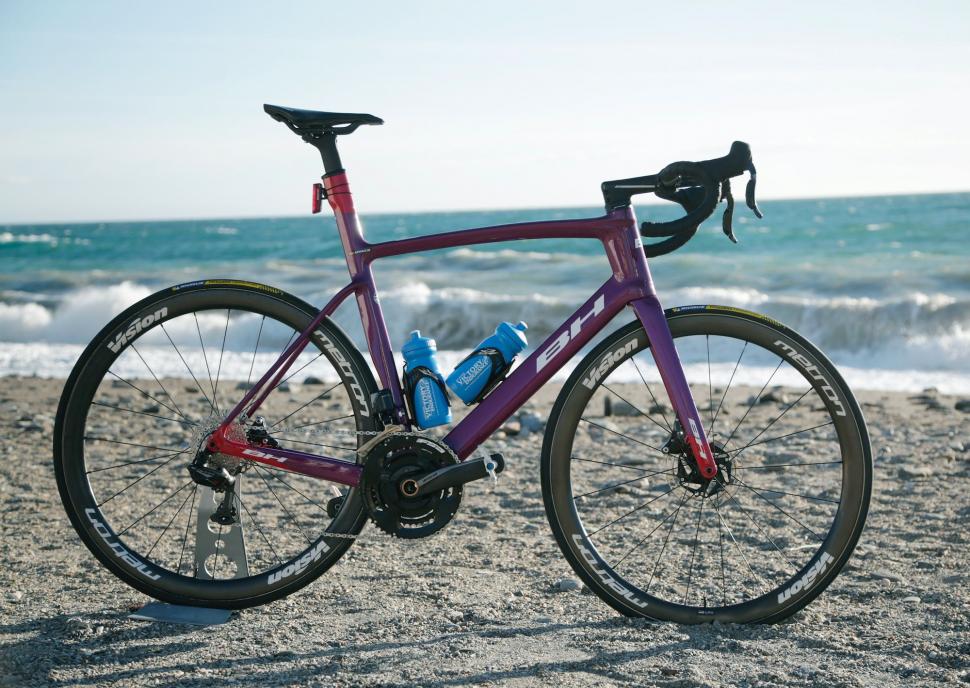 Not surprisingly, riders from UCI ProTeam Burgos-BH use BH bikes (the clue’s in the name): the Aerolight Disc for time trials and the G8 Disc for normal road stages.

The G8 is an aero frame that uses Kamm tail tube profiles, an internal seatpost clamp, and Vision/FSA’s ACR system where the cables/hoses pass through the inside of the handlebar, run along the stem and from there into the frame.

Burgos-BH is unique in the Vuelta in using FSA’s K-Force WE electronic groupset. FSA also provides the power meters and brakes (although the brakes on the TT bike are cable-operated TRP Spyres).

Read our review of FSA K-Force WE

Prologo supplies the saddles, the wheels are from Vision, and the tyres are Michelins 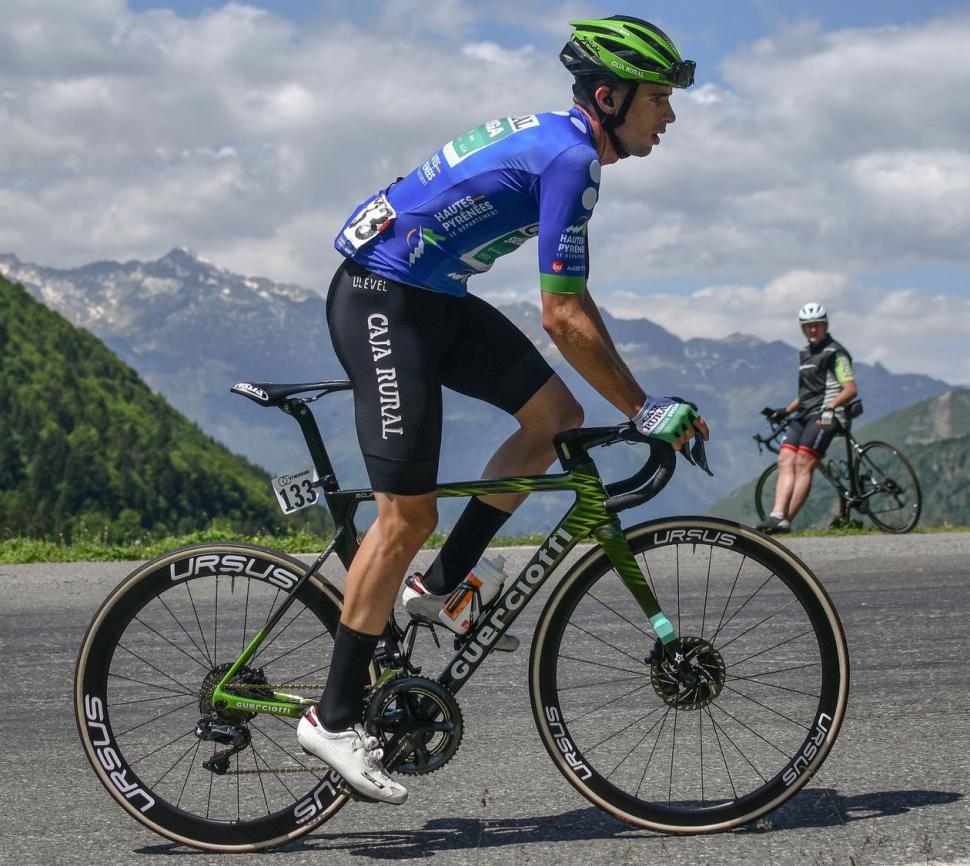 The Eclipse S Disc is a lightweight bike that features Guerciotti’s own integrated handlebar/stem with fully internal cables/hoses.

The wheels come from Ursus, another Italian company, and the team uses Shimano’s Dura-Ace Di2 groupset. 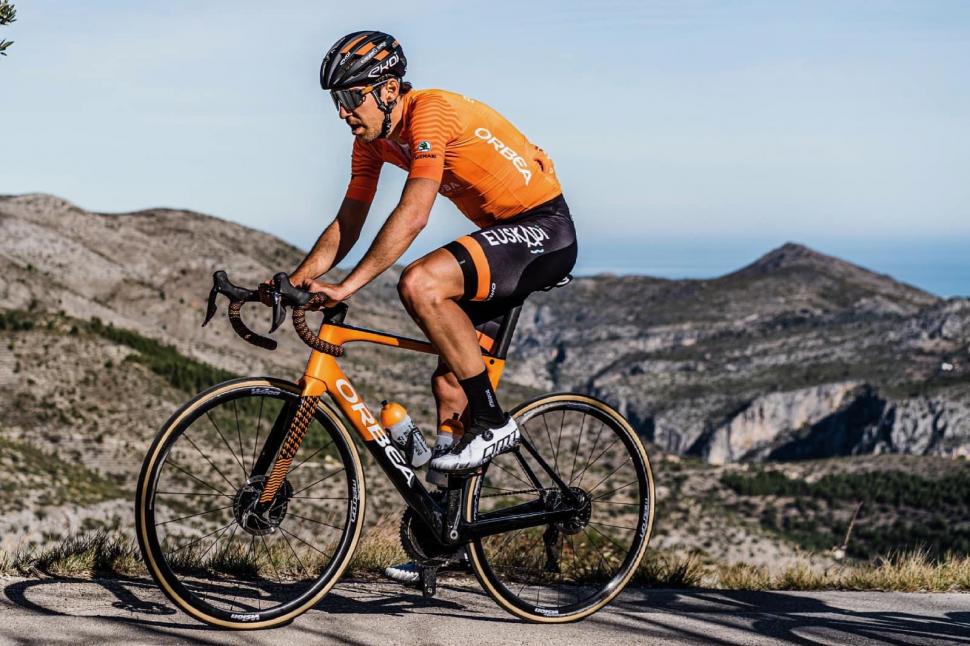 Euskaltel-Euskadi riders race on Orbea’s Orca road bike with cables and hoses routed inside an aero cover on the underside of the stem, an integrated fork crown and a hidden seatpost clamp.

The team from the Basque Country use Shimano Dura-Ace Di2 groupsets but with FSA chainsets/power meters and Vision Metron wheels. The saddles are from Prologo.

Shimano is very much the dominant provider of groupsets at this year's Vuelta a España with 16 of the 23 teams using Dura-Ace Di2. How many will get the as-yet unreleased 9200 version? All of them? None of them? We'll just have to wait and see.

Campagnolo is represented by four teams with SRAM providing the groupset components for two and FSA just one.