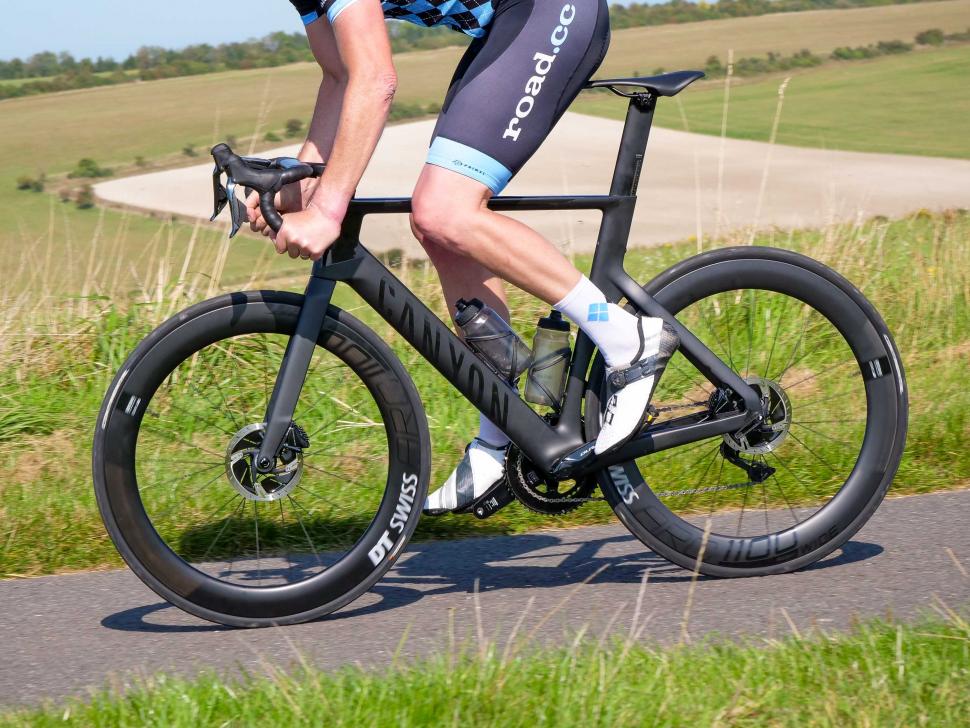 It has been a long time coming but Canyon’s new Aeroad 065 is worth the wait; this aero road bike is an absolute belter whether you’re flat-out sprinting, haring down your favourite descent or tackling the steepest climb in your area, and you can’t say that about every bike of this kind.

Okay, let's get a little bit of housekeeping out of the way to start with. Although the new Canyon Aeroad has only been officially revealed today, it has been spotted being ridden by various pros over the past year. We've had a sample bike here at road.cc for a couple of weeks on condition that we kept shtum about it until now. 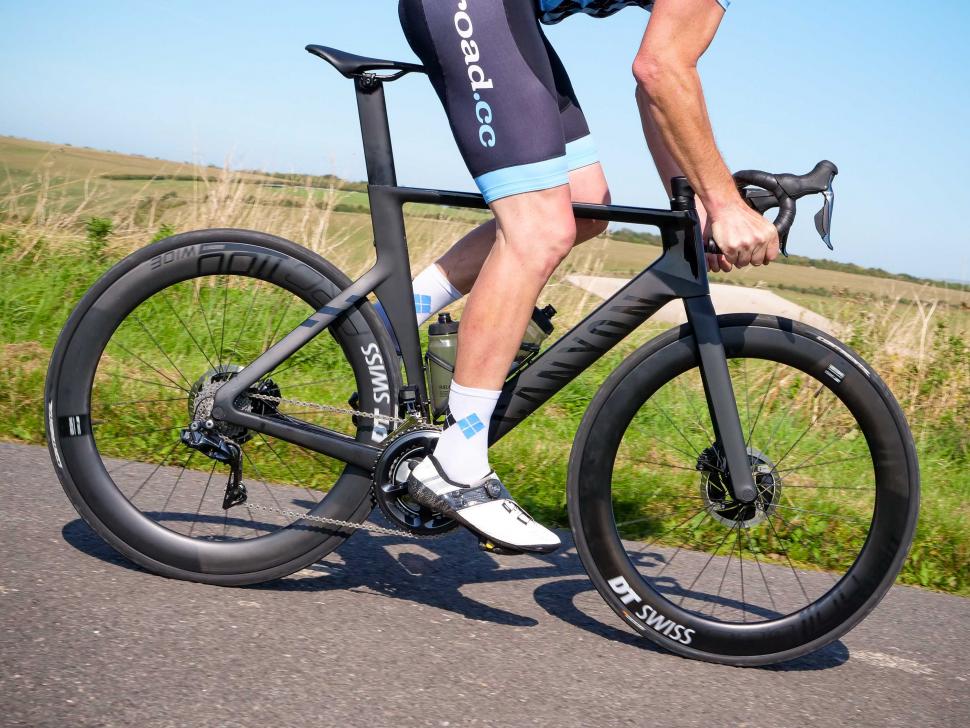 I got four or five rides in during that time – flat, hilly, and a bit of both – enough for a few early impressions but not for a full review. Then I passed the Aeroad over to road.cc colleague Dave Atkinson who also got a bunch of rides in before Canyon wanted it back.

One thing to mention up top is that I felt the bike fitted me really well. My ideal top tube length is 570mm and the Aeroad in a size L has a top tube of 572mm. I say that because bikes that fit you properly – rather than just there or thereabouts – generally leave a good impression. 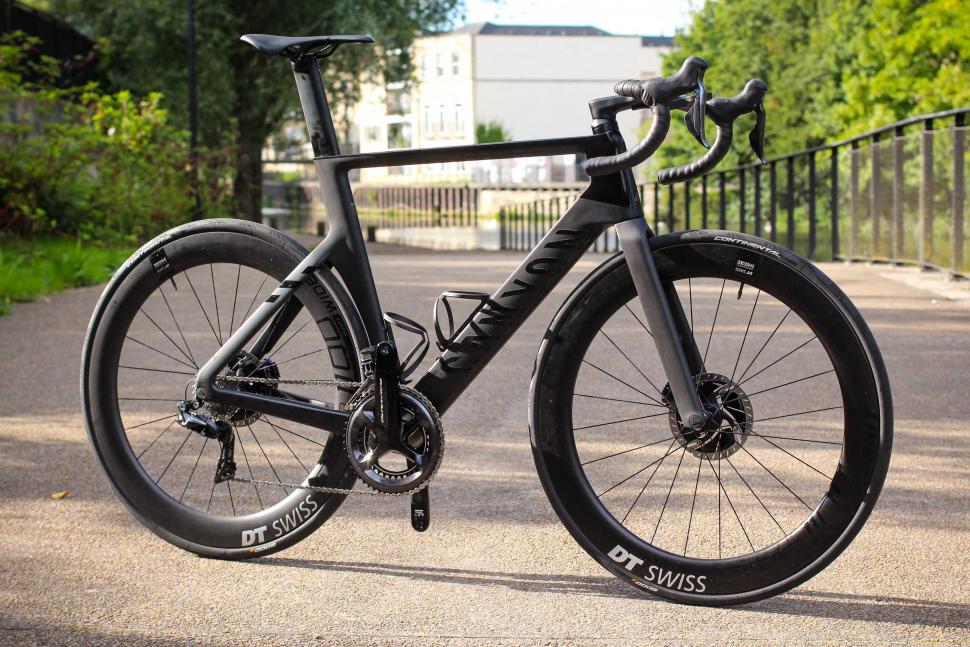 The other thing to mention is that we were riding the high-end Aeroad CFR (Canyon Factory Racing) model featuring the lightest and stiffest frameset in the range, in a Shimano Dura-Ace Di2 build. It's a £7,699 model. Again, that’s going to help the bike get off to a good start.

Now we have all those little caveats in place… this is a hell of a bike! 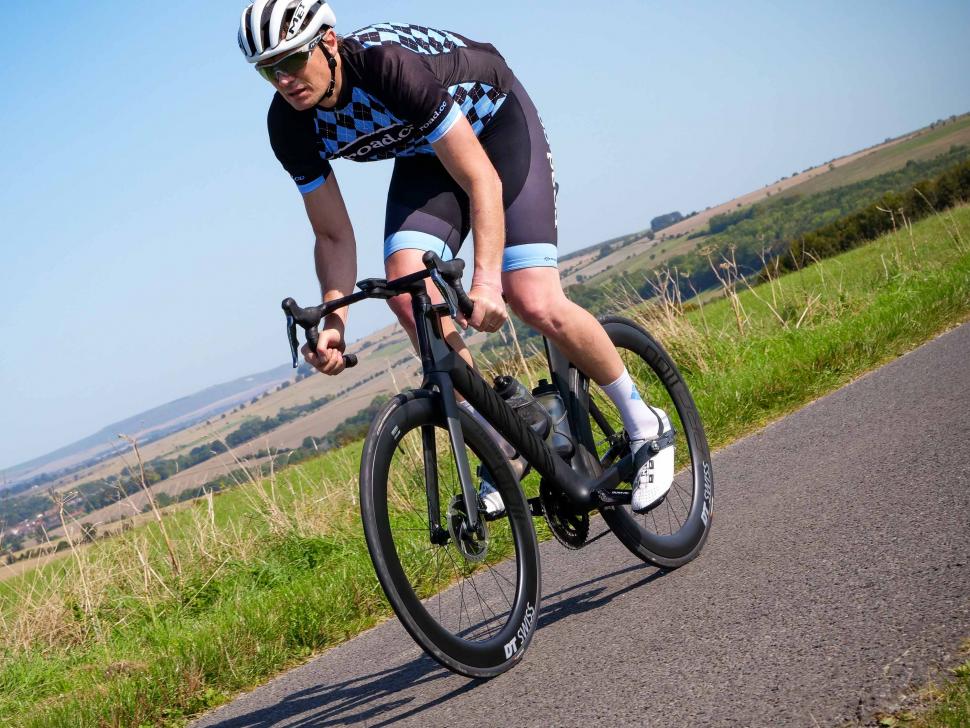 The first ride I went on was an hour’s lunchtime loop. I didn’t want to stop. As soon as I’d had my shower, I wanted to go out for another lap. This bike feels moreish.

The main point of a bike like the Aeroad is that it slices through the air with as little drag as possible. You can’t feel that aero efficiency, you either have to take it to the wind tunnel or read the brand’s tech reasoning and claims and see whether you’re convinced.

What you can feel is how responsive this bike is. Hitting the scales at 7.45kg (size large), it’s lightweight for a disc brake bike with 62mm-deep wheels (DT Swiss ARC 1100 Dicuts).

Of course, you can point to lighter aero road bikes but the Aeroad feels stiff with it – both at the bottom bracket and at the head tube – and gives a really direct feel when you stomp on the pedals coming out of a slow turn or want to accelerate away from other riders in a bunch.

Some aero road bikes offer loads of speed on the flat but start going backwards as soon as the tarmac heads uphill. The Aeroad, on the other hand, climbs beautifully. We’ve seen this year that being efficient at high speeds is no longer enough, bikes like the Specialized Tarmac SL7 and the Factor Ostro combining their aerodynamic technology with a light weight.

The Aeroad might not be as light as either of those – Canyon claiming a size medium frame weight of 915g and a fork weight of 425g – but it feels at home in the hills. You forget that it’s an aero road bike because it’s so nimble on the climbs, and the fact that this bike feels ridiculously chuckable – perhaps partly down to a shorter wheelbase than previously thanks to a reduction in chainstay length – makes it a whole lot of fun on the descents.

I mentioned stiffness earlier; one element that you don’t need to worry about here is the handlebar. Canyon has done something innovative here, the CP0018 Aerocockpit (combined handlebar and stem) fitted to all Aeroad CFR and CF SLX models featuring a wing section on either side. 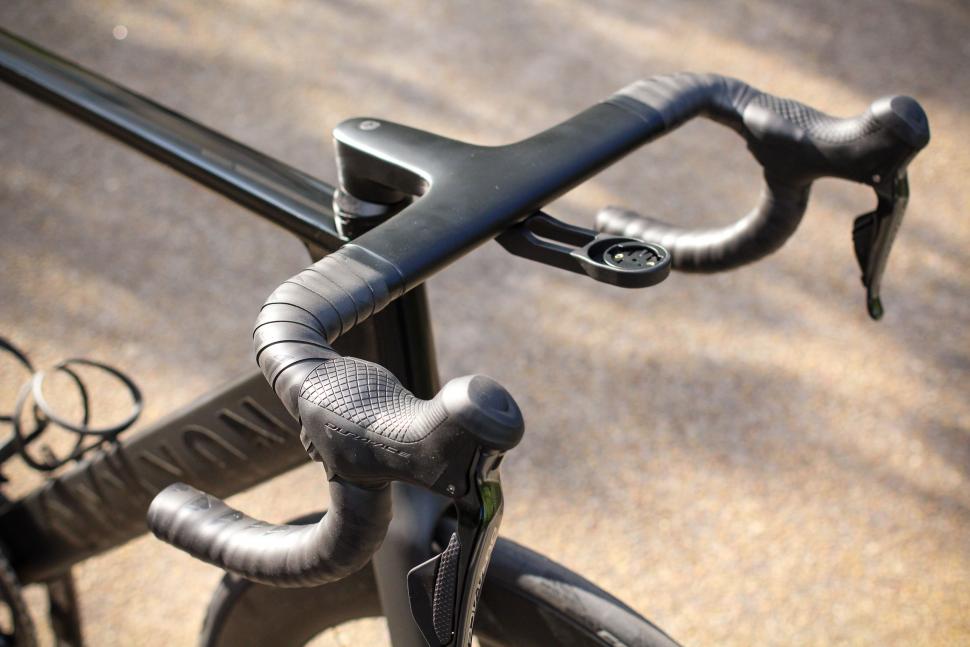 The stem and the central portion of the tops are one piece, and the outer sections of the tops and the drops are separate. In other words, the Aerocockpit is made up of three separate parts, the wing sections each being held in place by two clamping screws. 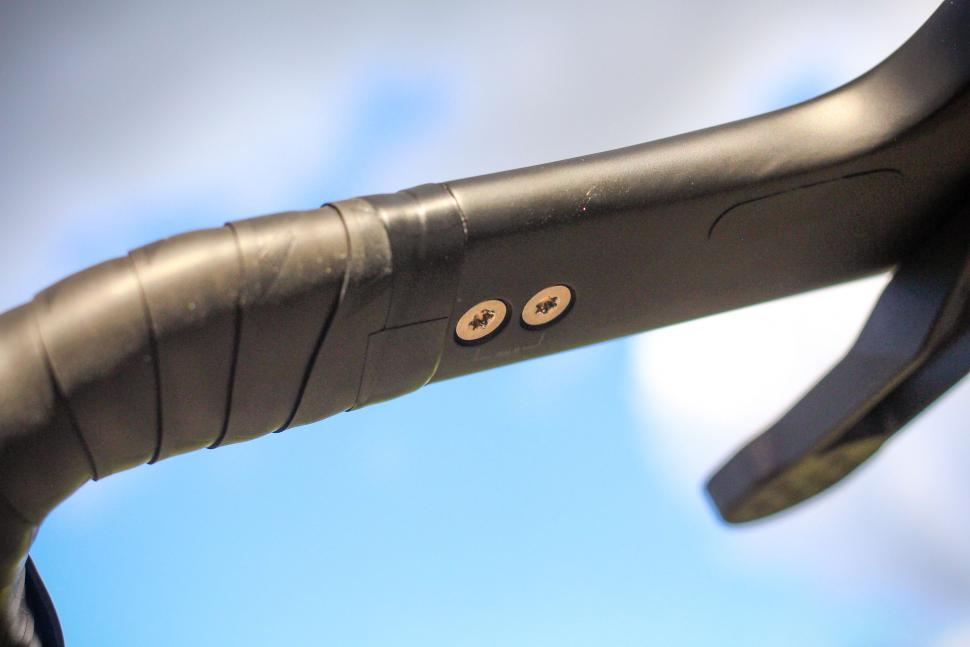 This has two advantages. First, you get 40mm of width adjustment. Second, when you need to transport your bike in a box, you can loosen the screws and fold the wings down.

Very clever, but you might wonder whether this extra joint leads to unwanted movement when you’re out of the saddle and hauling on the bar when sprinting or climbing. Or maybe you’re worried about the opposite, the bar feeling mega-stiff because it’s double-layered where the sections overlap.

Well, I couldn’t make Canyon’s presentation of the new Aeroad – Dave went instead – and I didn’t know anything about this new design feature until the tech notes came through a couple of rides down the line. I'd clocked the bolts but hadn't had time to investigate. At no point was I wondering why the bike was fitted with a handlebar that behaved oddly. It just felt absolutely normal in use.

Canyon has altered the geometry of the Aeroad this time around to make it more similar to that of its Ultimate lightweight road bike. On the size large bike that I was riding, the stack has been increased from 570mm to 580mm and the reach has been shortened from to 403mm to 401mm. That’s enough to notice. Canyon’s rationale is that this is a geometry that’s accessible to more people.

This means that the ride position is a little less aggressive than previously, but it’s not what you’d call relaxed in the overall scheme of things. Canyon hasn’t gone nuts and built its aero bike to some endurance bike geometry! It is a significant difference, though. The stack/reach of the previous model in a size large was 570/403, which is 1.41. The stack/reach of the new version in a size large is 580/401, which is 1.45 (the figure varies between sizes).

Canyon says that its new CP0015 Aerocockpit has has flatter profile than the CP0018 model fitted as standard to the Aeroad CFR and Aeroad CF SLX models, making for a front end that’s 20mm lower.

Although initially available only to pro riders, our guess is that many other riders will want to get their hands on it in order to get the front end lower. We all know that the vast majority of system drag (from bike and rider) comes from the rider, so a position that’s as efficient as possible makes a lot of sense, as long as you can hold it without affecting your comfort.

Speaking of comfort, that’s the final feature that I’m going to mention. In short, there’s a decent amount of it on offer here. 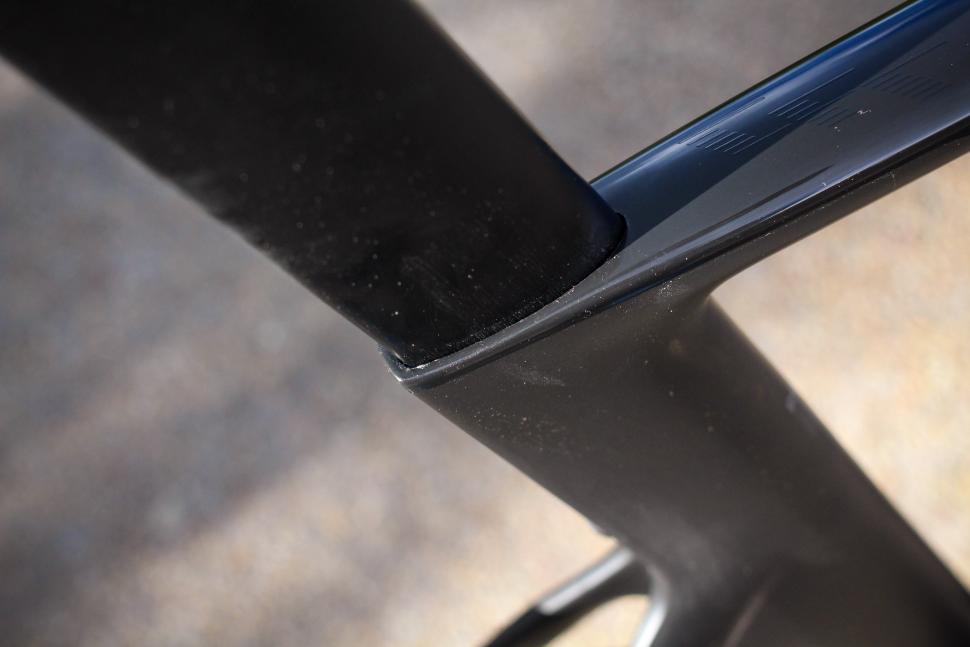 There was a time when aero road bikes might have been fast but the ride quality was pretty shit not particularly high. You had to suck it up if you wanted the speed. Thankfully, things have changed and we’ve come to expect a healthy helping of smooth these days.

Canyon’s new SP0046 seatpost features on all new Aeroads. Although the visible part of the post is deep-section, the lower half – where the clamp is applied – is only half the depth. The post is reinforced in the areas that need it – where it exits the set tube – but the carbon walls of the rear section are very narrow above this point, the front section doing all the heavy lifting. 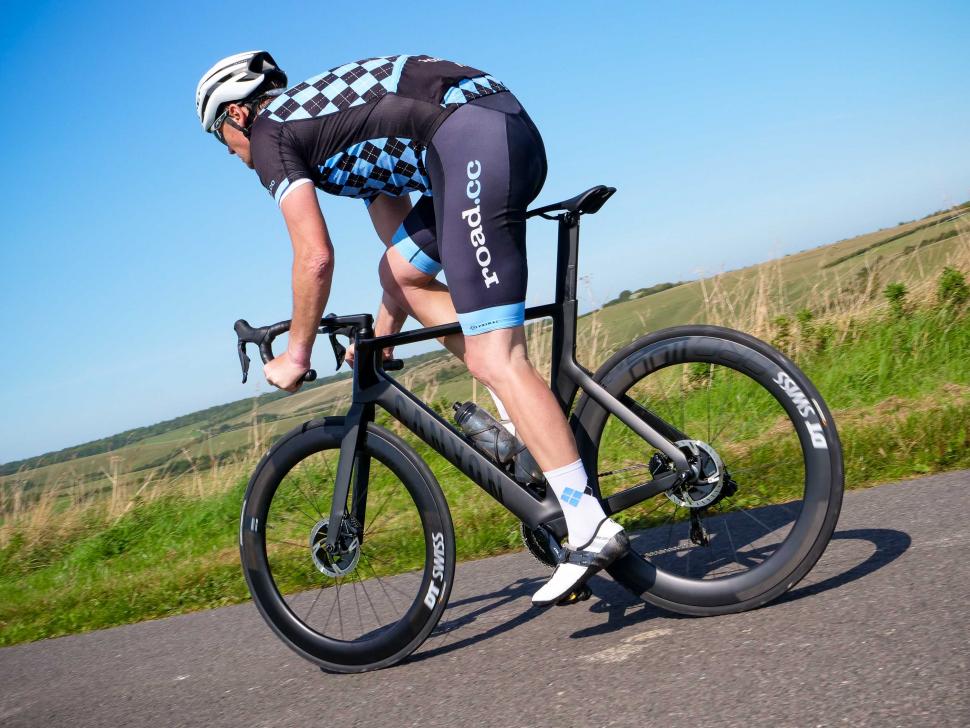 Canyon reckons that as well as improving aerodynamics, this design reduces the transmission of high-frequency vibrations up to you in the saddle. That’s hard to assess, but the fact that a 28mm tyre is specced at the rear across the range certainly helps. The front tyre is 25mm for aero reasons, but the extra width at the back, where it has less impact on drag, is a great addition. Canyon went with a 23mm tyre on the front and 25mm at the rear previously, but times change.

The Canyon Aeroad CFR Di2 is a lovely, lovely bike that puts in a high performance across the board. As well as its aero credentials – which you can take or leave as you see fit – it’s lightweight and sharp-handling, and I found it perfectly comfortable. I’ve only ridden it a handful of times, but I reckon that Canyon has produced a real star here.

Get more info on the tech behind the new Canyon Aeroad.