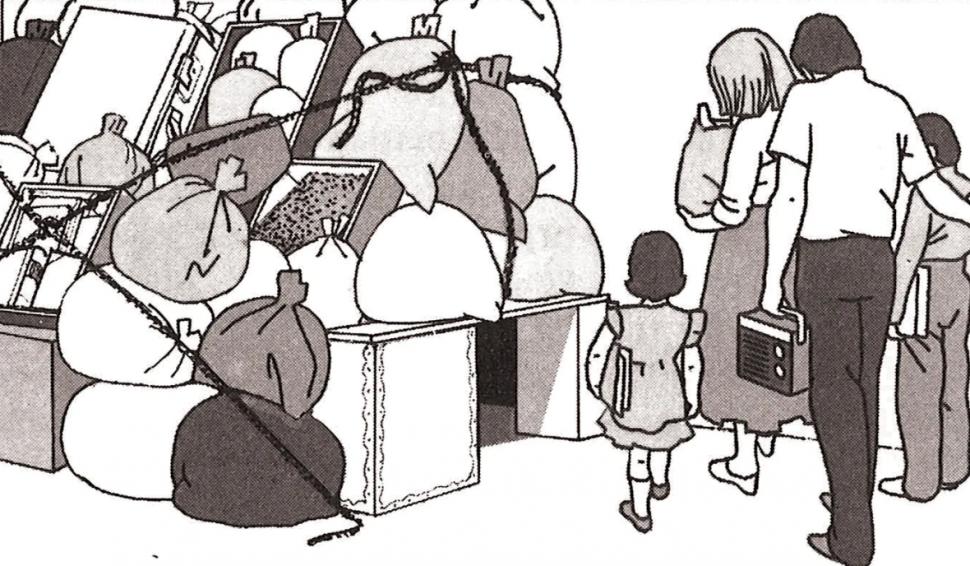 protect and survive 2 - via HM government.PNG
I remember the last time we were all going to die... it's a bit like Groundhog Day of the Dead

My feelings of impeding doom are entirely different to the last time there was an apocalyptic global threat.

Being of a certain age I can vividly remember the Cold War and the constant dark menace of potential mutually assured destruction. There was the perpetual fear that someone would say the wrong thing, rattle the wrong sabre, somebody could just make a stupid mistake or there might be an 8-bit computer glitch the button would be pressed and we’d have four minutes to say some prayers, hug the cat, do whatever took a teenage me about that long to do or hide in the fridge. Looking back it feels over dramatic but I distinctly remember feeling there was the real chance I wasn’t going to wake up in the morning and I wouldn’t even see the blinding flash. I was in the midst of working towards summer exams and some days it didn’t feel worth the bother to do any work at all. Or maybe it was a handy excuse to not do any more revising.

That tummy-aching sharp sicky fear from 'something over there overhead' from over 30 years ago has now been replaced by a worldwide menace that’s a thick, heavy, invisible fog of suspicious worry that swirls around everything everywhere. It is, however, less of a threat if we behave like decent human beings and have more personal control over it; well, more control than putting a CND poster up ever did over a general with an itchy trigger finger. Ironically constructing an underground shelter would be a far more effective solution to surviving the current crisis than any nuclear war, even hiding under a den of old doors and mattresses with a few week’s worth of food and water seems like a valuable endeavour now, indeed being holed up in the corner of a room for months has been the fate of many.

I am still thankfully largely unaffected by the pandemic. My mostly hermity lifestyle has finally paid dividends, but it’s impossible not to feel the crushing impact of the reintroduction of the recent harsh restrictions on the population as a whole. Combined with the other shenanigans crowding the news space, there’s no real temptation to emerge from the safe room and venture into the wider world; instead, there is the overwhelming desire to escape. Every opportunity has been taken to jump on the bike and ride away from everything whenever and to wherever is possible. It’s a pressure release valve I’ve been relying on for years, but there is the nagging urge to extend that escape plan further; and it’s not just with longer bike rides. I love where I live, it is much more than where my house is. It is my Home, it’s where I belong, my connection to this place between the sea and hills is deep set and lifetime long... but I don’t feel I belong here any more. I love England the country; but I’ve always found it convenient to distance myself from any English people en masse, be that at home or abroad, where I’ve felt the need to apologise and be embarrassed about where I'm from far too many times. I’ve always casually looked in estate agents' windows when away, and the casual late night internet browse of places in the mountains somewhere else is feeling a little more serious... and it’s not just for the nicer roads, better weather and fine cycling. I know nowhere is perfect and places on holiday are different to the same places day-on-day, but I’m concentrating on an area that I’ve been to so many times I forget, has always felt like a second home and has an interesting heritage of being somewhere people go to quietly disappear in the folds.

Aside from the daydreaming, there is now just the basic 'getting through winter'. Even without all of everything else, this is always a tough time of year to negotiate; although I always hold back a sizeable chunk of reserve for February. The temptation to think things will brighten up after the triple whammy of hope that is Christmas, New Year and the turnaround after the shortest day is always strong; but the initial months of the new year can punch hard and low, so I never relax or get too optimistic till at least March, which itself can play a few unpleasant cards.

The usual winter coping mechanisms are in place; sneak out in the weather windows wherever possible, and face into the sun at every opportunity. While others are happy to get their riding fix indoors - understandably forgoing the cold and wet drudgery and endless tedious washing and cleaning involved with riding at this time of year, I have the need to 'Go Outside'. Cycling isn’t about hours in the saddle and heart rate and stats for me, and I don’t need to look at a screen for any longer than I need to. Feeling the wind on my face is a vitally important piece of the reason I ride a bike. If that wind stings a bit it’s all the better; I rely on all that is tactile and visceral to keep me alive and happy, even if it’s miserable for a bit. But it’s harder than usual now ,because there isn’t even the lure of treats in the future to look forward to and drag us through. While tentative plans have been made, they’re only written down in pencil and not fat permanent pen. Whether they’re going to happen is vague at best, but I’m good at clinging to possibilities. My heart seems to thrive on longing.

Just last week my postponed big ride goal of 2021, the TransContinental, released an adapted route after this years cancelled race. It’s one that’s been forced to bow considerably to whatever the will of the pandemic might be come the height of next summer. It’s a completely revised and shortened route with added pandemic rules that keeps countries and border crossings to a minimum; a choice that’s going to be welcomed by any British competitors too with their hard-fought-for freedom of movement. Ordinarily I’d be all fired up by this and pawing at maps, taking notes and making lists, but it seems so distant in both time and reality that I might wait until I’m allowed to ride further than my county boundary to get excited. Although, I should try to fit as much riding in as I can within those boundaries just in case.

As I’ve mentioned before, this whole thing has come relatively easy to me. I work from home, I’m happy to ride my bike on my own, and I am gregarious only in very short bursts. I don’t need to go to the pub, and mooching round the shops is not something I confuse with something to do. The festive season has been far less of a bother than normal, with no cramped public space anxiety or enforced fun issues, but I did for a brief moment miss the cosy drinking of three pints with a few friends, and the fuzzy, contented pedal home. And a beer with crisps, I haven’t had crisps in ages (I should get some crisps). I've also missed the motivation and stupidity of doing a cyclo-cross season, but I haven’t missed the cost of it all: the entrance fees, the travel spend, the bits of tea and snacks you buy on the day, and the gradual replacement of parts. This all adds up over the weeks, and the casual tearing up of cash that dragging a bike through mud entails has been pleasing by its absence. In fact, the general draw on finances of being sociable on a bike ride has also been noted: the lack of meet-up coffees, halfway cake, and maybe a post-ride drink or two that we can’t do now have all had a beneficial effect on my bank balance, so that’s more money to spend on, ummm, when we’re allowed out again.

While I may have a tinge of sorrow over missing the slide and parry of racing, there have been a few Sundays when I’ve been glad to been able to stay inside, and isolating isn’t much of a problem. And while we’re clinging to the positives, I’ve not had the usual annoying cold that traditionally snuffles me a bit sideways and cancels riding, plus more than one race weekend. Maybe face masks and more hand washing will become the habitual future for the winter months, and I was always right about interacting with people this time of year being a bad idea. Swings and roundabouts!

I go to sleep now knowing that at least I’ll wake up in the morning; but that the day is going to be much the same as the last, with nowhere to go, which is a death of sorts...