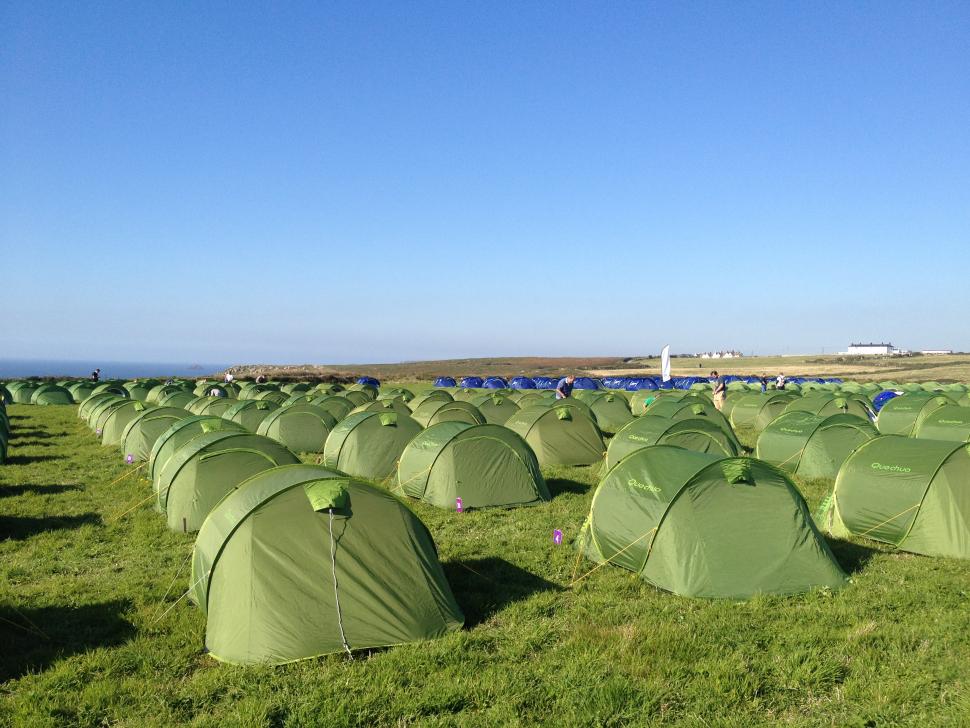 Lands End Camp
So I had hoped to give you a blow by blow, day by day account of the Deloitte RAB Lands End to John O’ Groats cycle ride but due to some, shall we say, ‘velocity issues’ – more about those later – that proved to be rather difficult! However, you will all

So I had hoped to give you a blow by blow, day by day account of the Deloitte RAB Lands End to John O’ Groats cycle ride but due to some, shall we say, ‘velocity issues’ – more about those later – that proved to be rather difficult!  However, you will all no doubt be relieved to hear that having (almost) recovered from my experience, it is time to finally share it all with you!

I think the train journey down to Penzance was the most stressful part!  The train was filled with excited and/or nervous RABers all with tell tale rider numbers attached to their bags.  Having been rather hectic over the last couple of weeks getting my two sons back to school just the day before and then preparing my own (seemingly endless) kit, it was the first time I had had time to sit down and start thinking about what the hell I might be letting myself in for....I literally had no idea of what I was about to undertake.  As a novice and a single, working mother (*sigh*) the most I had ever ridden was 180 miles over 2 days.  That was fine, but 9 days, day after day, camping after camping, exhaustion after exhaustion, how on earth would I ride 974 miles, the length of Britain?  I can tell you one thing, I will never look at a map of Britain in the same light again.

The weather at Lands End was perfect and the view from the immaculately laid out camp, beautiful.  Everything was there, the tireless Halfords crew to help you put your bike back together again after its UPS trip south, (definitely handy when you are as clueless about how your bike is put together as I am) the endlessly sparky and smiley organising team of Threshold to direct you, colour code you, put your rider number around your wrist and also your tent no – a daily occurrence as apparently it is well known that tired riders often forget the location of their tent...other reasons are also given...  A sleeping mat was issued, plastic drinking bottles given, a timing chip attached to your helmet and then it was time for the obligatory photo at the Lands End sign.  Some of the more organised riders got on their bikes and put their kit on for a proper photo; top tip, do that, I wish I had...

Next up the first of many hearty and surprisingly delicious suppers was followed by the all important briefing.  Mack, one of the charismatic founders of Threshold and also one of the mad geniuses behind this events conception (the other being his business partner James Cracknell, say no more...) welcomed us warmly.  This is the first year (out of 3) Mack will actually be riding the entire route with us and I think he was beginning to wonder if he and James had had just one too many Guinness’s the night they came up with this particular gem....   Tonight though, to lift our spirits and get us in the mood, Tim Reddish the President of the British Paralympics Association was live-linked up to us from the Olympic Stadium to give us a wonderful pep talk and say how much it means to the Paralympians (who were in the process of kicking some Paralympic butt right there and then) that the Deloitte RAB’s official charity is the BPA and how grateful they are for our support.  Lastly and just as importantly, Route Director Andy Cook, cycling coach extrordinaire talked us through the next day’s 106 mile ride to Okehampton: it was going to be a tough start or a little ‘grippy’ as Andy likes to describe it.  The message seems to be to pace yourself, let’s face it Cornwall and Devon aren’t exactly known for their flat open planes....gulp.