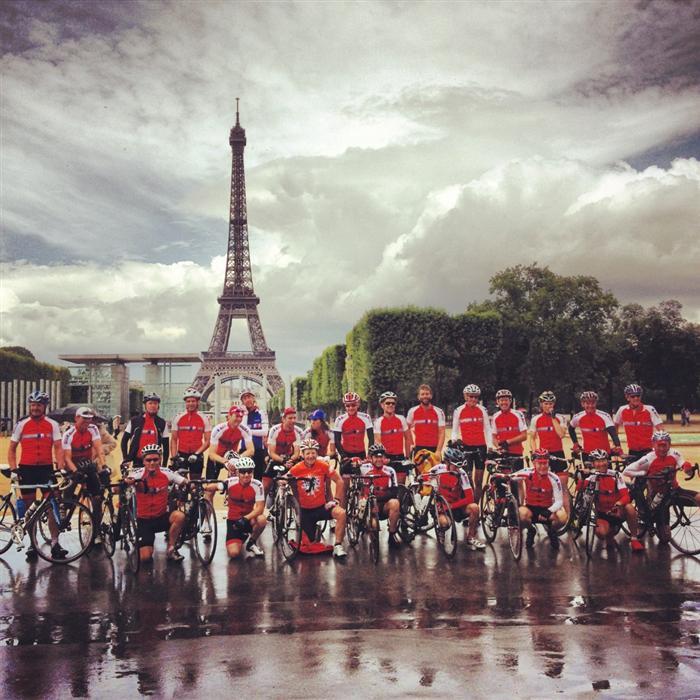 Paris and a glorious adventure ends in style

The Coldplay anthem pounded out from the 'Force lead car at the penultimate feedstop of the event 17km from Versailles. Sarah, ( the event 'Wonderwoman' who manages staff, hotels, food, coaches, shelter from storms,shopping, & everything else that cyclists need but dont have to think about once off their bikes) , strolled randomly through the cyclists, arms swaying, duetting with Chris Martin. As I drove back to Liege this song echoed in my head: yes it had been hard, but YES it was a bigger shame to part; of course it had been hard and no-one could really have known how hard it was going to be to get up day after day, without enough sleep, and do it all again. And again. But as bodies took even more pounding, self-confidence and friendships grew to counter the pressure that the numbing fatigue caused.

Stage 19 consists of a flat 51km TT that kept to pleasant quiet roads all the way into Chartres. But after 5 hours in a coach and another stuff-your-face moment with a ham&cheese baguette on arrival in Bonneval, heading out directly into a full-on headwind is bloody hard work!!

Those who wanted to 'go for it', went, fighting to find some sense of speed from somewhere. The headwind made that a painful process, especially until lungs opened up to give half a chance for the necessary oxygen to get into the blood. Others suffered for other reasons: celebrations had begun for some earlier than for others. Cycling hard into a headwind is one way of getting rid of a hangover...and of what was left in the stomach.

I flitted around 'my flock' & was in awe at the pace set by most. Fortunately, after about 10km, the course changed direction, heading directly towards Chartres in a N-E line, and our vicious headwind for once became a very friendly tailwind pretty much for the whole way home. The fastest time was set by our 'Flying Doctor' at 1.18 hrs, which, for 51km & a red light or two at the end, is OK in my book (he had fitted tri-bars though, so had a MASSIVE advantage over the rest of us!) It was so gratifying to see some of the riders who had suffered so badly in the first week with various injuries now riding so well, smiles all over their faces. By 3pm all the riders, (which included two early- teenagers, who successfully rode the last two stages), were in and for once everyone had time to relax and enjoy the town of Chartres and our town-centre hotel.

To avoid yet another transfer, Sarah and I had designed a 110km course from Chartres instead of from Rambouillet, so at 8am, with two riders still trying to sleep off ANOTHER hard nights' drinking (they easily caught the pack at the first feedstop, despite v****ting stops, we all set off to Paris. Roads were empty (Sunday morning & the day after Bastille Day) as we rolled along roads across wheat fields, still enjoying that tailwind. The peloton buzzed with up-beat chat. The Champs-Elysées felt undeniably close. The route gave us an enjoyable Sunday morning ride, complete with a couple of "Bumples" (ask a Lifer...!), smooth new tarmac, dense woodland, and a great feedstop right in front of the Palais de Versailles. After a steep climb up over the final ridge, rewarded by our first sighting of the Eiffel Tower, we sailed down into the Parisian jungle and hopped our way, from one red light to the next, towards the most famous piece of scaffolding in the world! Another photo-shot-stop, complete with cheering 'WAGS' and family, we took off again to complete a couple of laps of the final circuit. The incline on the Champs Elysées, as one approaches the Arc de Triomphe, surprised more than one as did the cobbled road surface. Despite having to battle with traffic, to ride up this iconic boulevard is still a thrill. I took the Lifers round the Arc (if you hug the centre of it, you are reasonably safe...!) for a couple of extra turns, or four, before we continued on to our close-by hotel. Hugs, tears, smiles, and more hugs. Words were superfluous. How could any of us express what we felt?! A very memorable dinner party followed on a Bateau-Mouche on the Seine, after which we piled into a pub until closing time in the early hours.

As some of us met at breakfast, for once relaxed, with no cases to hastily pack and carry out to the vans, the inevitable moment had come to face our Real Lives again. "Nobody said it was easy, ah it's such a shame for us to part." All good things have to finish some time. We had been reminded to "Live in the moment" by Pittsi half way through the Tour. That has to be Rule Number One. To finish the Tour was our common goal. But of course it was the Journey itself that was the real thrill. Undefinable fleeting moments of "bonheur" that disappear as soon as you recognise them. Moments when you just feel SO GOOD on your bike. When cycling makes perfect sense. When your whole life makes perfect sense. When your reason for having signed up for this thing makes perfect sense! Even those who joined us for just a stage or two could feel the "something special" that was going on. Our Bubble kept us safe and together for three weeks. It burst in Paris, but by then we had all absorbed so much Bubble-Medecine that we could go into our Real Lives with much of it still intact, strong in our hearts and so healthily fit in our bodies.

" No-one ever said it would be so hard.... i'm going back to the start." I did warn Lifers at times, but I knew they could take it! Driving back to the start I was already thinking of next year, smiling to myself in anticipation. Vive le Tour!! But above all, thank you to the Wates Foundation. In memory of William Wates. Through the extraordinary warmth that the Wates family feed out to those around them, I feel that I know Will too, and know that he must be smiling too, thinking about next year!

First started in 2010, Tour de Force is a unique event for those people that have ever wanted to ride the entire route of the Tour de France (without needing a pro contract!).

Riding the 3497km route one week ahead of the race, the riders will roll up the Champs Elysees on 15 July. Lead cyclist Phil Deeker (who also organises the Rapha Cent Cols Challenge), is sending us daily blogs from each stage, which will service as a interesting preview of the stages before the pros ride them a week later.

1
Five cool things coming soon from Ribble, PNW, Wahoo, Rapha and dhb
2
Tory MP helps force removal of pop-up cycle lane in Reigate after just three days
3
Near Miss of the Day 436: "Jerk in a Jaguar" overtakes cyclist into oncoming traffic
4
How are the UK’s pop-up bike lanes being received?
5
Near Miss of the Day 435: Close pass followed by right hook
6
Near Miss of the Day 433: Police tell cyclist “We all have to share the road” after very close pass from lorry driver
7
Special-edition 25 year anniversary Shimano SPD sandals launched. Still comfort over style, then.
8
Apple Watch with cycling power estimation is a step closer to reality