Riding with the Lion King: the Cipollini Gran Fondo

Stu Kerton braves the hail for the chance to ride with a legend. And try out the gourmet feed stops

Chances of getting over the Mendips without seeing any rain? Slim very slim. But the hail storm that practically blinded me just 1 mile from rolling over the finish line of the Mario Cipollini Gran Fondo I wasn’t expecting.

Roll back to the previous afternoon and talk in the bar of the Redwood Country Club was how we should get round in the 115km route in the dry. “Showers are expected from around 3pm” it was decided after much deliberation over the various weather apps. Perfect, shorts and best bike it is then.

The relaxed atmosphere in the hotel was exactly how the Cipo sportive was intended to be. While all sportives are supposed to be non-competitive this one was supposed to be a more leisurely event with talk of extravagant food stops and a route devoid of your usual 25% walls to climb.

Registration itself was swift thanks to the event crew, a glass of sparkling wine from the waiter on the way in, collect your goody bag and hand your bike over to be placed in secure storage for the night. 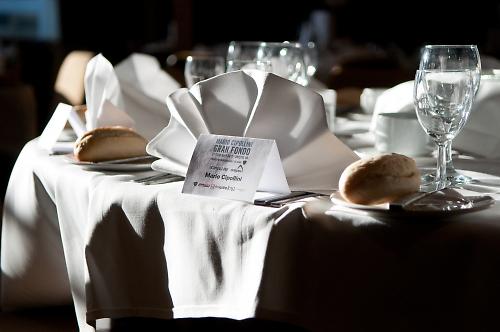 After a chill in the bar for an hour it was time to get the glad rags on for dinner. Mario was already in the dining room posing for photos and signing autographs for the 130 or so that were there for the meal. After a quick drool over the Cipollini bikes on display it was time to eat.

I’ve been a fan of the Lion King’s since I first got into road cycling back in 2000 so the Q&A session was going to be the highlight of my evening. A Procycling staffer did the honours of quizzing Mario on his racing career, what he thinks of the current crop of riders plus obviously his foray into the bike manufacturing business. It was a joy to listen to with Cipo being relaxed and down to earth while interacting with the audience. He’s certainly got a real passion for cycling and his bikes, seeing him discuss his own brand with such excitement show it certainly isn’t an ex pro just sticking his name on a downtube. “Artisan” is how he described it. 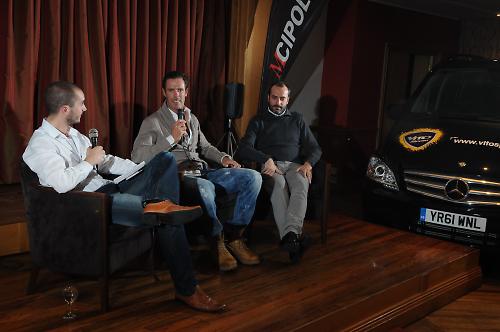 Matt Stephens, ex Linda McCartney and Sigma Sport rider, closed the evening off with some anecdotes from his racing career including riding the Giro. It was the perfect end to the evening leaving just one decision – bed or beer? 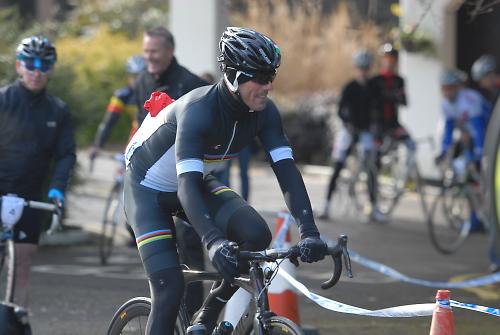 The overnight rain had passed, the sun was shining and the car park was full of riders fiddling with timing chips and the like. There was a real mix of bikes and cyclists and certainly not the MAMIL fest a lot of people were expecting. Mario looking super lean as he arrived kitted out in his rainbow striped kit (he revealed the night before he’s lost 14kg and is back roughly to his race weight) and after a quick rider briefing we were rolling.

A brief stretch of main road and we’re off into the lanes heading towards Portishead and the coast along the Severn Estuary towards Clevedon. It was lumpy and blustery but thanks to the small field of 150 riders passing wasn’t a problem enabling you to crack on at your own pace. The first decent climb of the day sees me tucked in behind the camera van (yep, Go-Pro cameras strapped to broom sticks were catching the action) putting out a pace a touch too high, the expressionless face as good as any pro in the Alps hiding my discomfort. A little ease of the pedals as the camera disappears round the corner and I’m ready to press on down onto the moors and get the pace up. The previous two weeks have seen me barely touch the bike thanks to tonsillitis so an average speed of 18.6mph as I pull into the first feed is a bonus.

The food on the bus come diner is like a banquet with homemade quiche, cakes, Welsh rarebit and fresh coffee all to hand. I have a quick coffee and an energy bar then hit the road again with the hills of the Mendips within touching distance. The feed station has spread the riders out so I’ve got my head down pushing on through the lanes solo. The sound of deep section wheels behind brings the first glimpse of Mario, we exchange brief pleasantries before he’s off into the distance, well, he has got to leave at 3pm to catch his flight. 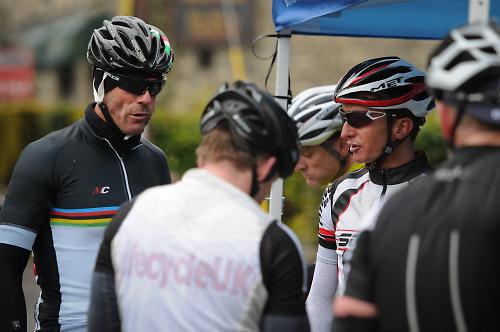 Burrington Combe is a drag, the sun has disappeared and it’s getting colder. I feel sorry for the bloke who tries to get on my wheel as I pass him just after the top cattle grid, he manages to keep up for a whole 10 seconds before dropping back, not a condition you want to be in after only 30 miles. A turn into the wind makes life hard heading towards the main road into Cheddar, then it rains. I’ve ridden the road before which is a bonus as the twisting descent towards the town centre is slippery.

Thankfully Cheddar itself is quiet and a cross tail wind gives a gentle push up the climb. Apart from the 16% in the middle it’s not a difficult climb, just long. A decent tailwind section is a welcome reprieve, well it is until one right turn, then another sees me heading straight back into it.

After a bit more criss-crossing over the Mendips a quick descent down to the second feed stop of the day. A cafe full of cyclists is always a welcome sight and with home cooked food being brought to your table the atmosphere is buzzing with the stories of who stayed on Mario’s wheel the longest.

I leave and the sun's shining again, well for 5 minutes before I ride into the heaviest shower so far, thankfully it's short lived and for the last time today I see the sun as the route takes us across the dam of Chew Valley Lake.

Some more climbing takes us to the A38, I say us as I seem to have picked up a wheel sucker who continues to shadow me through to the outskirts of Bristol. The kilometres are counting down and heading towards and through Long Ashton. The tailwinds back and all those years of time trial training helps me drop the freeloader as the Bryton’s readout is showing 28-30mph on the flat before hitting the climb up through Ashton Court.

Remember the hail storm I mentioned, well this is where things got miserable. In my head I was going to finish with a bit of a sprint, possibly a small celebration – a point to my jersey to keep the sponsors happy, that sort of thing. What I actually looked like was a shivering, grumbling mad man, vouching to never ride a bike again if there was even a single cloud in the sky.

After a quick change into dry clothes, some coffee and cake I was back to normal and able to reflect on a good day out on the bike. A ride time of 4:09 for the 72 miles was a pleasing result considering the weather.

The ride itself was a tried and tested route if you’ve ridden in the Mendips before and suited me down to the ground. Comparing the Cipollini Gran Fondo to a regular sportif doesn’t really do it justice, the feed stations allowed you the option to sit down and take your time enjoying the banter and fine cuisine meaning it was more like a club run or audax in that respect.

The cost, well yeah it may seem expensive but £200 for a weekend of cycling with a world champ, chuck in a three course meal, hotel room, Mario Cipollini jersey, (mind you mine probably won’t fit as I couldn’t bring myself to tell the lovely lady crew member that I’d probably need an XL, Italian sizing and all that!) free downloads of photos and video plus the level of support and food available on the ride itself, you're getting a lot for your money.