This Could Be The Start Of Something Big

The wall of heat that falters the first step out the plane at Geneva airport is both a good and bad sign. Good in that the sun is shining and riding a bike in the sun is a Good Thing, bad in that in 30+ degree heat is going to be, um, troublesome if it continues over the week, especially as there’s 730km to pedal, with 17,000 metres of climbing. Even lugging the bike the 100 metres from the train station to the hotel brings about the kind of muck sweat that requires a t-shirt change, hmmm. Welcome to the Haute Route.

Today is a day of signing in, receiving ride numbers, special Haute Route jerseys and the bag that everything we need has to fit into for the week, the bag that will follow us round the course and be waiting at each finish so we don’t have to worry about kit logistics. Bikes emerge unscathed from the horrors of baggage handling and are built up, and some stupidly have their pedals and quick-releases in the other bag which causes awkwardness. Then in the evening there’s the rider briefing and pasta party which is more pasta than party as everyone leaves pretty soon after pudding as it’s been a long day already and a silly early start tomorrow and there’s a bunch more getting ready stuff to do….

We wake at 5am and head down in the dark to the start on the banks of Lake Geneva, although not before one of our party discovers an overnight puncture so there’s outside the hotel kerfuffle before we freewheel down the hill to the start line breakfast, warm enough already to not have to bother with arm or leg warmers or gillets or windbreakers. Watching dawn break over the lake would be pretty romantic if there was anyone pretty enough to hold hands with, but instead there’s milling about waiting for the off with bread rolls and coffee and last minute tinkering beside the Mavic truck and a queue to get tyres pumped up. The start time creeps up with fidgety anticipation and we roll out around the lake and into a week of trepidation. The first 23kms of the days 109 are ticked off pretty easily, sucked along in a 300 strong peloton controlled by a pace car to counter any over-exuberance, but that doesn’t mean we’re hanging about, clipping along at 30+ kph in a nervous bunch is a quick way to wake up to the day.

At some point we leave Switzerland and enter France where the controlled section finishes and the stage is now timed, I didn’t see any signs, either for the border or the opening of the serious business but I suspect it may have been when the pace kicked off and the peloton shattered. It was obvious that the Haute Route was going to break into two groups, those that were there to race and those that were just trying to survive to the end and I think the split just happened. Making an effort to see what it’s like at the sharp end of the ride I jump from group to group stuck between the two speeds and to make the final leap I slipstream the Mavic motorbike, there’s a lifetime’s ambition ticked off right there. 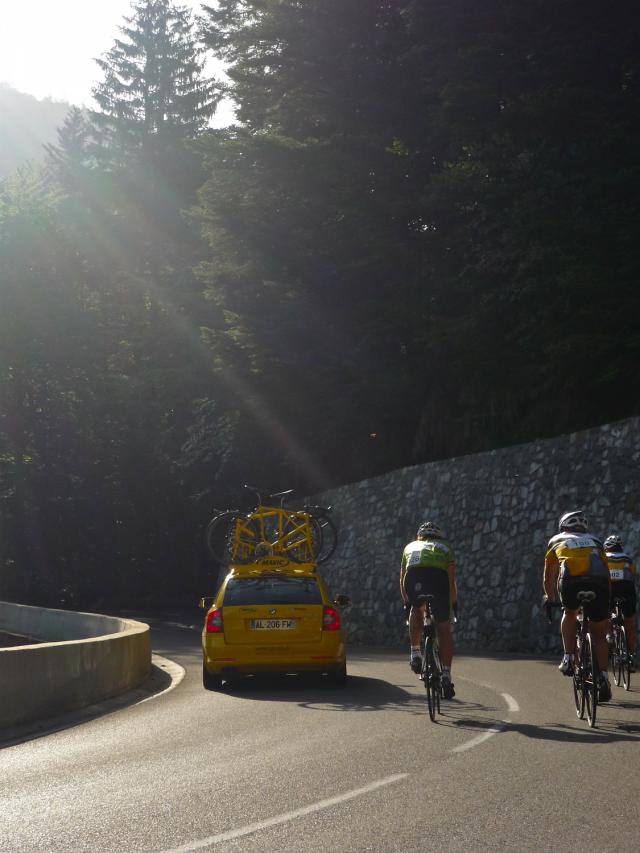 Up front the difference to the survival gruppetto is subtle but impressive, speeds cause a raised eyebrow when catching a glance down at the speedo, and the bunch is a much more confident and flowing beast. After months of solo training rides battling against the wind and failing to make any impression on it it’s great to be drifting along effortless and speedy. We swoosh along the valley floor and the start to the Colombiere comes without any fanfare apart from the chorus of manic gear changing, the group files off the main road, through a village, takes a sharp left and we’re on the climb. The real Haute Route has begun. It takes a kilometre or so for the traffic to thin out and people steadily slip into their climbing pace for the next 16 kms or so, and struggling against the gradient and the heat seems to be a bit of a shock to most people’s systems. With a few K’s to go the road turns right out of the trees and a set of tired legs is treated to a full view of the road winding it’s way up the unforgiving rock towards the summit that’s just visible in the dip in the mountain, and it’s a steady struggle to eventually get there and the frenzy at the feed station. Riders are snatching fruit, energy bars, filling up on water and grabbing cups of Coke before heading down the mountain towards Saint-Jean-de-Sixt and into La Clusaz where everyone turns right to tackle the Col des Aravis, not before being bemused by a giant clown on the back of a lorry. 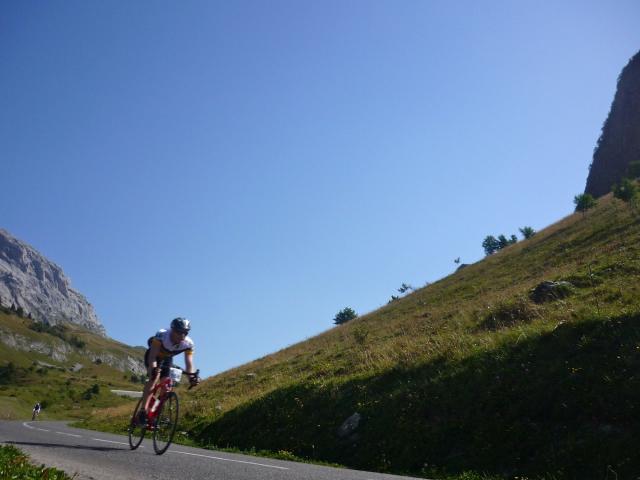 The start of the Aravis is a little scruffy as it fights it’s way up through the town, but thankfully along with direction arrows there have been marshals on every single junction and roundabout along the route controlling and stopping the traffic which does so obligingly so us cyclists can have a stop-start free swoop through the country, and even though the roads we ride aren’t closed the passing traffic is universally courteous to all the riders treating them with lenience and respect, and patient in having to leapfrog through 300 strung-out cyclists, even shouting encouragement as they pass while random spectators by the roadside clap and cheer. This isn’t England. If it were half the riders would be mown down and dead by now. 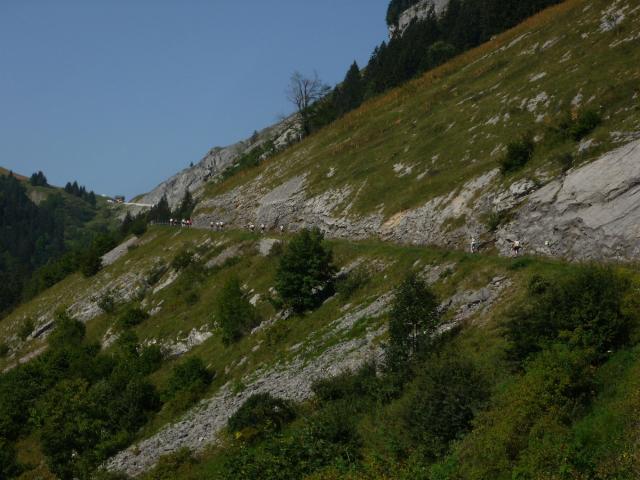 The Aravis is a pretty climb, passing through pleasant meadows at a not too strenuous gradient and only 8km long, but it still catches some people out. I pass a rider not even half-way up rigidly astride his bike, crippled with cramp, and reports from riders following me suggest that he was still in trouble some time later. And it’s only day one, jeepers. There’s another feed stop at the top of the col, which doesn’t seem strictly necessary, as there’s only 20km to go, mostly downhill, but just in case…… The descent to Flumet is fun and twisty, especially as I rode up it last year with friends and it’s a bit of an effort to ride past the bar we sat in to watch the Tour go past and just when you think it’s all over there’s a final little lump to winch over before dragging yourself up the valley to the finish in Megeve.

And Day One is done, riders sit around in the sun, or more accurately, try to find some shade, whilst others have a massage, some queue to get their bikes fixed again by the Mavic guys, some make repeated skirmishes on the refreshment table (a bodged together ham and triangle of cheese sandwich a personal favourite) and stories of the day are traded with new friends. There’s Paul the triathlete whose longest bike ride until today had been 40km, and he was understandably quite cheerful to have survived while the fastest rider completed the stage in 3h 46mins 13secs. Like I said, it’s a sportive of two halves.

One down, some more to go.

1
Near Miss of the Day 435: Close pass followed by right hook
2
Chris Boardman has sold his car and is working part-time at Halfords
3
How are the UK’s pop-up bike lanes being received?
4
Rapha unveils new Pro Team, Explore and Classic Sunglasses with surface enhancement lens technology
5
e-bike TV ad banned for creating “climate of anxiety” (but you can watch it here)
6
Could UK first CYCLOPS junction be "slam dunk" for cycling?
7
“No excuse” – councillor slams motorists who drove on pavement to get round road closure as emergency infrastructure ignored in London and beyond
8
Near Miss of the Day 433: Police tell cyclist “We all have to share the road” after very close pass from lorry driver