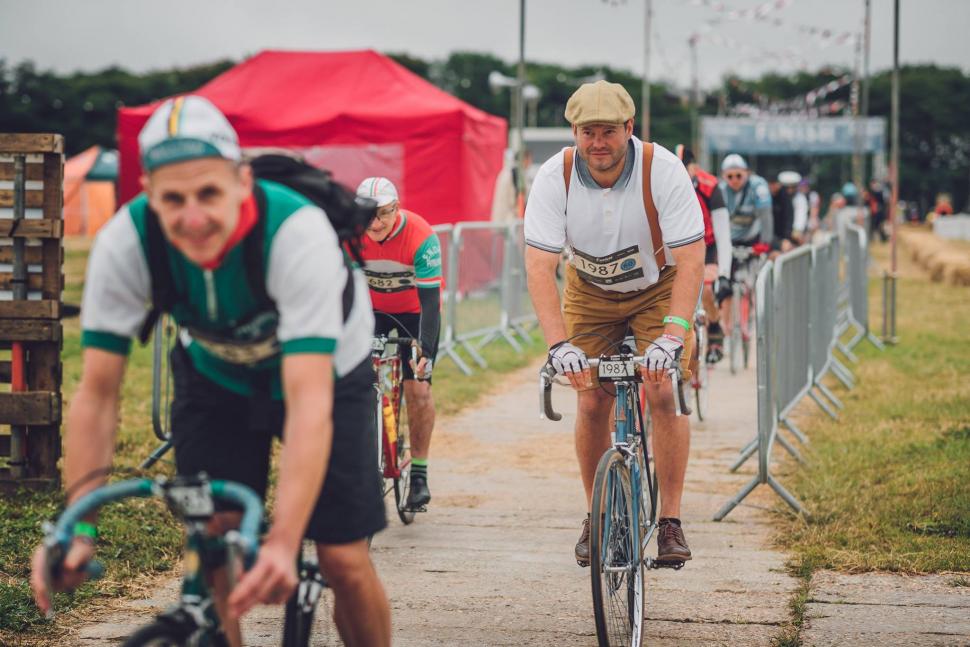 Rickety old steel bikes, beer and cake with thousands of feet of elevation around the peaks of Derbyshire? It’s a far better idea than it sounds, as I found out at this year’s Eroica Britannia…

After attending the launch event for the 2018 Eroica Britannia back in February, I liked the ride and the Eroica vibe so much that I made sure to save the date and stock up on retro kit for the event soon afterwards. Fast forward a few months and I’m toe-clipped into my vintage steel racing bike on the start line surrounded by hundreds of other relics from the past, preparing for a long but epic day in the saddle...

In short Eroica Britannia is a vintage bike festival spawned from the original Eroica event in Tuscany, which itself spawned a professional race, the Strade Bianchi. There are several events worldwide now, and Eroica Britannia takes places around Derbyshire’s Peak District (departing from just outside of Bakewell, off of Bakewell tart fame) with 30 mile, 60 mile and 100 mile route options. Your bike officially has to be pre-1987, which means steel frames, downtube shifters, toe clips and wool are in, while cleats, carbon and lycra are generally frowned upon. We saw everything from penny farthings, to tandems to Raleigh Choppers taking on the course, completely unsuitable but that’s all part of the fun apparently.

Perhaps not this unsuitable, but there were a few right old beaters on the course

Within the criteria I probably had one of the most suitable bikes possible, although with plenty of gravelly sections plus some rocky and muddy climbs, the Dave Quinn 7 speed racer with 23mm tyres I was on (see pic below) still wouldn’t be my machine of choice for tackling such terrain if I’m being totally honest. This was the same bike I rode at the press launch back in January, which I hired out from Andy’s Vintage Bike Shed for the ride after getting on with it pretty well… although I did request some extra tape this time around because the skinny bars were killing my palms, being accustomed to plush oversized modern ones. 7 speed gearing with 52/42 chainrings and an 11/28 cassette gave me a reasonable range but obviously far less at the bottom than a modern compact setup, so I was prepared for some grinding to get up the steeper ascents. 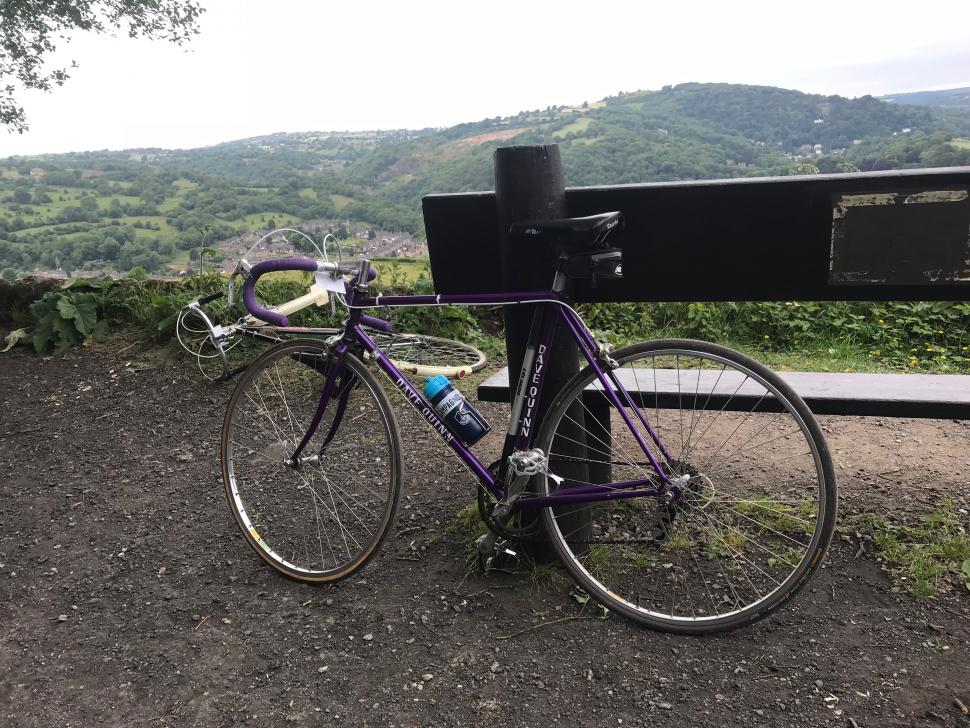 The ride places also give you access to a three day festival on the site (camping optional, kids under 12 go free if you want to bring the family), with musical entertainment, lots of stalls selling vintage bikes, bits and kit plus plenty of food and drink. It’s family-friendly and although the entertainment was perhaps missing a headline act or two, there was plenty to see and do; including a slightly bizarre whisky-tasting seminar with numerous folk in hippy style get-ups in the back of a van, plus lots of local bands on the main stage. 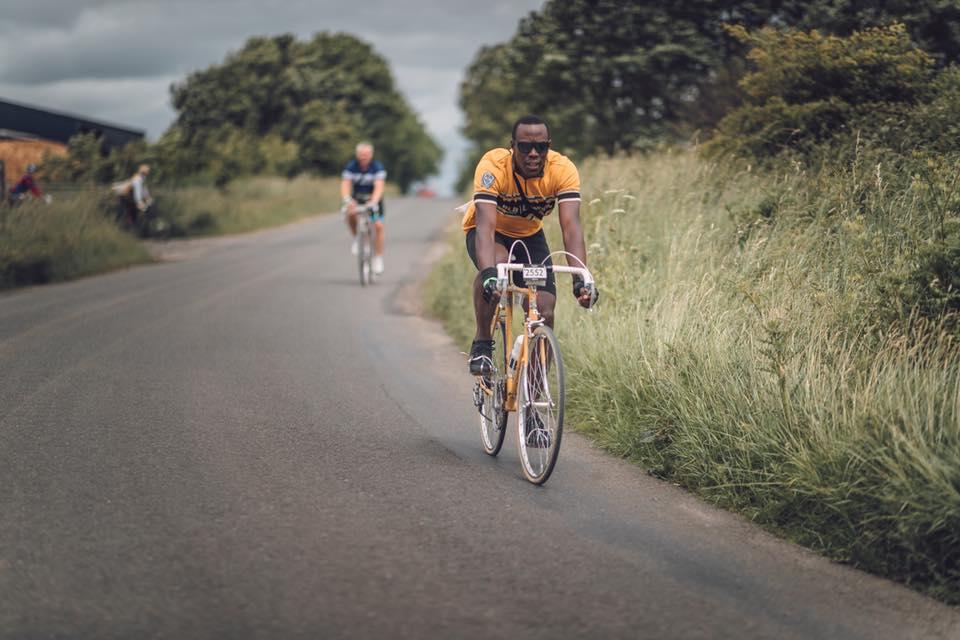 Although we were in two minds which distance to tackle, my two pals and I opted for the 60 mile route with just the 4,560 feet of elevation; the main reason being that the 100 departed at 7:15 on Sunday, and we were already a couple of drinks down the previous evening… so a 9.30am depart seemed a bit more manageable!
The ride begins off-road on some flat gravel around the high peak trail, and the ascents start on the road within the first 10 miles. To me a prerequisite of riding Eroica was making sure I was well physically prepared to tackle the tough ride, and factoring in an unfamiliar bike with downtube shifting it really is no joke... therefore seeing people pushing their bikes on the first hint of a climb made me wonder if some folk had underestimated it or had just accepted they were going to be on foot for the hilly bits. Either way it was going to be a bloody long day out for them, as we passed 100 mile entrants who had started a couple of hours earlier well before the Thornbridge Hall lunch stop 25 miles in. The Thornbridge Hall stop was a highlight, and also provided plenty of photo opportunities with a retro Mavic neutral service car (see Instagram post and bottom of this page) plus a nice stodgy lunch bag with optional Thornbridge pale ale on tap. After soaking up the beer with Bakewell Tart we set off towards Bakewell town, before a pretty rough climb up and over Beeley Moor. This one was long and constant as opposed to the short and sharp stuff I'm accustomed to in the UK, and more reminiscent of a European climb in my mind. Roadside repairs were a common sight... remarkably we got through it puncture-free

After a long old descent we reached the second stop at 47 miles and filled up on homemade brownies, probably too many because immediately after is arguably the toughest part of the course... an off-road climb averaging 11% that finishes up on the top of the High Peak Trail. This is the only time where my gears properly let me down, with the rear shifter changing itself up a gear unexpectedly on one of the steepest parts of the climb. Somehow I just about managed to keep the pedals going with my right hand holding the shifter back and my left foot out of my toe clip and pedalling on the underside, before managing to stick it back in after about a dozen revolutions of scraping the clip along the rocky ground beneath me.

There's one more bit of off-road climbing before rejoining the gravel paths for a relaxing pedal towards the festival site, with more drinks awaiting the finishers. In hindsight I'm glad we did the 60 miler for the kind of day out we wanted (stopping lots and soaking it up with a bit of physical exertion along the way) and would probably have preferred to do the 100 with less pit stops and totally at my own pace. If you do take on the long route and are riding with others of varying ability, be prepared for a big day out... that's just my tuppence worth though. 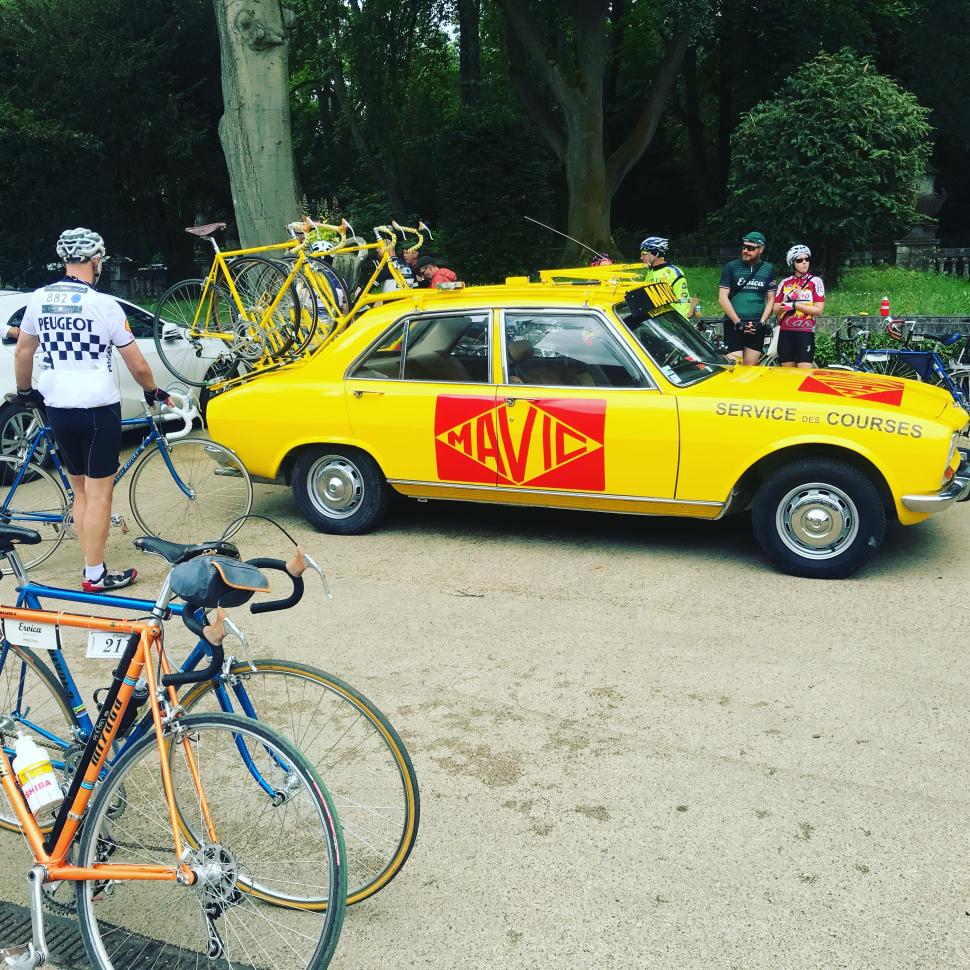 All in all I reckon Eroica Britannia is a must-do event in the UK for any cycling fan, and extends far beyond a niche vintage bike nut gathering. The ride itself is fantastic on its own, and add in all the retro goodness, a festival and excellent tasty freebies for the entry price, you're guaranteed an epic day out providing your vintage bike is somewhat rideable!