A Crack in the Dream 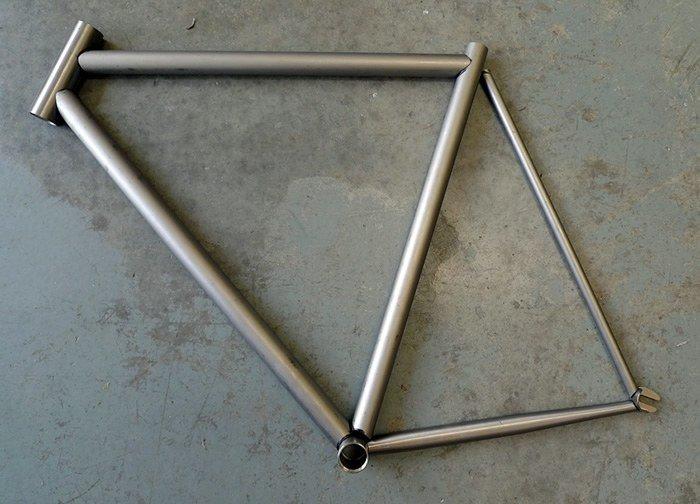 That industrial look
Happily ever after takes a hit

Do you have a dream bike? The one at the end of the n+1 rainbow? I took delivery of mine five years ago on an industrial estate in East Sussex: a bespoke Enigma Esprit, built to my taste with horizontal dropouts to facilitate singlespeeding (prompting Mark Reilly, who's since moved on to Reilly Cycle Works, to call it a "boutique bike"), old-fashioned round tubes where some of the Esprit's are ovalised, and a lack of decals in keeping with the brand name. ("What's that?" "That would be an enigma, of course.")

I can't say no expense was spared. The wheels, as an example, were near the bottom of the Shimano pecking order, it being easier to pencil in future upgrades in the misty future rather than step onto that rapidly rising price escalator. Especially blingy accessories weren't at the top of my agenda. It doesn't take a wallet completely emptied of cash to satisfy me on an aesthetic level. More important, the ride was sublime. I felt set for life. Ti can have that effect on people.

We've rolled happily together ever since. I've never named it: It's just "the Enigma". It eats up the lion's share of my riding time, with the other bikes in my small stable mostly relegated to iffy weather days or demoted to break-in-case-of-emergency status (that would be "the Langster", which is a sadness for a perfectly decent bike). If I have a complaint it's that it likes to throw puzzling clicks and creaks at me every once in a while, which I then have to sort out in a challenging game of Find The Source. But then all my bikes do that.

About a month ago the game went to a whole new level. I was on a midnight ride, enjoying the bliss of desolate tarmac and the always mysterious black cloak thrown over otherwise familiar surroundings, when a turn of the cranks suddenly pulled a disturbing new creak into the proceedings.

The following morning I put it on the stand and was startled to discover cracks near the bottom bracket, which as we all know is a location that attracts more than its fair share of suspicion anyway. I was strangely relieved: never has a creaky conundrum been so speedily solved. 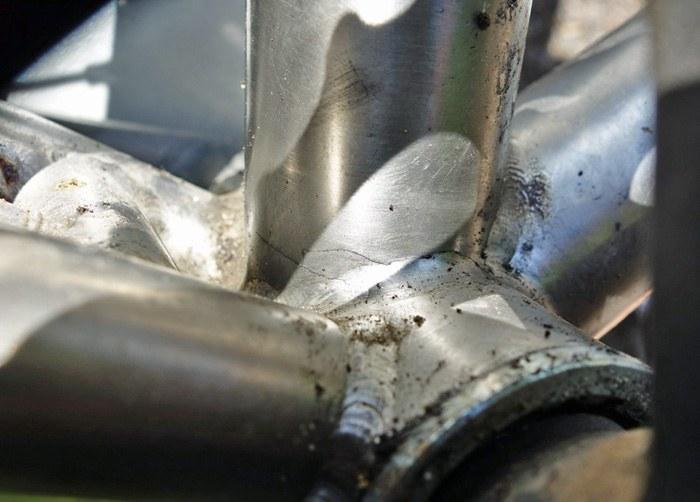 As it happens I had recently gotten the bike back from a visit to Enigma HQ, there submitted for inspection as a last resort after failing to find the cause of yet another mystery noise. They'd made a few minor adjustments and returned it quiet. The only expense – bravo for the nil charge, Enigma – had been my loss of pride at not finding the problem myself. At the time, my three main rides had all come down with similarly earritating [not a typo] ailments, and I'd felt overwhelmed. I'd decided to take it to them so they could reassure me it wasn't the frame itself which was compromised. (Alas, the noise had returned. I'd finally exorcised it by swapping out the seat post and clamp.)

On presenting my now mortally wounded mount, the first question I was asked was "Has it been in an accident?" No. This potentially warranty-threatening query dispensed with, I was assured it would either be repaired or replaced, the latter seeming more likely given the location of the fissure, but it was up to their resident expert. Now that we had history, saying goodbye to that particular frame would be bittersweet, if replacement was in the cards. I mourned the possible loss of my favourite for the months it might take to get a reasonable facsimile back, and returned home to give my lesser bikes more exercise.

When I called the following week to see what decision had been made, I was told it would be repaired. Though I could live with this, and understand that throwing a new frame at the problem can make a big dent in a small business, it did concern me enough to email Enigma supremo Jim Walker in search of reassurance that this was the best course of action. Jim said it is their policy to repair rather than replace bikes older than three years, adding, "To be fair the indications are that your bike has had a hard life and covered many thousands of miles during its life and much can have happened during that time."

It's fair to say this threw me. Although East Sussex has a formidable pothole collection, I'm pretty good at avoiding them. A bumpy offroad stretch on the Dunwich Dynamo is the worst it's had to endure. I don't even like taking it out in the rain, which is surpassing silly, but that's why we have backup bikes.

Thus was the crack in the frame for the first time matched by a crack, however slight, in my trust of their expertise. What, I wanted to know, were the signs my bike has had a "hard life" when I know for a fact that it hasn't? Surely there was an impurity in the logic, if not the weld. With 20k miles on the odometer and indefatigable fatigue endurance, or so all the metallurgists say, I'd have hoped it was just warming up.

I stewed about this until I got it back repaired a week later and asked Jim. Either he amended his earlier observation or I amended my judgement of it, I can't rightly say, but we parted shaking hands, which is how you want these things to end. A weld in the crack, if you will.

It'll take a few miles to put this behind us. There's no logical reason the ride can't be exactly as it was before. I imagine resale value might take a hit, as if: I'd like to keep working on happily ever after. 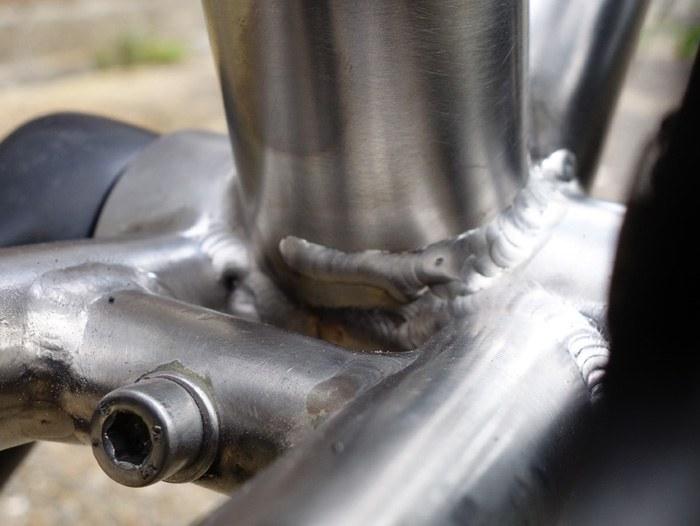 When welding, remember the 3 C's: Clean, Clean, and Clean

This is the first time I've had to use a warranty with a bike. The best you can hope for is that it goes the distance. Tony Farrelly, editor of road.cc, says he once spoke to "the head honcho of a high end, high tech bike brand whose carbon frames have a lifetime warranty – which is actually a distance warranty – calculated on the distance a pro would ride it in 3 years (I think) a very, very, long way it turns out – on the basis that that would easily cover the likely lifetime use of most purchasers."

What do some of the other ti pedlars promise?

Van Nicholas:
"Will replace (not repair) any Titanium frame that fails due to manufacturer defects in materials or workmanship for the lifetime of the frame. Every bicycle has a limited life, the so-called useable life-cycle. The duration of the useable life-cycle of bicycles depends on the type of frame, the way in which and the circumstances under which the bicycle is ridden and the care/maintenance the bicycle receives. The lifetime guarantee period is established on the basis of the duration of the useable life cycle of the bicycle. Van Nicholas sets the lifetime of their frames at an average of 25 years."

Sabbath:
"The warranty is for the lifetime of the original owner. Any frame failure would be replaced with a new frame. We also have crash replacement policy where we offer a half price replacement for any frame damaged in an accident."

Burls:
"If any of my frames or forks should fail within 4 years of purchase due to faulty materials or workmanship, I will repair or replace the frame or fork depending on which option I feel is fit."

Lifetime warranty means life of the company, so may we all live long and prosper.