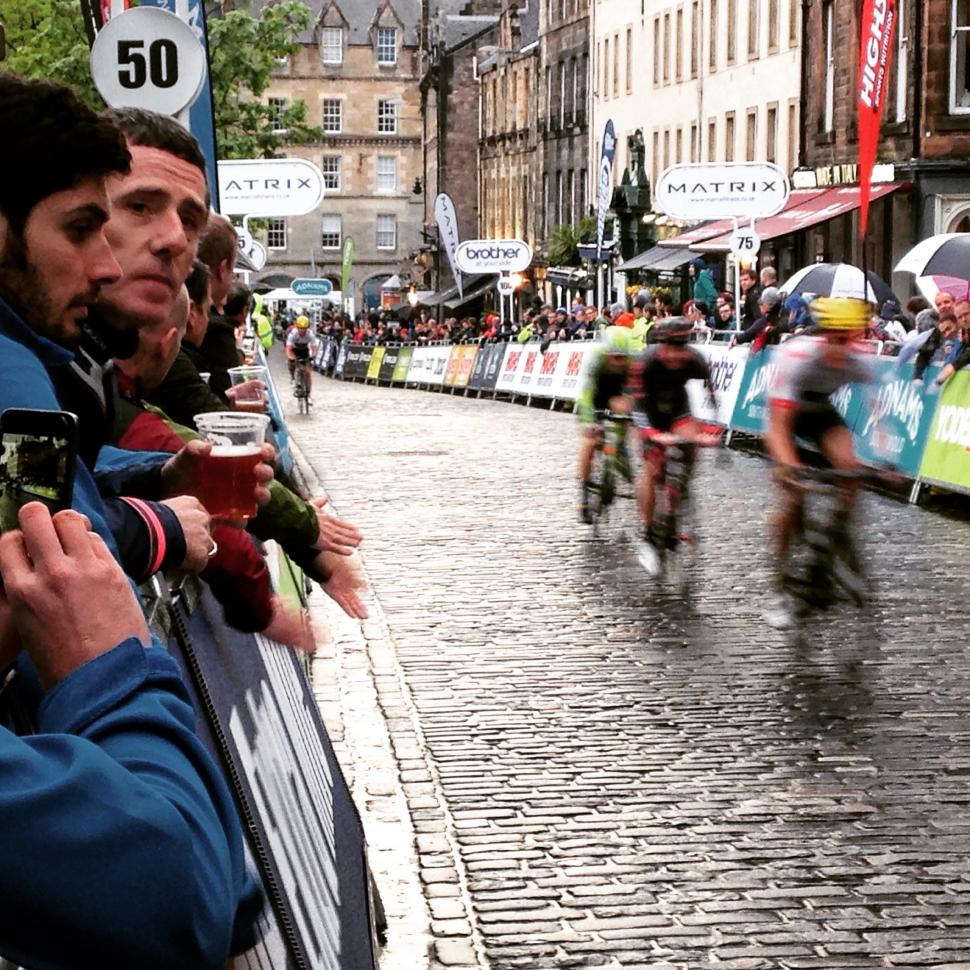 TSE-Sprint.jpg
Sam has a go riding the Edinburgh Tour Series corporate event and has a chat with Brother MD, Phil Jones

The kind folks at Events Scotland were kind enough to draft me in as a member of their team for the corporate race at the Edinburgh round of the Tour Series. When I say "kind enough", I mean they had no reservations about chucking me into an all-out standing start lung-bursting lap around the 1.6km Tour Series course. Being excited about the event, I put out a couple of tweets and had my eyes on who else would be riding the event, which took place before the pro's set off for their race - you've got to know your competitors, right? One of my Twitter connections, Phil Jones @roadphil the MD of Brother UK was going to be riding the corporate race as part of Brother's sponsorship of the event. A bit of chat between us and we'd organised to keep an eye out for each other.

Arriving for the event, the roads were wet and the cobbles looked lethal - it didn't look like this one lap dash would be that enjoyable. I spotted Phil looking the part in his custom Brother Cycling kit and went across for a chat. Phil's an approachable guy, that came across straight away, and you could immediately see that he was buzzing about the event. He'd been up in Scotland since the start of the week for the Motherwell round of the series. Chumming Phil round to his car to get his rather nice Beacon bike, I asked how he had got involved with the Tour Series to the point where he was spending the best part of a week north of the border. Phil's a keen cyclist, that's pretty clear from his Twitter feed, but loads of us are so it's intriguing that he's taken it further and become involved professionally as well as spending his personal time in the saddle. Brother's involvement isn't a new thing, they have provided neutral support to the UK cycling scene for the last 4 years and have a continued commitment to the sport. What is new is a step up as a major sponsor to the national Tour Series, it's a big deal with weekly exposure during ITV's hour-long highlights programmes.

The conversation with Phil is now rapid and enthusiastic, we're talking about the benefits of social media for promotion but also how it can be used for networking relationships both business and personal. Phil tells me he runs 3 Twitter accounts himself, his cycling based one, a professional account and a personal account. He's clearly invested in social media and it shows to his followers and the daily interactions he has; for the MD of a big company, he's not aloof and you can quickly chat to him as if you're having a chin wag with one of your mates down the pub. I mention this to him and his response is that he is a normal bloke who loves riding his bike, what he does in his day job has no bearing on the passion he has for cycling; he's just as nuts about it as the rest of us. He's open about his approach towards marketing and the strategy behind Brother's involvement in the sport, Phil knows cycling, he loves cycling, so it makes sense to be part of (you guessed it) cycling.

Phil explains that the Tour Series wasn't on Brother's radar until a chance coffee with one of Sweetspot's event organisers who asked if Phil would be interested. The response was that he might be, but it needed to be a package that involved Phil and Brother in some way, not a "pay your money and run" deal, he wanted a brand relationship with the series and to be involved himself. Thus the Brother Corporate Grand Prix was born, an event supported by local business that pitches teams of 5 against each other in a relay race around the crit circuit.

So here he is, cooperate kit on, chatting to the likes of Sweetspot organiser Mick Bennett or the likes of me with equal enthusiasm, ready to put himself to the test around the course. I later see Phil on the highlights programme explaining Brother's involvement in the event. (I also saw myself on the highlights... they say the camera adds 10lb but I reckon it went metric and added it  10kg for me...) He's joined by Brother employees who have come to join him as part of their corporate team, they're doing their warm up with Pedal Heaven, it seems like they've settled in to the Tour Series lifestyle pretty well. The teams are joined by one of the pro riders, who completes the final lap. Our Events Scotland team is paired with Spanish pro Albert Torres, who's whippet thin and all smiles on his lovely Raleigh sporting deep section Cole carbon wheels. He later goes on to finish 5th in the main event, an impressive result in what looked a bloody tough race from where I was stood watching in awe as riders fought for a rainy hour over wet cobbles. The corporate event was fun, which was really the point; one chap did it on a Moulton and there were a couple of hybrids too! I felt as though my lungs were going to burst from my chest from the get go, the cobbled climb up Victoria Street looked much easier on telly, and was certainly less arduous when I used to wander up it from the grass market as a student in Edinburgh. A valiant attempt from the Events Scotland team was never going to be enough to beat home favourites Edinburgh Road Club, who had local ex-pro Jimmy McCallum on their team. The proceeds from the event went to Ride for Charlene https://www.facebook.com/RideForCharlene/, a charity set up by Jimmy in memory of his sister, who died last year at the age of 36. This summer, Jimmy's attempting to break Mark Beaumont's 500 mile NC500 ride around the north coast of Scotland to raise money and awareness for the charity. You can donate here https://www.justgiving.com/fundraising/JIMMYMAC-NC500-IN-A-DAY And then there was my old friend Kim Harding promotoing the Edinburgh Festival of Cycling http://edfoc.org.uk/ Yet another demonstration how cycling can raise awareness, it doesn't need to be a brand, the buzz that a cycle event generates can be tapped into for many purposes, there's huge potential out there.