E3 Harelbeke: Sagan Vs Kwiatkowski from inside a neutral service car I’m sitting in the familiar blue Skoda of Shimano’s Neutral Service car with all eyes fixed on the mirrors as we sit parked at the side of the road. Waiting. I’m in car two, we follow the breaks as they happen. If it’s a day without breaks then it can be quiet (super quiet), but right now race radio is going fairly nuts as the 2nd break of the day has splintered behind us. At the 70km to go mark the radio had barked out the news of that break coming together, it contained the likes of Tony Martin, Fabian Cancellara, Michal Kwiatkowski, and the world champion Peter Sagan, it was, as they say, kind of a big deal!

But we are at the 40km to go mark now, and it has splintered further, on the Karnemelkbeekstraat where Sagan and Kwiatkowski have pulled away from the bunch.

Will this be were the winner will be coming from?

To my left is Rudie, as the driver his role is to be in the right place at the right time, ever at the service of the riders. He has to balance the demands of the race commissaires and the police outriders, there are conflicts of interest at play here, but he is ever focused on the needs of the riders. The rider to him, is everything! Behind me is Ivan, a white haired veteran and master wrench, his hands are ever-ready with the tool box, or one of the many spare Shimano C50 wheels. 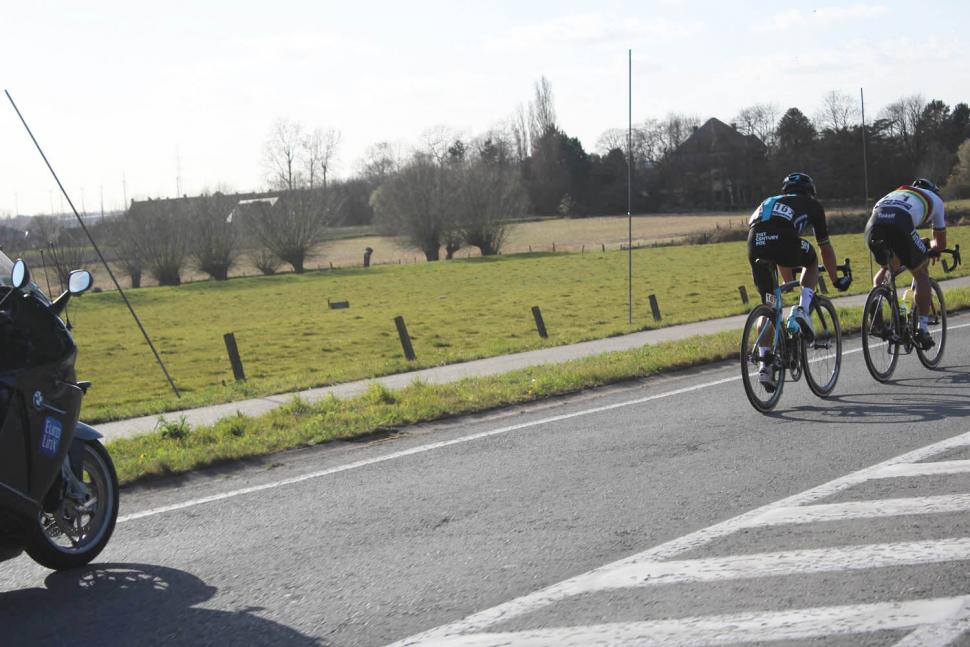 The radio has informed us that the duelling pair of Sagan and Kwiatkowski have opened up a lead of 30 seconds, that’s the magic number for the neutral service car, at 30 seconds the gap is big enough to warrant our presence and we can slot in behind the leading two.

We are waiting for them to arrive. As the helicopter appears overhead, and the first of the motos appears, the tension becomes palpable within the car. And there they are, the current and former world champions pulling through and off in their effort to stay away from the pack. 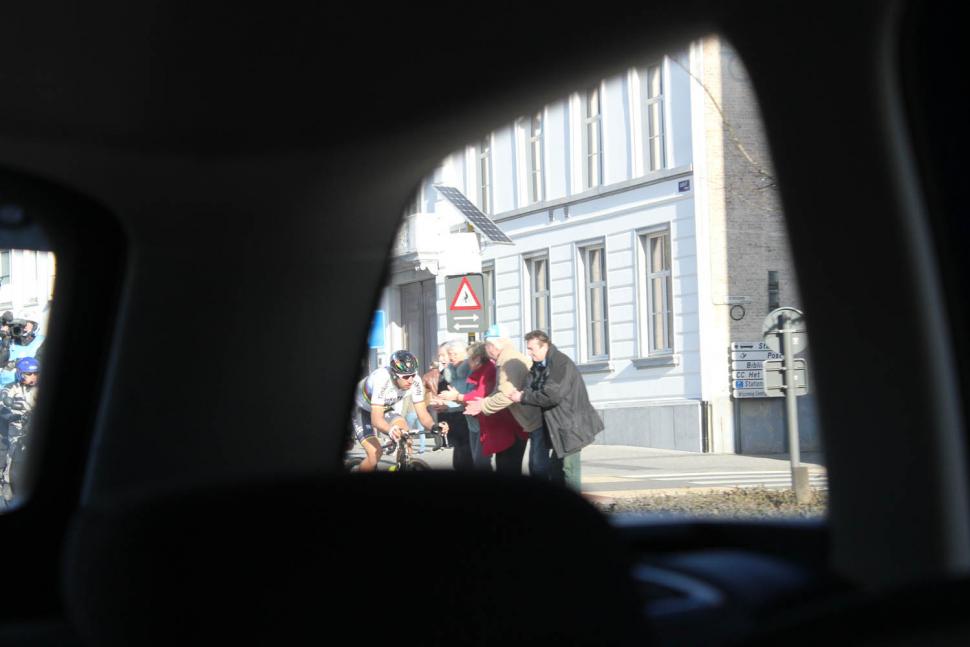 They are very different in style, Kwiatkowski is lithe and elegant on the pedals, whilst Sagan is more muscular, grappling with the the bike, up and out of the saddle frequently, mashing the pedals to his will. It’s fascinating to watch, and the view from behind offers more than a glimpse of the glutes of the world champion, and they are formidable! 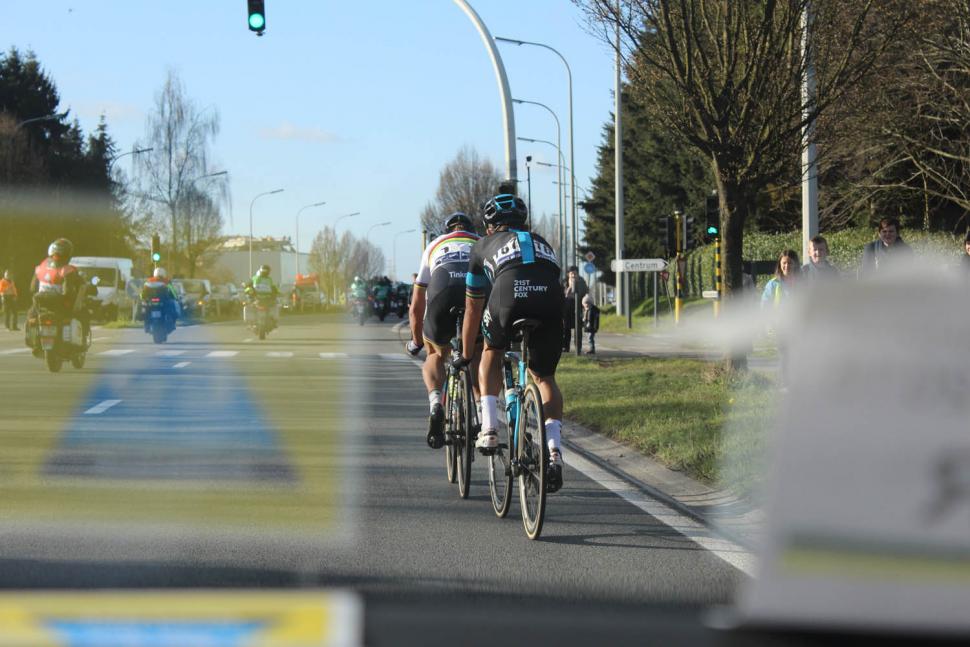 Most of the day we’ve played the role of glorified bottle carriers, carrying the fluids and snacks from the half dozen teams involved in the day’s first break, Roger Hammond from Dimension Data kindly offering us lunch, almost certainly energy gels! We’ve passed messages along, broken radios and a rider needed a drink, Rudie’s eyes spotted one of the riders in the early break almost certainly regretting his action, his body language seemingly not impressed at the effort about to be asked of him!

Our vehicle carries 3 bikes on the roof, stealthy frames with Shimano’s top end Dura Ace Di2 groupsets, a bunch of C50 wheels, with more in the car and in the boot. We also carry a set of Shimano’s RX830 wheels, currently the top-end road disc brake from the Japanese manufacturer. The RX830s will be redundant today as none of the teams appear to be riding disc brake wheels.

I’m tweeting and instagraming mid-race from inside the car, doing my best to get some decent pictures through the windscreen and by sticking my camera out the window.  A follower points out that the car is in the shot on TV, we really are that close to the action! I’m not going to lie, it’s pretty awesome!

The next 40 minutes is a masterclass in riding as we witness the two athletes bury themselves as they work together for the win. All the while Ivan behind me is scouting the bikes in front for any sign of an issue, his hand on the spare wheel next to him, he is poised and purposeful, fully aware that the eyes of the cycling world are on the action 10 metres ahead of us. The peloton is gaining on the riders now, with 3 km left the gap is down to just 15 seconds and we are instructed to pull out, my hopes of going all the way to the finish line are dashed, but as we pull away in front we head to the finish area ahead of the riders, once out of the pocket we speed through the suburban streets of Harelbeke, and with scant seconds spare we reach the finish line with just enough time to leap from the car and get to the barriers to watch Kwiatkowski fly past, a clearly cross Sagan passing just a  few seconds later.

The closeness of the charging peloton is evident when they appear moments later, Team Sky claiming two spots on the podium in the form of Stannard beating the pack. 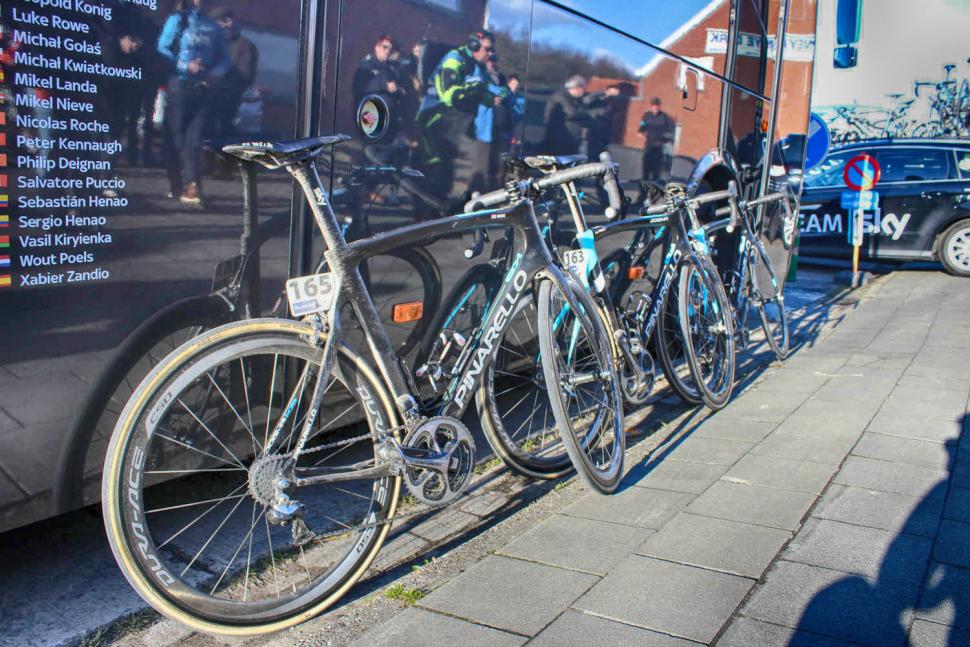 The top 5 riders are all using Shimano today. With no punctures or mechanicals to deal with it’s been relatively quiet, but what a day it has been. A victory for the brand, 2 breaks, world champion stripes at close quarters and sunshine in Flanders. Great Work E3!

Big thanks go out to Rudie and Ivan for looking after me during the race, and for Shimano for the invite!

In light of the tragic incident in Gent Wevelgem on Sunday it’s pertinent that I add this in to the end of this piece.

Rudie the driver has some skills on him, zipping along the back roads of Belgium with motos all around. The TV never really shows the sheer volume of motorbikes involved in a race the size of E3, but it seems that every rider within Flanders has been pulled in. There are the obvious ones, carrying TV, radio, and photographers, flitting around the head of the race, at times on roads barely large enough for a single car.

But every junction, every piece of road furniture has an outrider on, blowing their whistle and waving their flag, these guys (seemingly all males) perform an admirable job, rolling around the race at speed, without them the race simply couldn’t exist. Jonathan Vaughters explained that without the press the race loses exposure and sponsors, without the commissaires there would be rampant cheating, and without the outriders there roads would be unsafe to ride on. There was one moment during the afternoon when race radio seemed exasperated about the sheer volume of traffic on the road, the small Belgian roads compress the motos far more than the highways, and it can seem chaotic to say the least.

At times it seems we are jostling with a dozen press motos, not just cameras but also the radio and TV channels, and Rudie is performing precision passes within just a few inches of them. It is clear from talking with him that the rider is his absolute no.1 concern. In the event of an incident he doesn’t leave his car seat as he is race-side, and to open the door endangers the other riders on course, Ivan is the only one who leaves the car. It seems, at first, somewhat callous, but he is not a mechanic and he doesn’t have the medical skills of the first responders, so in the event of an accident or a mass tumble he would simply be in the way.

When I first get in the car I mention about not hitting riders, and that is Rudie’s worst nightmare. As an ex-pro himself he is more than aware of the danger he poses to the riders, and throughout my five hours with him it is clear that that concern drives him through every decision.