Back from Brighton
A 400km weekender to swap between two Mason bikes.

I've been testing the first two production bikes from Mason Cycles, and hatched a plan to ride down to Brighton to swap one for the other, before heading home. Just the 400km over two days, and on paper it looked fairly straightforward, if a bit wiggly in the lanes. Two 200km legs with 1,670m of climbing in each. How hard can that be?

Day one was offering an 18mph north-westerly tailwind all the way to Brighton affording an extra hour in bed to avoid the first rain we'd seen in a week. Admittedly when I got up at 6:30am it was still bone dry but within ten minutes it was hammering down. Thankfully it didn't last long and by the time Jamie and I had got to the first cafe stop on the outskirts of Salisbury the sun was out and the roads drying.

The stretch from Salisbury to Winchester was pretty much all country lanes and B roads, and what a beautiful route. That's the beauty of riding a bike, the scenery and wildlife you encounter that you'd never notice if you were driving. Rivers, country houses, it was all there and with that tailwind nudging our backs we were knocking off the miles with an average speed of over 18mph.

Come the Winchester stop we were half way and feeling good. We had a lumpy section ahead for the next 35-mile stretch with the biggy, a 14% climb touching 20% in places coming at mile 84. It's obviously a popular climb with the locals, as there was plenty of roadies out, but it took its toll on me. The first view of the sea from the top softened the blow.

From here it was all downhill to the coast so a final coffee and cake stop in Chichester provided a bit of an energy boost before cracking on. We hit the coast road pretty soon, and rattling though the likes of Worthing quicker than the traffic the end was in sight and it couldn't come soon enough. I haven't ridden over a hundred miles for the best part of a year and the cold air was starting to take its toll on my lungs.

Seven hours of riding later and we were there, Mason HQ to deliver the Definition and pick up the Columbus steel Resolution for the ride home. A couple of cheeky beers and time for bed, although sleep wasn't really forthcoming due to the mammoth amounts of caffeine I'd knocked off during the day. Day two started with clear skies and a nagging headwind which was to be with us for the rest of the trip. That was the least of our issues though. I presumed my Garmin 810 would just reverse the route we did yesterday but it didn't thanks to the fact it hasn't got maps installed. By the time we reached Chichester we were already four miles over budget.
Time for breakfast number two and what a breakfast it was. We'd clocked this little brasserie the day before and thought we'd give it a bash. Judging by the napkins and tablecloths, two blokes in lycra wasn't their usual clientele. Excellent coffee, freshly squeezed orange juice and scrambled egg with salmon sourdough toast may seem extravagant but with what was about to unfold it turned out to be a necessity. We missed a turning in Petersfield, a little cut through under the railway to avoid the main road and before long we were another ten miles off course. With the Garmin being pretty useless the iPhone was the only option though we ended up turning left rather than right. Jamie said he wasn't to blame, but it was his phone and that makes him responsible. To be fair the road was called Winchester Hill, but it was going away from Winchester, not towards it.

The fact that the wind was blowing on my right for the entire twenty minute climb did bother me, it should've been coming from the front and left for the entire route. Well at least we got a decent descent out of it when we turned round! This was the bad patch, we both blew and the talking stopped, it was all about getting to Winchester and refuelling. Bearing in mind this whole trip was about testing the bikes the Resolution came into its own here, for a bike that has such racy intentions descending into Winchester when your eyesight has gone and your arm muscles are struggling for energy its long wheelbase and planted feel was just what was needed.

We'd reached the next food stop though, 75 miles in with 60 to go. Thanks to the wind and extra climbing we were struggling to average 15mph. 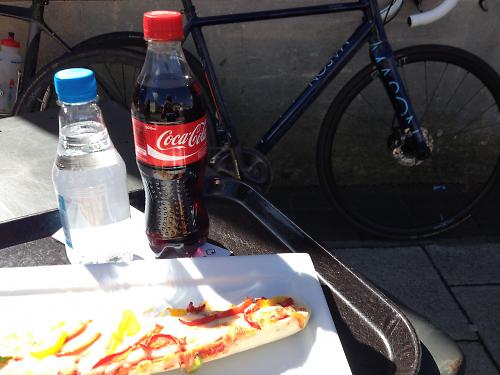 Things were to take a turn for the better. We nailed every turn from memory back to Salisbury. The sun was out and the cycling tan was taking shape though while my body was feeling fine my mind was taking a battering. The constant headwind was driving me nuts!

We cut out Old Sarum and headed straight through the city before picking up the Wylye valley, the final stretch home. The chat was more light-hearted the closer we got and as a bonus the last three miles gave us the only tailwind we had for the entire 133 miles.

And so we were done. The feeling of achievement quite euphoric considering we'd left the same point the day before and been to Brighton and back, a return trip I wouldn't really consider in a car over the course of a weekend.

The bikes: simply brilliant, comparing the two back to back really highlighted the similarities of the two materials along with the subtle differences.  The alloy Definition (read the full review here) is designed as the punchier of the two and certainly suited the tailwind blast down to the coast. It's comfortable too, so a real ride-it-hard bike for long distance. The Resolution (review coming soon), coming with that buttery smooth steel ride, was perfect for day two when the muscles were starting to feel a little abused, taking the edge off the rough road surfaces towards the end.