It’s not everyday you get the opportunity to ride a team issue race bike, much less one ridden by Grand Tour stage winner Michael Rogers on stage 5 of this year’s Tour de France. Yet that was precisely the fortunate position I found in on this occasion, in the garage underneath the hotel in the centre of Oudenaarde with the Tinkoff-Saxo mechanic adjusting my saddle height and fitting my pedals. 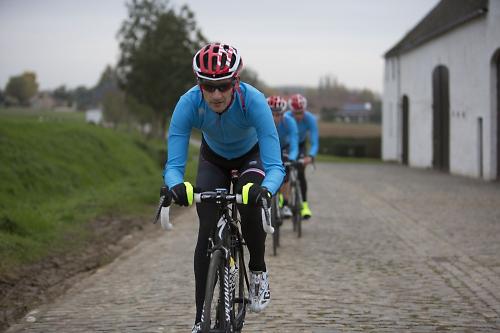 As we’re riding in Flanders, home to the iconic pavé and Helligen - cobbled climbs -  used in the Tour of Flanders (or Ronde Van Vlaanderen if we’re being proper) I’m about to swing a leg over the Specialized Roubaix SL4. This is the bike the team use for races like Tour of Flanders and Paris-Roubaix, and endurance bike with a longer wheelbase, relaxed angles and space for wider tyres than the regular Tarmac race bike. It’s regularly used for the spring Classics, and for one solitary stage of this year’s Tour. 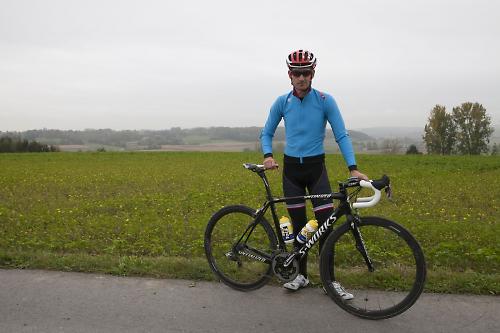 The assembled journalists had the use of the entire fleet of bikes that were prepared and raced on stage 5 of the Tour de France. I plumped for one belonging to Australian Michael Rogers, because it’s a 56cm, my preferred size. Rogers is 6’ 1”, a good inch or two taller than me, but he must be all arm because the bike has a whopping great 14cm stem fitted. And it’s slammed, naturally. 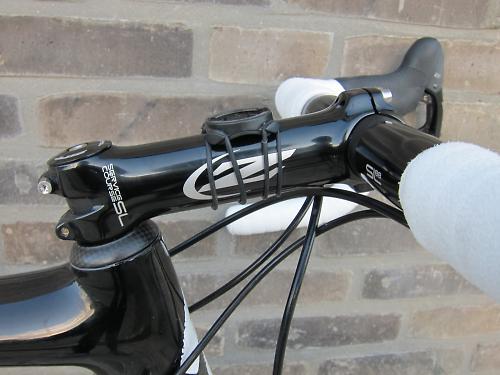 At first it feels like I’m simply riding a bike that is too big for me, but slowly I become acclimatised to the reach. In fact, on the second ride the following morning I feel quite comfortable with the longer stem. Just goes to show how quickly the mind and body adapts to a bike. I’d still knock the stem back a bit though. All the bikes are fitted with Zipp stems, handlebars and seatposts, with a Prologo saddle (my fave saddle choice) showing good sign of wear on the edges, suggesting this bike has had some use at least. 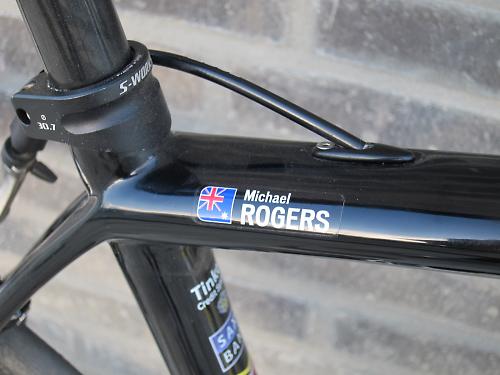 Speaking to Specialized after the event, it turns out these bikes were brand new and delivered to the team before their recon of the Tour de France stage 5 earlier in the year, and then used for one single stage in the race. So this bike, and it’s difficult to say with certainty if Rogers actually used this bike (but the slightly worn saddle suggests it has had some use) or if it remained on top of the team car as a spare, has had very few miles pass under its tyres.

Suffice to say, the bike felt brand new and very tight as well rolled out of Oudenaarde heading for the famous pavé. The SRAM Red gears snicked across the cassette with more precision than any SRAM-equipped bike I’ve ever ridden. The shifting felt heavier, more definite. The brakes were noticeable in their exceptional power and modulation. The bike was equipped with a 52/36 chainset and 11-28t cassette, which certainly helped on the steeper sections of the Koppenberg and Paterberg. 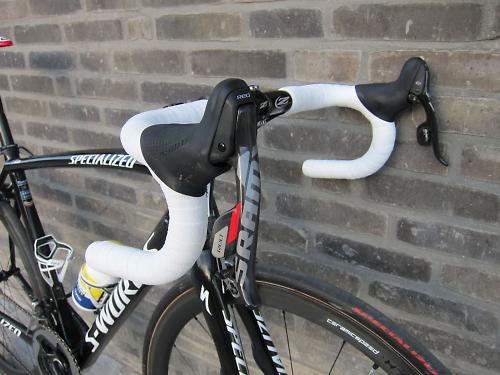 The bike wasn’t rolling on the same tyres as Rogers will have raced upon however. Specialized’s own Roval CLX 40mm deep carbon fibre tubular wheels were fitted with Specialized All Around 24mm tubular tyres - the team would have raced 27mm wide FMB tubulars in the race. Expensive tyres that they are, they were undoubtedly hidden away somewhere safe immediately after the race, they’re certainly not going to let a bunch of hacks abuse them. 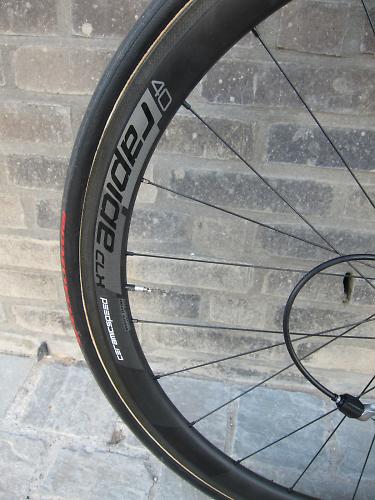 The first time I’ve ridden these Roval wheels and first impressions are they’re noticeably light with the claimed 1,200g weight giving the bike great acceleration and easy momentum. They feel stiff during changes of direction and sprinting out of the saddle, but surprisingly compliant over the pavé. The rims are 23mm wide which provides a nice overall profile and wide bead seat for the tyres. Inflated to 6.5 bar (about 95psi), the tyres provide a good balance for the parcours we’re riding, mostly tarmac with occasional pavé. And farm tracks.

Interestingly, Nicki Sørensen told me that he rode a Venge - yes an aero bike - in his first attempt at the race this year (he finished 13th, a credible result for his first stab at the race) with 28mm tyres fitted. He went on to explain that there was just one section of cobbles when he regretted the bike choice, the vibrations so severe his vision was impaired. Yet the performance was so good everywhere else that it was a small compromise he concluded. While the cobbles do dominate the outcome of the race, they actually make up a small percentage of the overall route. 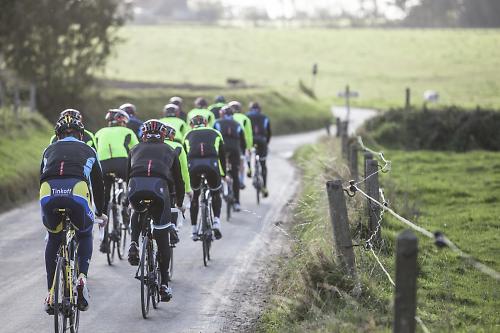 Even with these narrower tyres inflated to quite a high pressure (the pros would have gone as low as 5 bar when racing on the pavé) the bike was impressively stable, smooth and easily controllable over the cobbles. Now I’ve ridden a fair few bikes on the cobbles of Flanders and Roubaix over the years, but none have felt anywhere near as smooth as the Roubaix. It’s in another league. 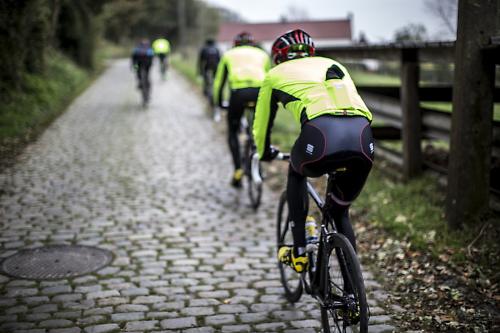 It was perhaps the stability that most struck home as we hit the cobbles, especially the Oude Kwaremont, one of the rougher roads we ride. It simply wasn’t bounced off line without a considerable hole or impact. I’ve ridden bikes that just rattle and shake you to bits as they tyres skitter across the top of the cobbles. This wasn’t the case with the Roubaix, it really seemed to just soak up all the small to medium sized impacts with very few jarring vibrations passing to the hands or bum. 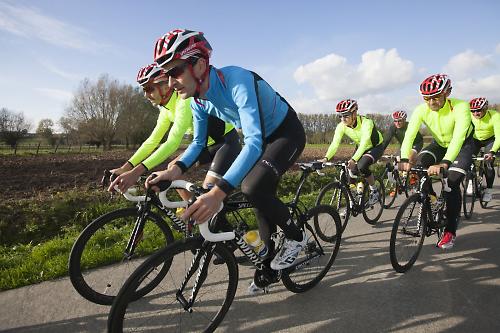 The slightly slacker head angle and longer wheelbase (1000mm compared to 978mm) making its difference felt here. It was so stable that I could ride, on the cobbles, no-handed quite confidently. I’m not recommending you do that, but it’s testament to the control and smoothness of the bike.

On the climbs it was light and agile and made short work of the Koppenberg and Paterberg, and on the longer Oude Kwaremont, one of the longer cobbled sections, I didn’t feel a complete juddery wreck at the top as I have on other bikes I’ve ridden up here. Okay so this isn’t a conclusive test by any means, but seat of the chamois impressions are very revealing. Back on the smooth tarmac the Roubaix felt nippy and rolled along at a high pace with relative ease. 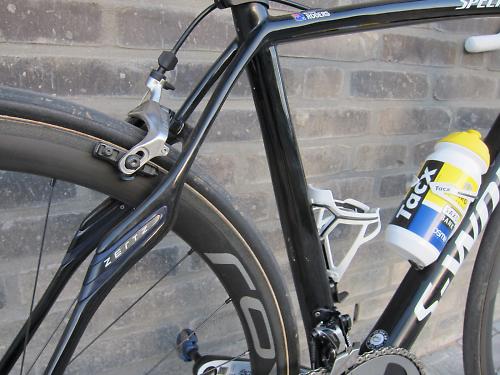 While the bike in the photos here might look the same as the Roubaix SL4 in your local bike shop, and they do share the same defining features, most notably the Zertz inserts in the fork blades and seat stays, there is one big difference: the head tube length. A stock Roubaix in the same 56cm size as this bike has a 190mm head tube, this pro edition Roubaix has the same head tube length as the Tarmac, 160mm.

The reason for that modification is quite simple, the pros prefer the lower handlebar position and having the Roubaix the same as the Tarmac allows them to swap between bikes with no impact on their position and fit. Specialized supplying this custom frame to the team also means they don’t need to fit any ridiculous negative rise stems like we see some having to do with the pavé bikes. 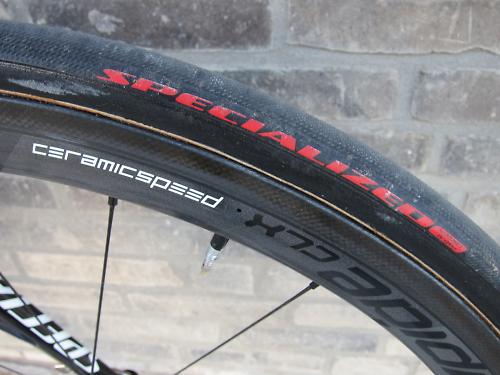 Most endurance bikes offered by manufacturers need to fulfil two purposes, appeal to non-racing cyclists who want a comfortable bike and appreciate the taller front-end, and be useful for the pro team to use in the cobbled Classics. That’s why you see some teams using stock bikes with negative rise stems to offset the tall head tube, and some like Trek offering previously team-only editions with shorter head tubes. And some riders, like Peter Sagan, get their own custom frame which is pretty much bespoke and nothing like you can buy in the shops. 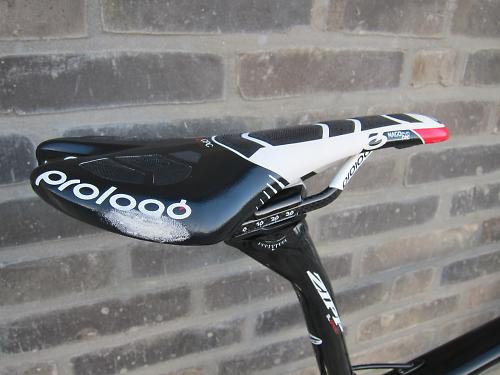 We’ve seen Trek make the pro version of their Domane, which has a shorter head tube, available to the public recently, but there are no signs that Specialized are set to do the same. It’s a shame, I reckon this Roubaix would appeal to a lot of cyclists who value the comfort and bigger tyre capacity but don’t want a high handlebar position. I’d certainly stick my hand in the air for one.

In essence, the Roubaix SL4 seemed, based on the two rides I used it for, to offer all the performance and speed of a regular race bike, but with the extra stability and comfort that the comfort features and longer wheelbase offer. 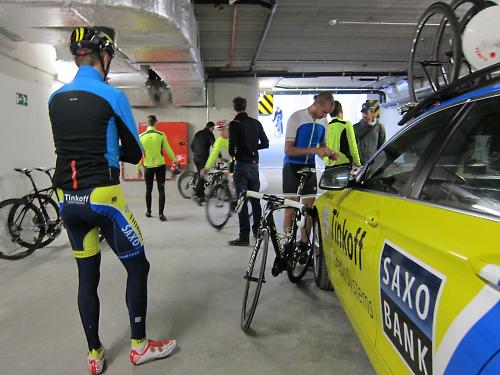 It’s difficult to say how much the Zertz inserts in the fork and seat stays contribute to the ride comfort. There was clearly a fair amount of flex in the 27.2mm Zipp seatpost and carbon railed Prologo saddles: following another rider on the same bike it was easy to see how much deflection was evident in these components. The comfort is the sum of these parts, each plays its part in the overall ride feel. To ride a team issue Tarmac with the same wheels, tyres, saddle and seat post - as Nicki Sørensen was riding - would have made for an interesting and perhaps revealing comparison. 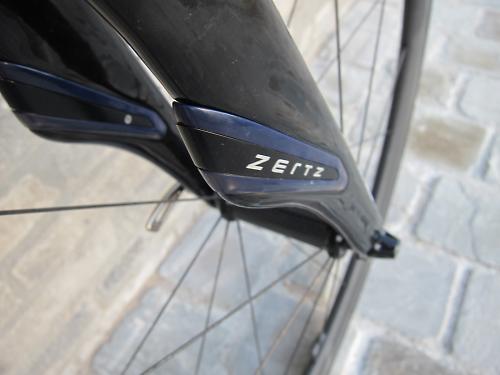 It’s a rare opportunity to ride a professional race bike, much less one as rare and unique as a custom bike made for the cobbles. The Roubaix SL4 in this build was an exceptional bike on the pavé with impressive smoothness. The geometry of the team-only edition bike is appealing to someone who values comfort and wants the longer wheelbase and increased tyre clearance of these modern endurance bikes, but doesn’t want the hugely tall head tube of the bikes being sold in the shops. It’s just a shame Specialized don’t offer this geometry on the stock Roubaix SL4.