You've probably heard of The Rules compiled by the Velominati. They've had an influence on many. The Rules took the cycling world by storm and eventually became a book; if it was adapted to a movie, it would have to star Charlton Heston, if he's still alive [...googling...] ok, Tom Hanks, who doesn't have the desired gravitas but does have experience in film treatments of Dan Brown novels.

The Rules are decidedly old school, which is fine if you're a traditionalist, not so great if you're not so reactionary. You can't just write your own: an authority figure is required to impart them with the necessary stature, as prophets of all persuasions have realised over the years.

When I first beheld it in my hands the screen was blank, but not for long. That night I must have entered a trance state, because the next morning this new set of rules had appeared.

A bit wary – and if I'm honest, unwilling to shoulder the responsibility of transmitting this information to the masses – I immediately erased it and taped down the knobs for good measure. Not to be deterred, come that night His Eminence once more induced a trance to repeat the exercise, this time forcing me to eat a fish pie afterwards to teach me a lesson. Readers, the pie made me sick, but it humbled me, which was the point.

If any of these rules do not sit right with you, please remember not to shoot the messenger. Kindly direct any foul oaths to the heavens.

THE RULES – NEW TESTAMENT
Of course they're meant to be taken seriously. That's why the heading is in all caps.

#1 - Cycling is about freedom
That includes freedom from being told what cycling should be about. Let's call this the Golden Rule. In fact, this list could almost end right here.

#2 - Forgive those who trespass against you
Even if they're driving a white van. But get their number plate first.

#3 - Harden the F*** up, C***
This one was in the Old testament, but has evidently been hardened in honour of Bradley Wiggins. (It's NSFW; work is Not Safe For Life.) A little tough love from above to prepare you for the school of hard knocks.

#4 - Matching, smatching
Just as it's OK to wear socks that don't match (more of a life rule), there's no prohibition against components which don't photograph well. Dilettantes, see rule #3.

#5 - Faster isn't always better
Being a rouleur is fine. Tours de France are fine. Even commuter challenges are fine, if they keep you out of trouble. Any activity which pits your muscles and wits against competitors is fine; it may even be sublime, at times. The need for speed should not infect those who have other needs, and who may be perfectly happy pootling from A to B without making a Strava segment out of it.

#6 - The correct number of bikes to own is X
X is however many your partner or roommate or mother will let you own before they turn into an Ex (excluding mums, hopefully). Relationships are more important than bikes.

This rule has a corollary, The Rule of Acquisition. If you have a partner, keep her or him informed about major purchases.

#7 - Wave
Note that you don't literally have to wave. A half smile is also OK, as is a raised eyebrow. It's not a touchy-feely validating exercise; it's about being receptive to our shared – and on a bike, much more visible – humanity. Or something. Don't forget pedestrians and motorists; this is known as maintaining good relations with civilians. Situational of course, else you might never get any riding done for the sake of all your ambassadorial duties.

#8 - Weave
That's right: filter. My understanding is that this isn't so much a diktat as it is divine permission for those trained to hold the line no matter what. Not only is it your right as an enhanced road user to insert yourself into interstices, perhaps throwing in the occasional wobble to show you're only human, but inhabiting the space between things will help you experience the full joy of cycling.

#9 - The pockets rule
If you wear a conventional jersey, don't put anything in the pockets which you wouldn't want in your back should you come off and land the wrong way. Preferably don't buy a jersey which has pockets you don't need. Wear whatever is comfortable, of course; but don't assume that just because it's in a bike shop, it belongs in your closet as well.

#10 - Shaving
If you shave your legs, don't use your wife's or girlfriend's razor. Women, however, are permitted the use of any damn razor they want. They can also wear your shirt, while they're at it.

#11 - Support your local bike shop
Only if it isn't staffed by people trying to sell you stuff you don't need, and doesn't have cute signs in the workshop that say they charge more for labour if you want to watch or help.

#12 - Earbuds are not the devil's earwax
It's your head, fill it with what you want. Cyclists don't have bat ears that they depend on to find their way in the world, and so are free to carry a tune. 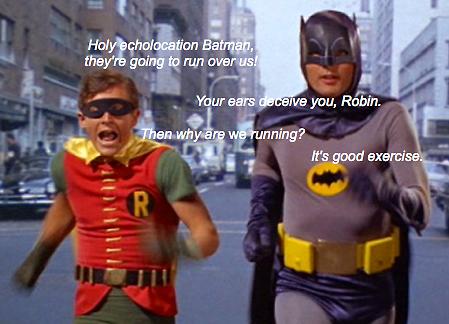 Ears are keen, but the eyes have it.

#14 - Thou shalt not be be a bike snob
In public. In private, be anything thou pleaseth. Shaming others onto the consumer conveyor belt is not cool. (His Eminence still uses words like "cool".)

#15 - The Quicksilver Rule
Don't feel compelled to watch anything just because 'two wheels good'. Kevin Bacon called his courier caper "the absolute lowest point of my career." Even those not closely related to Bacon by a casual chain of encounters felt the sting of a bike-themed movie belly-flop. When Pee-wee Herman can win more hearts and minds by doing this than employees of the Quicksilver Express can doing this, it's time to remind everybody of the unnumbered Breaking Away rule: Breaking Away is and always will be the best bike movie ever made.

#16 - Don't litter
Also a holdover from the old testyment. If you've insisted on buying jerseys with pockets, put that crap in there.

#17 - Cycling is about freedom
A little repetition goes a long way.