by themartincox
When Rule 5 isn't enough....

My first race since 1995. yes, 1995! Back then I was a pain-averse teenager, quite happy at bumbling along on single track on my hard tail MTB, but precisely hopeless in the cut and thrust of a race, I was more likely to go back up the hill to have another go on the bomb-hole jump at the bottom. My palmares consist of an 11th at the national schools cyclo-cross in ’93 (it would have been 8th had I not wiped to into a prickly bush on the penultimate corner).

When I saw that BUCS (the University sports folks) ran events for cycling it was obvious that the MAMIL in me was going to enter, despite being old enough to be the dad of some of the other competitors…

After the swift arrival of a Canyon Speedmax AL 9.0 TT bike I set about training for the sprint that the TT would be. Mix in my priority being the Transcontinental race in the summer and also a more pressing need to submit 16,000 words for my masters degree at uni in those same 6 weeks and training takes a knock down a rung or 4!

My race plan is simple, don’t be last returning home - there’s 120 due to start and I’m 8th from the end, and it seems the 7 after me all have race licenses according to the BC site. My plan is to try and complete in about 1hr 10, I think that’s respectable for a first attempt, but in reality I’ve no idea!

I ride up to the starting point and I’m ready. Get to the start line and the chap very kindly holds my bike up to allow me to clip in - this is new to me and lets just say it doesn’t work, at this stage the guys behind me can clearly see I’m a novice and they set me as an easy carrot to catch!

The pedals start to turn, slowly at first as I try to find the right gear as the course starts into a swirling head-wind, I’m soon up to speed fighting the wind whilst trying to keep in the aero-bars. Ok, this is fine, it’s up to about 21mph according to the little Wahoo computer in-between the bars. Within a few minutes I’m up to around 24 mph and the heart rate is up to 176 bpm it’s feeling more than is sustainable, a quick change of gear and the speed drops just 1mph but the heart is settling down and I’m happy at 23mph with 165bpm.

The wind is all over the place, hitting the deep-section Mavic rims and knocking me around a little, but that’s ok, it’s going to be like that for everyone, just keep to either 23mph or 165 and it’s going to be fine. The first roundabout is cleared with no problems, just aware that after the poor first couple of miles I will have lost serious ground to the guy behind me (I’ve not seen anything of my 1 minute man). WHOOSH! there he goes, disk wheel a-humming - I attempt to keep up - not a chance!

2nd roundabout and I’m flying (compared with previous), up to 24mph with the same 165 heart rate, and feeling strong. 8 miles in and still no-one else has overtaken me, the heart rate is good, the speed feels controlled and I’m sure I can keep this up. With the return leg being with a tailwind I'm feeling, almost, happy.

The side-wind is still there, buffeting me around, trying to stick as close to the white line as possible but being knocked to my right maybe 18” in the gusts. I’m acutely aware that the gutter isn’t the best place to be, however with the sidewind I want to stagy as far from cars as possible, so it’s white line riding as much as I can.

A gust. 12” to the right. Over a cat-eye. SMACK goes the rear wheel. Somethings different. There’s a slight noise from the rear. Getting louder. Look down. Heart sinking. Pressure is dropping in the tyre, I can hear the valve, now I can feel it. Game over.

Disappointment fills me, I know this is the end. I attempt to ride it out, see what happens - not a chance. I stop. Dripping in sweat, head down, the guy 2 minutes behind catches me, he wasn’t going to get me by the 1/2 way mark, more disappointment. I just stand there, not a happy bunny. Slowly, I unpin my number. and walk across the dual carriageway , understanding that I have to ride 10 miles back with a flat tyre on carbon rims. Cross.

It’s a very sad sight, someone slowly riding back along a race course, with the painful, grating, noise of empty tyres as they turn on the asphalt - there are no thoughts of discarding the tyre and heroically riding on rim alone - budgets don’t stretch that far and there’s a fine line between heroism and stupidity. 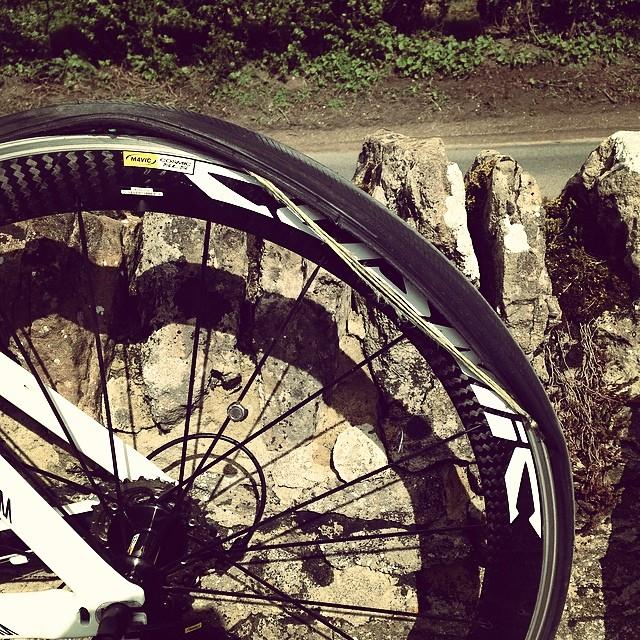 Constantly overtaken, thoughts of what might have been. Frustration, so much frustration. Get back to the car park and the overwhelming desire to throw the bike (I don’t).

Sitting in the car, the bitter, acrid, taste of failure in my mouth, yet thoughts turn to hunting out a local TT and competing again.