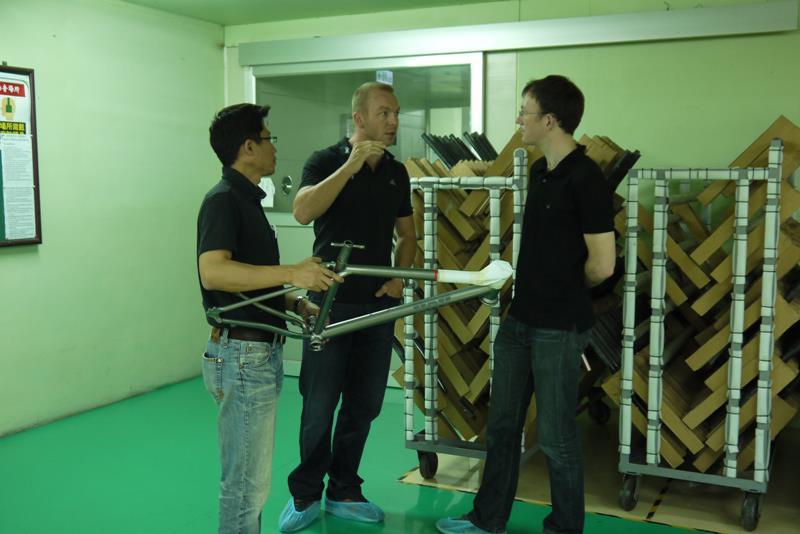 Sir Chris Hoy: I ride every bike I sell, and there’s no carbon frames - it’s all about the fit

Since retiring in April having become the most successful British Olympian of all time in terms of gold medals, Sir Chris Hoy has hardly been resting on his laurels.

Speaking to Richard Moore on the Humans Invent website he explained that instead of buying a boutique hotel in France he’s been hard at work designing a range of bikes for ordinary cyclists, ranging from an urban £550 model, up to the race-ready £1350 Sa Calobra 04.

Sales success is said to be rapid, thanks to a partnership with Evans Cycles bringing Hoy Bikes to high streets up and down the country - and that means there are a few to be spotted out on the streets and the trails already.

"It really is an amazing feeling when you see someone out riding one of your bikes," he said.

"To think they've gone to the shop and chosen your bike."

Of course it’s not the first time Sir Chris has turned his hand to selling a bike. Speaking of the days when as a teenager, he worked in a bike shop, Recycling, in Edinburgh, he said: "I'd get the real rust buckets, and have to go at them with the steel wool and T- Cut, scrubbing all the muck off, or as much as I could, then sticking on new tyres, and making sure the gears and brakes worked.

"I loved it, absolutely loved it - the banter, the oily smell of the place, being surrounded all day by bikes."

Of course the bikes Hoy made his name on were not the BMX and mountain bikes he favoured as a youth, but instead brakeless, gearless track bikes - and he says he's keen to get back to singletrack riding - perhaps on one of his own steeds.

"I'm involved in the design process, testing the bikes - I ride them all, apart from the kids' models - and I'm also involved with the marketing and promotion," Hoy said.

"It's a lot of fun and there's so much variety. We're always testing new things and testing competitors' bikes.

"The next thing is to launch kids' track and road bikes, and we've got a new track bike I've been testing in Newcastle. There are about seven or eight new models coming out in the next few months, including a higher spec road bike."

He's also been on trips to the factory in Taiwan where the bikes are made - and unexpectedly experienced an earthquake measuring 6.1 on the Richter scale.

"We were on the 15th floor in our hotel and we felt the building shaking then swaying," he said.

"Pictures fell off the wall. The water inside the toilet bowl was slapping over the sides.

"We ran down the fire escape and burst into reception expecting mayhem. But the concierge smiled. It seemed pretty normal to them. They were used to earthquakes. We felt pretty stupid."

Despite the fact that carbon bikes can be manufactured relatively cheaply in the far East, it's not an option Hoy plumped for - even on the high end models.

"We've opted so far for aluminium instead of carbon," he said.

"There's a full carbon fork but we believe that for the money we can get a better quality aluminium frame. And the money you save on that, you can put towards components so you get better gears, better brakes, even a lighter bike than you would with a lower-spec carbon."

In fact spec is not the big sell on the bikes, he explained: "The biggest thing we're focusing on and pushing is fit: making sure the bike fits.

"It's one of the things that really annoys me when I see people out on bikes. I love seeing people on bikes, but I hate it when their saddle's too low, or at the wrong angle, or their bars are too wide, or too narrow or too high.

"They look uncomfortable; they're clearly not having a good time; they could be going a lot quicker for the same effort.

"So many people pack it in because they think they don't enjoy it, because cycling gives them a sore neck, or a sore bum. But often it's just a case of the bike not fitting properly."

Although the frames come in standard sizes, Hoy said, "we offer different crank lengths, bar width, stem length - you can interchange all the parts to tailor the bike to the right size."

We’ll be running a competition soon giving you the chance to win your own HOY Bike.  HOY are only doing three of these bikes, and each one is different. They're numbered in true special-edition style and each one is signed by the man himself.