Chris Hoy builds up some very special HOY bikes... and you'll be able to win one

We were luck enough to hot-foot it over to Bermondesy yesterday to catch up with cycling Knight-of-the-Realm and all-round top chap Sir Chris Hoy, who was in town working on a very special project with Evans Cycles, in between racing Radical SR1 sports cars and sticking his head above the parapet in the Cycling Champion debate.

Evans, of course, have been working with Chris to bring his bike range to market. HOY Bikes launched earlier in the year with two models, the Sa Calobra road bike and the Shizuoka urban bike; we have one of each on test at road.cc at the moment. But yesterday's meet-up was to put together some unique special editions: HOY Autumn. 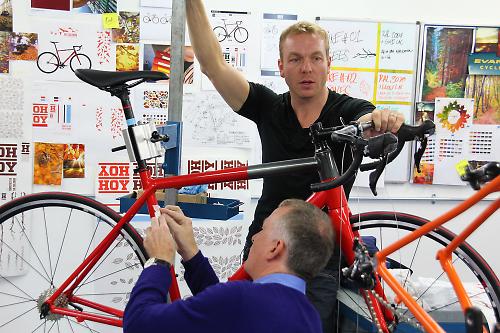 HOY bikes have taken three Sa Calobra frames and given each one a custom paint job, and it was Chris's job yesterday to spec the parts and build them up. He even applied the custom autumn-themed decals to the frame. Look, here's the proof:

Anyway, what that adds up to is a very special bike indeed. Unique, in fact. HOY are only doing three of these bikes, and each one is different. They're numbered in true special-edition style and each one is signed by the man himself. 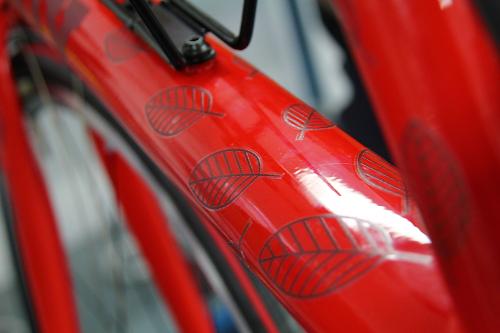 There was a fair bit of colourful and garish finishing kit on offer but in the end the autumnal looks of the frame dictated that the bar tape saddles, cables and such be chosen from a fairly muted pallette with a few highlights. The end result is some lovely-looking bikes. And what would you pay to own such a bike? Well, you can't pay to own one. But you can win one. Evans will be giving two of them away in autumn-themed competitions. And guess who's got the other one? It's us is who. And we'll be handing it over to one of you lucky chumps, so stay tuned for the competition in the coming weeks...