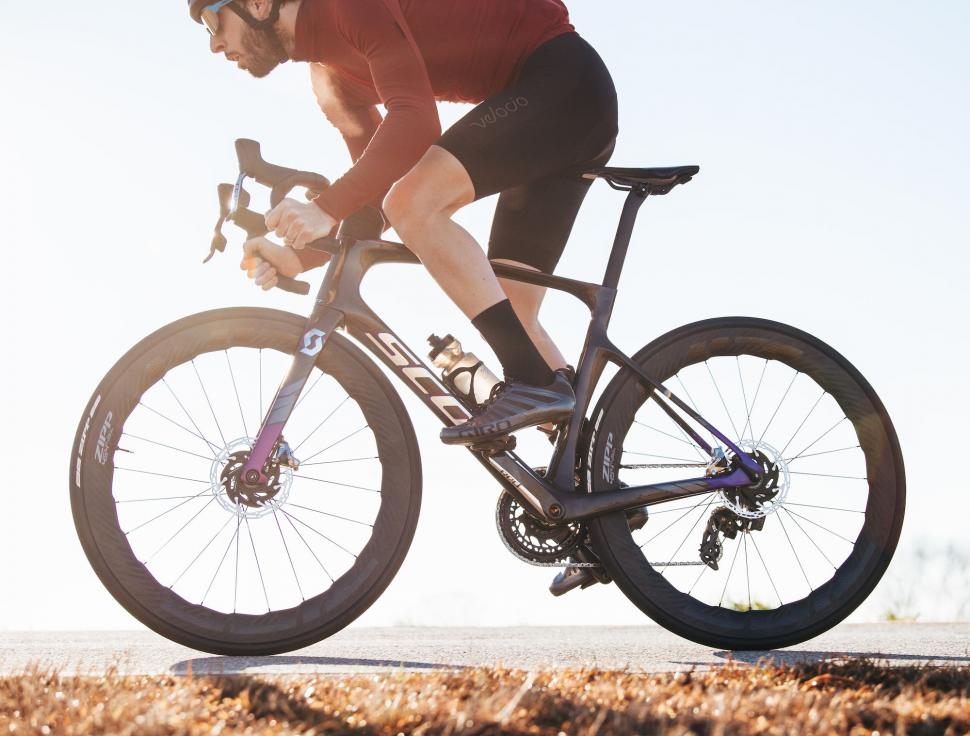 Zipp has launched four updated disc-brake wheelsets – the 454 NSW in tubeless and tubular configurations, the 404 Firecrest, and the 858 NSW – claiming that it has been able to increase efficiency and with it speed while dropping both the weight and price in a couple of cases.

Whereas the SRAM-owned brand at one time spoke almost exclusively about aerodynamics, Zipp is now keen to talk about the Total System Efficiency (TSE) of its new wheels. While reducing wind resistance can lead to greater overall efficiency – and so an increased speed for a given power – so can minimising the effects of gravity, rolling resistance and vibration losses.

Improving aerodynamics can sometimes result in increased weight and rolling resistance, leading to a reduction in overall efficiency, so Zipp says that it seeks to optimise its wheels taking all of these factors into account.

With this in mind, Zipp has increased the internal width of its 454 NSW Tubeless Disc-brake (main image, above) and 404 Firecrest Disc-brake rims (below) so that they’re better able to work with wider tyres. Swapping from a narrow rim and narrow tyre to a wider rim and a wider tyre results in a wider and shorter tyre contact patch between the tyre and the road surface. 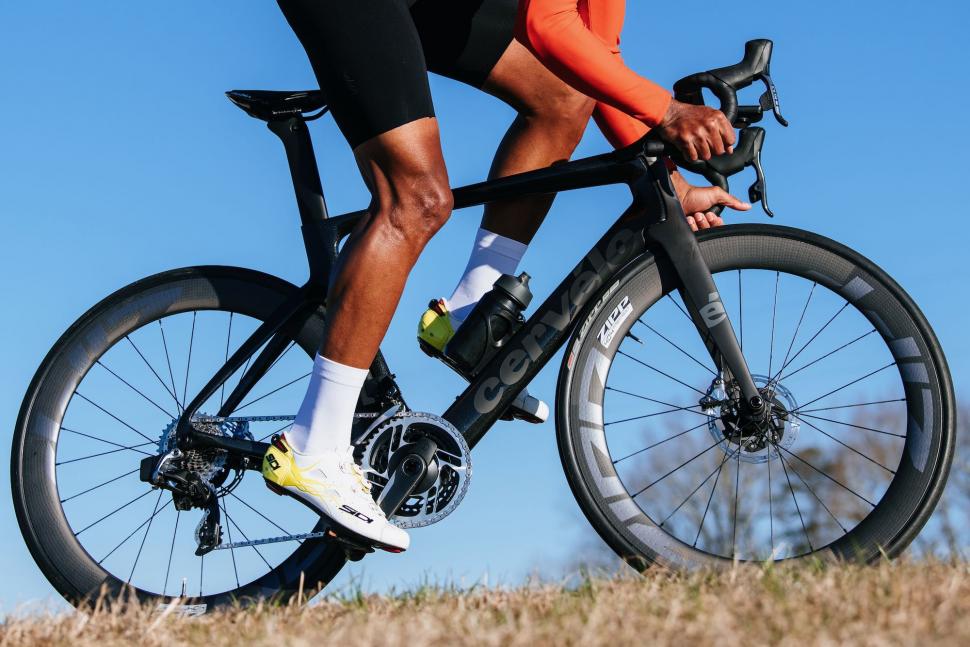 > Rolling resistance: why you need to choose your tyres carefully if you want to ride faster

“With hookless, the transition between the tyre and the rim is more seamless and aero,” says Zipp. “[Our] hookless rims have more efficient resin distribution, which means lighter, stronger wheels.” 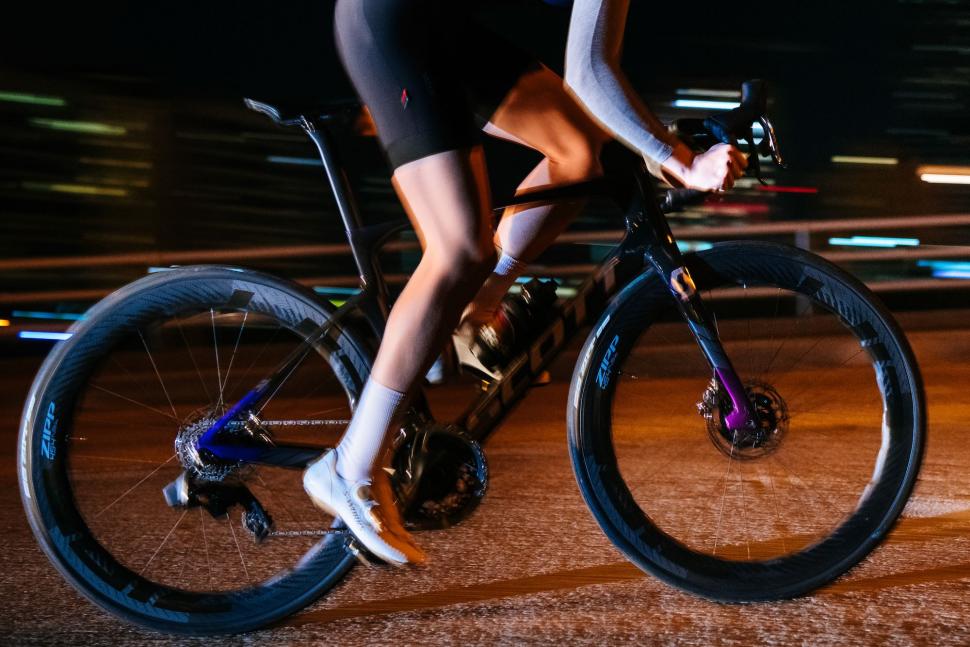 Zipp also says there’s no need for a silicone mandrel in the production process, it can use a reusable metal mould instead, and that the level of accuracy this allows means there’s less scrap so it’s a greener solution.

Zipp says that its hookless wheels conform to ETRTO and ISO standards but until all tubeless tyres do the same you should check out its compatibility list.

Let’s go through the wheels in turn… 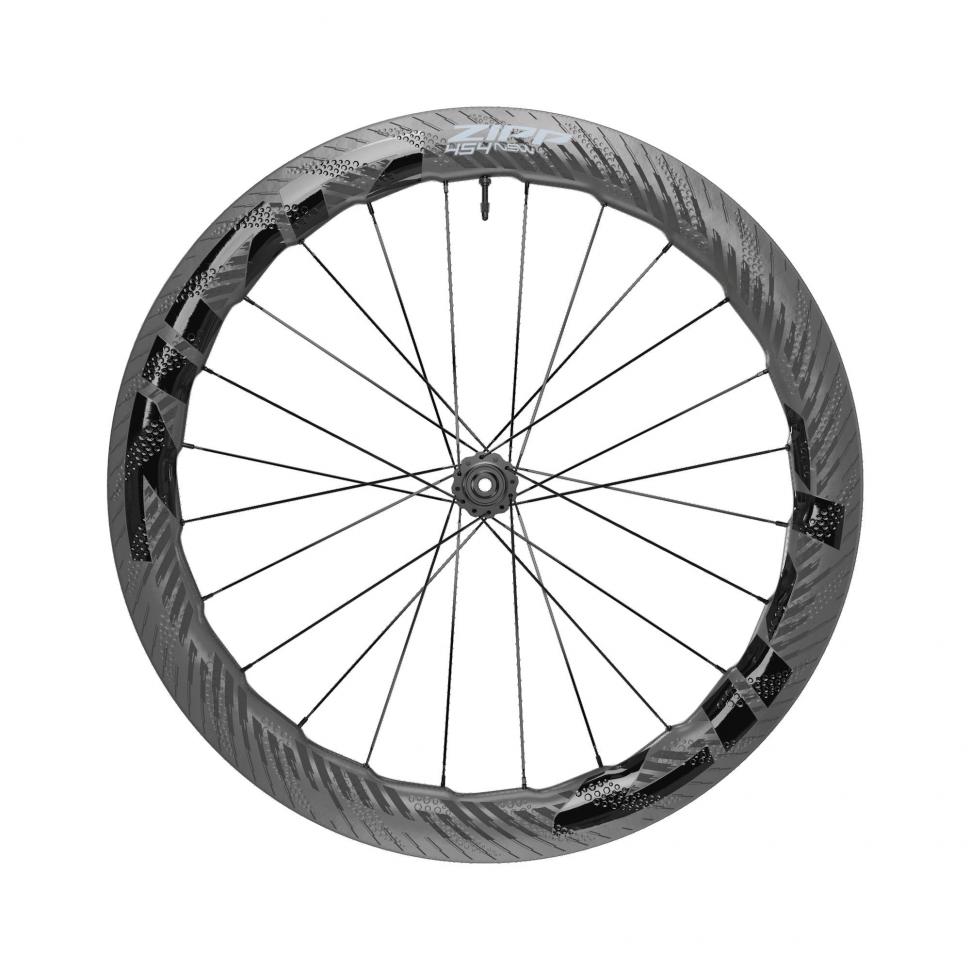 Zipp calls the updated 454 NSW Tubeless Disc-brake “the ultimate road racing wheelset”, saying that it offers aero efficiency and crosswind stability, plus a much lighter weight than previously and a wider rim that’s now hookless.

NSW is the name that Zipp gives to its top-level wheels and the 454 has featured the brand's undulating 53-58mm Sawtooth rim shape for the past five years (get more details on the design here) but the rim is now much wider than previously with an internal width that’s up from 19mm to 23mm.

“A wider rim is designed for tubeless tyres at lower pressure for reduced rolling resistance and vibration damping, so you’ll lose as little energy as possible out on the road,” says Zipp. “This wheel is optimised for 25mm tubeless tyres for all-out speed.” 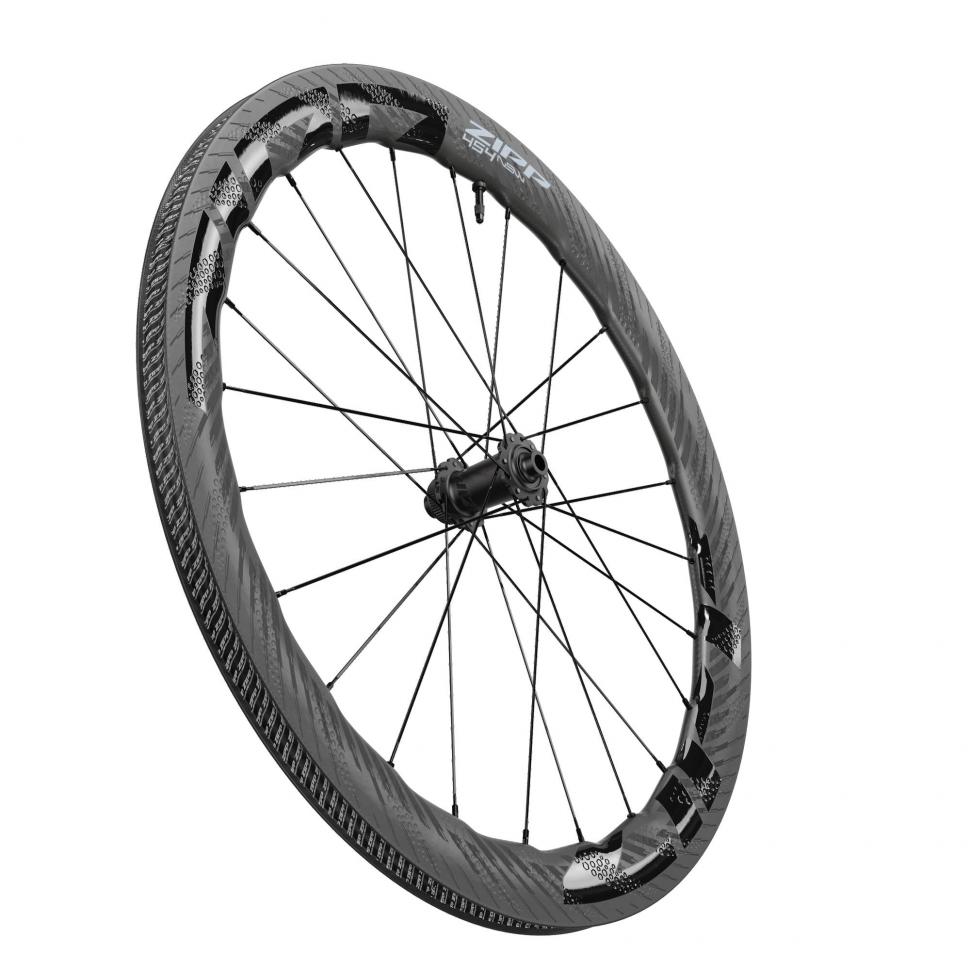 The rim is also hookless and the updated Zipp 454 NSW Tubeless Disc-brake wheelset drops weight massively from 1,815g to a claimed 1,358g (631g front, 727g rear). This is the lightest configuration with 12mm thru-axles and an XDR body; no tape or valves are included in this weight. That’s an astonishing reduction of well over 400g.

Zipp says that it commissioned Aero Lab Tech to undertake on-the-bike outdoor testing of the new 454 NSW Tubeless Disc-brake wheels fitted with 25mm tyres, and the results say that a bike-and-rider system weighing 85kg (187lbs) would require 278 watts to maintain a speed of 40km/h (25mph). That’s 10-watts below what’s needed to hold the previous model 454 NSWs at the same speed.

Zipp says that this advantage is not down to aerodynamics, it’s that the efficiency of the whole system has been improved because the wider rims allow the use of wider tyres at lower pressures, resulting in lower rolling resistance.

The 454 NSW now features the second version of Zipp’s Cognition hubset which has been “re-engineered with an updated Axial Clutch V2 mechanism for quicker engagement, lower friction, and improved durability”. This is the same hubset that features on the 353 NSW Tubeless disc-brake wheelset that Zipp announced back in April.

The first version of the Cognition rear hub used six magnets to engage a 36-tooth ratchet. The magnets pushed an inboard ratchet ring away from the hub shell, locking into the outboard ratchet, engaging the driver body. As long as you were pedalling, the ratchets stayed engaged.

However, magnets don’t feature in the second version of the Cognition hub. Instead, Zipp now uses a Sylomer foam system which is said to be lighter and simpler with 23% less drag when coasting at 40km/h. You also now get 54 points of engagement.

The other big change to this wheelset is the price, and it’s not in the direction you might expect. Whereas the wheelset price was previously £3,571, it’s now £3,200. 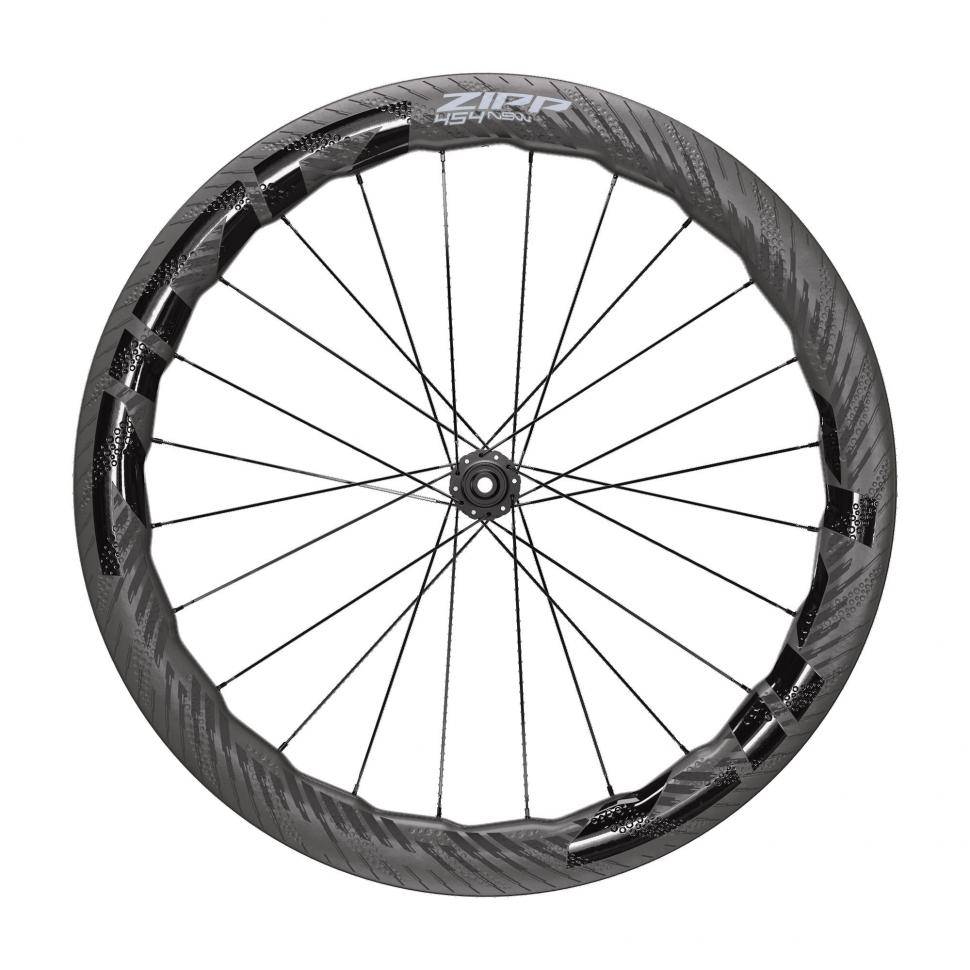 The 454 NSW Tubular Disc-brake features much of the same technology seen on the 454 NSW Tubeless Disc-brake (above) – including the undulating 53-58mm Sawtooth design – but with rims designed for tubular tyres.

“The 454 NSW Tubular Disc-brake wheelset brings together the advanced aerodynamics and stability of its biomimicry-derived Sawtooth rim profile with the benefits of disc braking,” says Zipp. “Now, the 454 NSW Tubular is even better with an improved hubset.” 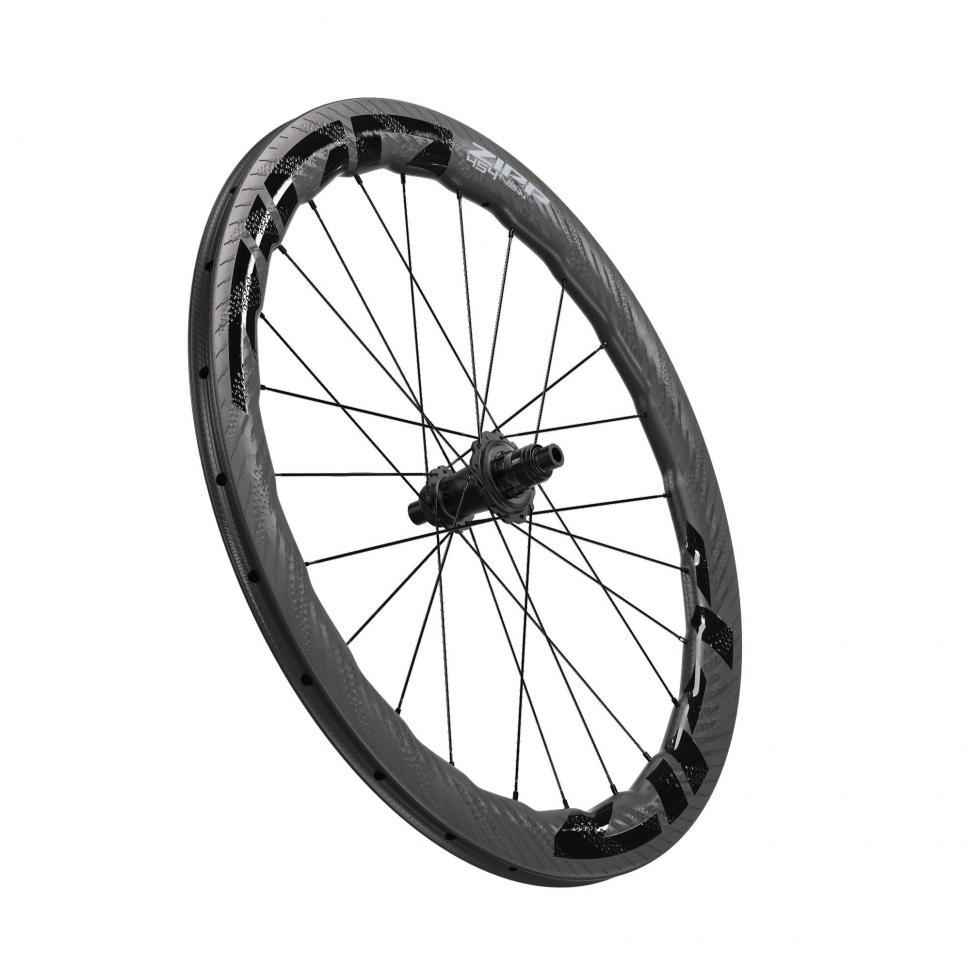 The hubset in question is the same Zipp Cognition DB V2 as used on the 454 NSW Tubeless Disc-brake wheelset. 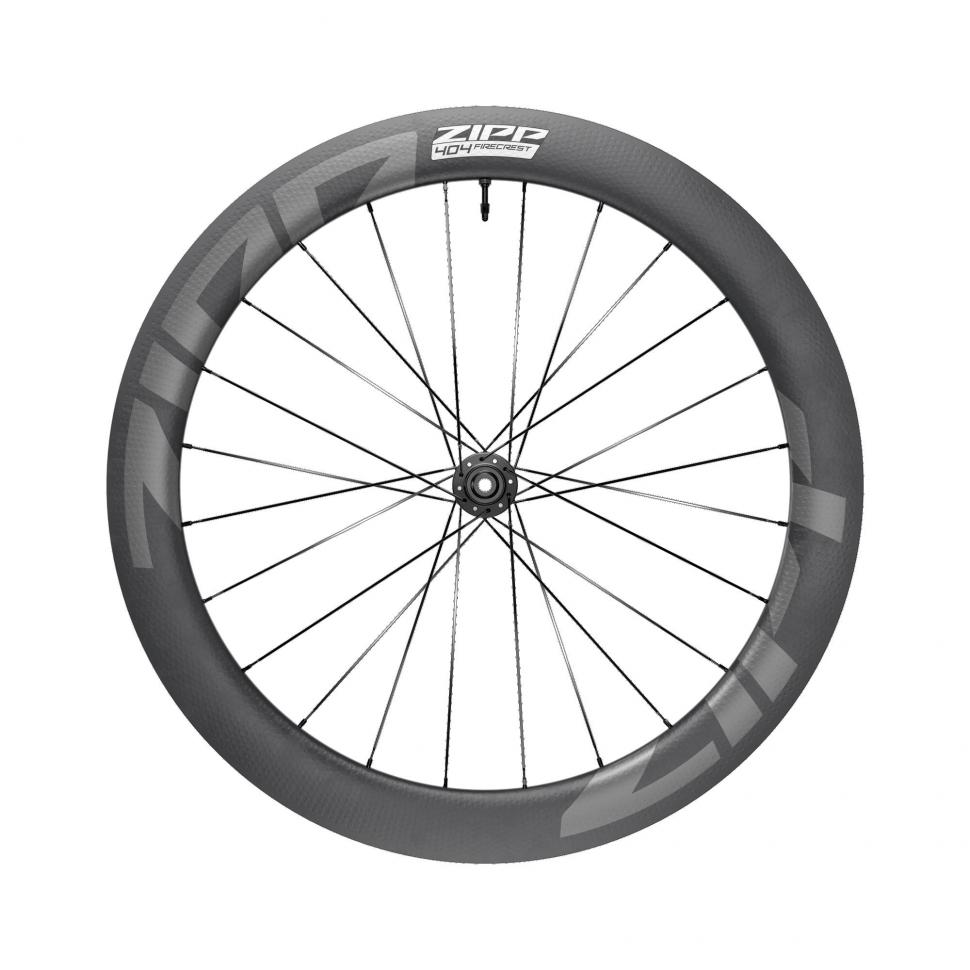 “At 58mm deep, the 404 Firecrest Tubeless is ideal for road races, time trial and triathlon, and gran fondos,” says Zipp. “The wheelset’s 23mm internal width [up from 19mm] is perfect for running wider tubeless tyres at reduced air pressure.”

Outdoor testing that Zipp had done by Aero Lab Tech says that a bike-and-rider system weighing 85kg (187lbs) on the new 404 Firecrest with 25mm tyres requires 286 watts to maintain a speed of 40km/h. That’s a 4-watt saving over the previous 404 Firecrest wheelset. 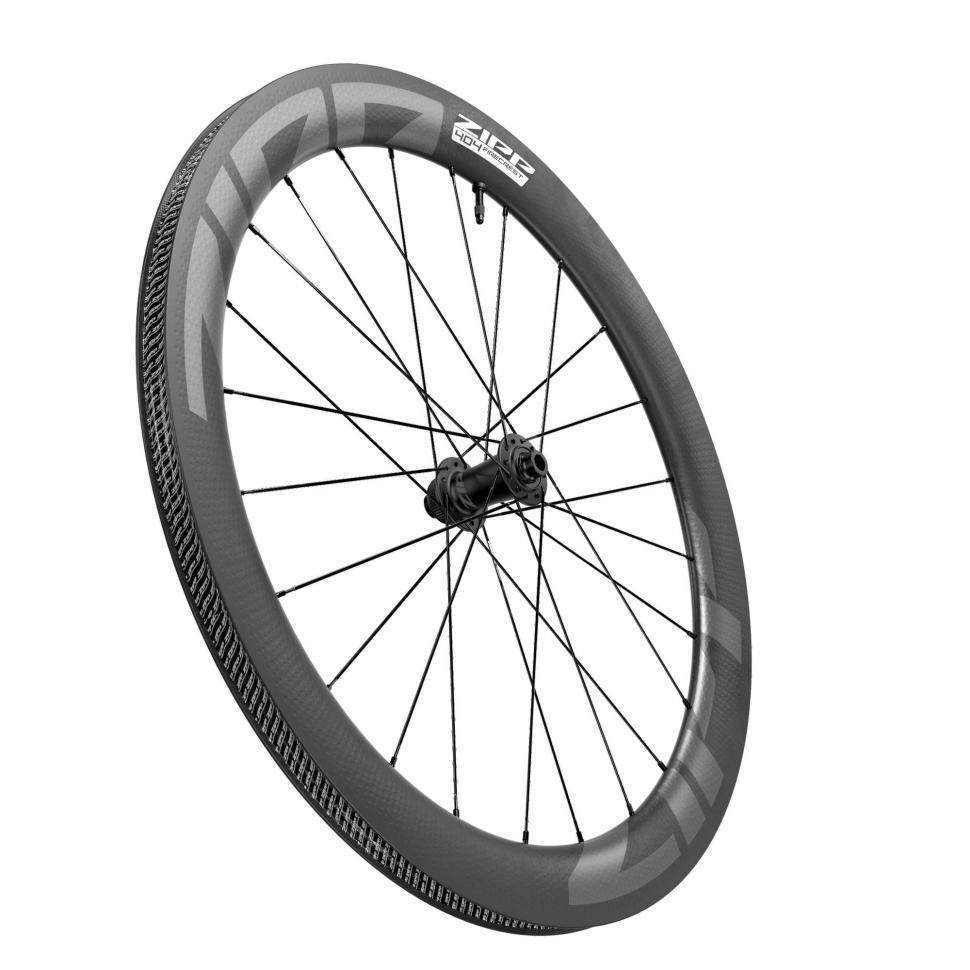 The 404 Firecrest Tubeless Disc-brake wheelset rolls on German-engineered ZR1 DB hubs that have an improved seal design. The freehub is six pawl (two groups of three with individual leaf springs) with a 33-tooth ratchet ring.

The 404 Firecrest Disc-brake wheelset is available with an XDR or SRAM/Shimano driver body, with a Campagnolo driver body sold separately. 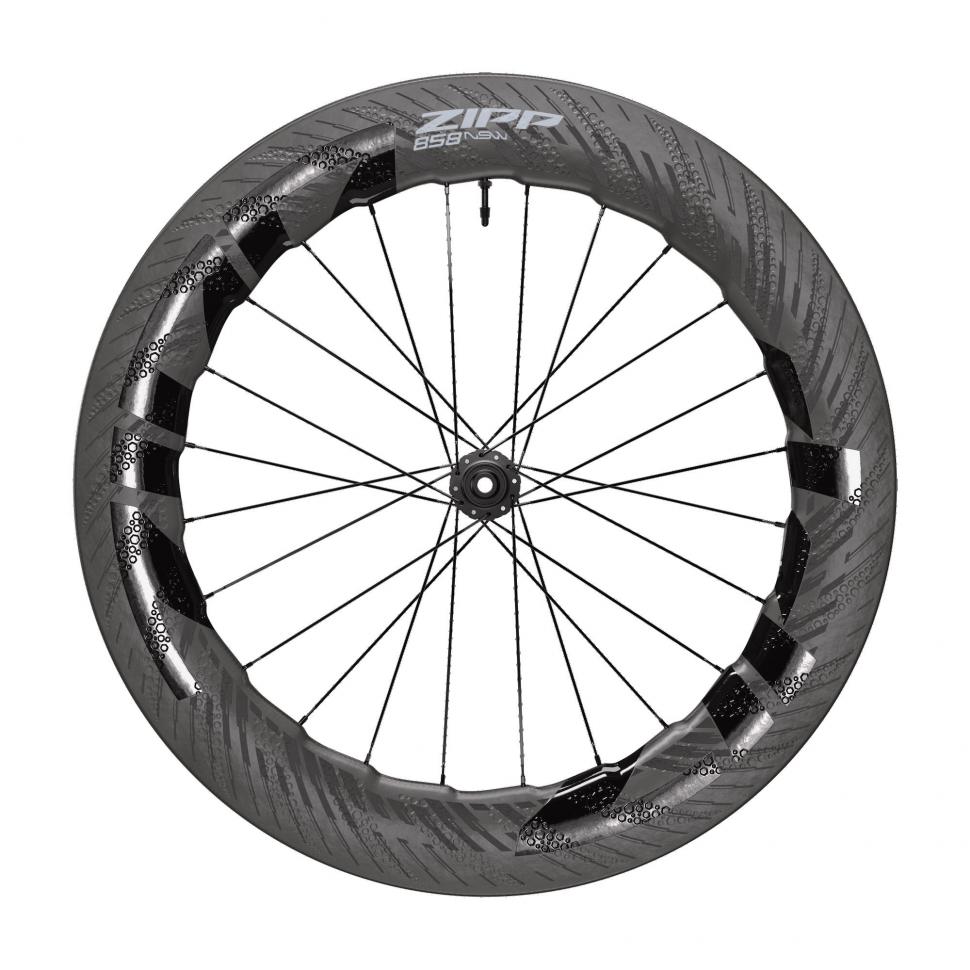 The final update is to the Zipp 858 NSW Disc-brake time trial/triathlon wheelset which gets the Cognition V2 hub (like the 454 NSW wheelsets above). 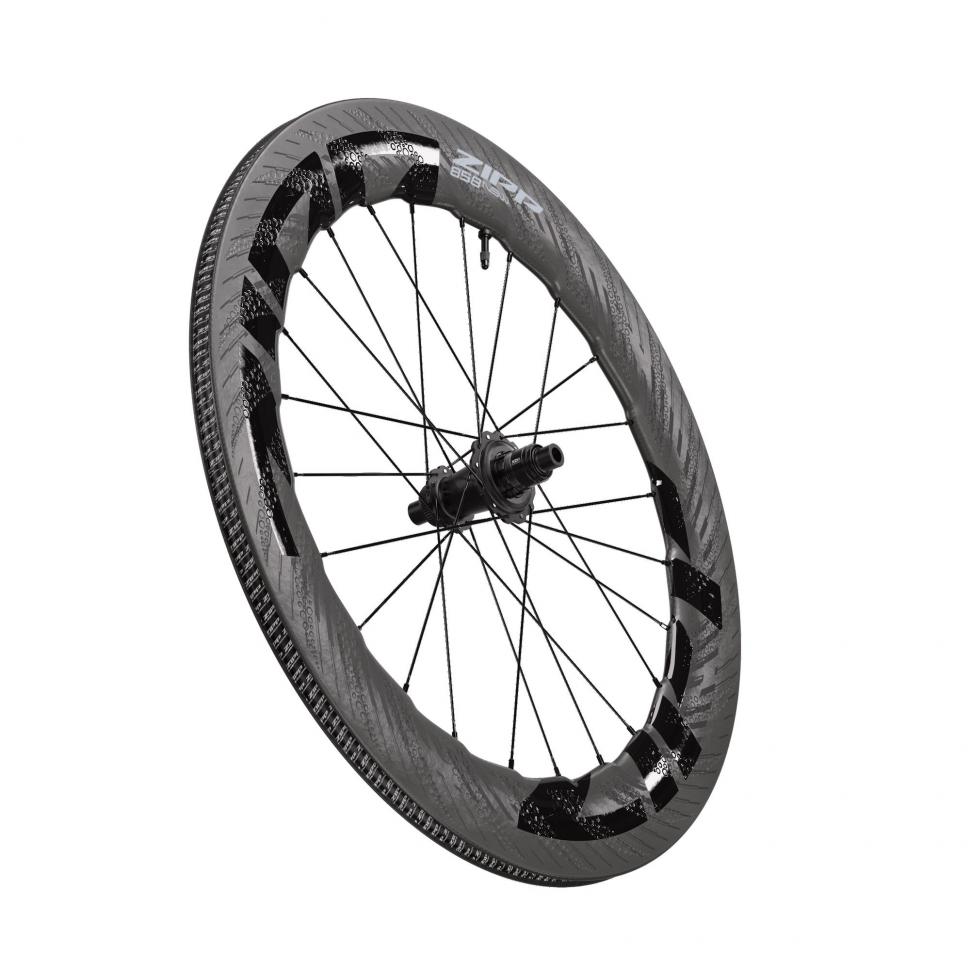