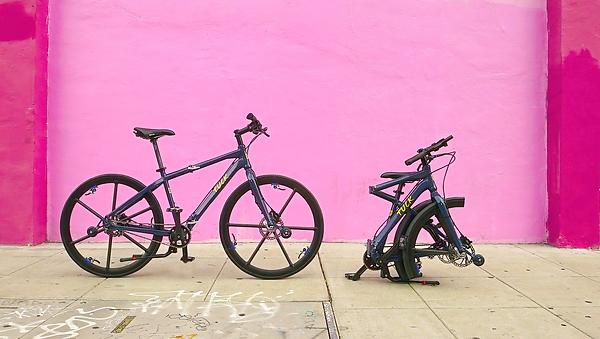 Would you ride this folding bike with folding wheels? The Tuck Bike with wheels that fold into thirds hits Kickstarter

Despite its full-size geometry, the new Tuck Bike manages to fit into small spaces thanks to its wheels that fold into thirds
by Anna Marie Hughes

Folding bikes have been around for ages now, with the likes of UK folding bike brand Brompton starting out way back in 1981. While Bromptons have 16-inch wheels, the new Tuck Bike - that has just been launched on Kickstarter - has full-sized wheels but still manages to fit into small spaces, as those wheels can be folded into thirds. 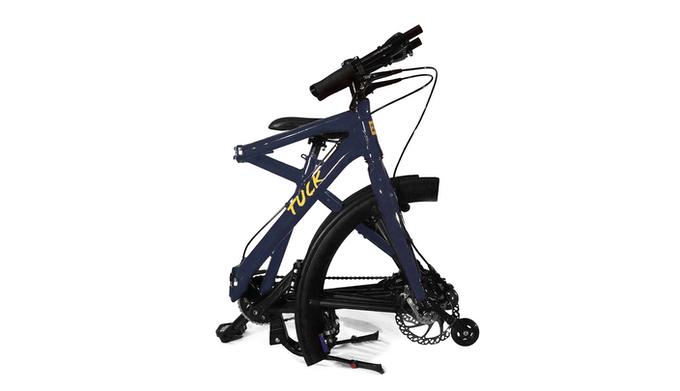 “[It’s] a full size bike that fits under your desk and is fun to ride whether you fold it or not,” say the Tuck Bike LLC team. 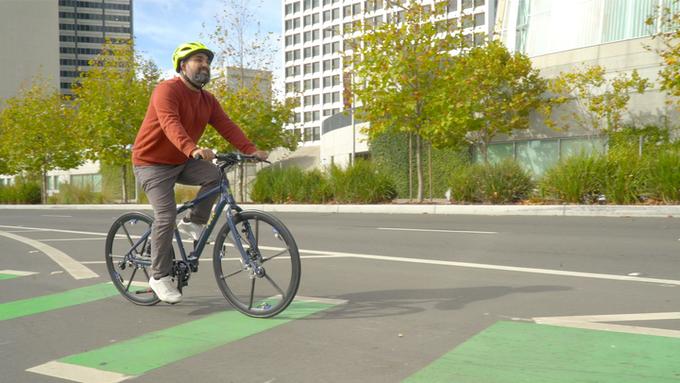 No tools are needed to fold the bike away, and there are three different folding options to choose from depending on whether saving time or saving space is more important.

The 'Curtsy' is the quickest option and best for temporarily storing the bike in a narrow hallway, for example - just fold down the handlebars. 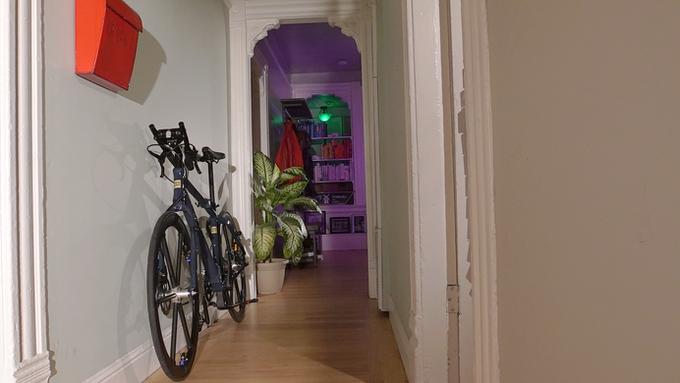 The 'Quickie' is the half fold, and this can be done in five seconds flat according to Tuck Bike. It reckons this is best suited to those rushing to catch a busy train. 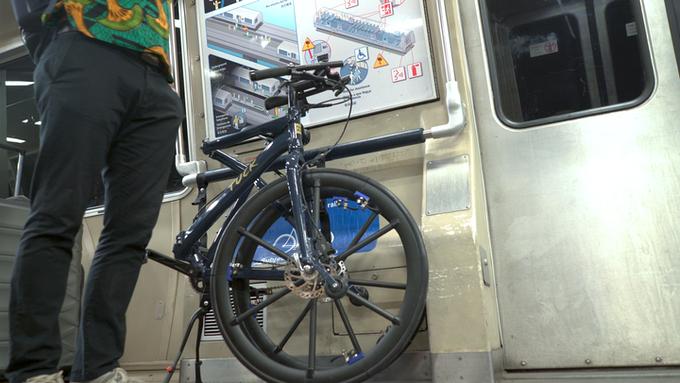 Finally there is the 'Full Monty Fold' which, according to Tuck Bike, can be achieved in less than two minutes. This is the method that folds the wheels away into thirds, and then these are tucked inside the frame.

Here’s a demonstration on how to complete the full fold within a 1 minute 21 second short video.

Tiny castor wheels are also attached to make it easy to transport the bike around when it’s folded away; the Tuck Bike can be rolled along as you walk about at your destination. Magnets should also hold the folded frame together. 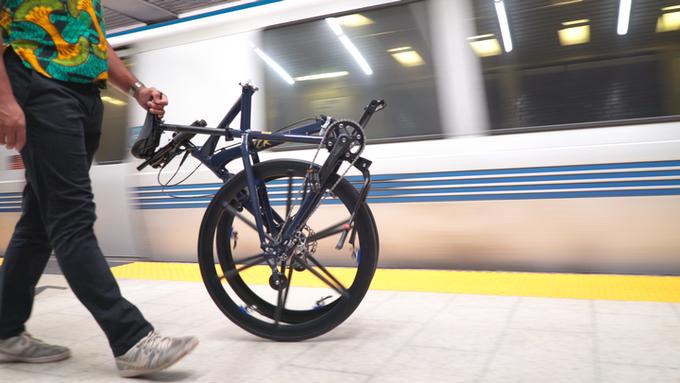 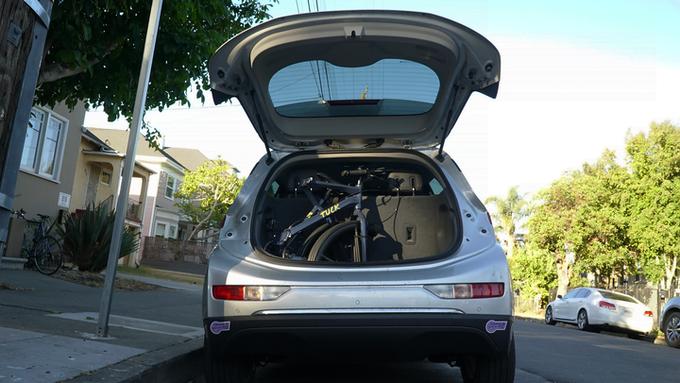 The most compact fold measures 26 x 16 x 34 inches (65 x 40 x 86cm), which is small enough to fit into the boot of a compact car, such as the Chevy Bolt hatchback pictured above, and also under the desk at the office. 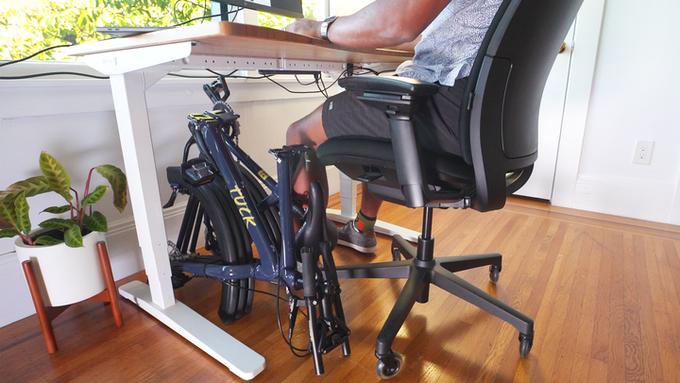 Tuck Bike acknowledges that you can get a small-wheeled folding bike that’ll fold up smaller, but with its offering you still get a compact bike that rides like a full-size urban bike.

Here are some photos showing how the 28-inch wheeled Tuck Bike compares to a 20-inch model. 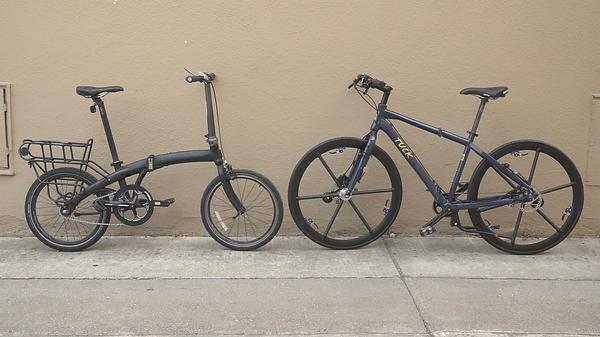 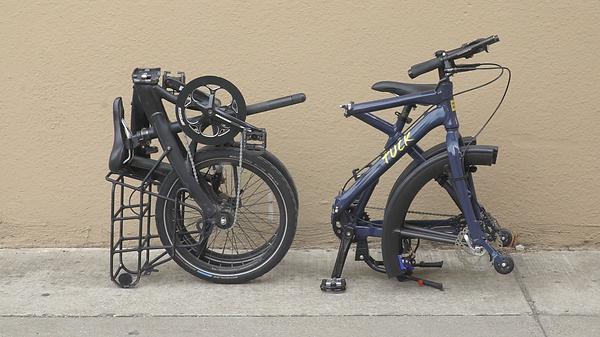 How do the folding wheels work?

The folding wheels are split into three equal parts. “We reinforced the rim at the ends and hold them together with wedge clamps, so the joints are actually the strongest part of the wheel,” Tuck Bike explains.

“Each third of a wheel is independently strong and true and when assembled together, they’re even stronger.

“There's a final clamp at the hub, and you need at least three clamps to open before any segment can fold.”

This design is definitely safe, claims Tuck Bike. “It’s passed comprehensive testing by an independent third party,” says the Tuck Bike team. “It meets the international standard for reliability (ISO 4210-7:2014) and the American Consumer standard (CPSC 16 CFR 1512.18 (j)), completing over 3/4 of a million impacts on a rolling road while overloaded and still going strong.”

The singlespeed folding bike is specced with 160mm disc brakes for coping with all sorts of weather conditions on commutes, and these are mechanical for easier maintenance.

Gecko Rubber foam tyres have been chosen for their puncture-proofness and these are claimed to last for over 4,000km. 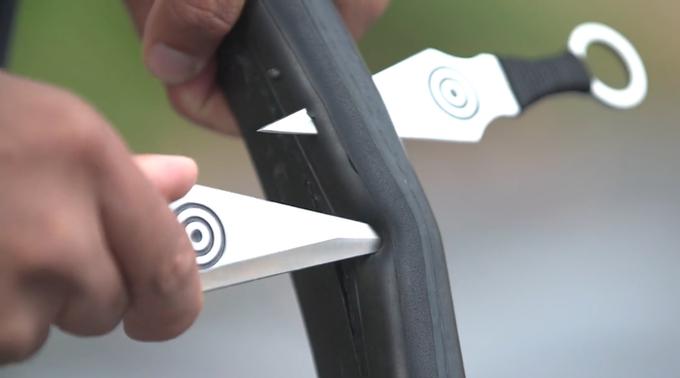 “The foam tyres mean you can fold and unfold the wheel without having to deflate or inflate,” adds Tuck Bike.

You can pledge at the Tuck Bike Kickstarter page over here if you like the look of it.