A German company called Titanum has launched double-sided 3D-printed titanium pedals called MyTi that weigh just 100g a pair. The startup says that its clipless pedals are suitable for road, gravel and mountain bikes and come with a low stack height.

The new MyTi pedal bodies and cleats are 3D printed from Ti-6Al-4V powder.

“Titanium (atomic number 22) is made in alloys that are nearly 2x stronger than typical strong aluminium alloys, and components made from Ti-6Al-4V saves about 40% weight compared to a steel equivalent,” Titanum explains. “Therefore, Ti-6Al-4V has a better strength-to-weight ratio than either, which aerospace and aviation industries often use to reduce weight but maintain strength.” 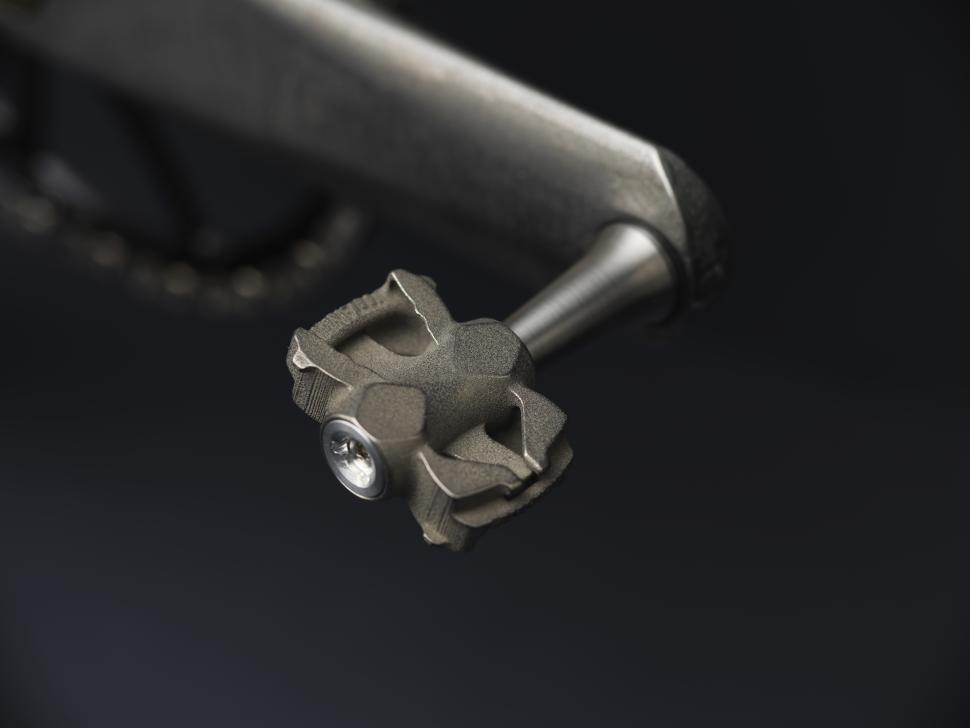 For easy clipping in, the startup’s patent-pending blade or leaf design, called Blattfeder technology, claims to combine the two steps of clipping in (sliding forward into a hook and pushing the cleat down) into a single motion to speed up the process and avoiding fumbling.

“Blattfeder technology refers to the horizontal ‘backstop’ spring that MyTi pedals use during clip-in. During clip-in, a so-called T-piece on the front of the cleat moves forward through a slot, and that pushes the blade spring down until a point whereupon the spring jumps back up in place. The blade spring then becomes a backstop that prevents the cleat from sliding backwards, to remain secured,” Titanum explains.

Titanum says it has integrated its Blattfeder backstop spring into a one-piece MyTi pedal body design. The pedals allow 6° of horizontal rotational freedom (float) while the cleat is retained, to keep your joints happy.

To unclip from the MyTi pedals, Titanum says you need to rotate your heel outwards less than on most clipless pedals.

Titanum says its system stack height of 7.8mm is the “world record for double-sided pedals”. This is achieved partly by using the inside diameter of the hardened titanium pedal bodies as a bearing surface.

Titanum is making three cleat variants, one for two-bolt shoes, one for three-bolt, and one for dedicated four-bolt shoes (using the two-bolt cleats with shoes with a recessed sole may require cutting or trimming a piece of the sole to clear the pedal axle).

More information can be found on Titanum’s Kickstarter page here.