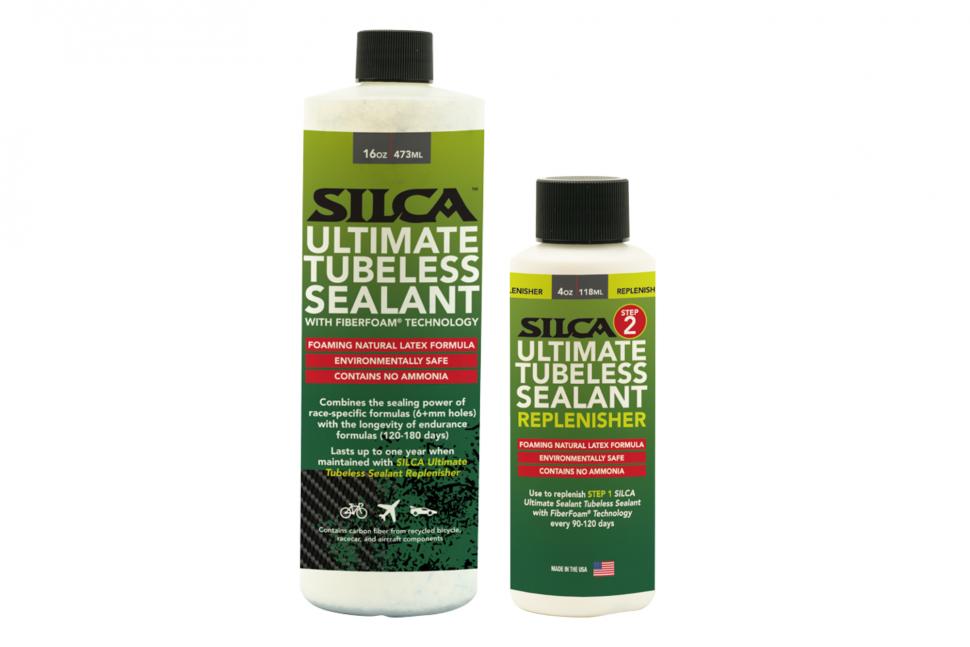 Silca has launched the new Ultimate Tubeless Sealant, which it claims delivers the sealing power of race-specific formulas thanks to its ability to seal up to 6mm holes, but also comes with the longevity of long-lasting formulas. Combined with a separate product called the Replenisher to top up the sealant every three to four months, Silca says you’ll only need to clean out your tyres and reset the wheels once a year with its new system.

> Should you get tubeless tyres? Are they your best option?

The Ultimate uses a foaming latex formula which, according to Silca, allows for the very lightweight carbon fibres to be evenly dispersed within the sealant while riding, for a higher fibre content than is possible with Kevlar or fibreglass.

This FibreFoam technology uses a mixed blend of 6mm, 9mm and 12mm long carbon fibres, which are claimed to be 400% stiffer than fibreglass.

Bundles of carbon fibres are carried directly to the puncture by the sealant flow where thousands of micro-bubbles collapse on each other, Silca explains, depositing the carbon fibres over the hole.

This dam of “high stiffness/high strength fibres” is claimed to have sealed holes in Silca’s testing up to 7.5mm, which is a claimed 25% larger than conventional technologies.

“Having the highest stiffness-to-weight and strength-to-weight ratio of any sealant additive, the combination of very light carbon fibres combined with foaming technology guarantee excellent, even dispersion throughout the sealant so that they can very quickly be carried to a puncture when it occurs,” Silca explains.

“The stiffness of these fibres means that they immediately begin bridging and damming the puncture as soon as it occurs, rapidly capturing subsequent fibers behind them as more sealant exits the hole.”

Using particles in sealant is common. Anything from glitter, to walnut shells to fibreglass can be used in sealants from other brands to lodge something into the hole, which helps slow the flow of sealant and promote sealing.

> Check out our sealant reviews

In its research, Silca says it found that using less solvent or anti-freeze tends to result in sealants that can seal larger holes, but these options also seem to dry out faster. Silca gives the examples of Orange Seal and Stan’s Race Day, which contain high latex/low solvent/anti-freeze percentages and high particulate loadings, giving them the ability to seal holes up to 6mm; but adds that the downside is that it's recommended these are replenished or replaced every four to six weeks.

When higher percentages of solvent/anti-freeze are used, Silca says the sealant tends to last from four to six months within the tyre, but claims the long-lasting formula sacrifices up to 50% of the puncture sealing ability.

To achieve what Silca claims is both fast sealing and long-lasting qualities, the Ultimate tubeless sealant solution is a two-part system. First off you’ll need the Ultimate Sealant, which features the FibreFoam technology, and this needs to be poured directly into the tyre when installing.

“The quick sealing power makes it impossible to use a syringe or through the valve stem,” Silca explains.

As the FibreFoam technology plugs valves, Silca has also created the Ultimate Replenisher. This is an altered version of the sealant that doesn’t contain any carbon fibres, and also has slightly higher anti-freeze percentage. It supplies fluidity to the existing sealant and, according to Silca, is capable of replenishing old sealant while also being “pumpable” through a syringe. > Fitting tubeless tyres – learn how with this simple guide

If you’re living in a temperate climate, Silca reckons you would need to use the Replenisher every three to four months, and if you’re in a humid and cooler climate this can be stretched out to every four to five months. As you can’t suck the sealant out through the valve with a syringe, other than following its schedule above, Silca recommends weighing the wheels as a guide to judge when it’s time to top the sealant up again with the Replenisher.

Silca has also aimed to be environmentally-friendly, as the carbon fibre pieces used have been reclaimed from recycled bicycles, carbon wheels, race cars and aircraft components.

Cost and how much you need

If you buy the eight ounce bottle of the Ultimate Sealant that’ll cover you for setting up two sets of road wheels with tyres from 23mm to 30mm.

The Replenisher costs £12 for four ounces and so for across the year you’ll need nine ounces which equates to three bottles (£36).

Silca does have a subscribe and save option on its site for those committing to the system.

Is the Ultimate sealant really as effective at sealing holes as Silca suggests? And does it last that long too? We’ll be getting some to test out these big claims, so stay tuned…