Helmet technology brand Livall has widened its range of smart cycling helmets with the new Evo21 that has built-in indicators, 270 degree rear lighting, an SOS alert system and 30% more venting areas than before. 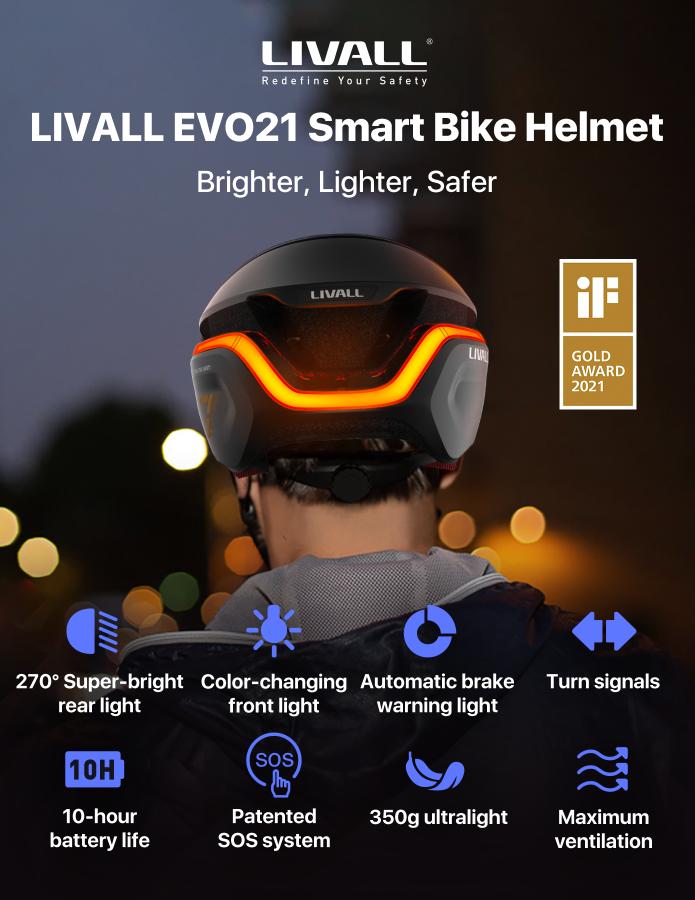 This isn't the first cycling accessory with indicators built in and won't be the last; and, as detailed by our own John Stevenson in this opinion piece from 2017, it's a product category that has tended to divide and hasn't always been successful. Livall, though, is now pretty well established and says it's new helmet tech is a cut above the rest:

“Built for the commuter and cycling enthusiast, the Evo21 presents an innovative design which incorporates the very best next-generation technology into a stylish smart helmet that leads the way in road visibility”, says Livall.

Indicative lighting at the front and the back of the helmet is said to alert surrounding traffic of the cyclist’s intentions. Livall explains: “The Evo21’s turn signals operate the same way a car or motorcycle does, with super bright LEDs that signal your turn to drivers at the press of a button.

“A remote on your handlebar communicates wirelessly with the Evo’s smart LEDs.”

Livall’s patented SOS feature is also included. “The three-axis G-sensor integrated into the helmet will sense an increased acceleration or deceleration followed by a lack of movement and trigger an emergency SOS alert which will be sent to your emergency contacts via SMS (set up in the app) automatically,” says Livall.

The Evo21 has an integrated 270 degree rear light and a wide-angle front light, with a 45 degree reach, to increase visibility if you lower your head while riding to, for example, look at your navigation device. The LED lights feature auto-brightness adjustment for increased battery life —a total of 10 hours is promised.

IPX5 waterproof, Livall says, “the Evo21 can not only deal with moderate rain with ease, but can also survive heavy rain”.

The Evo21 also comes with a sunglasses holder, an SOS handlebar remote and a smart on/off design.

Even with all these features built in, the helmet still comes in at a reasonable weight of 350g (claimed).