Whether for good or ill (clue: for good), e-road bikes are becoming more and more popular. And the latest one to be left outside the road.cc office door while the courier runs away – that’s how deliveries work now, right? – is the Canyon Endurace:ON, which is Canyon’s first e-road bike and is yours for a cool £2,799 As it’s called the Endurace:ON you’ll not be surprised to learn that the bike is based on Canyon’s well-regarded Endurace geometry. The Endurace is a sportive bike, a bit more upright than the racier Ultimate, and a good choice for a do-it-all e-road machine. Into that frame Canyon has shoehorned the Fazua Evation drive system, which is one of the most common motor systems for e-road bikes. And for good reason: it gives useful power, it’s inconspicuous and it’s reasonably light at less than 5kg. The Endurace:ON tips the scales at 15.1kg, which is good for the money, and light enough to make it a reasonable prospect without power. And it needs to be, because like all EU-standard e-bikes the Endurace:ON will stop assisting you when you creep over 25km/h. And on a road bike that’s the kind of speed you can easily keep on the flat.

> 16 of the best electric road bikes

Once you hit the hills is where the power will really help. The Fazua system has a 250W rating but the peak power is above that, at 300W. There are three levels of assistance, and you can configure them through the Fazua app so they’re tuned to your particular style of riding. The Endurace:ON is the first production bike to get the Fazua motor with the new Black Pepper firmware update, which Fazua claims makes the motor more responsive and better at the higher cadences you might see on a road ride, all the way up to 120rpm. Canyon has opted for a single ring transmission: it’s using Shimano’s excellent GRX mechanical groupset with a 48-tooth chainring and an 11-42 cassette at the rear. With the motor on board too that should give plenty of gears for even the steepest stuff. Shimano’s hydraulic discs take care of the stopping down the other side, with the rear rotor beefed up to 160mm to help with slowing the slightly bulkier bike down. Finishing kit stretches to a carbon seatpost – though not Canyon's excellent VCLS2.0 leaf spring one – and the rest is good quality alloy kit, with some reasonably heavy but dependable wheels finishing off the bike shod with 32mm Schwalbe E-One tyres.

> Buying an electric bike: everything you need to know 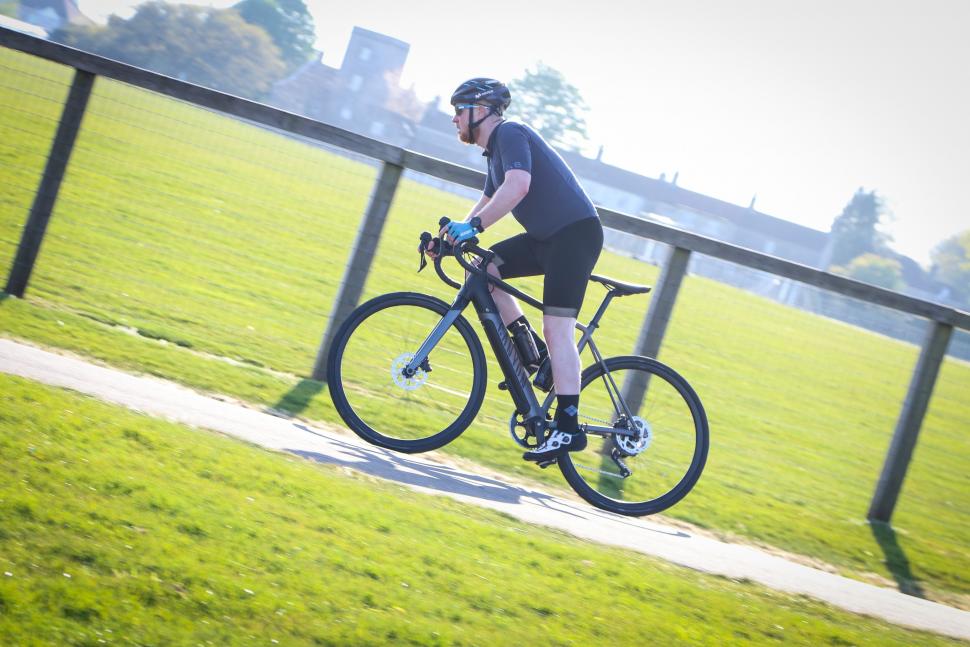 We’ve handed over the bike to Jack for testing and he’s busy being all socially distanced on it, so watch out for a review on road.cc soon.